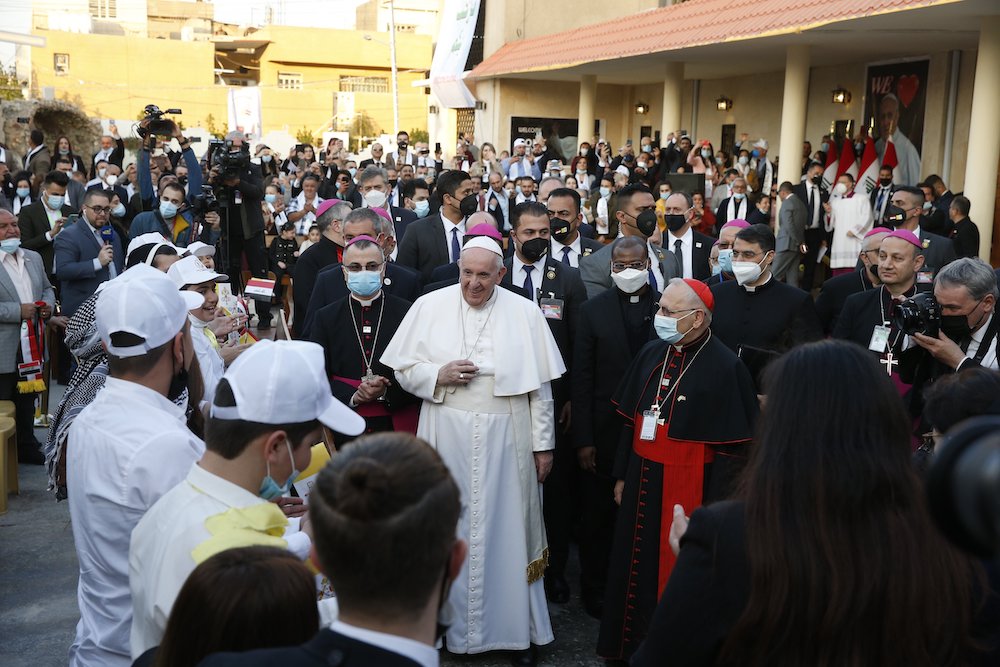 By any measure, Pope Francis' March 5-8 trip to Iraq, the first of a Catholic pope to that country, was historic. One need only glance at the image of the pontiff standing among the sand-colored rubble of the remains of the four churches in Mosul, so cruelly destroyed under the brutal Islamic State regime, to grasp the significance.

Here, in the very spot of such barbarity, was made a moment of hope and basic decency. It may well mark rebirth for a Christian community that is one of the world's oldest but has faced extinction after hundreds of thousands fled the so-called Islamic State militants.

Of course, the suffering of the Christian community in Iraq predates the onslaught from Islamic State (ISIS) group terrorists. We Americans bear a great deal of responsibility for the flight of Christians from that country and the region because of our misguided invasion in 2003. That invasion destabilized the entire country and left minority groups like the Christians, the Kurds and the Yazidis at the mercy of the power vacuum left by the civil strife. And, before that, there was the barbarism of the fascist dictator Saddam Hussein.

Francis' predecessor, St. Pope John Paul II, begged the United States not to invade Iraq in 2003, predicting that destabilization might make the already grim situation worse. He sent Cardinal Pio Laghi as a personal emissary to try and persuade President George W. Bush not to launch the invasion, but Bush's advisors promised U.S. troops would be greeted as liberators and they would be home in six months. Yet we have still not extricated our military from the country, and the destabilization laid the groundwork for years of civil strife and, ultimately, the ISIS terror. Almost two decades of violence and poverty has been the result of the American invasion.

Francis could not heal the wounds, but he could and did demonstrate solidarity with the victims. In the best tradition of the pontiffs since the Second Vatican Council, Francis made stirring cries for peace, tolerance and interfaith cooperation.

This is what makes the wizard behind the curtains all the more infuriating. Despite repeated assurances by the Vatican and local organizers that the trip would be held in a way to minimize possibility of the spread of the coronavirus, with smaller crowds, social distancing measures and masking, it just clearly wasn't.

The March 6 Mass at Baghdad's St. Joseph Chaldean Catholic Cathedral was a particularly egregious example. It featured about 250 people gathered in a closed space. Although most wore masks, they were singing and were seated less than 6 feet apart in a warm sanctuary with almost no ventilation. Simply put, it was a coronavirus boiler room. 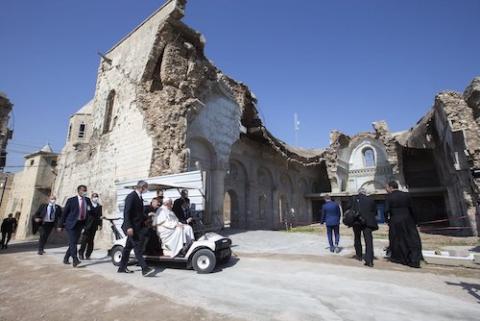 The March 7 gathering at the Al-Tahera Syriac Catholic Church was similar. It didn't feature singing, but mask wearing was much less observed.

With all the Iraqis have gone through, it is understandable if the coronavirus is the least of their concerns. The Vatican, however, has been witness to the devastation wrought in Italy and knows well the impact a spike in infections could have on an already fragile healthcare system.

Francis said during his March 8 press conference on the flight back to Rome that he had prayed about whether to make the trip during the pandemic and said he was "aware of the risks." He said he felt the decision to go come, after prayer, "from within."

"In the end, I took the decision, freely," the pope explained. "I said: 'The one who allows me to decide this way will look after the people.' "

Far be it from us to second-guess the pope's discernment. If anyone has a claim to hearing God's voice, it's surely him.

But at the very least, the pope's modeling of a visit like this as the pandemic enters a third, cruel wave in parts of the world, is lamentable. With everything we know about how quickly the virus can spread in tight, enclosed spaces, it could become tragic. The pope and his entourage had the privilege of being vaccinated. The Iraqis didn't.

Francis says he was aware of the risks. We're left unsure about the consequences.

This story appears in the Pope Francis in Iraq feature series. View the full series.
A version of this story appeared in the March 19-April 1, 2021 print issue under the headline: Pope's trip shows shocking disregard for pandemic.