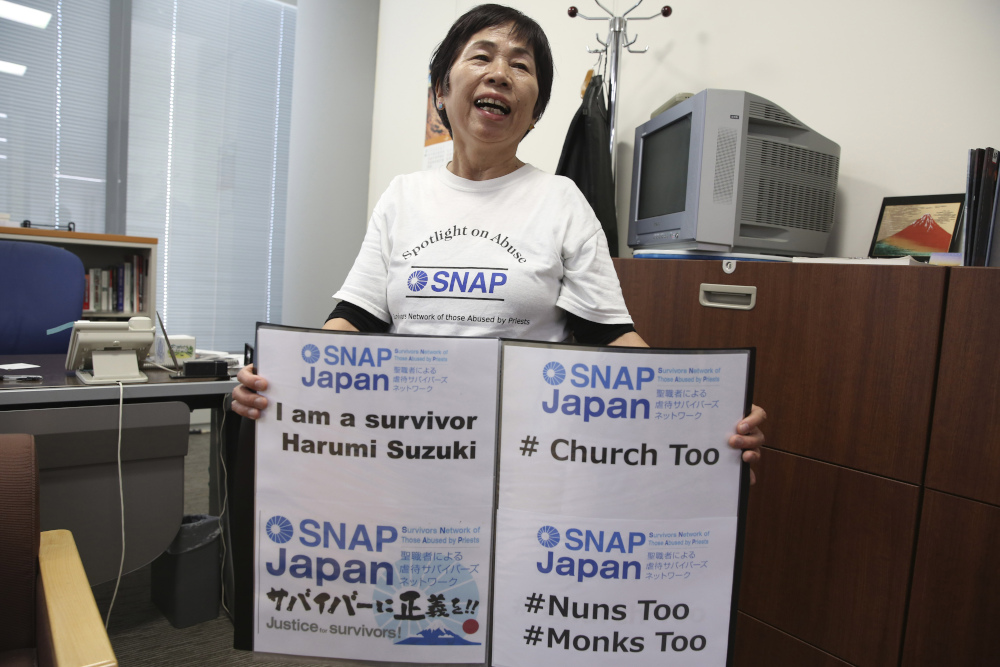 In this Nov. 25 photo, Survivors Network of Those Abused by Priests (SNAP) Japan local leader Harumi Suzuki holds signs while speaking during an interview with The Associated Press in Tokyo. (AP/Koji Sasahara) 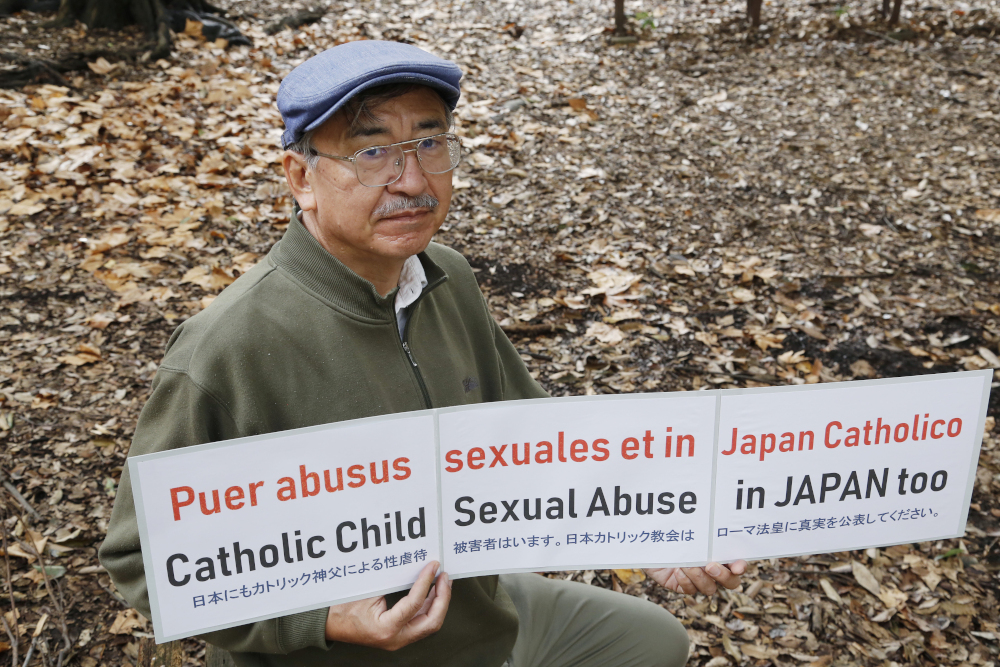 In this Dec. 10 photo, Katsumi Takenaka holds a protesting banner during an interview with The Associated Press in Tokyo. (AP/Yuri Kageyama)

During Pope Francis' recent visit to Japan, Harumi Suzuki stood where his motorcade passed by holding a sign that read: "I am a survivor."

Katsumi Takenaka stood at another spot, on another day, holding up his banner that read, "Catholic child sexual abuse in Japan, too."

The two are among a handful of people who have gone public as survivors of Catholic clergy sexual abuse in Japan, where values of conformity and harmony have resulted in a strong code of silence.

But as in other parts of the world, from Pennsylvania to Chile, Takenaka and Suzuki are starting to feel less alone as other victims have come forward despite the ostracism they and their family members often face for speaking out.

Their public denunciation is all the more remarkable, given Catholics make up less than 0.5% of Japan's population. To date, the global abuse scandal has concentrated on heavily Catholic countries, such as Ireland, the U.S. and now, many countries in Latin America.

All of which could explain why the Catholic hierarchy in Japan has been slow to respond to the scandal, which involves not only children being sexually abused but adults in spiritual direction — an increasingly common phenomenon being denounced in the #MeToo era.

In a recent case, police were investigating allegations by a woman in Nagasaki, the region with the greatest concentration of Catholics in Japan, that a priest touched her inappropriately last year.

Japanese media reports said the woman had been hospitalized for PTSD. Police confirmed an investigation was underway but the church declined to provide details, citing privacy concerns.

The Catholic Bishops' Conference of Japan launched a nationwide investigation into sexual abuse of women and children this year, responding to the Vatican's demand for an urgent response to the global crisis.

The results haven't been disclosed, and it's unclear when they might be ready. Similar studies have been carried out by the U.S., German and Dutch churches, with the findings made public, and government-mandated inquiries have devastated the church's credibility in countries like Australia and Ireland.

The Japanese bishops' conference has said it carried out various investigations since 2002, but the names of the accused, the nature of the allegations or any other details have never been released.

Broadcaster Japan News Network said 21 cases were found in the latest investigation. The conference declined to confirm that number. It's unclear whether that includes decades-old cases like Takenaka's and Suzuki's.

In a rare case of the church taking action, Takenaka received a public apology earlier this year from Nagasaki Archbishop Joseph Mitsuaki Takami for the sexual abuse he suffered as a child at the Salesian Boys' Home in Tokyo, where he was placed after his parents' divorce.

"I think his apology was sincere in his own way. But the response has lacked a sense of urgency, and there is no sign they will take any real action," Takenaka told The Associated Press.

Takenaka's alleged perpetrator was a German priest, who he said initially took off the boy's clothes to examine bruises from beatings he suffered from other boys at the home. The priest's examinations escalated to fondling and other sexual acts, which went on for months until the priest was transferred, he said. He reported that the priest told him he would go straight to hell if he told anyone, and gave him candy and foreign stamps.

Takenaka identified his abuser as the late Fr. Thomas Manhard. The Salesians in Munich confirmed Manhard had worked in Japan from 1934-1985, when he returned to Germany. He died a year later. Spokeswoman Katharina Hennecke said the order had no information in its records about allegations against him.

Takenaka's account was confirmed by the Fr. Hiroshi Tamura, who runs the Salesian Boys' Home and said he was conferring with the Japanese bishops' conference to work out a response to his claim.

Takenaka, a civil servant in his 60s, said the church needs to be proactive in disclosing details about the abuse it has uncovered, identifying offending clergy and how they were penalized. He said an outside investigation is needed and a forum for victims to come together.

"The victims are isolated," Takenaka said. "No one knows for sure if the abuse is still going on."

Francis has emphasized the global nature of the abuse problem, summoning bishops conference leaders from around the world to the Vatican this past February and passing a new law requiring all cases be reported to church authorities.

But he didn't refer to the issue during his trip to Japan, focusing instead on messages on nuclear weapons and nuclear disasters.

Both Takenaka and Suzuki said they had relayed requests to meet with Francis but got no answers.

"I am filled with sadness and I am filled with outrage," said Suzuki, who wept as she told her story of being sexually assaulted by a Japanese priest in northeastern Japan in 1977.

Suzuki represents the Japan section of the American organization SNAP, or the Survivors Network of those Abused by Priests, which supports victims of religious authorities.

"I want my dignity back, and I felt I had to act," she said.

She said a few other victims in Japan have contacted her. Takenaka and Suzuki talked by phone for the first time recently, although they have yet to meet.

Suzuki, a nurse, says she was assaulted when she went to a priest for help about the domestic violence she was suffering at the hands of her husband, and other personal problems.

She says she had no expectation the priest would try to have sex with her, and wasn't sure she even had a choice. She remembered he whispered into her ear, "You won't regret this?" and then lifted her up in his arms and carried her upstairs to a bed.

"I could not run away or scream," she said, adding that the naked priest was on top of her before she really knew what was happening.

"I did not ask for sex," she said, adding that she has suffered flashbacks, depression, as well as blackouts about how even she got home that day.

Documents seen by The Associated Press show the Sendai diocese carried out an investigation by a third party of lawyers into her case in 2016.

The investigation determined the sexual act likely did happen but decided no criminal or civil responsibility could be pursued, given the passage of time and that the priest may have thought the act was consensual.

Suzuki denies she consented, and said she remains so terrified she can't go into a church anymore.

"My whole world was turned upside down," she said.

"The victims are isolated. No one knows for sure if the abuse is still going on."

Sendai Bishop Martin Testuo Hiraga, who has frequently met with Suzuki, said a solution was not easy. He said the priest denied there was any sex between them at all.

The Catholic hierarchy around the world has largely ignored the problem of adults — seminarians, nuns and laypeople — who are sexually abused by clergy. Yet there is a large body of research that shows that adults can be sexually victimized by clergy because of the power imbalance in the relationship.

A priest can easily take advantage of a parishioner during spiritual direction or in times of personal crisis, such as when a woman has come for help because she is being abused by her husband, since she is in a vulnerable state, these experts say.

The late Diana Garland of Baylor University has argued that women often come to realize they were victims of abusive clergy only when they are asked if the sex would have happened if the pastor was her neighbor. "Overwhelmingly the answer is 'no,'" Garland wrote in 2006. "As she says no, she begins to face the truth that he had power and authority that made meaningful consent impossible for her."

In addition to Takenaka and Suzuki, several victims have spoken out against the religious brothers at St. Mary's International School, a prestigious all-boys parochial school in Tokyo, alleging they were raped or molested decades ago.

The school carried out an investigation, starting in 2014, and denies any abuse is ongoing. There have been no criminal or civil cases at St. Mary's.

Takenaka said he decided to confront the problem of abuse in the Japanese church, demanding answers from the hierarchy and helping sexual abuse victims precisely because he still believes in God.

If he became a bigger person, his emotional scars would seem small in comparison, he said.

But he remembered during Christmas Eve Mass last year, he asked in his prayers:

"On which side is God's justice on?"