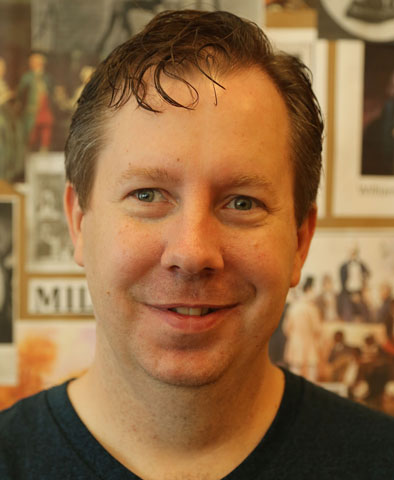 Christopher Smith had never heard of John Newton when, with a little time to spare, he casually browsed through the children's section of a library in Fort Washington, Pa., looking for inspiration for his church youth groups.

The police officer and religious education director had no idea that chance experience of "literally just killing time" would be his life-changing moment, one that would lead him from small-town life in Bucks County, Pa., to the Great White Way.

Smith was fascinated by the story of Newton, the 18th-century British slave trader who was shipwrecked, enslaved, then found religious conversion and new life as an Anglican cleric and outspoken abolitionist. Smith was so captivated by the story that it wasn't until later he realized that Newton had penned one of the world's most beloved hymns, "Amazing Grace."

Although Smith didn't have a theatrical background, and despite the fact that he can't read a single note of music, he felt called to dramatize Newton's life.

That was in 1997. On Oct. 19, "Amazing Grace" will open in a world-premiere run at the 1,800-seat Bank of America Theater in Chicago before heading to Broadway next year.

Although the 17 years between that first sense of calling to the actual opening night have been hard at times -- writing, rewriting and rewriting some more, putting together readings, auditioning actors and raising the nearly $15 million needed to mount a show on Broadway -- Smith, who admits he is not a patient man, sees now that the timing might be just right.

"The world seems to be taking a turn to the dark end," he said, adding that the 1700s of Newton's day were also filled with violence and cruelty. "There's bad news all over the world, not just in one place. Things seem to be spinning out of control. I'm hoping that all the delays that brought 'Amazing Grace' to this point make it shine brighter at a time when people need to be challenged and empowered and uplifted."

Back when a musicalization of Newton's life was still just an idea, Smith mentioned it to Rich Timmons, a member of his church. Timmons, who owned a marketing firm in town, immediately saw potential in telling a story that had gone untold, at least dramatically, for more than 200 years. "Amazing Grace" also happened to be his favorite song.

"He said, 'If you put it in a form I can use, I will take it to every business owner in town,' and he did," Smith said.

Timmons raised a half-million dollars in three months, and went on to raise another half. With that money, Smith was able to quit his job and devote full time to writing and fundraising.

By October 2007, he was ready to gauge audience reaction. For the first public concert/reading, he put together a cast headed by Adam Jacobs as Newton and Ali Ewoldt as his love interest, Mary Catlett. Jacobs and Ewoldt were on Broadway at the time playing Marius and Cosette in the revival of "Les Misérables." They spent Oct. 15, 2007, at Hilltown Baptist Church in Bucks County, rehearsing for that evening's concert, backed by a 60-member choir of area high school students.

Smith had hung only two posters, each in an area church, announcing the free concert, and "word of mouth just exploded around Bucks County." On the night of the event, more than 1,200 people showed up, requiring Smith to set up two overflow rooms with speakers and screens.

At the end of the concert, the actors asked the audience to stand and led them in singing "Amazing Grace." It was a powerful experience that left many in tears.

"People were coming and bringing all their pain and struggles," Smith said. "I thought, 'I have two and a half hours when our paths will cross.' I wanted to honor that. My purpose shifted from just wanting to write a good show to wanting to live up to what we can do in people's lives."

Following the Hilltown success, Smith hired veteran New York producer Carolyn Rossi Copeland. She raised the rest of the money to fully capitalize the venture. Now all that stands between the show and opening night on Broadway is having the right size theater become available.

Copeland put together an experienced team that includes Gabriel Barre as director and Tony Award-winning choreographer Christopher Gattelli. Arthur Giron helped shape the show's book with Smith, and Smith wrote the music and lyrics for the 17 songs, as well as the incidental music. Three-time Tony winner Eugene Lee has created the sets, which in many cases, such as for the ship and its sinking, will be conceptualized. Tony nominee Josh Young plays Newton and Erin Mackey is Catlett, heading a cast of 34.

Smith developed his script largely from library research. While some characters have been consolidated and others invented, the story runs close to Newton's life and times, he says. Three period consultants have given advice on the manners and gestures of the 1700s and on dialects, and have provided translation for the African scenes.

The show "doesn't pull any punches," Smith said. "We're not afraid to show the depths of the struggle. We wanted to make sure we never gloss over what slavery was as much as we can onstage."

But it's not an "issue musical," Smith emphasized.

"It's an action/adventure/romance with deep character struggle. We don't want to tell the audience what we think they should get out of it," Smith said. "We want to present the story with honesty and in a forthright way, and let the chips fall where they may."

[Retta Blaney is the author of Working on the Inside: The Spiritual Life Through the Eyes of Actors.]

A version of this story appeared in the Sept 26-Oct 9, 2014 print issue under the headline: 'Amazing Grace' portrays hymn's writer.