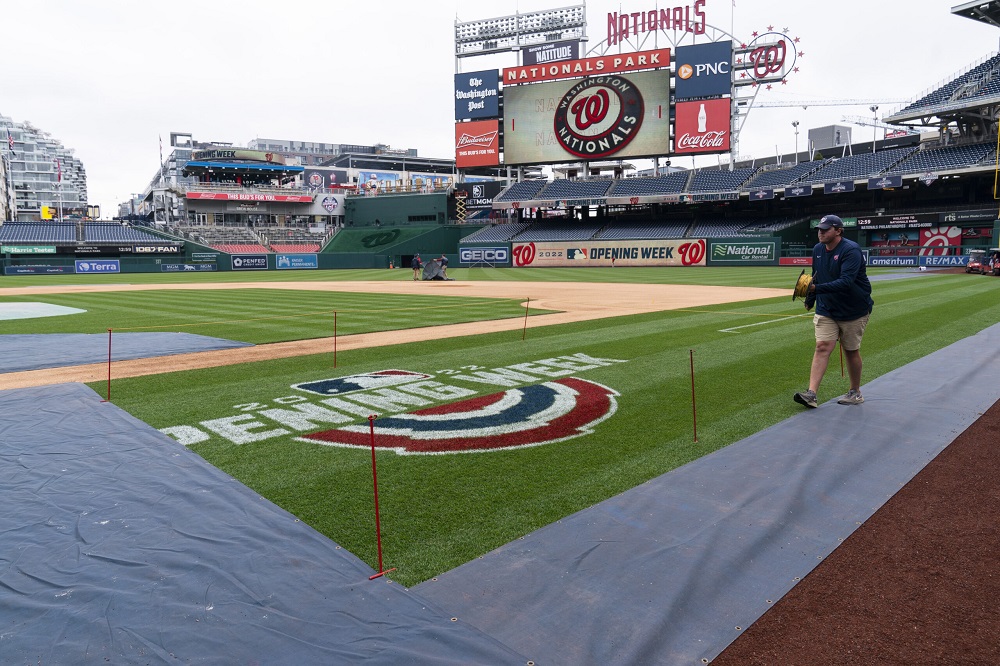 A member of the grounds crew ropes off the on-field logo before baseball workouts at Nationals Park, April 6, in Washington. (Alex Brandon/AP)

Slightly delayed by labor negotiations, another Major League Baseball season opened this week. While in the academy it's common to hear theses about sports as a folk religion, the most salient connection between religion and baseball is their increasingly tenuous status as honored institutions in American life.

Faith and the nation's pastime do have elements in common, of course: Both carry forward tradition to give meaning to the present. Both are firmly rooted in physical reality yet always point to the the unseen, the improbable and even the impossible. Their inherent order is punctuated by moments of ecstasy.

For me, baseball fandom even has Scripture of a sort: Ken Burns' 1994 documentary "Baseball" has brought me back to the game multiple times over the years. The nine episodes, which began dropping a month into the players' strike that had canceled that season's World Series, marked my transition from a player (Little League) to a spectator. Baseball movies of the era — from 1988's "Bull Durham" to the mid-'90s "Angels in the Outfield" — emphasized the emotional and redemptive qualities of the game. Burns added a deep measure of history that gave my barely adolescent self a new reverence for the game.

He also showed quite plainly that baseball's greatest days were in the past.

Religion, too, we are told, is on the decline. Last year, Gallup reported that membership in a faith community in the U.S. had fallen below 50% for the first time in the survey firm's history. Children are less likely to be raised religious than in past generations. Immigration may stem the decline somewhat, but the more devout age cohorts are dying off.

To make itself seem more relevant, religion is tempted to evolve: contemporary music, relaxed sexual standards, easier alliance with one political party or the other. But innovations meant to attract newcomers are considered by the old guard as impure, even heretical or just tacky.

Baseball's struggles are not so different. From any accounting of popularity, market share or American cultural dominance, baseball seems to be in decline. Whereas 25 million people used to tune in to watch a World Series game in 2003 on average, only 8 million watched in 2019. While all sports viewership has struggled of late, the NFL drew more than 100 million to its championship game this year. As with religion, immigrants and minorities will help: The growing number of Hispanic Americans, the most avid fans, will help, but the game's popularity is not likely coming back.

Numerous rule changes have been proposed and implemented, ostensibly to make games quicker and more exciting: seven-inning doubleheaders, a pitch clock, starting extra innings with a runner on second base and, new for 2022, the use of the designated hitter in the National League. But older die-hard fans often find such innovations to be degradations of what makes baseball so special.

The reasons for baseball's slide, however, go deeper than these innovations, aimed at increased media competition, can solve. More than most sports, baseball depends on fathers teaching it to their sons, but with more broken families and fatherless children than ever before, far fewer children are playing baseball. Even in families that are intact, the younger, digitally native generation trusts its own superior knowledge of technology above any lore of a game played outdoors with sticks and scraps of leather. But by and large the connections that have sustained baseball for more than 150 years are blinking out.

Baseball should rethink its evangelization strategy. The sport's owners have for too long depended on keeping up attendance for its own sake, luring fans into their stadiums by resorting to fancy food courts to make them destinations for other than their stated business. They have appealed to a long-gone respect for institutions and their place in our personal and national history. ("The tradition is here. The memories are waiting," went the old NBC Game of the Week promo.) 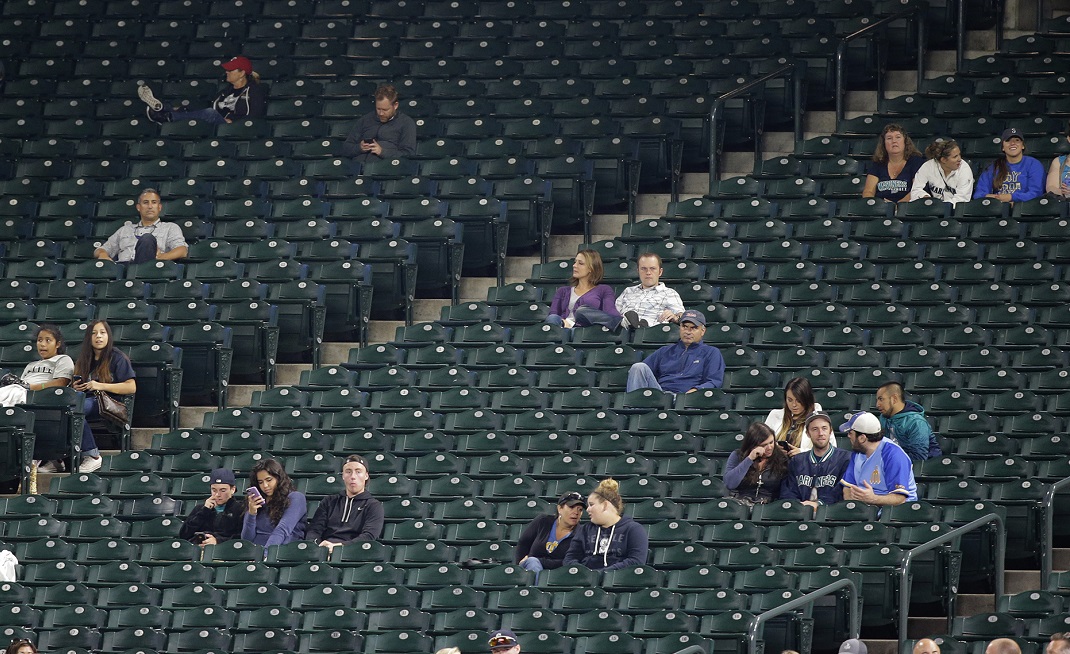 Large sections of empty seats are shown during the sixth inning of a baseball game between the Seattle Mariners and the Texas Rangers at Safeco Field, on Sept. 8, 2015, in Seattle. The announced attendance of 13,389 was the smallest home crowd of the 2015 season for the Mariners. Many MLB teams struggle with low attendance. (Ted S. Warren/AP)

What people want today is not the glorification of an American past but indelible, life-enhancing experience. From the perfect, dissipated March afternoons of spring training in Florida and Arizona to the unparalleled drama of October baseball, the sport stretches across the year. Americans can follow highlights from 15 games most days through a six-month regular season, played from coast to coast. The grueling 162-day schedule full of cherished rivalries, lamentable injuries and the triumphs of superstars and unlikely heroes alike takes place in something like the eternal now.

In every game, you may see something that has never happened before. Every sport has magical moments; baseball is fundamentally enchanted.

While baseball's obsession with statistics has been used to enshrine its past heroes, data has been remaking the game: Incorporating statistical analysis, teams have upended orthodoxies about which pitchers to start when and positioning players in awkward-looking defensive shifts. These probability-fueled decisions frustrate the old-timers but, unlike pitch clocks and designated hitters, they lean into the inner clockwork of the game, not try to tamper with it.

Baseball is complex enough to confound its most learned devotees. When attention drifts or devotion fades, fans don't come back because you've come up with the right formula of distractions but for a single moment of inspiration.

Religion and baseball aren't substitutes for the other, but they run along parallel tracks in American culture. I will gladly root for both to bring flourishing and inspiration to a nation that could use some joy, excellence and virtue just now.

After another long winter, it's mercifully time to say: Play ball!

[Jacob Lupfer, a frequent commentator on religion and politics, is a writer and consultant in Baltimore. The views expressed in this commentary do not necessarily represent those of Religion News Service.]