Can a horror film lead to God? 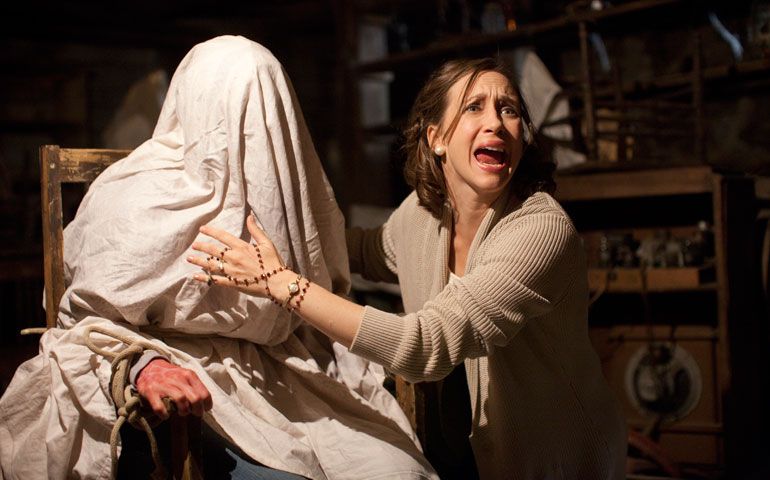 The box office hit "The Conjuring" has all the requisite features of a standard horror flick: creaky doors, mysterious things that go bump in the night, creepy dolls and a dead witch who seizes the body of an unsuspecting mother.

It also has an unexpected background character for a horror film: God.

Screenwriter brothers Chad and Carey Hayes say their film isn't your typical "Christian" movie fare, but it nonetheless carries a strong religious message that can appeal to faith-minded audiences.

It is, they say, a "wholesome horror film."

"The Conjuring" centers on the real-life Ed and Lorraine Warren, a pair of ghost-hunting "consultants of demonic witchcraft." In 1971, they were called to a 19th-century Rhode Island farmhouse where things had gotten downright spooky.

Clocks stopped every night at 3:07 a.m. Unseen forces were tugging at the legs of the Perron family's five daughters as they slept. Their family dog is found dead, and strange things are making scary noises in the dark and mysterious basement.

The Perrons seek out the Warrens' help when the ghosts make life unbearable. Armed with an array of cameras and recording equipment, the Warrens set out to identify and expel the evil spirit.

"Something awful happened here, Ed," the clairvoyant Lorraine Warren (played by Vera Farmiga from "Up in the Air") says to her husband.

The Warrens pinpoint the demon of a witch connected to the Salem witch trials as the culprit, and recommend an exorcism. When a priest is unavailable, Ed Warren steps in to perform the rite himself, and it doesn't sit well with the demon named Bathsheba, who hijacks the body and soul of the mother, Carolyn Perron (Lili Taylor).

"God brought us together for a reason," Lorraine assures her husband before the bloodcurdling exorcism begins. "This is it."

As far as horror films go, the $20 million "The Conjuring" is fairly tame. It's more "The Blair Witch Project" than "A Nightmare on Elm Street." And that's what could help attract religious viewers who perhaps haven't seen an R-rated film since the blood-soaked "The Passion of the Christ."

"We wrote a film that doesn't have any slashers, no gore, nobody gets killed," Carey Hayes said.

"And no sex or foul language," Chad, his twin brother, added.

That's a recipe for box office gold, said Bobby Downes, president of EchoLight Studios, which is committed to making and distributing family friendly Christian fare. In fact, he said, the horror genre is exactly where Christian filmmakers need to be.

"The Gospel is sharing this idea that it can take only a small amount of light to dispel a whole lot of darkness," said Downes, whose studio was not involved in the film. "This is one avenue where we can powerfully communicate the Gospel in a way that's attractive. I don't think we have to be limited by the genre."

The Hayes brothers demurred when asked about the film's faith-based marketing campaign, but its distributor clearly has its eyes set on the Christian market: Warner Bros. Pictures brought in Grace Hill Media (whose earlier credits include work on "The Lord of the Rings" and "Man of Steel") to help push the film to religious audiences.

It seems to have worked. "The Conjuring" took in a surprising $41 million in its opening weekend.

The Hayes brothers describe themselves as "Christians" without wanting to go into further labels or detail, and they're convinced of the reality of demonic forces and spiritual warfare.

"For our struggle is not against flesh and blood, but against the rulers, against the authorities, against the powers of this dark world and against the spiritual forces of evil in the heavenly realms," Chad Hayes said, easily quoting from the New Testament Book of Ephesians.

"If you think about it, our movie fits all that."

Ed and Lorraine Warren, who were devout Catholics, dedicated an entire room in their house to a collection of demon-possessed artifacts. They have reels and reels of film of real-life exorcisms, and there's more than enough material for a sequel, the Hayes brothers said.

The film ends with an on-screen quote from Ed Warren, who died in 2006:

"Diabolical forces are formidable. These forces are eternal, and they exist today. The fairy tale is true. The devil exists. God exists. And for us, as people, our very destiny hinges upon which one we elect to follow."

For their part, the brothers say it's more than a bunch of Hollywood make-believe.

"We're 100 percent aware of the reality that there is darkness and there is light," Carey Hayes said. "We've seen it. We've witnessed it."

"We've seen things," Chad chimed in, "that I wish we never saw."

'Conjuring' up the whole story

Some media watchers are taking film reviewers to task for not reporting that the story of "The Conjuring" and its featured couple, Ed and Lorraine Warren, could be hoaxes.

For example, the Houston Chronicle called "The Conjuring," "based on the case files of the Warrens," "artfully crafted ... with a bold classic vibe" but never mentions that the Warrens' earlier project, "The Amityville Horror," wasn't exactly "based on a true story" as billed. The lawyer of the couple who lived in the Amityville house has confessed that the three of them and writer Jay Anson concocted the story "over many bottles of wine." This didn't stop the Warrens from cashing in on the fame and promoting themselves as celebrity demon chasers.

This year, Jane Mulkerrins, writing for London's The Sunday Telegraph, interviewed horror novelist Ray Garton, who worked with the Warrens on a book about a haunted funeral home in Southington, Conn., in the late 1980s. Garton says when the stories of the home's owners didn't add up, Ed Warren told him to "make up" what he needed. Garton wanted the resulting book, In a Dark Place, sold as fiction, but the publisher demurred.

So while filmmakers Chad and Carey Hayes may think their story is more than Hollywood make-believe, others say it's based on a bunch of hooey.

Culture | Can a horror film lead to God?