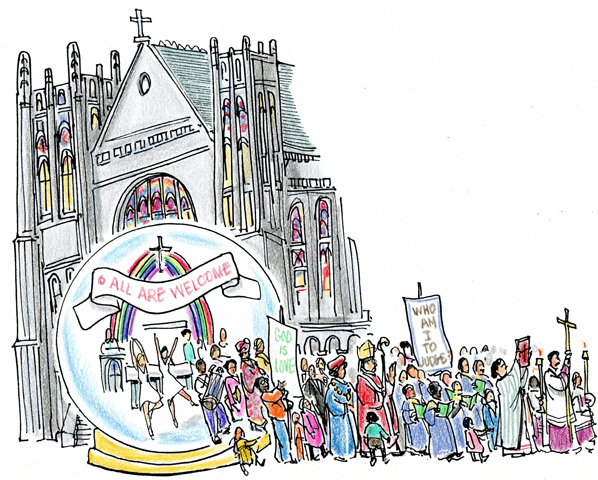 CHICAGO, MARCH 13, 2063 -- Song leader Sophia Santiago stood to the right of the altar of St. Gertrude Church in Chicago and invited those in the crowded pews and in folding chairs to greet their neighbors. "All are welcome," she proclaimed.

To the simple notes of a single piano, the parish choir and the congregation sang a sweet, lilting version of "Come to the Water" as liturgical dancers, altar servers, ministers of the word, parish chancellor Emma Okere and pastor Fr. Antonio Fitzgerald processed up the center aisle. The song filled the soaring interior of the 131-year-old structure. On a banner high behind the altar, in large, easily readable lettering, was a quotation from Pope Francis: "Who am I to judge?"

This was one of thousands of celebrations across the globe marking 50 years of rejuvenation and renewal dating from the election of Pope Francis in 2013, popularly called "refreshment of the faith."

'Prisoners of our past'

Consider St. Gertrude and the rest of the Chicago archdiocese.

In 2013, St. Gertrude had been one of 356 parishes in the archdiocese, each with a church and one or more ancillary buildings, such as a rectory and a school.

Today, though, it is one of only 42 full parishes. Over the past five decades, successive Chicago cardinals, working closely with lay Catholics and using a model developed in Europe, closed nearly 90 percent of the traditional parishes in Cook and Lake Counties in Illinois.

The closures affected 314 churches, dating back to 1860. Some were sold, usually at nominal cost, to other religious denominations. A handful were rescued by preservationists and reopened as architectural museums or cultural centers.

The majority, however, were stripped of their stained-glass windows, gold ornamentation and other finery, then torn down, the victims of impossibly high maintenance costs.

It was a drastic cultural shift for Chicago-area Catholics.

"We have become prisoners of our past," Cardinal Willie Barnes said in the early 2020s. "Our church is not rooted in tuck-pointing buildings and repairing furnaces, but in serving the poor, the needy and those in pain."

Eliminating more than 300 full parishes stirred great controversy, and, at any point, the outcry from Chicago Catholics might have been enough to halt the wave of destruction, except for two factors -- the creation of pastoral centers and the Welcome Initiative of Pope Martin (named for St. Martin de Porres).

Pastoral centers, dating from 2025 in Chicago, have been part of a two-prong approach by clerical and lay leaders in the archdiocese to provide for the spiritual needs of Catholics. The other prong is the full parishes.

"A top goal was to make sure that the full parishes were spread equally throughout Cook and Lake Counties so that everyone would have one nearby," said Olivia Gomez, archdiocesan chancellor and head of the Full Parish Commission from 2029 to 2052. "In some cases, this meant retaining a church building that needed extensive and expensive repairs."

Through these full parishes, the archdiocese retains a strong link to the previous two centuries of American Catholicism in Chicago and its suburbs -- as well as to nearly 2,000 years of Catholic churches with soaring spires and imposing worship spaces.

Each full parish has at least two priests -- a pastor and an associate -- as well as a chancellor who, except in rare cases, is a woman.

Since the 2020s, American bishops have raised the status of the lay chancellor, who has become essentially the chief executive officer of the diocese. Although not required, it has become common practice for this chancellor to be female. The practice has also been adopted for full parishes in many dioceses.

A full parish, such as St. Gertrude, has a daily and weekend Mass schedule. Parishioners come together for baptisms and confirmations, for weddings and funerals.

"When I look around the church during Mass," said longtime St. Gertrude parishioner Cirillo Magadan, "I see us as a parish family, and I see all of those Catholics who came before us and worshiped in beautiful, inspiring churches like this one."

In a strip mall a mile and a half to the south, another celebration was being held in a simple storefront. On the large glass window, hand-painted in red and blue, were the words "Lazarus Pastoral Center."

"For I was hungry and you gave me food."

Deacon Liam Saranof was reading the Gospel of Matthew to 27 men, women and children seated on folding chairs in the long, narrow space, the former home of an Ethiopian restaurant.

This strip mall was also the home to a bedding showroom, a Subway sandwich deli, a $10 store and a bicycle repair shop, all of them open on this early Tuesday evening.

A short time later, Saranof's teenage son Karim opened up a small folding table in the center of the space, then carried over a small, brightly painted plastic box containing consecrated hosts that, a few hours earlier, had been delivered by one of the parishioners from St. Gertrude.

"Some of us here think of ourselves also as members of St. Gertrude," machinist Chloe Pardo explained. "But others are only affiliated with the community here. They like the community work we do; they like how close we become."

Pastoral centers, such as Lazarus, located in storefronts, office suites, apartment building basements and small stand-alone structures, evolved informally 40 years ago, in part, for practical reasons, given the continual decline in the number of priests and the inability to pay for the operation and maintenance of most church buildings.

But the trend was also influenced and strengthened by Pope Oscar (named for St. Oscar Romero) in his encyclical "Shepherd the Flock," which called on Catholics to care for "anyone and everyone, without exception." And it piggybacked on a parallel trend throughout Catholicism of faith-sharing groups, meeting in homes on a regular basis.

Often, a pastoral center is formed by a faith-sharing group whose members are looking for a site to serve as a meeting place and a base for community service.

Like Lazarus, most centers are headed by a male or female deacon, many of whom are married. That's another draw, said Pardo. "Deacon Saranof knows what it's like to change a diaper and worry about a teenager who's out late."

The transition of pastoral centers into an established part of the church structure came fairly quickly as an alternative to the traditional churches that were being closed.

In addition, clerical and lay church leaders saw this new form of parish as an important means of carrying out Pope Martin's Welcome Initiative, which was built around his predecessor's question: "Who am I to judge?"

Over the past half century and particularly since the establishment of the Welcome Initiative, Catholicism in Chicago and throughout the world has emphasized openness and inclusiveness.

"We all are sinners. We all must love each other," Martin said. "The sacraments are not a club. They are food, and we are called to feed those in need."

According to Deacon Elizabeth Salazar, a moral theologian at Boston University, the Welcome Initiative resulted from a radical change in the attitudes of church leaders. "Rather than seeing themselves as judges, they defined themselves as servants," she said. "It was a return to the core teaching of Jesus."

No question, she said, there was opposition from those who felt the move was an abdication of the moral authority of the church. Yet the new openness made it possible for robust debate within the church on issues such as divorce, gay marriage, and war.

Once "All are welcome" became seen as an essential part of Catholicism, services began to attract the poor and others who, for one reason or another, had felt looked down on by churchgoers.

Underneath the Pope Francis banner behind the altar at St. Gertrude was another banner with a quote from his successor: "We are all sinners."

At the altar, the celebratory Mass was coming to an end. Fr. Fitzgerald said, "The Mass is ended. Go in peace."

Then he turned to Chancellor Okere at the microphone to the right of the altar, and, as has become traditional at most Catholic churches throughout the world, she added:

"And let us shepherd the flock together."

[Patrick T. Reardon is the author of Catholic and Starting Out and Love Never Fails.]

A version of this story appeared in the May 22-June 4, 2015 print issue under the headline: A church refreshed.