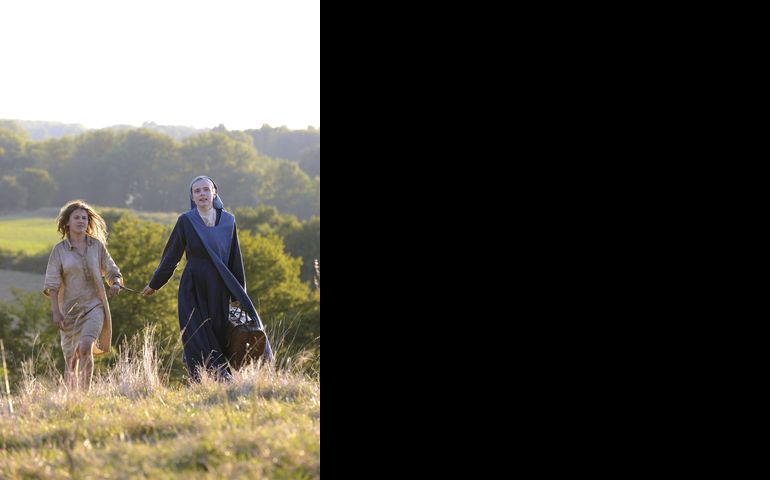 In 1899, when deaf and blind Marie Heurtin is 14 years old, her loving father brings her from the family farm to the Larnay Institute near Poitiers, France, run by the Daughters of Wisdom. The young girl, played by Ariana Rivoire in the film "Marie's Story," extends her face and hands to the warm sun as they ride in the wagon. Marie hugs her father. She is at peace.

The sisters at the institute are either deaf or hearing, and the girls they teach are all deaf. When the mother superior (Brigitte Catillon) and Marie's father (Gilles Triton) go to talk, the girl senses something is different and runs through the garden and climbs a tree.

Young Sr. Marguerite (Isabelle Carré) is sent to bring Marie down and gently extends her hand to Marie and then allows Marie "to see" her by feeling her face. But the moment is lost when the mother superior demands that Marguerite bring Marie down immediately. Monsieur Heurtin departs, taking her daughter with him.

That night, Sr. Marguerite writes in her diary about Marie and believes that teaching the girl may be the reason God called her to be a religious, to free this "imprisoned" soul. She appeals to the rather stereotypical mother superior, who permits Marguerite to go to the farm and bring back Marie.

The parents seem quietly desperate but they obviously love their daughter. The mother (Laure Duthilleul) gives Marguerite a small penknife and explains that this is her daughter's most precious possession, more than dolls.

Marguerite and Marie struggle all the way back to the convent. When they get there, the task seems beyond anyone's ability. Marie terrifies the other girls, and she and Marguerite end up sharing a room so the young nun can watch over her charge.

They come to an uneasy truce. As the days and months go by, Marguerite makes notes in her diary about each setback or victory.

Sr. Raphaelle (Noémie Churlet), who cannot hear, is good friends with Marguerite and becomes exasperated at Marie's antics. She advises Marguerite to teach Marie table manners and how "to be" with others. Indeed, Marguerite struggles to get the girl to bathe and to allow someone to brush her hair. The day Marie allows Marguerite to put on stockings and shoes is a memory to cherish.

In ways that will remind audiences of Annie Sullivan's methods with Helen Keller (born just a few years before Marie) in any version of "The Miracle Worker," Marguerite sets out to find the communication key that will unlock Marie's obviously keen intelligence. Until then, it is through smell and touch that Marie makes her way from a wild child to a young woman.

"Marie's Story" is handsomely rendered, with beautiful, saturated colors and visual texture that invites the audience into Marie's world, learned through touch and smell.

In "The Miracle Worker" the emotional "reveal" in the story is when Helen connects the idea of water with the word water that Annie Sullivan continually spells into her hand. There is a moment of revelation in "Marie's Story" as well, but there is much more to the story that has to do with life, dying, death and what comes next, as Marie learns to cope, to understand, when Sr. Marguerite goes through two episodes of illness.

Director Jean-Pierre Améris, along with cinematographer Virginie Saint-Martin, bring their cinematic empathy to Marie's story by showing us how Marie senses the world. Each shot is framed and often filled with close-ups so we can see and feel what Marie does.

The exquisite scene in the beginning, when Marie, tied into her seat on her father's wagon, reaches up with both hands toward the warm sun, is paralleled at the end when Marie, somewhat older now, goes outside to stand in the fresh falling snow. If you've ever let snowflakes fall on your cheeks, imagine the joy for someone who can neither hear nor see.

"Marie's Story" is based on the true story of Marie Huertin, who continued her education at the institute and lived there until her death at the age of 36. Some online sources say that Marie had a sister named Martha, who was also deaf and blind and joined Marie at the institute.

Rivoire, the young actress who plays Marie with such great realism, is not blind, but she is non-hearing.

History buffs will note that the habits the nuns wear are more 1960s that late 19th century. It's the one criticism that I have of this otherwise lovely film.

The sacramental dimensions of life are illustrated well in "Marie's Story" as it manifests the inner presence of grace in the lives of the characters through the wild beauty of nature and the selfless love of Marie's parents and that of Marguerite and the sisters. The film, which is in French with English subtitles, won the 2014 Variety Piazza Grande Award at the Locarno Film Festival in Switzerland.