Ring around the cross 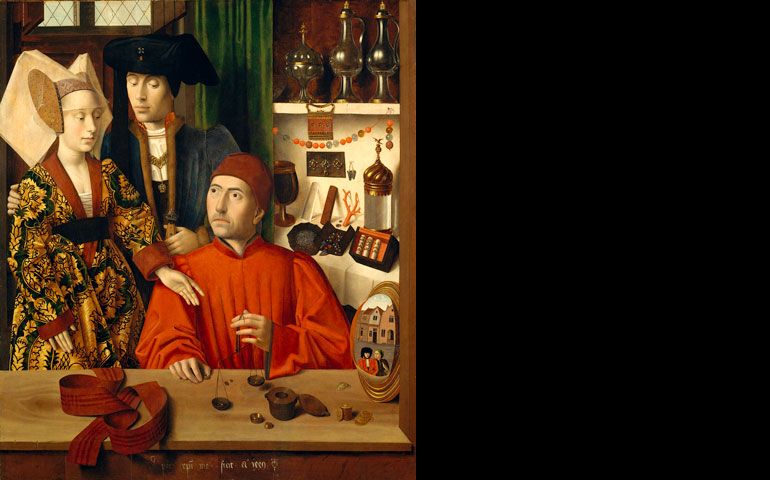 Petrus Christus, "A Goldsmith in His Shop" (1449) (Courtesy of Metropolitan Museum of Art)

On two shelves behind a seated goldsmith dressed in red, in Netherlandish painter Petrus Christus' "A Goldsmith in His Shop" (1449), are the tools of the trade. A box contains several rings stored on rolled pieces of parchment (to accommodate different ring diameters); hat brooches echo the decoration on the wealthy patron's hat; and objects imbued with magical qualities proliferate -- a coconut cup, and fossilized shark teeth (both thought to defend against poison) and coral, which was held to ward off evil spirits (which is why it often appears around the infant Christ's neck in 15th-century Madonna and Child paintings). The shelves also contain rock crystal and a religious vessel, probably a monstrance, which depicts a pelican piercing its breast to provide for its young.

The work, which is in the collection of the Metropolitan Museum of Art, is packed with information, to be sure, and it's been misunderstood until fairly recently.

For a long time, the painting was thought to be an altarpiece depicting St. Eligius, the patron saint of goldsmiths.

"If you look carefully, there's this shadow of a halo around his head. Up until 1993, there was a gold outline of a halo around his head, but it was found to be a later addition, so in 1993 the Met removed it," said C. Griffith Mann, curator in charge of the Met's medieval art department and the Cloisters. "It might be one of the oldest vocational portraits -- a portrait of a specific goldsmith that was commissioned probably to hang in the guild hall. It's one of the early moments of the real perfection of oil painting."

Specific identities of the patron-couple depicted in the work, which appears in the Cloisters' exhibit "Treasures and Talismans: Rings from the Griffin Collection" (through Oct. 18), have also been suggested, particularly a woman from the family of the Dukes of Burgundy.

She married the Scottish king, and "three goldsmiths, on that occasion, were commissioned to produce dowry gifts, and it's thought this might be one of those three goldsmiths," Mann said, noting that the woman in the painting is depicted wearing clothing that was typical of someone betrothed.

The juxtaposition of the rings in the painting with more than 50 rings from the Griffin Collection (one of which it donated to the Met) is a special treat, offering viewers a rare opportunity to compare and contrast actual rings and vessels from centuries past with depictions of those objects in works of art of the time. The rings also prove a telling lens for tracking the proliferation of Christian jewelry.

It's easy to approach the very concept of gem-studded rings with crosses in the early centuries of the church with a great deal of skepticism. If a camel has a better chance of wiggling through the eye of a needle than a rich man does of securing admission to heaven, what business do wealthy Catholics in, say, the fifth century have of wearing expensive jewelry with religious symbolism and iconography?

And isn't it even more hypocritical and greedy of religious leaders to adorn themselves with costly jewelry and to think that slapping a gem-formed cross on the ring somehow makes it all kosher?

According to Mann, the exhibit presents an interesting chronology, even if it's hard to know a whole lot of detail about what early Christians thought on the matter. One of the claims of the show is that Catholic jewelry found its way onto clerical fingers, wrists and necks only after they debuted in the fashion and attire of upper-class religious families.

An early Christian gold and gemstone ring, for example, which dates to fourth- or fifth-century Rome, forms a cross out of a central emerald and four strategically placed garnets. According to Mann, the rings began to emerge in prominent Roman families as they started identifying as Christians in Roman Egypt, where Egyptian burial practices blended with Christian traditions.

A second- or third-century Egyptian mummy shroud in the show depicts several rings on a hand, including a key ring on the left pinky hand. Roman key rings would have been held by the matron of the house, and a small key on the ring would unlock a cabinet used to store expensive spices.

"When someone was buried, they were buried with their finest worldly possessions," Mann said.

Those key rings would become ornamentation in subsequent centuries, and the appendages off of the ring bezel (or hoop) ceased to be functional. That, often, was where the cross came in.

A fourth-century golden Roman key ring features a cross where the key ought to be, but Mann notes that both the key ring cross and the emerald-and-garnet cross ring are understated by design.

"These two rings that one can see in them Christian symbolism -- the sign of the cross -- are not necessarily as overtly Christian as one might imagine," he said. "This is probably a moment when Christianity is still a religion that is practiced not always out in the open. To have something like a cross that could be read as ornament, or by those that are practicing Christians as a symbol of Christianity and as a symbol of their own faith, is something that you begin to see in rings."

Gold, he adds, wouldn't necessarily imply that the owner was very wealthy. The amount of gold required to make some of the rings was actually quite small, although the rings that contain true gemstones would have carried higher price tags. (Included in the exhibit are some knockoffs, or hybrids, in which some of what appears to be gemstone is actually colored glass.)

Garnets were readily available in Western Europe at the time, although emeralds may have come from as far away as India.

"Although these rings are made in the Mediterranean world, the materials that they are using are often coming from very faraway places," Mann said.

Another major shift represented in the exhibit is the Christian rethinking of burial traditions. Many Egyptian rings have survived, Mann says, because they were buried with the dead.

"In the Egyptian tradition, the body needed to be preserved because the body was the home of the spirit," he said. "In many cases, these rings have been found in the context of excavation."

But Christians, who did not believe they needed to bring their treasured belongings with them to the afterlife, instead endowed their wealth to churches or to family.

Rings were often gifted on important days, such as New Year's, and Sts. Barbara, Catherine and Christopher were the most popular to be associated with rings, according to Mann, although often an inscription devoted to a specific patron saint would appear on a ring.

"The idea here is that this ring is as close as that saint can get to your body, so you're always wearing their presence and their protective capacities," he said. (Although rings tended to be too small to feature relics, other jewelry, such as pendants, often contained saintly remains.)

The precious stones themselves also carried deep significance and were thought (like the shark teeth and coconut) to have special powers.

"You will typically find the most prevalent stone in a bishop's ring will be a sapphire, because that's associated with purity," Mann said. "The color blue is associated with the heavens, with the Virgin Mary. It's also a stone that's connected to truth-telling."

Rock crystal was thought at the time to be petrified ice, which lent it special significance.

"As a substance that hovers between these two stages -- liquid and solid -- it's often kind of pregnant with meaning of the movement between matter and spirit," which is why rock crystal was often featured on Gospel books, Mann said.

Perhaps the most fascinating ring in the show is a so-called Gimmel ring, dated to 1631 Germany and named not for the third letter of the Hebrew alphabet, but for the Latin word for twin.

Two bands of the memento mori ring, which symbolizes the passage of time and the inevitability of death, open up (almost in handcuff formation) to reveal two hidden compartments: one depicting a curled up infant and the other a skeleton.

An inscription on the band quotes from Matthew 19:6: "What therefore God hath joined together, let not man put asunder."

The ring, then, was a wedding ring, and "the duality of life and death and the proximity of those things to each other are an incitement to devotion," Mann said.

The ring is paired in the exhibit with a stunning Flemish rosary bead (circa 1525-50) that opens to reveal two scenes: one of the Final Judgment with the blessed and the damned, and the other a scene of Death arriving unannounced at a banquet. Again, Matthew (this time 24:42) is cited: "Watch therefore: for ye know not what hour your Lord doth come."

Mann calls the juxtaposition "the perfect pair," and as problematic as it might be to use the word "perfect" to describe Christian rings, he is surely not very far off.

[Menachem Wecker is a Washington, D.C.-based reporter and co-author of the new book Consider No Evil: Two Faith Traditions and the Problem of Academic Freedom in Religious Higher Education.]

Culture | Ring around the cross