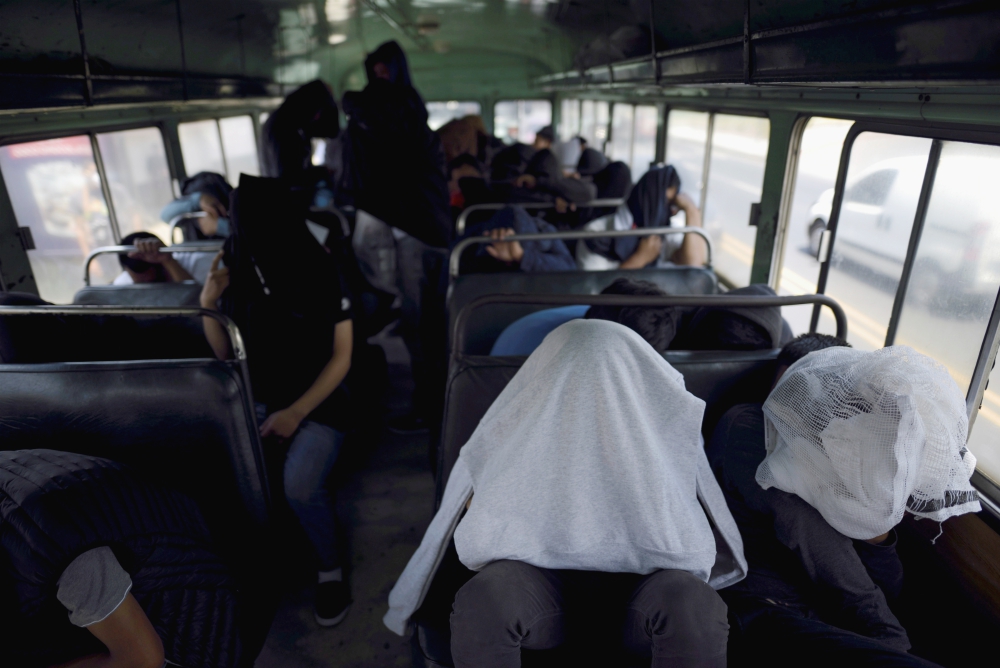 Guatemalan migrants cover themselves while on a bus outside La Aurora International Airport in Guatemala City March 19 after being deported from the U.S. (CNS/Reuters/Fabricio Alonso)

Despite the COVID-19 pandemic, U.S. Immigration and Customs Enforcement continues to transport detained immigrants on airplanes to Latin American countries and rural U.S. towns ill-equipped to handle outbreaks of the virus. That's the conclusion of an Aug. 4 report from Witness at the Border, an immigrant advocacy group.

Using data from a flight tracking app, Witness at the Border identified 1,428 likely ICE flights between April and July 2020 during the COVID-19 pandemic — 2,808 total for the year through July.

This figure includes flights transporting detained immigrants between detention facilities in the U.S. and flights deporting them to locations in Latin America and the Caribbean. Between April and July, the group has noted 258 deportation flights to Latin American countries.

People deported by ICE have tested positive for COVID-19 upon arrival in countries across the globe, including Haiti, Guatemala and India, according to The Intercept.

"While COVID is raging inside of our borders, we have a complete disregard for sending COVID outside our borders, to other places," Karla Barber, a member of Witness at the Border, told NCR. "We know that COVID-positive people have been put on planes to places ... that don't have a medical system equipped to handle a big outbreak of this disease."

In July alone, Witness at the Border identified 29 ICE flights to Mexico, 18 to Honduras, 13 to Guatemala, and nine to El Salvador, along with other countries. The number of flights deporting immigrants to Latin America and the Caribbean dipped in late spring, but July's number was just 10% lower than it was in March, when lockdowns first took effect in the U.S. 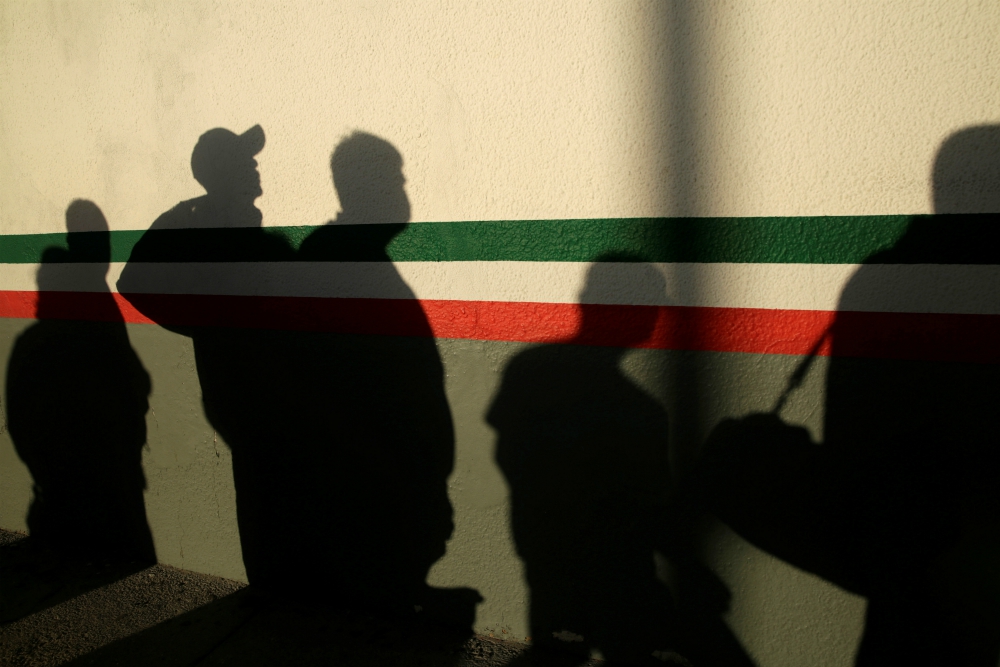 Immigrants in Ciudad Juárez, Mexico, cast shadows on a National Institute of Migration building after they were deported from the United States April 21 during the coronavirus pandemic. (CNS/Reuters/Jose Luis Gonzalez)

As of Aug. 31, the agency had not responded to a detailed list of questions NCR submitted by email. In a statement on its website, the agency said it is following Centers for Disease Control and Prevention guidelines.

ICE does not publicly release data on its flight operations, so Witness at the Border members used an app called FlightAware, which allows them to track the origins and destinations of flights, as well as the airlines and the tail numbers of specific planes, Barber said.

The group identified about 200 detention sites across the U.S. that were likely origin points for ICE flights, said Tom Cartwright, the lead researcher for the report. ICE contracts with several airlines, including Swift Air and World Atlantic Airlines, Cartwright said.

The data is not exact, and it only accounts for flights within the U.S. and to countries in Latin America and the Caribbean — missing flights to Asia, Europe and Africa, Cartwright said. The report also doesn't tally the number of people on each flight. FlightAware does not offer this data, nor does ICE, he said.

Still, Witness at the Border members said their data shows how U.S. immigration policy has helped spread COVID-19 to other, more vulnerable countries.

In May, the Miami Herald reported that ICE knowingly deported immigrants who had previously tested positive for COVID-19 to Haiti, a country with about 120 ICU beds for a population of 11 million, according to The Intercept.

And through April, over 50% of immigrants ICE deported to Guatemala tested positive for COVID-19 upon arrival, according to the Texas Observer. The Guatemalan government has suspended deportation flights from the U.S. multiple times in an effort to pressure the U.S. government to improve hygiene and testing, the Observer reported. 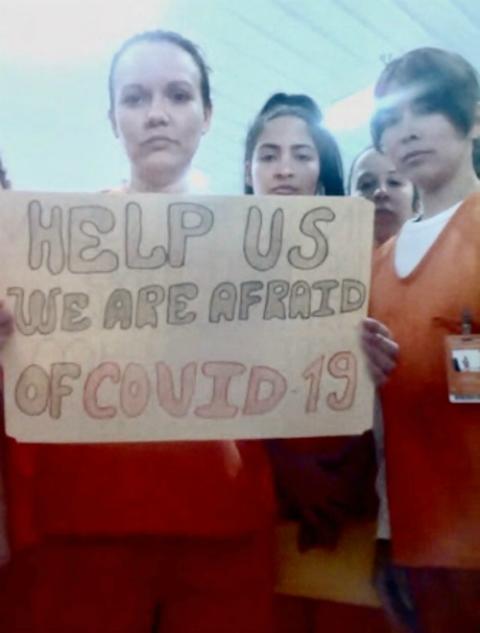 Migrants detained in an Immigration and Customs Enforcement facility in Basile, Louisiana, display signs April 3 related to the coronavirus disease. (CNS/Handout via Reuters)

Witness at the Border is concerned about the spread of COVID-19 within detention facilities and their surrounding communities, often located in rural parts of the U.S. with few hospital beds, Cartwright said.

As of Aug. 27, ICE had confirmed 5,300 total cases of the virus among detained immigrants, with five deaths. It had also confirmed 45 cases among employees at detention centers. One detention facility in Farmville, Virginia, has seen 339 total cases and one death, leading to an outcry from Gov. Ralph Northam and immigration advocates, according to The Washington Post.

Between April and July, Witness at the Border identified 726 domestic flights not connected to an international deportation flight, but were most likely bringing detained immigrants from one U.S. facility to another, according to the report.

"Detention centers are basically petri dishes for COVID. There is no ability to social distance, the hygiene is very difficult to maintain in those places," Cartwright said. "It's a risk not just for the detainees, but it's a risk for the employees, staff and the communities they reside in."

Witness at the Border got its start in 2018 as Witness: Tornillo, when founder Joshua Rubin traveled to the Office of Refugee Resettlement's* detention center in Tornillo, Texas, to protest the incarceration of migrant children there. He and other activists have also held monthslong vigils to protest immigrant detention in Homestead, Florida, and Brownsville, Texas, Rubin said.

In Brownsville, the activists started observing ICE deportation flights out of the local airport, Rubin and Barber said. Rubin said he saw families being loaded into planes in shackles, and migrants being asked to open their mouths as guards searched them for contraband. The sight of children being led up the gangways brought him to tears.

"We're talking about people who've had to leave their own country, which is a hard enough thing to do as it is, and they've come through so much," Rubin said. "And then they're loaded onto these planes. ... My God, the first couple of times you see something like that it stops your heart."

Barber said most flights happen in the very early morning, before the sun comes up, under cover of darkness. When officials at the airport noticed Witness at the Border observing the flights, they moved oil tankers to block the activists' view of the planes, she said.

"It was very telling, in that they didn't want us to see," Barber said. "Which told me, we needed to try even harder to see."

*This article has been edited to correct the government entity that runs the Tornillo facility.