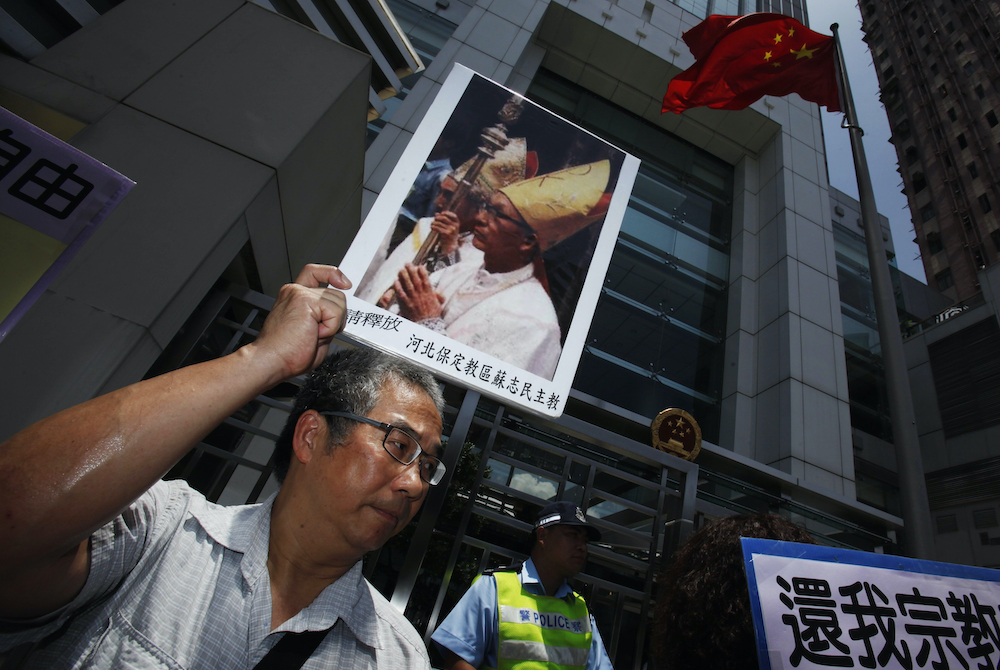 A protester carries a portrait of imprisoned Chinese Bishop James Su Zhemin of Baoding outside the China Liaison Office in Hong Kong during a 2012 religious freedom demonstration. Bishop Su has been held in detention in China since 1997, and there is speculation he may be dead. (CNS/Reuters/Bobby Yip)

The disappearance — and rumors of the possible death — of a Chinese Catholic bishop was the subject of a July 30 hearing by Congress' Tom Lantos Human Rights Commission.

The prelate in question, Bishop James Su Zhimin of Baoding, was arrested in 1997.

"We are saddened by the recent reports that Bishop Su may have died during his recent imprisonment," said Nury Turkel, a Uighur American who is a member of the U.S. Commission on International Religious Freedom, in testimony during the hearing. Bishop Su, if he is alive, would be 88 years old.

"Today, I again join many, including the bishop's relatives and ask [Chinese] President Xi Jinping: Where is Bishop Su?" said Rep. Christopher Smith (R-New Jersey), co-chair of the Lantos commission, who led the hearing.

"What have you done in secret to this extraordinary man of God?" Smith asked. "And why does a powerful dictatorship fear peaceful men and women of faith and virtue?"

Smith said he met Su once, in 1994, after the bishop had already spent many years in prison, "yet he had extraordinary gentleness, strength, courage and a peace that surpassed all understanding. Bishop Su told my delegation after celebrating Mass in a tiny apartment that he prayed for his persecutors, and he especially prayed for the cruel and misguided leadership of the Chinese Communist Party."

He added: "Bishop Su was beaten, starved and tortured for his faith. Yet he prayed not just for persecuted believers but for God's mercy on those who hate, torture and kill. His faith in Jesus absolutely amazed me. Cynically, Chinese authorities arrested him before my delegation even left the country and held him for nine days. He was arrested again in 1997 and has not been seen since, save for once in 2003 when he surfaced in a hospital in Baoding."

After stretches in prison totaling about 40 years, Smith said, "the Chinese Communist Party refuses to disclose where he is and what they have done to him. What are they hiding?"

Su is "a great hero to the cause of religious freedom," said Nina Shea, director of the Center for Religious Freedom at the Hudson Institute. "He's simply a victim of persecution. He made a deliberate choice to resist" terms that would have won him his release because he would "not to give to Caesar what belongs to God."

Shea pegged Bishop Su's estimated 40 years of confinement "by the Chinese government in secret detention without due process" as longer than Nelson Mandela's imprisonment on Robben Island in South Africa, which lasted 27 years.

"That is one of the longest-serving — assuming he's still alive — political prisoners in the world," she said.

Tom Farr, president of the Religious Freedom Institute and former director of Religious Freedom Project at Georgetown University's Berkley Center in Washington, called Su's jailing "one of the most serious violations of human rights and human dignity in the 21st century."

Farr said the Vatican should reject "the choosing of his replacement" as it would be under the terms of a 2018 provisional agreement between the Holy See and China. Scheduled to expire in September, the agreement's terms have never been revealed, but Farr said it would give the Chinese government the right to appoint bishops.

The Vatican, he added, should not extend the agreement. The original deal "was a mistake," Farr said. "The Holy See cannot achieve its goal of uniting Catholics in China whose priests and bishops are loyal to the Catholic Church and the Chinese Communist Party while remaining faithful to the teachings of the Catholic Church."