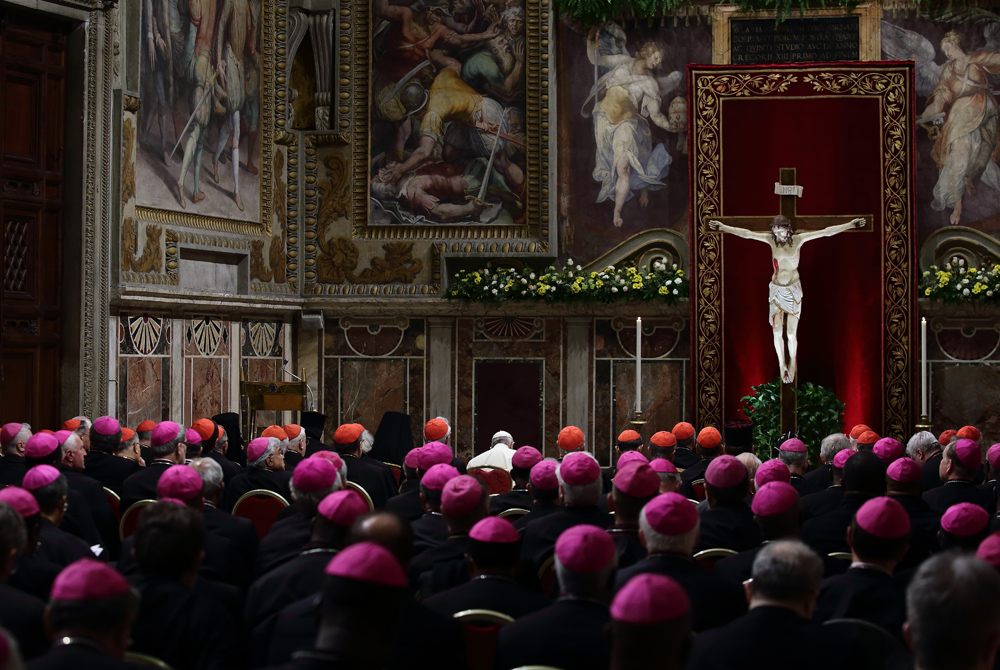 Pope Francis and prelates from around the world attend a penitential liturgy during a meeting on the protection of minors in the church at the Vatican in this Feb. 23 file photo. (CNS pool/Evandro Inetti)

Pope Francis' decisions to remove the pontifical secret in clergy sex abuse cases, as well as raising the age for what constitutes child pornography, enact long-sought reforms. The decisions also did something else: They further disproved the dire and depressing verdicts rendered by many pundits on last February's Vatican summit to address the issue.

A few weeks after that summit brought together the presidents of all the world's episcopal conferences to address the scandal, all manner of voices, left and right, denounced the event as a failure or, worse, a sham.

The Vatican summit produced no decisive, action-oriented results, just more platitudes and promises. I consider this a positive because it should remove any doubt about whether the Vatican and the hierarchy have the ability or the will to take the radical steps essential to fixing the problem.

Doyle went on to say the only really good thing to come from the summit was the gathering of victims from around the world who held protests outside the summit meeting.

At the National Catholic Register, Archbishop Carlo Maria Viganò, a leading critic of Pope Francis, complained that the February summit was not even focusing on the right problem. They should have included a focus on sexual misconduct with adults as well as children, he argued, and he was appalled that the bishops were not focusing on homosexuality:

Why does the word "homosexuality" never appear in recent official documents of the Holy See? This is by no means to suggest that most of those with a homosexual inclination are abusers, but the fact remains that the overwhelming majority of abuse has been inflicted on post-pubescent boys by homosexual clerics. It is mere hypocrisy to condemn the abuse and claim to sympathize with the victims without facing up to this fact honestly. A spiritual revitalization of the clergy is necessary, but it will be ultimately ineffectual if it does not address this problem.

He went on to ask "Why does Pope Francis keep and even call as his close collaborators people who are notorious homosexuals?"

Before the meeting even began, my colleague Jesuit Fr. Thomas Reese predicted that the summit would fail and offered five reasons to support his prediction. The meeting had not been well prepared, it was only for four days and nothing can be accomplished in such a short time, etc. He predicted Francis would not lay down the law as was necessary.

My colleague Jamie L. Manson, who attended the summit and filed a report here at NCR, insisted that "the outcome was disappointing and demoralizing." Frustrated that the press was not invited into the deliberations of the summit, Manson relied on the press briefing to reach her conclusions. Those conclusions were exclusively negative:

The cardinals, archbishops and other high-ranking clergymen who appeared at the summit's daily press briefings looked at turns exhausted by the weight and bleakness of the situation, embarrassed by their obvious incompetence, confounded by some of their peers' refusal to see why sex abuse is a problem, and generally adrift in the cesspool they have created.

Manson warned that the promises of action "would all be accomplished on Italian time."

They were all wrong. As my colleague Joshua J. McElwee noted in his article about the pope's decisions this week, in March, the Holy Father placed reporting requirements on all personnel in the Vatican City State. At the same time, the pope also required the diplomats of the Holy See to report clergy sex abuse as well. Any pedophile who thought they could hide behind diplomatic immunity or the walls of the Vatican was disabused of that possibility.

Then, in May, Francis promulgated Vos estis lux mundi ("You are the light of the world"), which established a universal reporting mechanism, known as the metropolitan plan, designated all priests and members of religious orders as mandatory reporters, required compliance with civil legislation and, most importantly, established sanctions for covering up sex abuse that were equivalent to the abuse itself. This last was the long-missing building block in creating a culture of accountability among the world's bishops.

These steps are significant. These steps are the kinds of things you do when you want to change the culture of secrecy and cover-up that reigned for so long and replace it with a culture of accountability. These steps aim to deliver justice to the victims of clergy sex abuse. These steps have all flowed from that much-maligned February summit.

The skeptics failed to understand what was happening in the culture of the church and especially at the Vatican: That Pope Benedict XVI had strengthened the church's response to sex abuse over what he inherited and now Francis was strengthening it over what he inherited. They failed to understand that the cumulative efforts of Boston Cardinal Sean O'Malley, which appeared frustratingly slow, were in fact putting down deep roots. They failed to consider that in appointing Indian Cardinal Oswald Gracias*, Chicago Cardinal Blase Cupich, Malta Archbishop Charles Scicluna and Jesuit Fr. Hans Zollner to organize the summit, the pope was appointing men who were not only knowledgeable about this subject, but known for effective leadership.

The skeptics are yet to be convinced of what so many of Francis' other detractors can't believe, the words of Isaiah: "Behold I am doing something new. Do you not perceive it?"

*This story has been updated to add Indian Cardinal Oswald Gracias' name to the list of organizers of the Vatican abuse summit.