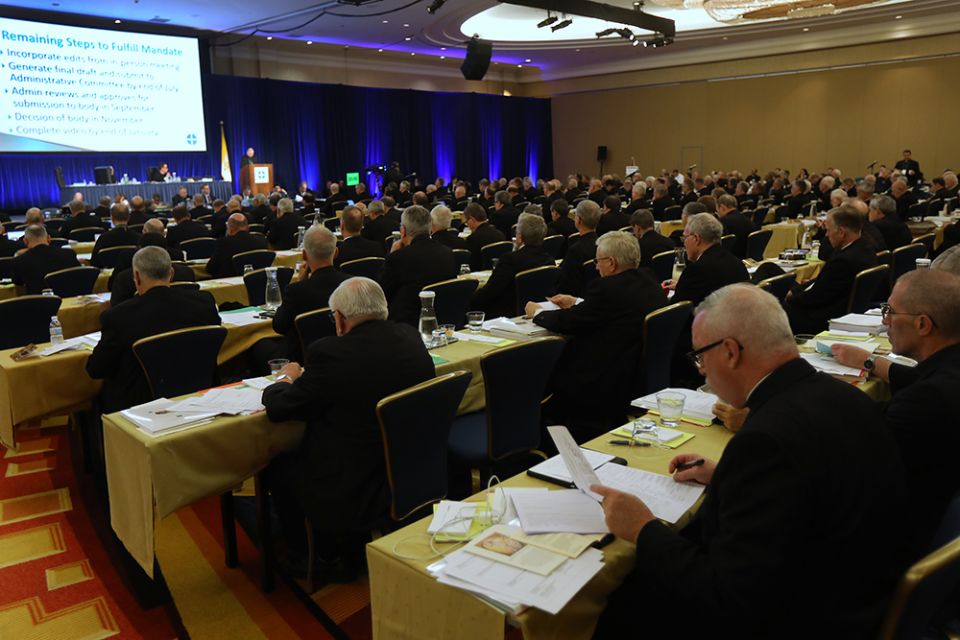 Archbishop Jose Gomez of Los Angeles, vice president of the U.S. Conference of Catholic Bishops, speaks on the first day of the spring general assembly of the USCCB June 11, 2019, in Baltimore. (CNS/Bob Roller)

My colleague Joshua McElwee has an article today listing the U.S. dioceses that are vacant, those with a bishop who is already past the mandatory retirement age of 75, and those soon to turn 75, 22 ordinaries in all. As he notes, these appointments could potentially shift the U.S. bishops' conference in a new direction. Let's look at which appointments are the most important and why, and discuss generally the kinds of choices the pope faces.

First, a little background. For most of the history of the Catholic Church, bishops were nominated by the local civil authority, and it was left to Rome to confirm the nomination. Occasionally, a pope would refuse a candidate, or occasionally a government would refuse to nominate anyone, leaving a see vacant, in a tug of war between church and state. Only in the Papal States did the pope possess the right, without question, to nominate bishops. Until the birth of the United States.

The First Amendment's separation of church and state was a novelty to Rome. A couple of years previously, before the adoption of the Bill of Rights, the papacy had approached the U.S. government about appointing a bishop to the new country and the government said it had no interest in the matter. The U.S. clergy, however, were concerned about the still latent anti-Catholicism of the new republic, and they petitioned Rome to be allowed to vote amongst themselves on the nomination. They choose John Carroll, whom Rome duly named the first Bishop of Baltimore.

Throughout the 19th century, when a vacancy opened, the clergy of the diocese would compose a terna, a list of three candidates, then the bishops of the province would gather and compose their own terna. If the vacancy was that of a metropolitan, a third step was added and the other archbishops of the country would also compose a terna. This went to Rome, where the Congregation for the Propaganda would discuss the ternas, and make the final recommendation to the pope. In 1893, the Vatican established an apostolic delegation (an ambassador to the church with no formal relations with the government) and the delegate began consulting as he saw fit and composing the sole terna that went to Rome. Early in the 20th century, the U.S. was taken from the jurisdiction of the Propaganda and the final ternas were done by the Consistorial Congregation, the forerunner of today's Congregation for Bishops.

As you can see, since 1893, the role of the apostolic delegate – since 1984, the nuncio – has been hugely important, even dominant. In the long tenure of Archbishop Amleto Cicognani as delegate from 1933 until 1958, he frequently turned to the priests of his friend Bishop Edward Hoban of Cleveland, which became a bishop factory: John Dearden, cardinal archbishop of Detroit, John Krol, cardinal archbishop of Philadelphia, Floyd Begin, the first bishop of Oakland, California, John Treacy, bishop of La Crosse, Wisconsin, Paul Hallinan, the first archbishop of Atlanta, and John Whealon, Archbishop of Hartford, Connecticut, all began their careers as assistants to Hoban. This offset the enormous influence of Cardinal Francis Spellman, who was a close friend of Pope Pius XII and compiled a similar list of influential posts for his assistants.

Spellman's appointment to New York almost did not happen. The terna to fill New York was on the desk of Pope Pius XI when he died, with Archbishop John McNicholas of Cincinnati in first place. The new pope instead selected his friend Spellman. But, in most appointments, especially to smaller sees, the pope is not going to know the candidates personally, and so he must rely on his nuncio and the advice of those bishops whom he knows and trusts. There are more than 2,800 ordinaries worldwide today and so Francis, despite having a wide and well-tuned network for collecting information, must rely on the advice of those whom he has come to trust.

Looking at the list of openings now, the most important is one of the dioceses with the fewest number of Catholics: Birmingham, Alabama, home of EWTN. As my colleague Heidi Schlumpf detailed last week, EWTN's relationship with ecclesiastical officaldom is complicated. It puts itself forward as the "authentic" Catholic perspective, despite its obvious and repeated opposition to Francis. It is technically independent of any episcopal control. No bishop should think censorship is a good idea, but the new bishop in Birmingham will need to speak out and clarify when necessary that the network does not speak for the church.

Bishop Robert Baker has done nothing to address the fact that EWTN is not an official arm of the church. Pope Francis is aware of how important this appointment is and has already been soliciting ideas from his most trusted U.S. allies. They cannot send in a pure liberal: That would simply cause an explosion. Someone of moderately conservative temperament and a strong commitment to Francis must be found.

Of the vacant archbishoprics, Atlanta represents the future of the church, St. Louis perhaps its past. Demographically, they can't build churches fast enough in Georgia while in St. Louis, the question is how long they can keep some of the churches open. In the middle of the 20th century, three of St. Louis' ordinaries were made cardinals: John Glennon, Joseph Ritter and John Carberry, but since the latter's retirement in 1979, no red hat has gone to an incumbent archbishop there. Atlanta may yet see a red hat, but Pope Francis does not view the conferral of the red hat as tied to any particular see. Red hat or no, the next archbishop there will oversee continued expansion as the city grows and grows.

Philadelphia is a difficult case. No diocese has been more identified with the curse of clericalism than Philadelphia. Had Archbishop Charles Chaput focused on breaking down the clerical culture, he might have been a very successful archbishop, but instead he decided to use his platform to became a major general in the culture wars, including a not-too hidden distaste for Pope Francis. The day the news broke about the "testimony" from former nuncio Archbishop Carlo Maria Vigano, Chaput sent out a spokesman to tell the Catholic News Agency, an organization with which Chaput was heavily involved for its inception, that he "enjoyed working with Archbishop Vigano during his tenure as Apostolic Nuncio to the United States and found his service to be marked by integrity to the Church." He could not muster a word for the integrity of the Holy Father. Safe to assume Chaput's replacement, who could be in place by the end of the year, will be a little more complimentary about the pope.

In addition to selecting a pastoral prelate for the City of Brotherly Love, it will be interesting to see if the pope goes for a legacy appointment, or for a healing choice, or perhaps a bit of both. One prelate told me he expected they would send someone tasked with "blowing up the clerical mafia." I suspect, however, that as we saw in the selection of Archbishop Wilton Gregory for Washington, Pope Francis will want someone who, while not in the opposition, is not a fire-breather either. Pope Francis is acutely aware that his ministry is a ministry of unity, and that the U.S. bishops' conference is badly divided. I wish he was a bit more willing to throw for the end zone, appointing younger men who are not afraid to tackle the opposition, but he has given the nuncio clear instructions to find pastors first and foremost, and even conservative Philadelphians need a pastor.

San Bernardino and Brooklyn will prove to be critical appointments. San Bernardino was only erected as a diocese in 1978, carved out of the Diocese of San Diego. If they were rejoined, they would be the second largest diocese in the country after Los Angeles. That is the kind of explosive growth the church is seeing in southern California. Bishop Gerald Barnes will be a tough act to follow, a bishop in the mold of Pope Francis long before Francis was elected pope. Brooklyn, unlike many Northeastern dioceses, remains vibrant because of its large immigrant population. The diocese is not only large, it shares a seminary with its two neighbors, New York and Rockville Centre, neither of which are led by bishops in the mold of Francis. It is vital that the pope names someone who will be a force for balancing the more conservative leanings of his neighbors.

All of the appointments will matter. Sometimes a small diocese like Rapid City becomes the place from which great careers are launched: Both Chaput and Chicago Cardinal Blase Cupich began their episcopal ministry in the tiny South Dakota diocese. Colorado Springs, like Brooklyn, needs someone to balance the more conservative Metropolitan in Denver. Helena needs someone who will continue the pastoral leadership of Bishop George Thomas, translated to Las Vegas last year. Beaumont, Texas, needs a counter-point to archconservative neighbor Bishop Joseph Strickland in Tyler.

In McElwee's article, Professor Massimo Faggioli made an important point, saying, "For Francis, bishops are much less 'representatives of Rome' and more pastors of their local church. In this sense it is not true that Francis is making bishops that reflect his priorities in the same way John Paul and Benedict made bishops according to the priorities of their pontificates." This is undoubtedly true. But, the pope must also know that the U.S. bench needs a jolt, that our country is uniquely receptive to attacks on this pontificate.  Yes, Francis should find pastors, but he should not be afraid to ruffle a few feathers either. Communion with the Bishop of Rome is the mark of unity the U.S church needs to highlight and its new bishops should reflect that commitment.