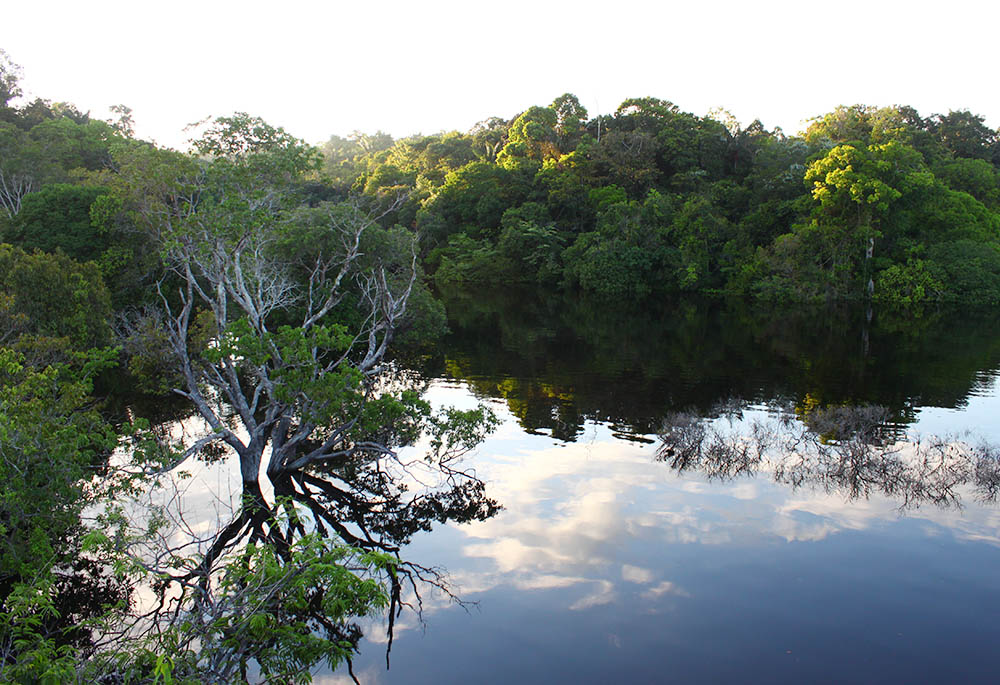 A recently published study shows that the Amazon, the world's most vast rainforest with an area of more than 2 million square miles in South America, has been losing its capacity to recover from ecological harm over the past two decades, something that may result in irreparable damage.

The study's authors, however, explain that there is still time to intervene — and church and popular movements in the region hope that devastation can be stopped before the region becomes a giant system of savannahs.

Published on Nature Climate Change, the study demonstrates that three-quarters of the Amazon has been consistently losing resilience since the early 2000s, displaying an inferior ability to regain vitality after dry seasons. Losses were higher in territories closer to human activities.

The group of scientists who conducted the study, all of them connected to the University of Exeter's Global Systems Institute, analyzed data generated by satellites, examining elements like the vegetation's greenness and density.

They could empirically confirm that the increasing risks of dieback in the rainforest are linked to overall drier conditions — which have produced three recent serious droughts in the Amazon — and to deforestation caused by human activity.

Chris Boulton, the study's lead author, told EarthBeat that there is a series of different feedback processes impacting the scenario and contributing to the resilience decline in the Amazon.

"The rainforest recycles water through evapotranspiration around six or seven times from the coast to the deeper parts of the forest. A reduction in trees on the edge of the forest breaks this cycle down as water is evaporated from leaves in this process," he explained. 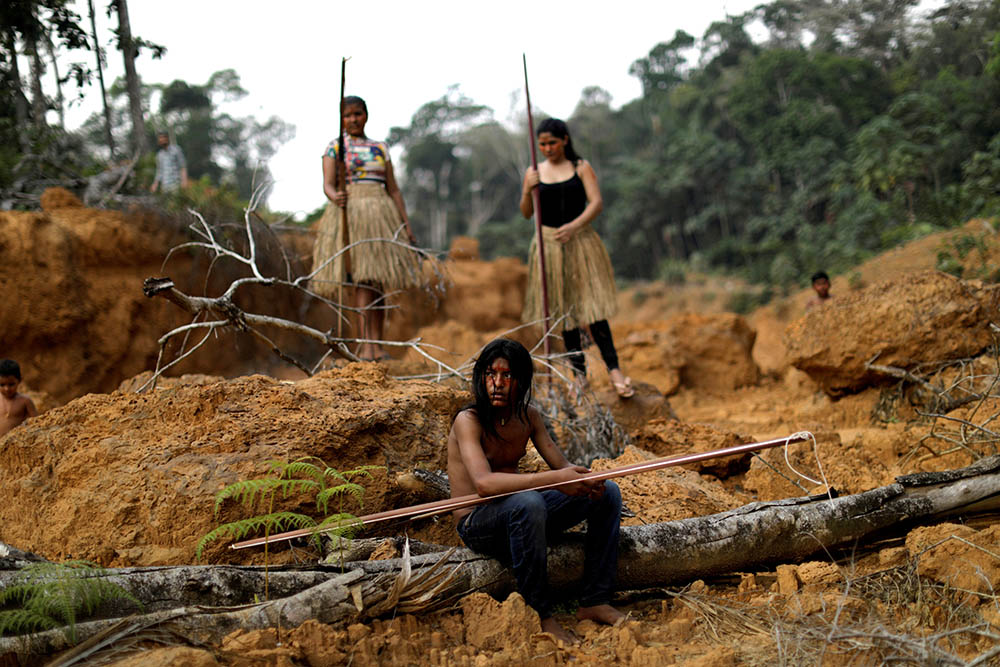 Young people from the Mura tribe are seen at a deforested area in unmarked Indigenous lands inside the Amazon rainforest near Humaita, Brazil. (CNS/Reuters/Ueslei Marcelino)

"Trees are getting less rain and so those that were already getting less water are going to be under more stress," he concluded.

Wildfires are another relevant factor that can "dry areas out and leave them prone to more fires," further increasing dry conditions and reducing evapotranspiration, he said.

"Climate change and human factors can lead to less rainfall in the area for these reasons and we are seeing the trees losing resilience because of this," Boulton affirmed.

Boulton and his colleagues do not believe the Amazon's deforestation has reached a point of no return. Impeding its further devastation can still have a positive impact, he affirmed.

"Changes in policy would certainly go a long way to helping the forest. More environmentally friendly actions can begin to restore the resilience of the forest, and in turn it might even help with global climate change by taking in more atmospheric carbon dioxide," Boulton explained, defining the study as an "early warning signal of the approach towards a tipping point."

"We are not there yet. This warning can give us a chance to do something about it," he added.

'It is not a coincidence that invaders have been attacking exactly the lands where such guardians of the rainforest live.'

Indeed, church members who have been active in the region for decades believe that new kinds of community organization can work well to impede illegal logging, mining and ranching in the Amazon, maybe avoiding the worst-case scenario in the future.

U.S.-born St. Joseph Sr. Jean Ann Bellini, a longtime member of the Bishops' Conference's Land Pastoral Commission, emphasized that the destruction of the Amazon is directly related to the historical lack of land reform in Brazil.

Most of the rainforest's territory consists of public lands where traditional populations like Indigenous groups and quilombolas — descendants of African slaves who fled captivity during the slavery era in Brazil (1500-1888) — have been living for centuries.

Part of such territories were officially designated as preservation areas, Indigenous or quilombola territory, and modest areas have been granted to small farmers. But all such zones have been constantly targeted by illegal miners, loggers and ranchers who want to expand their farmlands.

"Since 2016, when [Brazil's former President Michel] Temer took office, those invaders were given a green light to keep seizing reservations, national parks and small farms. Especially under President Jair Bolsonaro, that process has been resulting in great devastation," Bellini said.

The invasions at times involve setting fire to large land extensions, which can cause uncontrolled wildfires. In the years of 2019, 2020 and 2021, there has been an outstanding number of wildfires in the Amazon as a result of deliberate human action combined with severe droughts.

But new models of producing in the Amazon and organizing its peoples point to change. Bellini explained that over the past few decades many groups have been able to set up sustainable development projects in areas of land reform.

That is the case of the initiative promoted by the late U.S.-born Sr. Dorothy Stang in Anapu, Pará State, in association with local small farmers and forest collectors. Stang, a Sister of Notre Dame de Namur, was shot dead in 2005 by hitmen hired by big ranchers who opposed her project and wanted to grab its lands. But the work is ongoing with the help of Stang's colleagues.

Such initiatives have also been congregating Indigenous and quilombolas in other areas of the rainforest, Bellini added. "And it is not a coincidence that invaders have been attacking exactly the lands where such guardians of the rainforest live," she said.

'Traditional knowledges and science can work together against the destruction of the Amazon.'

Local forums have been connecting traditional peoples and scientists in the pursuit of new models for the Amazon. That is the case of the Pan-Amazon Social Forum (known as FOSPA in Portuguese). In October 2021, a meeting gathered activists and scholars in Belém, Pará State, in order to discuss the protection of the rainforest.

"It demonstrated that traditional knowledges and science can work together against the destruction of the Amazon," affirmed Comboni Fr. Dario Bossi, a founding member of the Brazilian bishops' conference's Commission for Integral Ecology and Mining.

Bossi explained that church activists have been organizing resistance in a "continuous and silent way, among the people, on a daily basis."

"That is the case of the Pan Amazon Ecclesial Network [known as REPAM] and the Latin American Ecumenical Churches and Mining Network. But of course, there is a disproportion when we compare such efforts with the powerful arrogance and violence of those who attack the Amazon," he said.

Italian-born Fr. Luigi Ceppi has been living in Acre State since 1984 and took part in several initiatives that involved another way of occupying the Amazon. A close friend of late rubber tapper and labor leader Chico Mendes, murdered in 1988, Ceppi has been supporting groups that try to "go with the Amazonian rhythm."

"The mass movement led by Chico Mendes those years realized that there was a project to occupy and destroy the Amazon, and denounced it on several occasions. Now we are beginning to see the consequences," he told EarthBeat.

In Ceppi's opinion, it is not desirable to simply reproduce the ideas that have been successful in other regions. 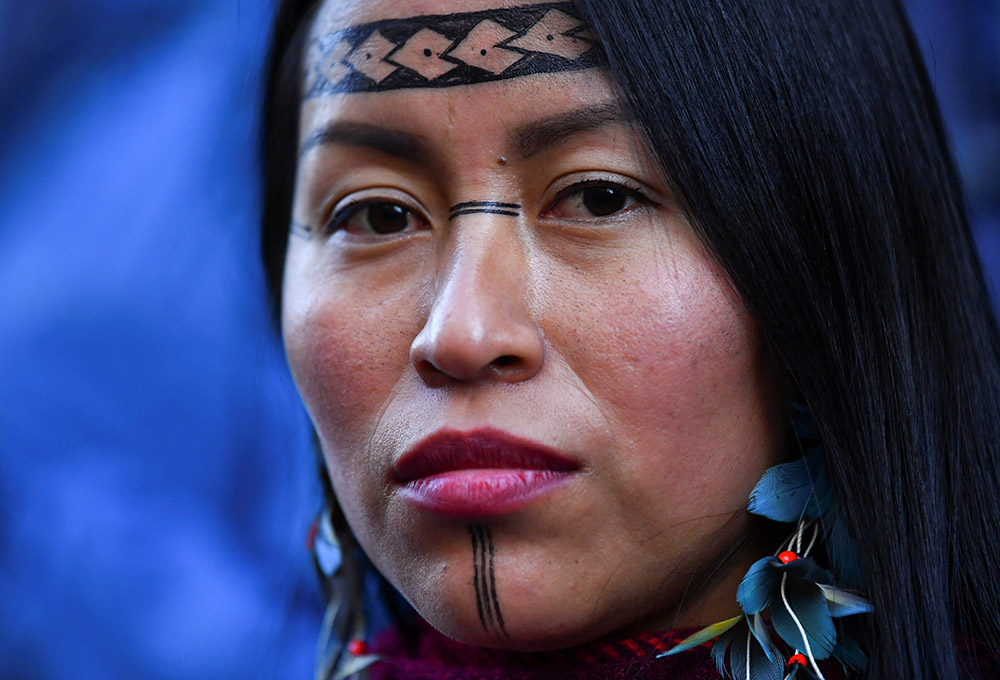 An Indigenous woman takes part in a protest outside the U.N. Climate Change Conference in Glasgow, Scotland, Nov. 10, 2021. (CNS/Reuters/Dylan Martinez)

"You cannot establish an industrial plant to process the forest's products, like Brazil nuts for instance, and provoke a concentration of people in a specific area. That would result in favelas, on the one hand, and in empty forest territories, on the other — which would be invaded by agribusiness," he argued.

That is why he has been supporting projects involving cooperatives, popular associations and Indigenous organizations established by popular leaders.

"We need to empower civil society to manage their own forms of producing food and other necessary items without harming the Amazon. We cannot depend on external funding or the government," he reasoned.

In his opinion, some good news from the past decade has been the emergence of several Indigenous social movements.

Indeed, Indigenous groups all over the Amazon have been establishing associations to struggle for their land rights, health care and education. Bellini said that such trends can be noticed by looking at the past years' official statements released by the Land Pastoral Commission.

"Many of them began to be co-signed by Indigenous associations lately," she confirmed.

Several Indigenous leaders have also surfaced over the past few years. One of them is Junior Hekurari, a member of the Yanomami people who is in charge of monitoring the health care system that serves their territory. 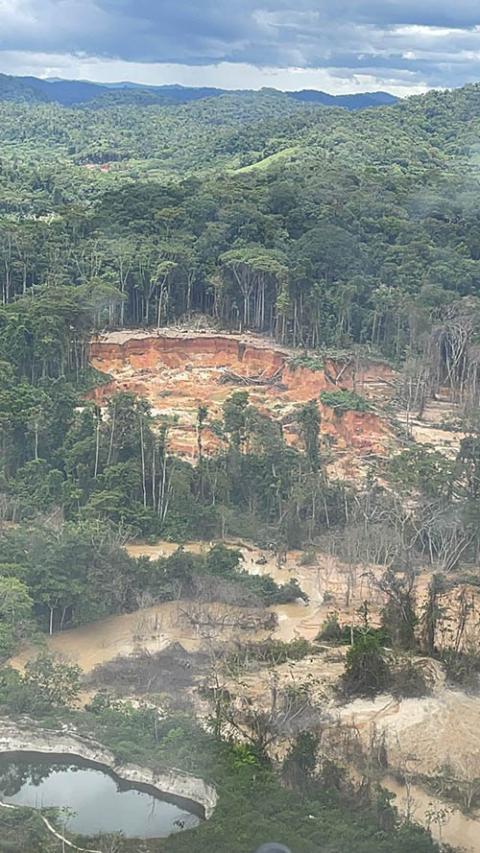 Since last year, Hekurari has been continually denouncing the invasion of the Yanomami territory by illegal miners. Indigenous associations estimate that more than 20,000 of them are currently operating in Yanomami territory — which houses 26,000 indigenous people.

"They have been destructing our land since the 1980s. But now they are here in large numbers. You hear planes and helicopters bringing people and machinery here all the time," he told EarthBeat.

Hekurari explained that the miners leave behind a trail of devastation. They not only deforest large areas and pollute rivers with chemicals, but also open great pits that never recover.

"Nothing grows again in such holes. Stormwater fills them and remains steady, working as hatcheries of malaria mosquitoes," he lamented. Over the past two years, there has been a surge in cases of malaria among the Yanomami, especially victimizing the children.

Hekurari had the opportunity to see how the destruction provoked by miners can impact other areas where they are not directly present. "The devastation is not concentrated only where they spill machine oil and chemicals used in mining. There is a noticeable effect in other parts of the territory," he described.

As president, Bolsonaro has tried to legalize mining operations in Indigenous territories. Now, the Brazilian Congress — mostly formed by his backers — is about to analyze a bill that will allow it.

Environmentalists and Indigenous groups have been demonstrating against the measure, which has also been criticized by the association of big mining companies in Brazil. But there is much pressure among other segments for its approval.

In Bossi's opinion, "It is not the time for optimistic or pessimistic views concerning the Amazon, but for immediate and strong action."

Hekurari hopes that something can be done to change that scenario of devastation before it is too late. "I am very worried about it," he concluded.