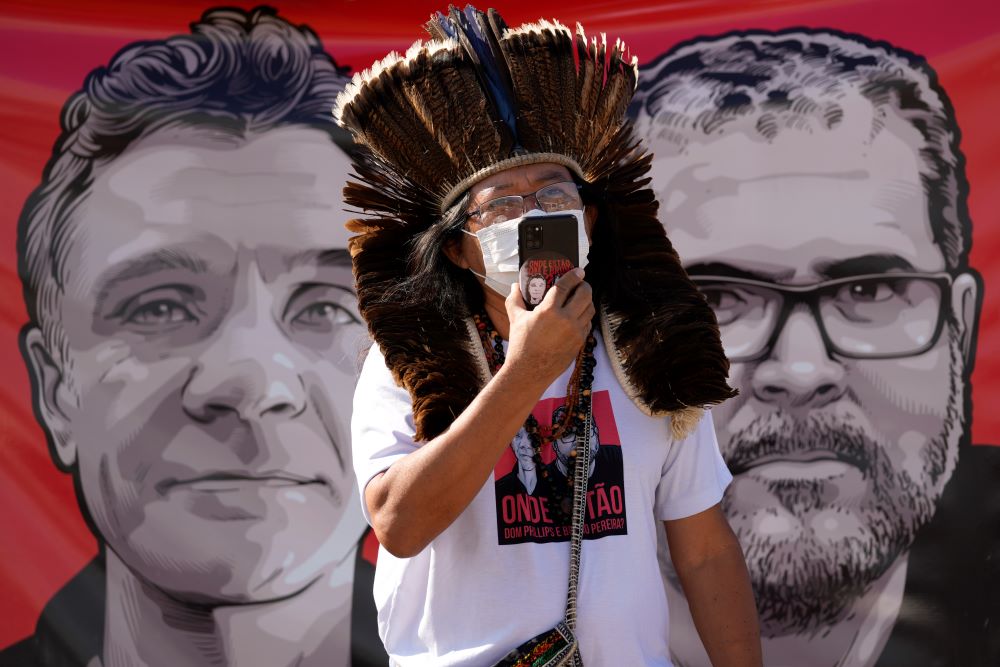 Indigenous leader Kamuu Wapichana stands in front of a banner that show images of missing freelance British journalist Dom Phillips, left, and Indigenous expert Bruno Pereira, during a protest asking authorities to expand the search efforts for the two men, in Brasilia, Brazil, June 14. A local fisherman confessed on June 15 he had killed the men. (AP/Eraldo Peres)

A British journalist and a Brazilian indigenous defender went missing on June 5 in a conflicted area in the Amazon, the Javari River Valley, where illegal poachers, miners and loggers have been invading indigenous territories with increasing violence over the past few years.

A local fisherman confessed on June 15 he had killed Dom Phillips and Bruno Pereira, saying he had quartered their bodies and incinerated them. Their deaths are part of ongoing tension between Indigenous communities and environmental activists and those responsible for illegal activity and the Brazilian government.

Living in Brazil since 2007, Phillips wrote dozens of articles about the Amazon's deforestation for the British newspaper The Guardian and was visiting the region to gather information for a book about the rainforest.

Phillips was accompanied by Pereira, an expert in Indigenous issues who worked for years with uncontacted groups in the Javari Valley as an employee of FUNAI, Brazil’s national Indigenous foundation.

Pereira had taken a leave of absence from his job with FUNAI in 2019 — the same year President Jair Bolsonaro took office — after being removed from his position as the general manager of isolated Indigenous groups. Shortly before his dismissal, he had led an operation to destroy dozens of dredgers controlled by illegal miners inside the Yanomami territory. 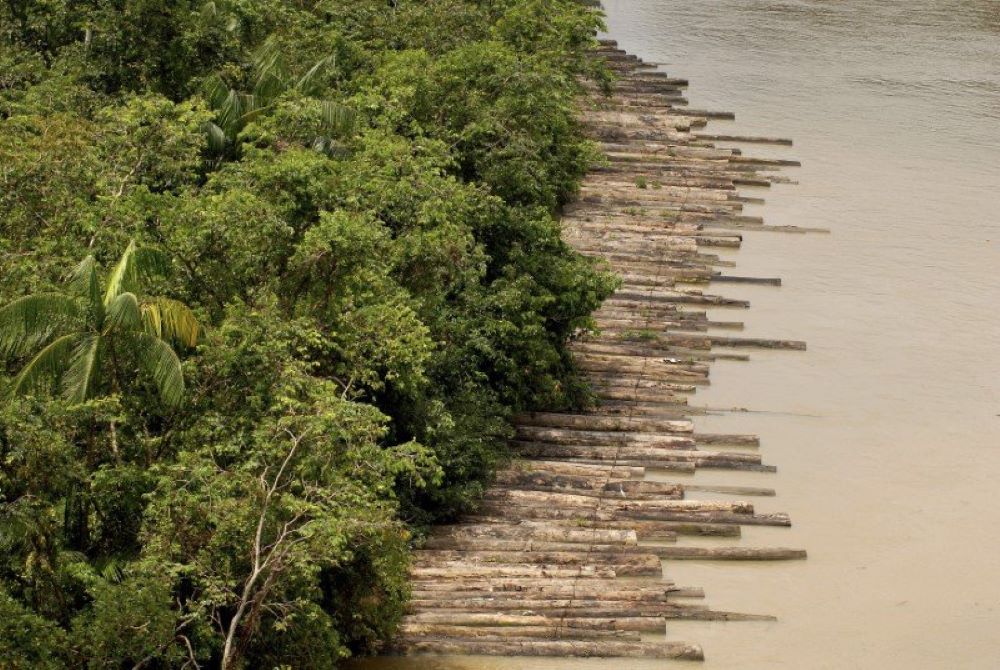 Illegally logged timber, which had been confiscated, is floated down the Guamá River Delta in the northeastern state of Para, Brazil, in this April 14, 2010, file photo. (CNS/Reuters/Paulo Santos)

Phillips and Pereira had attended a meeting with the members of an Indigenous community and were heading to the city of Atalaia do Norte in a boat. They never arrived at their destination.

Witnesses saw Amarildo da Costa de Oliveira, a fisherman, go after them in a boat. De Oliveira was arrested three days later in connection with the men's disappearance. Traces of blood were found in his boat and sent for genetic testing. The suspect's brother, Oseney da Costa de Oliveira, is also in police custody.

At the beginning of June, de Oliveira was caught attempting to invade the Indigenous area and threatened Pereira and members of the Javari Valley's Indigenous Peoples' Union, or Univaja, the local Indigenous organization where Pereira was working as an adviser.

On June 15, de Oliveria confessed, according to federal police. He was taken to the crime scene and showed the police where the men's remains were buried. The remains were sent to a laboratory in Brasília.

Before de Oliveira's testimony, some of Phillips' and Pereira's belongings were found, including a backpack and a notebook. Organic matter, apparently human body parts, was also collected and sent for analysis.

The Bolsonaro administration's inaction in the case — the government was accused of taking too long to deploy military troops to rescue Phillips and Pereira — and the president's controversial commentaries on it — he implied that they should have been more careful and called their journey an "adventure" across a notoriously dangerous region — reflect the way the administration is dealing with crime in the Javari Valley. 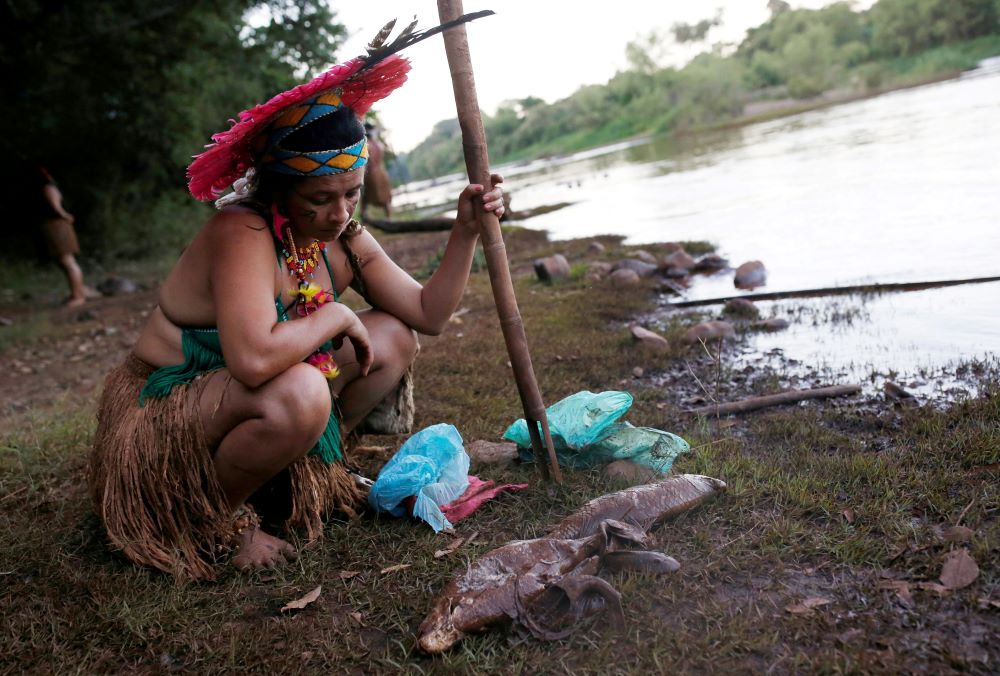 A woman from the Pataxo Ha-ha-hae tribe looks at dead fish near the Paraopeba River after a tailings dam owned by Brazilian mining company Vale SA collapsed near São Joaquim de Bicas, Brazil, in this Jan. 28, 2019 photo. (CNS/Reuters/Adriano Machado)

Indeed, one of Univaja's most important actions has been the organization of monitoring groups formed by Indigenous volunteers who inspect the valley and try to ensure that poachers and miners stay away.

"We have been raising the number of volunteers in the area because the government has been failing to send enough personnel," explained Eliesio Marubo, a member of the Indigenous Marubo people and Univaja's attorney.

Marubo said that threats from the invaders have been growing lately. Illegal fishermen — who fish illegally inside Indigenous territories — have also been growing more violent, including shooting at FUNAI workers during monitoring operations.

"Our monitoring action has been fruitful. We produced several reports concerning the territory's invasion and sent them to the federal police. That is why attempted attacks against us have also been more frequent," he told EarthBeat.

'To defend the Indigenous territories is to defend the environment.'
— Jesuit Fr. Urbano Mueller

According to Jesuit Fr. Urbano Mueller, an activist with the National Conference of Brazilian Bishops' Indigenous Missionary Council (known as CIMI) working in the Javari Valley, violence has intensified since Bolsonaro was elected in 2018.

"His preaching in favor of loosening gun control and the way he has been weakening FUNAI and other agencies for the protection of the Amazon and its peoples have opened the doors for invaders," Mueller told EearthBeat.

He explained that the Indigenous peoples are the "best protectors of the environment, so their territories are the ones where the rainforest has been most preserved."

Mueller said that there are powerful groups behind the illegal poachers and miners — "including politicians" — and that drug traffickers have also been operating in the valley.

On June 13, dozens of Indigenous protesters marched on the streets of Atalaia do Norte to repudiate violence and to ask the government to speed the inquiry concerning the case of Phillips' and Pereira's disappearance.

"Along with the people of the parish of San Sebastian of Atalaia do Norte, our religious community Daughters of St. Anne, and CIMI … we express our feeling of sadness," affirmed Xaverian Fr. Zezinho Leoni, who is a vicar in the city.

Related: REPAM launches 'I vote for the Amazon' campaign ahead of Brazil election
Related: Brazil's bishops raise their voices against mining on Indigenous land

Leoni affirmed that he accompanied the Indigenous demonstration this week, "which manifested the reality of neglect and disrespect to their lands, to the forest and to the territory's waters they now face."

"We are still waiting for answers concerning the rescue operations and demand from the authorities, along with the Indigenous peoples, the respect to the Constitution, which secures their right to their territory and to their traditional way of living," Leoni said.

The Javari Valley is home to at least 14 uncontacted Indigenous groups, estimates CIMI. Called "free peoples" by CIMI, such groups have endured violence many times in the past and decided to avoid any contact with the rest of Brazilian society.

But the actions of illegal miners, loggers and poachers impact the lives of uncontacted groups too, because they end up drinking contaminated water and having more difficulty hunting and fishing.

"I fear that within 10 years or so, with the growing destruction of the rainforest, such peoples will not be able to remain detached from the rest of society. They may be forced to get in touch with the invaders and violence may arise," Mueller said. 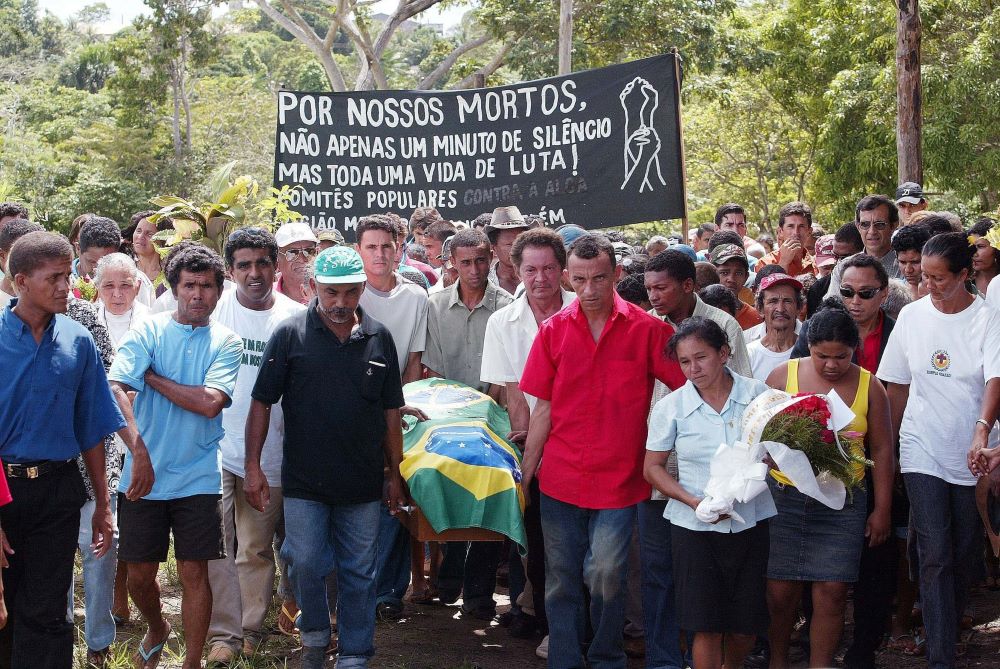 The coffin of slain U.S. missionary Sr. Dorothy Stang is carried by members of the Landless Movement during a funeral service Feb. 15, 2005, in Anapu, Brazil. Stang, a member of the Sisters of Notre Dame de Namur, is one of several martyrs who died to protect the Amazon. (CNS/Agencia O Globo/Ailton de Freitas)

In the opinion of Bishop Evaristo Spengler of Marajó, in the Amazon, who heads the Pan-Amazon Ecclesial Network (known as REPAM), crimes like the one that victimized Phillips and Pereira are "predictable."

"The Amazon is being destroyed. It starts with logging, then cattle raising, monocultures and mining. Those activities are the opposite of the traditional peoples' way of living with the rainforest. It is a model of death, which also kills the ones who try to impede its implementation," he told EarthBeat.

Spengler accused the Brazilian State of being unable to protect the Indigenous territories and to secure the lives of activists and community leaders who struggle for the Amazon and other biomes.

"The Javari Valley is a vast region which is notorious for the almost complete absence of the State," he said.

REPAM and the Amazonian church are planning to ask for a truce in the destruction of the Amazon for a whole year, Spengler said.

"The bishops from our region will visit the pope at the end of June and we will ask his support for such a truce. We want the destruction to cease, so we can stop all invasions and rethink the current model of occupation of the Amazon," he said.

He emphasized that the Amazon counts several martyrs who died to protect it, like Chico Mendes, murdered in Acre state in 1988, and the U.S.-born Notre Dame de Namur Sr. Dorothy Stang, killed in Pará State in 2005.

"Unfortunately, more of such deaths will happen," he lamented.

A version of this story appeared in the July 8-21, 2022 print issue under the headline: Church laments killing of British journalist and Indigenous defender.