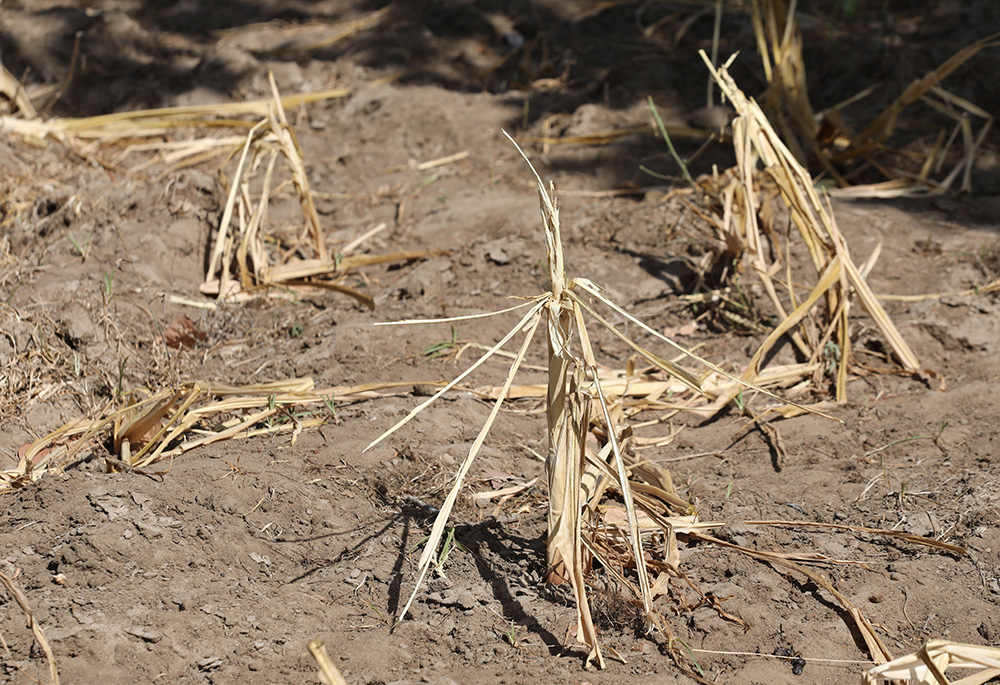 Maize stems remain dry Feb. 16 after failing because of a drought in Kilifi, Kenya. Catholic bishops of Eastern Africa, meeting in Tanzania July 10-18 examined the consequences of climate change throughout the region. (CNS/Reuters/Baz Ratner)

Catholic bishops in Eastern Africa concluded a nine-day meeting focused on the "environmental impact on integral human development," saying environmental concerns in the region can be attributed to human behavior, and suggesting actions to increase awareness of how the climate crisis is affecting local communities and how they can better care for the environment.

In a communique read during the closing Mass by Bishop Charles Kasonde, AMECEA chairperson, the East African bishops acknowledged that the ecological crisis was to a large extent a result of human behavior, reiterating what Cardinal Luis Antonio Tagle, the Vatican's top official on evangelization, said during his homily as part of the plenary's opening Mass: "Lack of fraternity or caring for other people coexists with behaviors and practices that damage creation," and "when there is lack of integral human development, fraternity suffers."

"Earth has been our home, but we have abused it, we have misused it and several adverse effects could be felt by the unpredictability of the seasons, the droughts, the cyclones, the floods," Kasonde said, speaking to the media after the plenary’s closing Mass.

The bishops from AMECEA member countries including Ethiopia, Eritrea, Kenya, Malawi, Tanzania, Uganda, Sudan, South Sudan and Zambia, as well as from affiliate member countries Somalia and Djibouti, expressed their concern over the growing threat of conflicts and war caused by a scramble for natural resources and threats to socioeconomic development and the sustainability of people's livelihoods in the region. 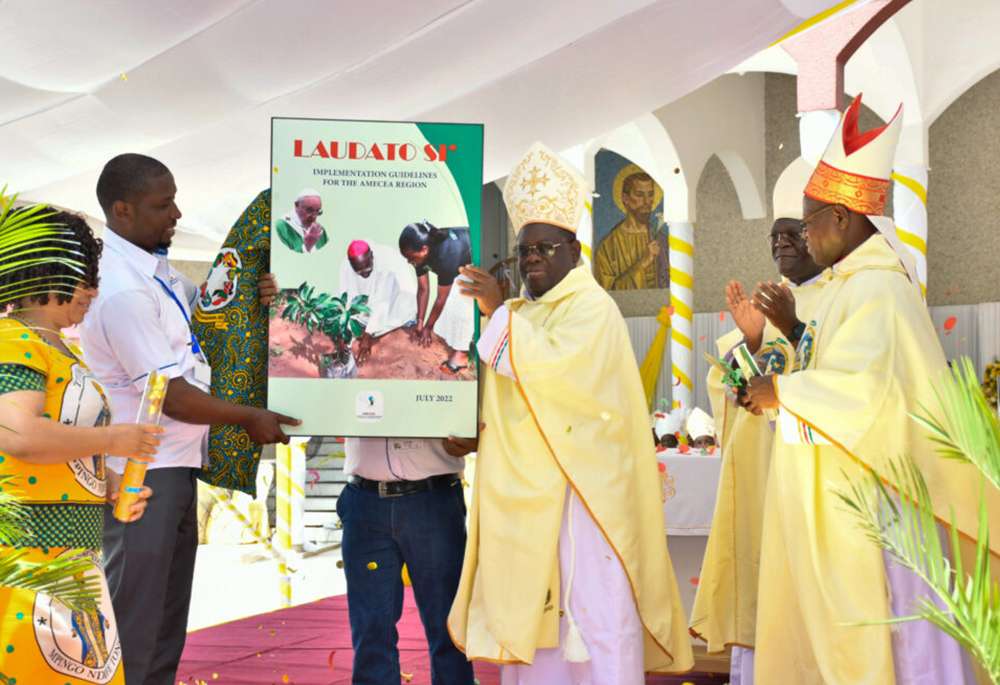 A document on Laudato Si' implementation guidelines was launched at the closing Mass of the plenary of the Association of Member Episcopal Conferences in Eastern Africa. Bishop Charles Kasonde holds the guidelines as Bishop Rogatus Kimaryo, holding scissors, watches. (Courtesy of AMECEA)

In addition, they showed concern over the rate of deforestation and contributions to pollution and environmental degradation caused by the poorly regulated mining industry.

"We express deep concern over the rate at which our forests are being depleted due to use of firewood, charcoal burning and our infrastructure construction activities while the people are not making enough efforts to replant trees. We are equally concerned about poorly regulated mining and extractive industry activities. All these are contributing to pollution and environmental degradation in [the] AMECEA region," said the bishops.

They noted also that there is need for new pastoral strategies to promote ecological justice and mitigate climate change despite the success stories shared on implementation of Pope Francis' 2015 encyclical, "Laudato Si', on Care for Our Common Home."

Amid suggested actions included in the communique, the bishops agreed that economic justice and fairness could not be adequately addressed "without providing alternatives such as promoting the use of solar and wind energy and other means of livelihood."

In stressing the urgent need for more positive examples across the AMECEA region, the bishops reiterated Francis' call for dialogue and an "aggressive sensitization campaign" in all small Christian communities (commonly called jumuiya) — small groups of families who live near each other within parish communities — and in families to "raise awareness and improve our communication with the people" about care for the environment.

"We conducted a study in the region to see how Laudato Si' has been implemented in the region and we found out that the level of awareness is way below 25%, meaning those who know more are priests, consecrated men and women, but ordinary Christians don't know anything," AMECEA social communications coordinator Fr. Andrew Kaufa said, speaking to Radio Maria Kenya Tanzania.

The bishops emphasized integrating eco-education and ecological activities in all levels of learning, including for all school-aged children and youth as well as in houses of formation for the priesthood and consecrated life, stating, "The youth must be trained and nurtured to become ambassadors of good ecological practices." 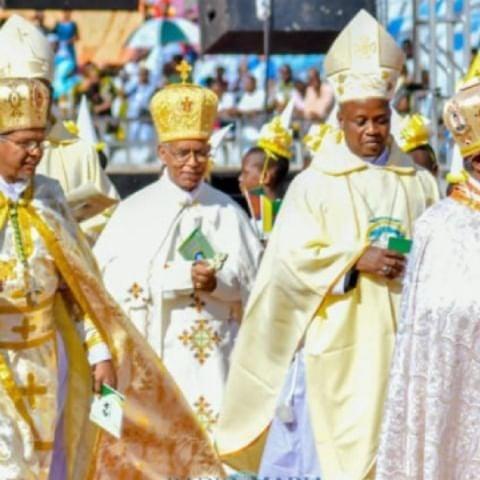 Recognizing "climate change effects are affecting every member of the society," the bishops committed to partner with the governments, other denominations and faith communities, civil society organizations and community development organizations to mobilize communities on care for the environment and to create mindset change.

They went on to add that they saw the need for "all conferences in [the] AMECEA region to strengthen their advocacy role towards environmental care policies and laws that will curb the negative human practices but in a way that is sensitive to the welfare of their people."

They appreciated various state and non-state agencies and Catholic institutions which "are already taking affirmative actions to protect the environment," including tree planting, and campaigning for cleaning cities of thin plastics and for effective waste management systems.

"In the Diocese of Morogoro, we had already started tree planting and care for the environment campaign in June 2022 in Tangeni Parish. We will continue to other parishes, and I encourage all faithful in the Diocese of Morogoro to continue planting trees, avoid activities that degrade the environment like unnecessary burning of waste, cutting of trees and polluting water catchment areas," said Bishop Lazarus Vitalis Msimbe of Morogoro, Tanzania, speaking to the media.

Making a firm commitment to respond to "the cry of the earth and cry of the poor in fulfillment of our God given mandate," the AMECEA bishops urged the faithful in the church to be " stewards of the environment and natural resources not only for the benefit of the current generation but to the future generations."

The 21st AMECEA Plenary Assembly will be held in Uganda in 2026.