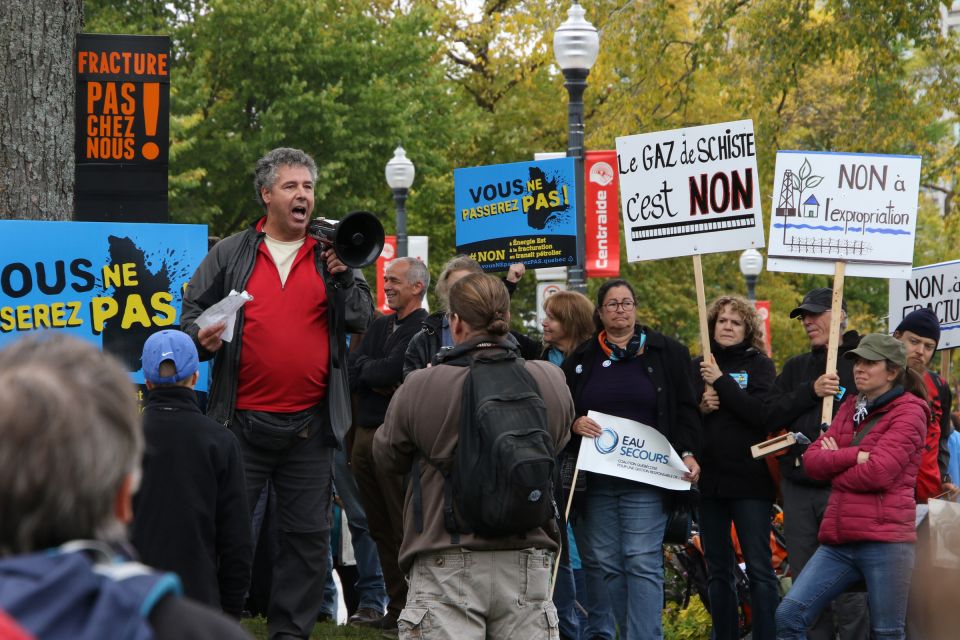 A man addresses a crowd during a pro-environment rally in Quebec City in October 2017. A statement from the Roman Catholic-United Church Dialogue in Canada embraces Christian concern for the environment. (CNS/Gregory A. Shemitz)

The declaration is contained in "The Hope Within Us," a document released July 23 from the Roman Catholic-United Church of Canada Dialogue in Canada.

"We claim that the divine presence permeates all creation, holds all together in a dynamic relationship and calls us beyond our human-centered perspective into a consciousness that affirms and respects all life and all creation," it said. "The acceleration of our technology, the rapacious ethic of progress and the greed of our economic and political systems are today wreaking havoc upon the environment and humanity."

The ecumenical document marks 40 years of dialogue between the churches. The 22-page statement draws heavily on Pope Francis' 2015 encyclical "Laudato Si', on Care for Our Common Home." On the United Church side, "The Hope Within Us" leans on the 2006 teaching document "Song of Faith."

But the ecumenical statement also relies on the desert fathers, medieval mystics and Scripture to make its case.

"Early church theologians saw the interrelationship of the Trinity through the dynamic life of creation itself," wrote the 21 dialogue participants, including two Catholic bishops. "In St. Bonaventure's trinitarian theology, every creature is a self-expression of God, and the inner structure of every creature and all creation can be said to reflect the trinitarian footprint."

"It is good theology," said Dennis Patrick O'Hara, director of the Elliott Allen Institute for Theology and Ecology at St. Michael's College in Toronto. "(It) accurately and faithfully reflects the current discussion at the forefront of the Roman Catholic and United Church traditions."

That churches are working together on climate change is particularly significant.

"Let's be serious. If you're dealing with a planetary crisis, as we are, this is not a time for quibbling about barriers between us. It's a time to be finding common voices for the common good of our common home," O'Hara said.

The most significant common ground at play is how both Catholic social teaching and the United Church's social gospel tradition recognize the importance of social sin, said Dominican Father Prakash Lohale, director of ecumenical and interfaith affairs for the Archdiocese of Toronto.

"It's not so much something to feel guilty about, but because we can make that conclusion that creation also is holy -- Pope Francis talks about it as a sacrament -- then I think the concept of social sin could make people conscious," Lohale said.

Ecumenical dialogue provides an opportunity for religion to engage with the most important questions of our time, he added.

"We have long traditions of schisms and differences in theology," he said. "But it's like Pope Francis said during his visit to the World Council of Churches in Geneva. 'Let not our differences stop us.'"

The statement should make it easier for Christians of all stripes to think about ecological issues as matters of faith, said Gail Allen, United Church staff support for the dialogue.

"There are people of faith who are struggling to think through these issues and just want to do it out of their faith," Allen said.

To help parishes and congregations act on the new document, it includes a liturgy for use during Earth Hour, which has been observed in recent years at 8:30 p.m., March 30, in each time zone worldwide.

Allen recognizes that Canadians have conflicting views and conflicting commitments when it comes to climate change. But Christians who make a living in the Alberta oil sands should not feel they are under attack, she said.

"Any move toward a different way of being does need to take into account how we are going to all work together as communities to find new possibilities for people's livelihoods that will be less harmful to the climate," she said.