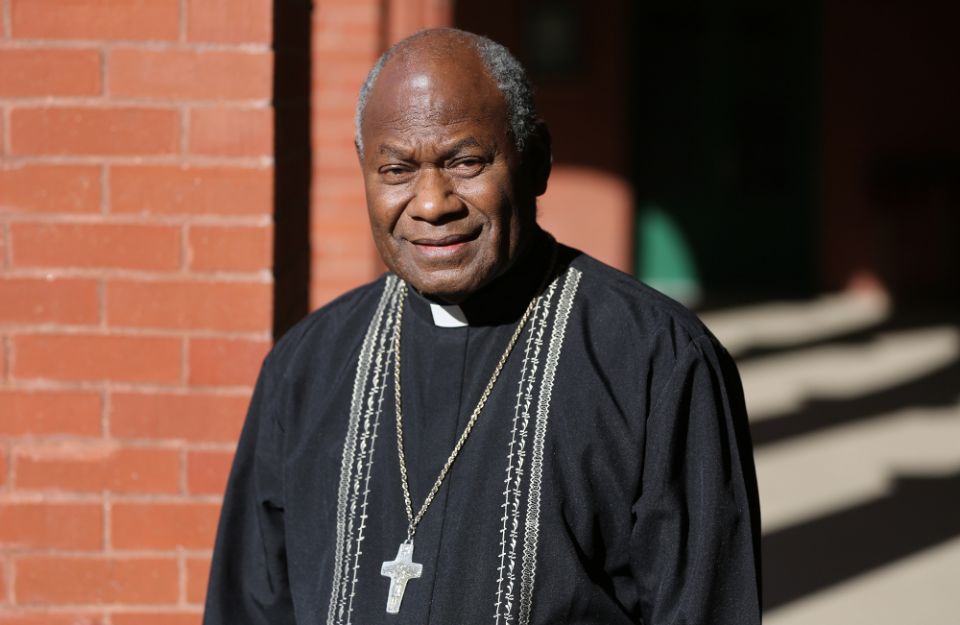 Rising seas and new technology to mine beneath them are forefront concerns these days for Cardinal John Ribat of Papua New Guinea.

During a 12-day U.S. trip along the East Coast that concludes March 22, the head of the Port Moresby archdiocese on the South Pacific island nation has in numerous settings expressed his worry with the continuing impact of climate change on his and other islands, as well as the development of first-of-its-kind deep seabed mining in waters off his homeland.

Ribat, 61, has long spoken out about the impacts of climate change on the people of the Pacific islands, considered one of the ground zeros of global climate change, where rising seas have submerged portions of islands and have already led to communities relocating from their homes to nearby islands.

Last week, Ribat raised his concerns about climate change again on Capitol Hill in meetings with Sen. Edward Markey (D-Massachusetts) and officials for Sen. Jeff Markley (D-Oregon). Both sit on the Senate Committee on Environment and Public Works, and its subcommittee on fisheries, water and wildlife.

In their meeting, the cardinal pointed out on a map to Markey, who is Catholic, the locations of the islands as he described how rising seas have forced people to relocate farther inland every few years as the tides rise and come in farther themselves.

On Bougainville, one of Papua New Guinea's roughly 600 offshore islands, the diocese has offered a piece of land to help people resettle from the Carteret Islands, which have shrunk under rising ocean tides. Ribat said that during a trip around Easter last year to Ahus and Andra islands he witnessed similar scenes of shorelines and agricultural lands that had washed away.

Sea level rise is driven by two primary factors: the oceans expanding as waters warm, and increased water mass due to melting ice from glaciers and ice sheets. According to a climate science special report, published in November and compiled by 13 U.S. federal agencies, global mean sea levels have risen roughly 7 to 8 inches since 1900 — three inches since 1993 — with human-driven climate change making "a substantial contribution" during that period. Scientists project further rise of 1 to 4 feet by 2100 and have not ruled out a rise as high as 8 feet.

"When you're on an island, you get it, when you got to keep moving your house," said Franciscan Fr. Michael Lasky, who helped organize the cardinal's trip.

In the Capitol Hill meetings, Ribat also raised another problem accompanying rising tides: seawater seeping into the freshwater table underground and turning some crops inedible. "When they harvest them it's salty. They cannot eat them anymore because the sea is rising," he said.

The impact of rising seas on clean water came up as well during a meeting March 15 with officials at the U.S. Environmental Protection Agency. He also reiterated concerns he shared with the senators' offices about new seabed mining technology set to begin next year in waters east of Papua New Guinea.

Nautilus Minerals, a Canadian-based company, in 2011 received a mining lease from the Papua New Guinea government for extracting deposits of copper and gold from the floor of the Bismarck Sea. The project will be the world's first attempt at mineral extraction from the deep sea.

The mining operation — which would occur 1,600 meters, or nearly 1 mile, under the sea about 20 miles off the western coast of New Ireland and 31 miles north of New Britain, both islands east of Papua New Guinea — is set to begin in 2019. According to Nautilus, the deposits of the deep sea Solwara 1 Field ("salt water" in the Tok Pisin language native to Papua New Guinea) contain copper and gold at grades much higher than typically found in land-based mines.

The potential mining site holds added significance for Ribat, who calls home Watom Island, off New Britain's north coast. While on the island at Christmas, fishers shared with him anxieties over how the mining may impact fishing grounds. During meetings with U.S. government officials, the cardinal described the seabed mining process as "taking the lawnmower over the reefs where people fish," according to Lasky.

Ribat told NCR he is concerned that the project does not include the necessary oversight and monitoring of any underwater mining operations, particularly since the machines would be remote-controlled from a large sea vessel, and that not enough is known at this point to what effects such mining will have on local marine life and people reliant on fishing and the sea for their livelihoods. A particular concern is the mining operation's proximity to a tuna breeding ground.

"There's no clear information about how or what the negative effect it will bring to the environment and also to the marine life that we have," he said.

In an August 2016 statement, the Federation of Catholic Bishops Conferences of Oceania, of which Ribat is president, voiced their opposition to seabed mining, and instead endorsed sustainable development in coastal communities through tourism, fisheries and agriculture.

"The sea is a treasure for all and should never become a 'playground of exploitation,' " the statement said.

"When you're on an island, you get it, when you got to keep moving your house."

Ribat suggested it would be best "to delay this operation until we have people better prepared to assess and monitor this operation, so we're not destroying the environment for the sake of just testing this technology."

In an emailed response to NCR, a Nautilus Minerals spokeswoman called the Solwara 1 site "one of the best studied deep sea ocean sites on the entire planet," and said the company's work has been reviewed by external independent experts for the Papua New Guinea government and the International Seabed Authority.

"All of these reviews have confirmed that seabed mining has limited environmental impacts, and has positive net benefits," said Noreen Dillane, corporate communications manager for Nautilus Minerals.

She said that "independent expert observers" chosen in consultation with nearby provinces would be aboard the vessel to ensure compliance with the permit conditions. Its environmental impact statement, completed in 2008, found there would be no impacts from mining on reefs or tuna fisheries, and that any impacts would be limited to a 27-acre area and beneath 1,300 meters (.8 miles) below sea level.

Critics of the seabed mining project contend there has been no independent environmental study and the present one contains gaps. In December, the Guardian reported that the Centre for Environmental Law and Community Rights, in Port Moresby, filed suit on behalf of several coastal residents over the operation, alleging that key documents were withheld and that residents had a constitutional right to that information. They have also questioned the relationship between Nautilus and the Papua New Guinea government, which holds a 15 percent share in the Solwara 1 project.

Dillane said that Nautilus has conducted "regular awareness meetings" in the coastal communities near the project site and has reached more than 30,000 people through such programs since 2008. She added that information sessions were being held in the western coastal areas of New Ireland this week.

As for communication with Ribat, Dillane said Nautilus Minerals and the government have made numerous attempts to meet with him.

"To date the Cardinal has not accepted any of these attempts to meet in person to discuss the topic, and provide him with all the independent expert advice in person. Similarly, the Company has never been approached by the Federation of Catholic Bishops to provide information on the Project, or to discuss their concerns one on one," she said in an email. 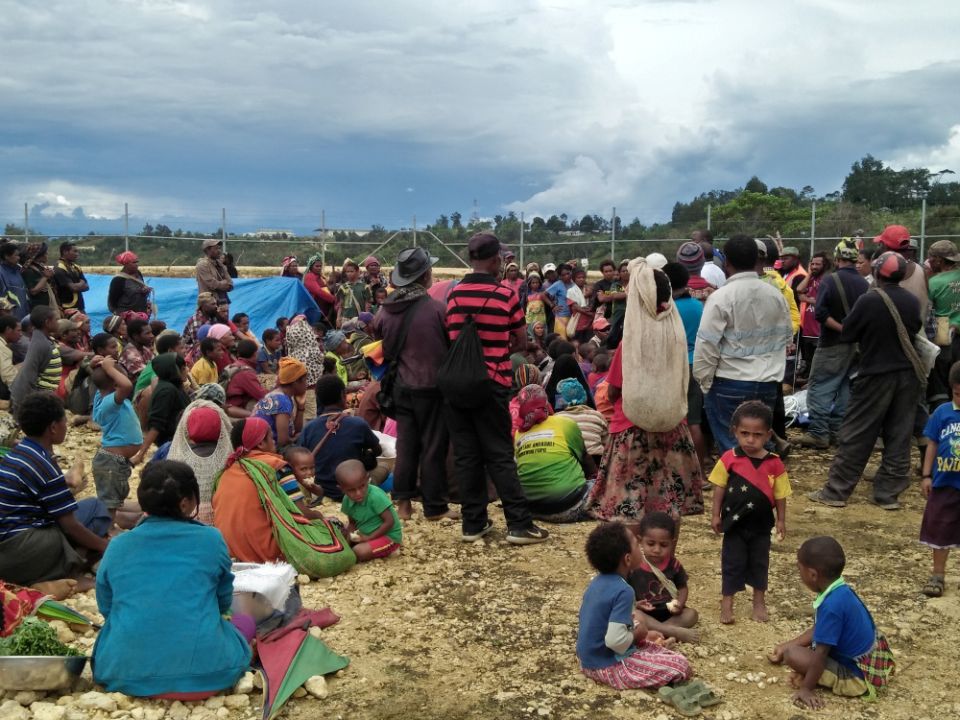 The cardinal said he hoped his visit to Capitol Hill and EPA headquarters would raise awareness of what's happening in the South Pacific and amplify efforts to address issues they're facing, given that other islands in the region are U.S. territories.

While also in Washington, Ribat, who was elevated to cardinal in November 2016, spoke about climate change and mining March 13 at the Catholic University of America, and later met with a group of roughly 80 religious seminarians to talk about his vocation.

Before departing for home, he was set to meet in New York with members of Franciscans International, the religious order's NGO at the United Nations, to further discuss sea rise and seabed mining. He was also scheduled to meet March 21 with Karenna Gore, the founder of the faith-based Center for Earth Ethics at Union Theological Seminary; Gore is also the daughter of former vice president and climate activist Al Gore.

It was an award from the Church of St. Ignatius Loyola, in New York City, that spurred the trip for the first cardinal of his island country. On March 11, Laetare Sunday, he presided at Mass and was honored with the parish's Loyola Medal, which recognizes people who have made significant contributions to their community.

"Our [parish] Lenten theme is healing," Elizabeth O'Sullivan told NCR. "And we believe that Cardinal Ribat's work in climate change, which is healing on a global level, is worthy of acknowledgement and worthy of honor."

Throughout his time in the U.S., Ribat has received updates from Papua New Guinea about the aftermath of an earthquake that rocked the island in late February.

In the early morning Feb. 26, a magnitude-7.5 earthquake struck the Southern Highlands province, that along with a landslide, has killed at least 145 people and displaced upwards of 35,000 others. The inland region is a remote part of the island, overlapping with the Mendi diocese led by U.S.-born Bishop Donald Lipert, which has made relief efforts and communication more difficult.

"The earthquake has been very devastating," Ribat said.