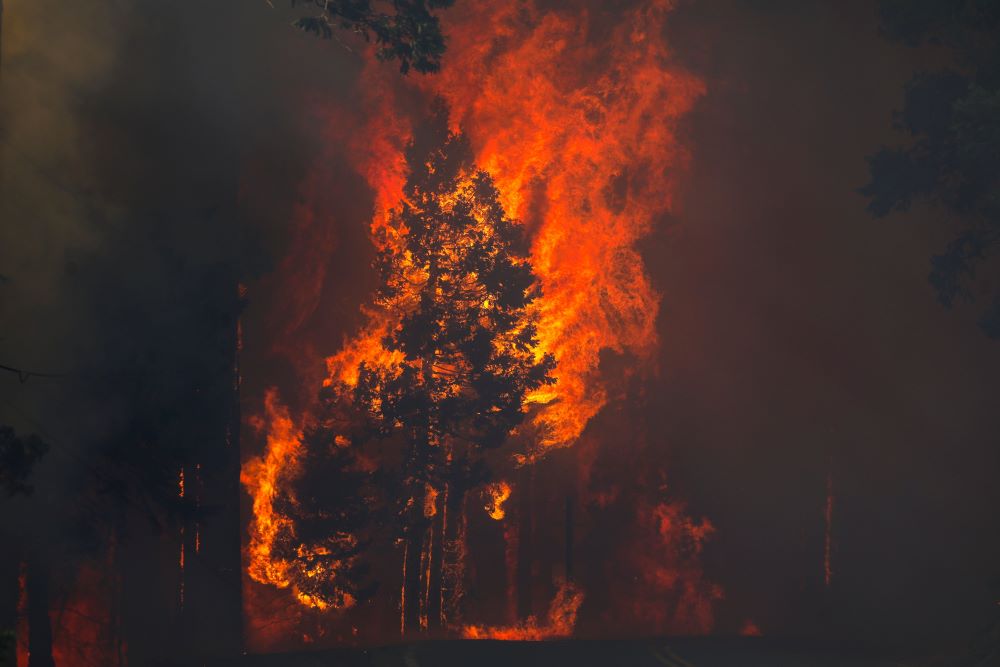 "We had about 85 disasters," in the United States this past year, said Kim Burgo, vice president for disaster operations for Catholic Charities USA.

"Charities agencies don't just respond to a disaster because it was declared so by the Federal Emergency Management Agency," she said, noting that its agencies also respond to local events, like floods, which impact local communities.

Burgo is part of a staff of four monitoring disasters and helping collaborate with local affiliates wherever possible. She said the West Coast wildfires and major storms such as Hurricane Ida were some of the top disaster priorities of the past year, along with floods, tornados and winter storms in the Midwest and the South.

"We do not have unlimited resources, so we have to be careful with the funds we have, but we don't turn away any disaster that a (local) agency has, and even the smallest ones are important to the local community," Burgo told Catholic News Service.

Catholic Charities USA supports the local disaster response through financial assistance, technical support and, in the case of a late August landfall of Hurricane Ida in Louisiana, virtual deployment of case managers as a coronavirus surge was complicating logistics.

For Hurricane Ida, Catholic Charities estimates that local agencies assisted 10,000 families through gift cards and meals and over a million pounds of goods.

"We have a ton of relationships with the other disaster organizations which provide different services as well," Burgo said, noting that the hurricane drew an immediate and sustained response.

Often the response at the local level can last five to seven years, and there are many places in the country that have preexisting economic challenges, "so you end up with a bad hurricane or tornado in a place where they never really recover before the next one comes, and you end up with a constant state of recovery," she said.

One unusual event for the 2021 history books was the deadly Surfside condominium collapse near Miami in late June. The 12-story Champlain Towers residential collapse resulted in 98 deaths. It also left many survivors displaced in the subsequent months.

"That was an absolute tragedy, and Catholic Charities was there responding with mental health needs, helping people rebuild their lives and joining a consortium of assistance to help people get their medications and funeral expenses for loved ones met through case management, " Burgo said. 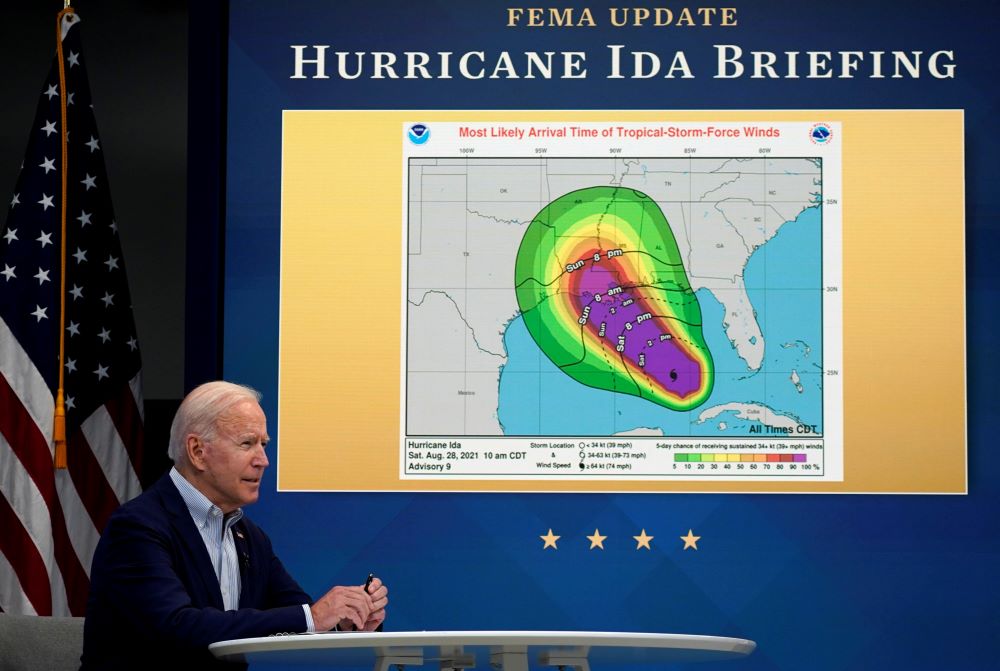 The COVID-19 pandemic in 2021 also prompted disaster response planners to think outside the box because they couldn't rely on the model of placing survivors in massive shelters. Instead, they moved to putting fewer people in more shelters or even hotel rooms.

Also, people seeking assistance were not able to walk into Charities' outreach offices due to social distancing, so there was a continued move toward distribution sites, drive-by distributions and virtual case management programming.

And the second year of the pandemic continued to take an economic toll on communities, as people lost jobs and housing grew more scarce and more expensive.

"The cost of housing, housing availability, eviction issues. The poor and vulnerable are most at risk, and all of this goes way beyond handing out water: These are the complicated issues you are trying to resolve every day," Burgo said.

Beyond the American borders, an August earthquake in Haiti was complicated by a deteriorating political and security situation in that Caribbean nation. A December typhoon hit the Philippines, and summer flooding wreaked havoc in Germany and Belgium, while China, India, Nepal and Indonesia experienced various floods, volcanoes and cyclones.

Kim Pozniak, senior director of global communications at Catholic Relief Services, said that in the past year CRS spent about $380 million on emergency response programming, which accounted for 42% of yearly total expenditures. The funds went toward comprehensive relief and recovery efforts in response to natural and man-made emergencies across 60 countries — benefiting 15.8 million people.

In Central Asia, CRS is anticipating that the 2021 Taliban takeover of Afghanistan and the worst drought there in recent memory — compounded by the pandemic's effects — will likely result in a hunger crisis putting 23 million people in danger of starvation.

"This coincides with the start of the winter lean season when food supplies from harvests are exhausted, and families face shortages even in the best years. But this year the winter threatens extraordinary hardship and widespread loss of life, particularly among young children," Pozniak told CNS. 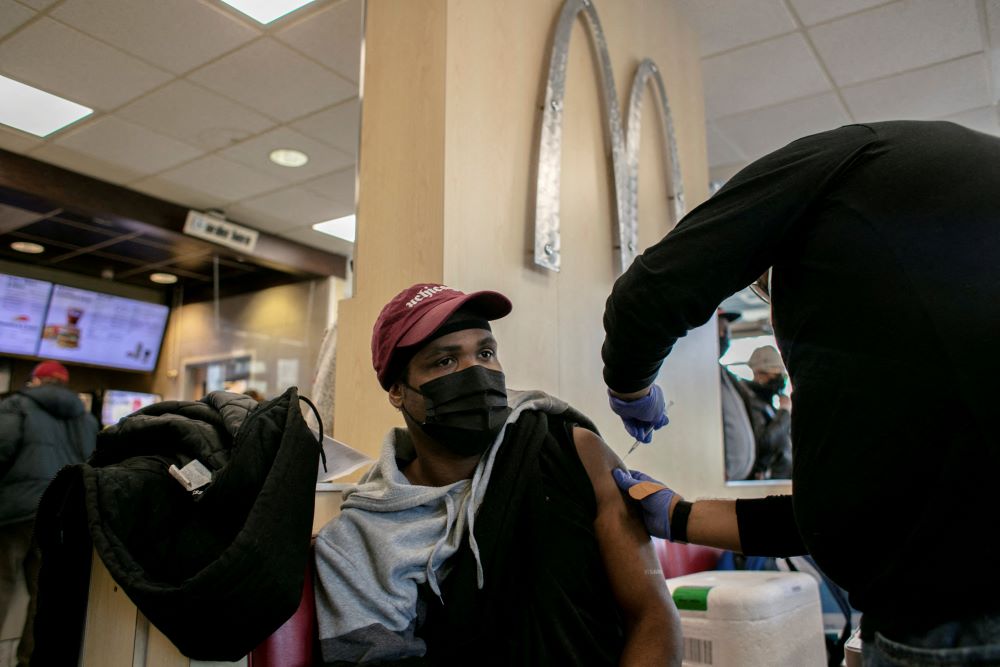 A man in Chicago receives a COVID-19 booster shot at a McDonald's Dec. 21, a day after the U.S. Centers for Disease Control and Prevention reported that the omicron variant had become the dominant version of the coronavirus in the United States. (CNS/Reuters/Jim Vondruska)

In Madagascar, more than 1 million people are struggling with food insecurity following several years of drought that is being attributed to climate change. Carla Fajardo, CRS country representative in Madagascar, said the area is suffering several concurrent crises, including extreme drought, sandstorms, locust invasions and pests. The region not only suffers from a lack of rain, but when it comes, the rain is unpredictable, he noted.

And in the Sahel region of Africa — between the Sahara and the savannas in Sudan — a cycle of unrelenting violence has caused the dislocation of some 2 million people in Burkina Faso, Chad, Mali and Niger.

"The bloodshed and violent displacement will only improve if we rebuild trust between and within communities while also partnering with local leaders to deliver lifesaving care to the 14.4 million people in need," said Pat Williams, CRS program manager of the Sahel Peace Initiative.

Pozniak said despite the ongoing pandemic, giving to CRS has been strong and that while the lockdowns and restrictions might have changed how people connect, the underlying fundamentals have not changed.

"Generally, our donors are driven by their faith, and they give generously during emergencies — especially when the media coverage of an emergency spikes. We also benefit from generous public and institutional donor funds," she said.

But even with this support, she fears that "not enough attention or funding is being directed toward the urgent crises that are far from the spotlight and that critical resources have fallen short to meet humanitarian needs in many areas."