EarthBeat Weekly: Without enforcement, presidents' promises at COP26 won't save the world's forests 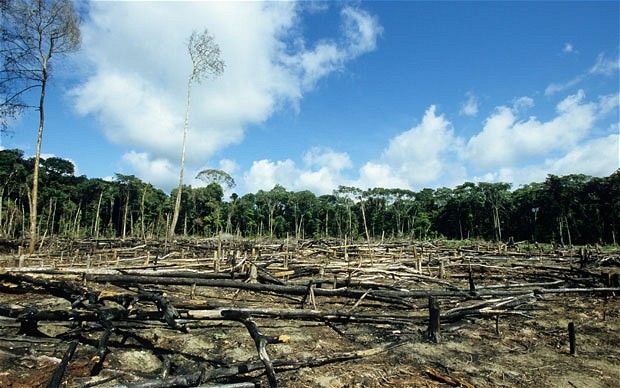 Despite a 2014 pledge by governments, corporations and others to halve deforestation by 2020, destruction of the world's tropical primary forests has increased. (Wikimedia Commons/Dikshajhingan)

The world's forests have been falling steadily to humans' stone axes, metal hatchets and chainsaws since sometime after the last Ice Age. In the second half of the past decade, the planet lost a forested area slightly larger than the state of Indiana — or about the size of Iceland — every year.

So it would seem hopeful that on Nov. 2 the leaders of more than 120 nations, meeting at COP26, the U.N. climate conference in Glasgow, Scotland, agreed to stop deforestation — a significant source of planet-warming greenhouse gas emissions — by the end of this decade.

Specifically, they committed to "working collectively to halt and reverse forest loss and land degradation by 2030 while delivering sustainable development and promoting an inclusive rural transformation."

First of all, the environment minister of Indonesia — one of the top 10 countries for both forest cover and forest loss — apparently read the fine print afterward, because two days later she backpedaled, calling the deal "inappropriate and unfair" and saying her country's development must not stop "in the name of carbon emissions."

Second, this is not the first time world leaders have made such an enthusiastic promise. In the 2014 New York Declaration on Forests, more than 200 signers — including countries, subnational governments, corporations, nonprofit groups and Indigenous organizations — agreed to cut forest loss in half by 2020 and end it by 2030. But according to the official tracking system, loss of primary tropical forests has increased by more than 40% annually since the accord was signed.

Rhett Butler at Mongabay offers this very helpful comparison of the agreements signed in New York and Glasgow, and finds that the targets in the COP26 deal are vaguer than those in the 2014 pact — not an auspicious start.

And third, the reasons why forests are being destroyed are complex and intertwined, and they vary from country to country. Tackling them means taking on powerful agriculture, timber and mining interests, as well as land speculators, organized crime and corrupt government officials. 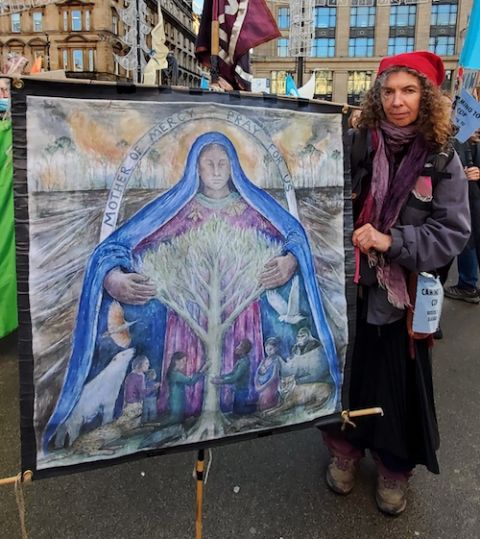 Pope Francis nailed it in a message to heads of state attending the two-day leaders summit at the beginning of the conference, when he said the task in Glasgow was to show the world "whether there really exists a political will" to take the steps necessary to stem climate change, as NCR environment correspondent Brian Roewe reported.

That will be a stretch for some of the countries with the highest deforestation rates. After years of rampant forest destruction, Brazil — which ranks second in the world for forest cover, behind Russia — became the poster child for conservation through a combination of government policies and law enforcement. But deforestation rates have been rising again since President Jair Bolsonaro took office in 2019.

Peru, where I live, ranks ninth in the world and second in South America (after Brazil) for forest cover. Here deforestation is generally blamed on smallholders who migrate from the Andes to the Amazon to clear land for farming, but the reality is far more complicated.

Land speculators illegally parcel out plots of public forest, offering land titles obtained irregularly from corrupt government officials. Narcotraffickers have made drug crops profitable, creating an incentive to cut trees and plant coca, which is used to make cocaine. They then launder money through illegal timber and mining operations that destroy more forest.

The details differ from country to country, but the overall picture is the same. Worldwide, trees are worth more dead — and out of the way, so land can be "productive" — than alive. The challenge is to change that system in a world in which consumers are oblivious to the impacts of the production of furniture, palm oil, beef and other goods on forests halfway around the globe.

There are some bright spots. The lands where the world's Indigenous peoples live tend to serve as a buffer against deforestation, but many of those communities lack legal recognition of their territories. Indigenous leaders have been joining forces in recent years with scientists, nonprofit environmental groups and even the pope to demand respect for their territorial rights. Nevertheless, murders of people who are defending their land against outsiders continue to rise.

The leaders in Glasgow also pledged to protect Indigenous territories and promote sustainable agriculture. Those are easy promises to make, but keeping them requires not just complementary domestic legislation, but also enforcement of the laws. And, as Francis said, the will to do so. I hope this time will be different, but I remain skeptical.

EarthBeat was at COP26, and here's what's new:

Brian reported from Glasgow that faith-based climate activists gathered even before COP26 started to raise a moral voice for climate action. By the end of the first week, they were demanding that world leaders and negotiators offer plans, not pledges. The commitments sound good on paper but will go nowhere without detailed follow-up steps, Catholic activists said.

Nevertheless, climate scientists and activists who are motivated by faith are not giving in to pessimism, but draw on a shared ethic of love of neighbor and responsibility for creation to stave off eco-grief, writes Elizabeth E. Evans at Religion News Service. Church institutions are also responding, including the German bishops' conference, which released its first climate protection report ahead of COP26, as Catholic News Service reports.

Also before the climate conference, Ecumenical Patriarch Bartholomew told students in an audience at Notre Dame University that they can be catalysts for ecological justice. And as the conference got under way, about 250 people around the U.S. participated in a 24-hour fast in solidarity with a group of young hunger strikers outside the White House who were calling for President Joe Biden and congressional Democrats to stick to their promises about climate action. 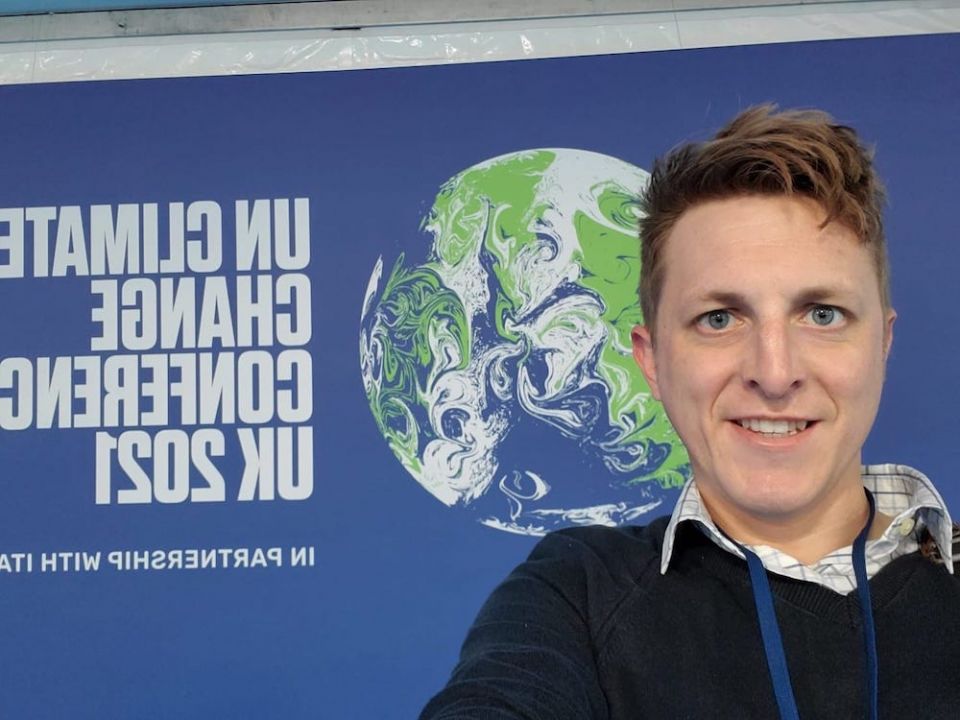 Brian has headed home from Glasgow, but before boarding his flight, he offered a behind-the-scenes glimpse of the week's activities.

"Covering a COP involves a lot of running. There is so much happening and all at once. Think of a major industry conference occurring at the same time as a high-stakes congressional vote, with election results all coming out in the midst of it," he said.

One thing that stood out was "the tension between nations and civil society, and the difference in tone between those in the main venue and those outside demonstrating or in the more publicly accessible green zone," added Brian, who found himself running the 20-minute route between the two zones to keep up with his interview schedule.

The tensions he detected demonstrate that "countries have a major credibility deficit on climate change, and that these announcements often mean little to those most impacted," he said. "So many times, people I spoke with, especially those from Africa, Latin America and the Pacific, stressed that people are dying now and that these deliberations and decisions aren't just about getting from one number to a better number, but that their communities are suffering and stand to suffer more without immediate steps."

Nevertheless, countries that are less visible on the world stage see the conference as "their forum to state their experiences," Brian added. "While some may shrug at U.N. negotiations as the pinnacle of bureaucracy — and yes, there is a slow pace and little progress in many cases, especially on climate — activists say it's necessary to help give that voice, and it's why they push so hard to make sure [affected communities] have it here."

This week, Dr. Joe Holland, Thomas Berry scholar in residence at Iona College in New Rochelle, New York, will talk with members of several thriving eco-communities about their role in the global ecological renaissance.

You can find more information about this and other events on the EarthBeat events page. And you can add your own event here.

COP26 is at the halfway point. If you've been following the news, what struck you? What would you like to know more about? Drop us a line at earthbeat@ncronline.org and help us guide our coverage in the week ahead.

If you know someone who would be interested in following those activities, please encourage them to sign up to receive EarthBeat Weekly in their inbox, along with alerts about other stories at the intersection of climate and faith.