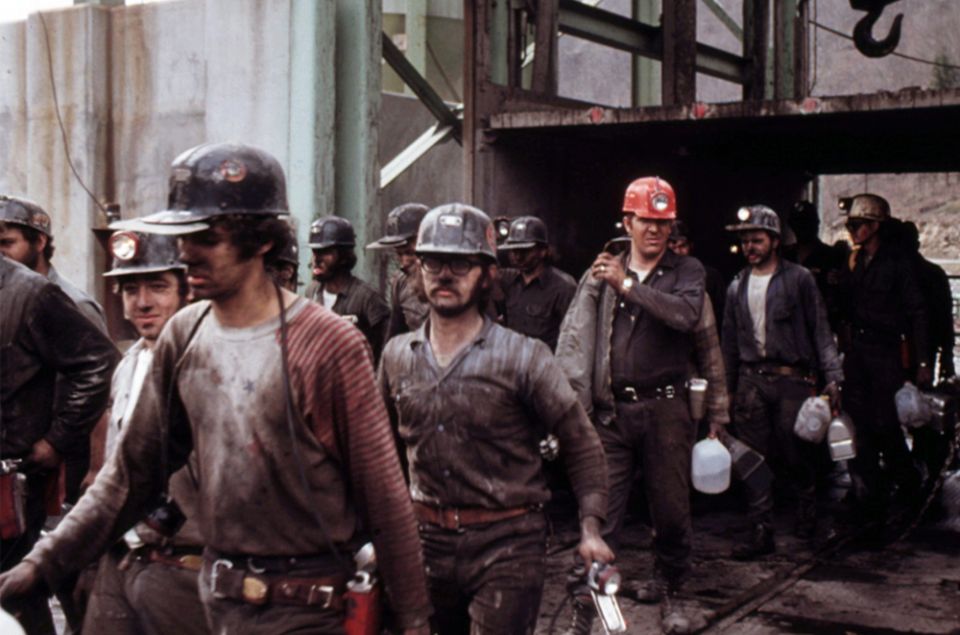 Coal miners exit an elevator after a shift at the Virginia-Pocahontas Coal Company near Richmond, Virginia, in April 1974. (Photo by Jack Corn/Creative Commons)

"Magisterium" is one of those incense-perfumed Catholic words, reeking of pomp and power. The Vatican says as much on its website, explaining that "ecclesiastical magisterium" means that teaching about what Jesus meant "is proper to the College of Bishops or to individual bishops linked in hierarchical communion with the Supreme Pontiff."

Magisterium is a top-down deal, with the pope and the bishops conveying the message of Jesus from the Throne of St. Peter to the faithful far below in the piazza and beyond.

The new documentary "Magisterium of the People" turns the term on its head. The film opens with Notre Dame Sr. Beth Davies, an elderly nun who lives in St. Charles, Virginia, deep in the heart of Appalachia, talking about her work with coal miners.

"When you're ministering to people and listening to people," she says to the camera, "I can't tell you the number of coal miners who say, 'I don't want to do this. I love these mountains, but I have to feed my children.' They're going in every day torn, absolutely conflicted."

That conflict is at the heart of this unexpected and powerful film which aired on Christmas Day on the Canadian network Salt & Light TV.

"Magisterium of the People," the latest documentary from Sebastian Gomes, was inspired by the Catholic Committee of Appalachia — nuns, priests, laypeople — who go into Appalachia to listen to the stories of the region's residents and report their findings in the form of a "People's Pastoral," playing on the church's name for an open letter from a bishop to his clergy and flock.

The group's most recent pastoral appeared in 2015, following two previous documents, in 1975 and 1995, which have been published as a book. The letters are, as the original People's Pastoral put it, a "telling of the story of 'the least among us' including Earth, our listening of that story, and the Church's response to it."

Magisterium of the People (2018) | Official Trailer

Gomes first encountered Catholic Committee of Appalachia when he read its 2015 pastoral while doing research for a follow-up to his 2014 film, "The Francis Effect," about the change Pope Francis has brought to Catholicism.

"I was really looking for stories where the impact [of Francis] could be felt by ordinary people," Gomes told Religion News Service. "Then I came across the story of The People's Pastoral and I thought this was a great story of the Francis impact."

Gomes title, he says, "is derivative of the term the Magisterium of the Poor, which was originally a concept that came out of Liberation theology. The poor have an inherent authority because Jesus recognized that authority in them."

In the film, a priest named John Rauch leads Catholic Committee of Appalachia members to eastern Kentucky to witness what Rauch calls a "mineral colony" where coal mining has enriched many but has also caused misery and destruction.

A local couple, Elaine Tanner and Jimmy Hall, gives the filmmakers a tour of their ravaged property.

"Here's where we watched the top of the mountain drop," says Tanner, pointing to a map where the coal company lopped off 500 feet of earth in search of coal seams. "We stood there helplessly as that mountain fell and the inspector says to Jimmy, 'You don't own that property — my maps say the coal company owns it.' "

The land, said Hall, has been in his family for more than six generations. For proof he walks the filmmakers through the family cemetery, pointing out headstones of the clan going back decades. Hall points to those etched with the branch of the U.S. military in which the dead once served.

"I'm as American as you can get," Hall says. "My family all supported whatever the United States said. 'You go to war,' then you go to war. And the ones that are up in that cemetery, [this land] is what they fought for. I have the letters that were sent home. They couldn't wait to get back here. Nowadays, there's a lot of people who can't wait to get out of here. There's nothing left. The coal company took it and hauled it away."

It becomes clear that Hall is hardly the stereotyped hillbilly or "Make America Great Again" booster. The film lands its punches by doing the very thing the People's Pastoral set out to do: giving voice to people who have not been heard.

"You can't argue with his patriotism," said Gomes. "Yet he's saying, 'The coal companies screwed us and now our water is poisoned and our mountain is destroyed and there's nothing we can do.' His voice is very powerful." 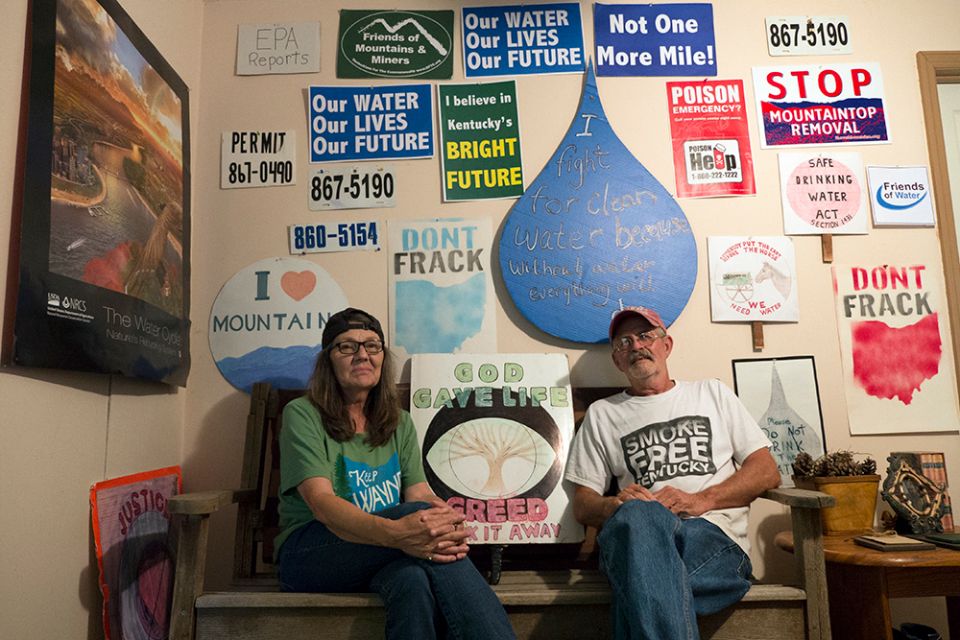 Elaine Tanner and Jimmy Hall surrounded by signage at their Kentucky home in the documentary “Magesterium of the People.” (Photo courtesy of Salt and Light)

As Catholic Committee of Appalachia was preparing its 2015 People's Pastoral, it got wind of another document coming from Rome, issued by Francis in June 2015 called "Laudato Si', On Care for Our Common Home."

In Laudato Si', Francis calls on the world to take "swift and unified global action" against climate change, environmental vandalism and rampant consumerism. The Catholic Committee of Appalachia delayed publication of its letter to coincide with Francis' encyclical but, Gomes noted, "they were doing what Francis was doing before there was Francis."

That same year a Franciscan friar, John Stowe, was appointed bishop of Lexington, Kentucky. When the People's Pastoral was published, he sent it to his fellow bishops across the United States, an endorsement the Catholic Committee of Appalachia never expected.

"It's always been hard for the institutional church to be prophetic," Stowe says in the film, "but I think because Francis speaks with such a prophetic voice it allows the other groups within the church who have been prophetic in their vision of things, and their way of listening to people the way CCA has done, they find a validation and an encouragement in that."

Moments like this are the closest "Magisterium of the People" gets to a fist-pumping moment. The film pulls you in with its deceptively gentle movement. It doesn't yell at the viewer, like so much of what passes for cultural commentary these days.

Gomes realizes not everyone is going to be a fellow traveler, but that's fine.

"When you invoke the term 'magisterium' and use it for anything other than episcopal or papal authority, there are serious questions that will be raised," he says, "but here you have a group of laypeople who said, 'We understand what the gospel is about — we've been doing this for a long time — and the poorest, weakest, marginalized people have authority and we're not going to wait around for the bishops to recognize it with us.' " 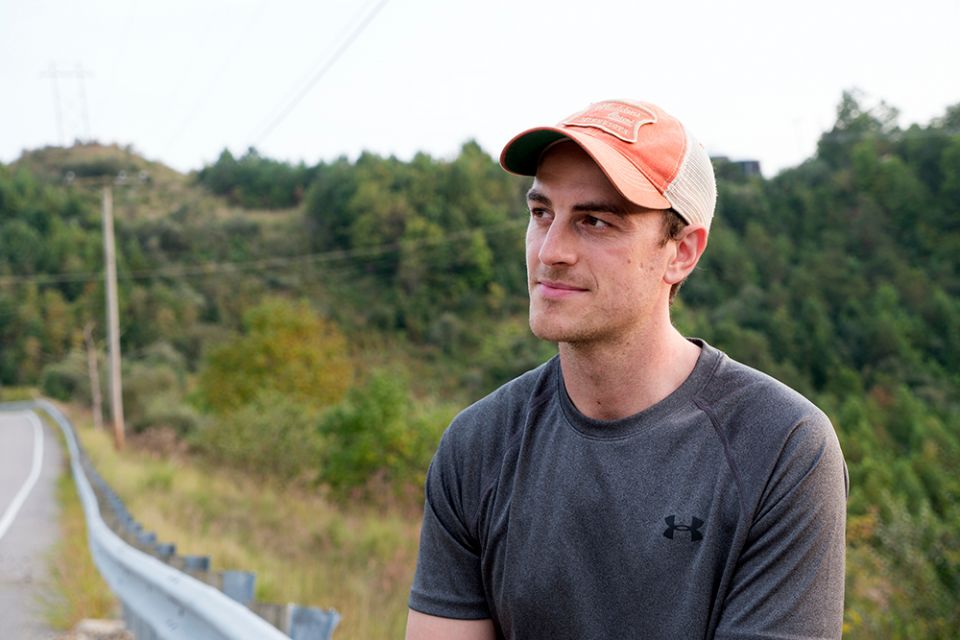 Filmmaker Sebastian Gomes works on his new documentary “Magesterium of the People.” (Photo courtesy of Salt and Light)