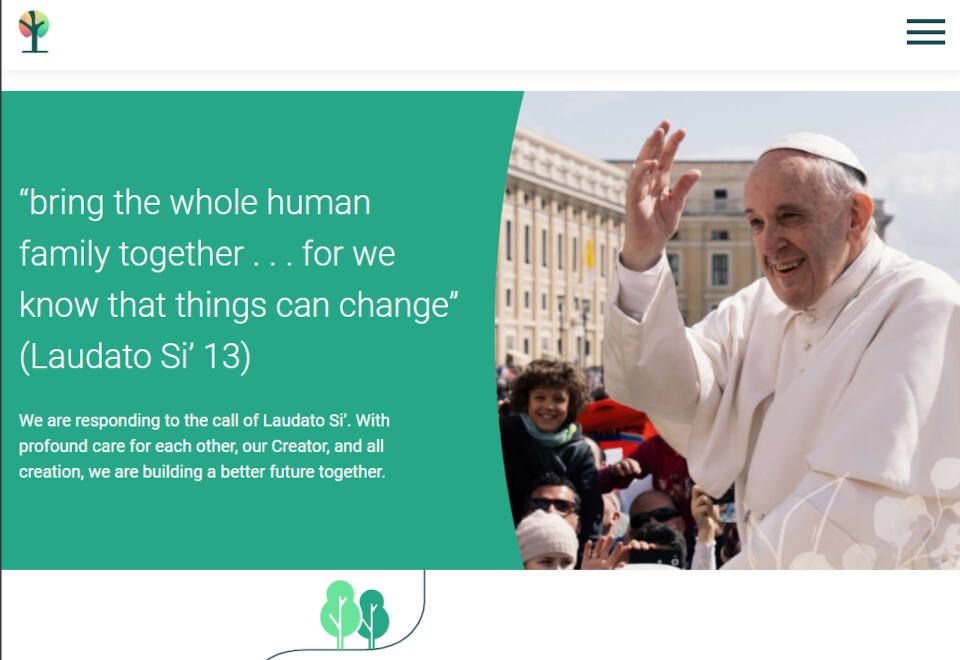 The Vatican's long-awaited program for putting Pope Francis' ecological encyclical into action throughout the church debuted Tuesday, with the pope inviting all Catholics on a journey "to create the future we want: a more inclusive, fraternal, peaceful and sustainable world."

At the same time, a top Vatican official confirmed that the pope is pondering a journey of his own — a possible trip to COP 26, the next major United Nations climate summit, set for November in Glasgow, Scotland.

That news came at a May 25 press conference where the Vatican Dicastery for Promoting Integral Human Development introduced the Laudato Si' Action Platform. The ambitious churchwide initiative outlines seven categories of sustainability goals in the spirit of Francis' 2015 encyclical, "Laudato Si', on Care for Our Common Home," which emphasizes integral ecology. Seven sectors of the church are asked to achieve those goals within a seven-year timeframe.

The platform includes goals for families, parishes and dioceses, schools and universities, businesses and farms, religious congregations, and hospitals and other health care facilities.

The action platform was first previewed in May 2020, at the start of the Laudato Si' Anniversary Year that the Vatican declared to raise attention and ambition around the encyclical. The end of that year marks the beginning of the next phase of implementing Laudato Si'.

Working groups for each sector have been meeting throughout the year to create benchmarks specific to their institutions and compile resources, toolkits and templates to guide groups on their own journeys to total sustainability as outlined in the encyclical.

A full rollout is planned at the conclusion of the annual Season of Creation, on Oct. 4, the feast of St. Francis of Assisi.

Until then, church institutions can register to join the platform on its website, www.laudatosiactionplatform.org.

The site includes additional information about the action platform, the Laudato Si' goals, and stories of how Catholics are already taking action to protect creation. It eventually will house a library of resources to help communities during their own seven-year processes.

In a video message, Francis said the Earth "has suffered from wounds that we cause due to a predatory attitude" and irresponsible use of natural resources. "These wounds manifest themselves dramatically in an unprecedented ecological crisis," and have been further highlighted by the coronavirus pandemic. 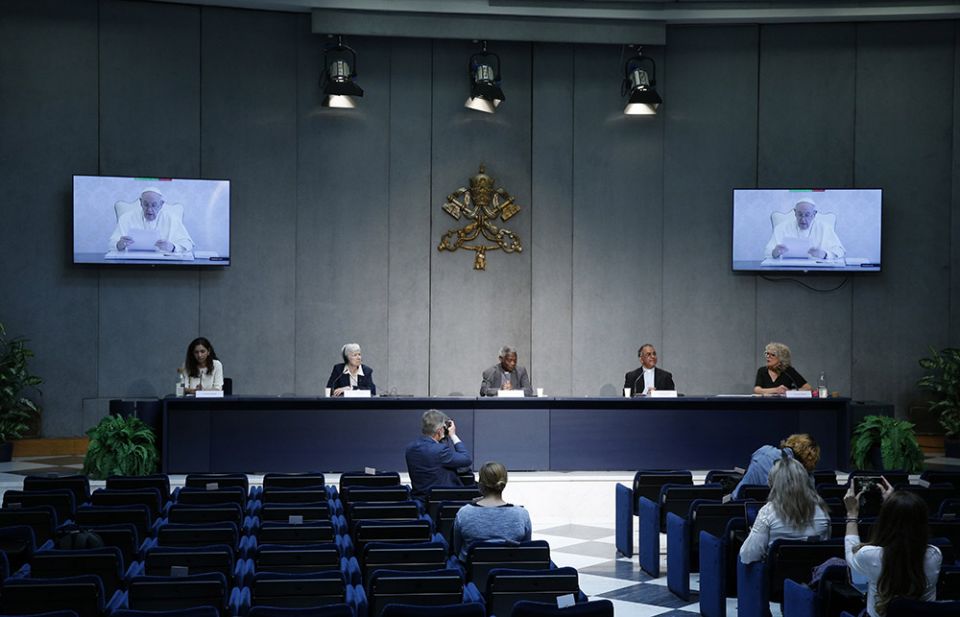 Pope Francis delivers a recorded video message during a news conference to unveil a new platform for action based on his 2015 encyclical, Laudato Si', at the Vatican May 25. (CNS/Paul Haring)

"We therefore need a new ecological approach, which transforms our way of living in the world, our lifestyles, our relationship with the Earth's resources and, in general, the way we understand people and the way they live their lives," Francis said.

"I would therefore like to invite everyone to undertake this journey together," he said, referring to the action platform and adding that only by working together "will we be able to create the future we want: a more inclusive, fraternal, peaceful and sustainable world."

"Now more than ever, it's time to act, to do something concrete," said Cardinal Peter Turkson, prefect of the Dicastery for Promoting Integral Human Development, which led the formation of the action platform.

Work on the Laudato Si' Action Platform began three years ago, sparked in part by a major report by the U.N.'s climate science body, the Intergovernmental Panel on Climate Change, which outlined the disasters that hundreds of millions of people could suffer if the world warms beyond 1.5 degrees Celsius. The report said carbon dioxide emissions must be cut nearly in half by 2030 to have a chance of meeting that target.

Since it was issued six years ago, Laudato Si' has been about action. Francis timed its release, in June 2015, to influence international negotiations months later at COP 21, the U.N. climate conference that produced the Paris Agreement and included the 1.5-degree target.

In mid-May, speculation that Francis might attend the Glasgow summit grew after John Kerry, the U.S. special envoy on climate, met with the pope at the Vatican and was later overheard on a video telling his staff he believed Francis would attend — an act the former secretary of state said "will have a profound impact."

At the May 25 press conference, Turkson said he could not confirm that Francis would join a Vatican delegation at COP 26, but that "the request has been made and addressed to him." He added there have been discussions of Francis and Ecumenical Patriarch Bartholomew, the spiritual leader of Eastern Orthodox Christians known as the "Green Patriarch," attending the climate summit together.

"We are hoping and we are keeping our fingers crossed," Turkson said.

While popes have regularly sent messages to the U.N. climate summits, none has ever attended in person. This year's meeting will be the first in two years, because of the coronavirus pandemic, and it is seen as critical, as nations are to present their new pledges aimed at meeting the Paris Agreement emissions-reduction target.

At the May 25 press conference, Nigel Topping, a high-level climate official for the United Kingdom, which is hosting COP 26, said church leadership on climate "has been fundamental" to progress made so far.

He applauded the Laudato Si' Action Platform, which he said "is about much more than building a zero-carbon economy. It's also about building a fairer, healthier and more resilient economy where we transition away from a singular focus on profit and growth at all costs to a society and an economy where people and planet thrive."

Topping said the platform aligns with top U.N.-led initiatives, particularly the Race to Zero, aimed at eliminating carbon emissions by midcentury, and the Race to Resilience, designed to prepare vulnerable communities for the impacts of climate change, some of which are already occurring.

Those campaigns, he said, "will enable us to tell a powerful story to governments about the whole of society's desire for the very highest level of ambition and action on climate change."

Organizers of the Laudato Si' Action Platform also hope it will spur greater ambition among the world's 1.2 billion Catholics and tens of thousands of church institutions to respond to the encyclical's message of living in ways that better preserve nature and communities.

Creators of the action platform would like to see the number of participating institutions double each year. Salesian Fr. Joshtrom Kureethadam, head of the dicastery's ecology and creation sector, said sociologists believe it takes just 3.5% of a group to reach the critical mass necessary to create lasting change.

"That's what Mahatma Gandhi did, that's what Nelson Mandela did, and we hope under the leadership of Pope Francis, within a few years in this critical decade, we can reach the critical mass," he said. 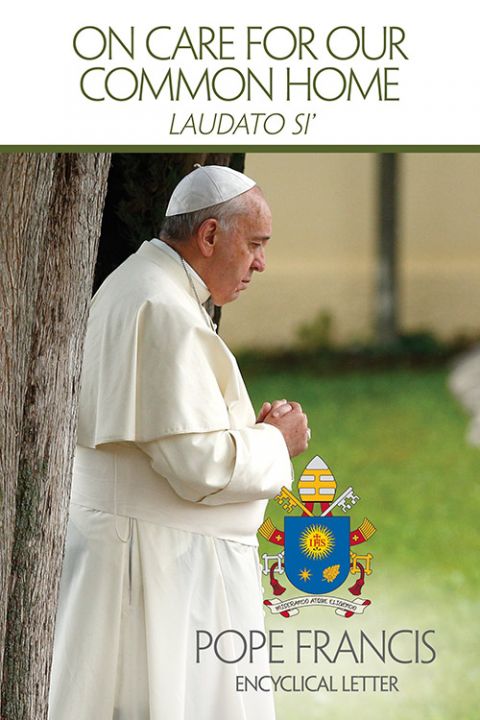 The cover of the English edition of Pope Francis' encyclical on the environment, "Laudato Si', on Care for Our Common Home" (CNS/Courtesy of U.S. Conference of Catholic Bishops)

A number of the church's largest and most visible organizations are involved in working groups that are adapting the action platform goals for the various church sectors. They include Caritas Internationalis; bishops’ conferences; the major umbrella groups of women and men religious; regional ecclesial networks in the Amazon Basin, Central America, Africa, and Asia and Oceania; and other institutions like CIDSE, Catholic Health Association USA and the Global Catholic Climate Movement.

Franciscan Sr. Sheila Kinsey, executive co-secretary of the International Union of Superiors General’s Justice, Peace and Integrity of Creation Commission, said its Sowing Hope for the Planet campaign laid the foundation for efforts aimed at religious congregations. Each congregation is encouraged to first make a commitment to Laudato Si' — "one that is prophetic, public and accountable" — based on its charism. The working group is developing suggested benchmarks for each of the Laudato Si' platform goals.

Likewise, the working group on universities has been gathering materials and examples from campuses worldwide that others can use in their efforts to implement Laudato Si'. Matthew Worsham, energy efficiency and renewable energy manager at the University of Dayton, Ohio, and a member of that working group, told EarthBeat that the platform could make "a substantial impact," especially in the area of energy. He hopes it will prompt more Catholic organizations to closely examine their energy use, and to install the "low-hanging fruit" of cost-saving efficiency upgrades.

"There's a huge footprint that the church has," Worsham said.

During the press conference, Kureethadam outlined a road map for the seven-year process. The first year is dedicated to community building, resource sharing and developing plans to achieve the Laudato Si' goals. That is followed by five years of concrete actions to achieve the goals, and then a final sabbatical year "to praise and thank God."

Carolina Bianchi, a youth member of the Global Catholic Climate Movement, said the action platform will help Laudato Si' animators like her, who sometimes aren't sure what different groups can do. She called it a sign that the church "is making progress in building the better future that Laudato Si' calls us to build."

"People all over the world are looking for hope,” she said “and the Laudato Si’ Platform for Action provides real hope.”

Read this next: Five years ago, Pope Francis asked us to care for Earth. Have we listened?
A version of this story appeared in the June 11-24, 2021 print issue under the headline: Vatican launches program to put Laudato Si' into action .