Climate summit postponed, but action should ramp up, say advocates 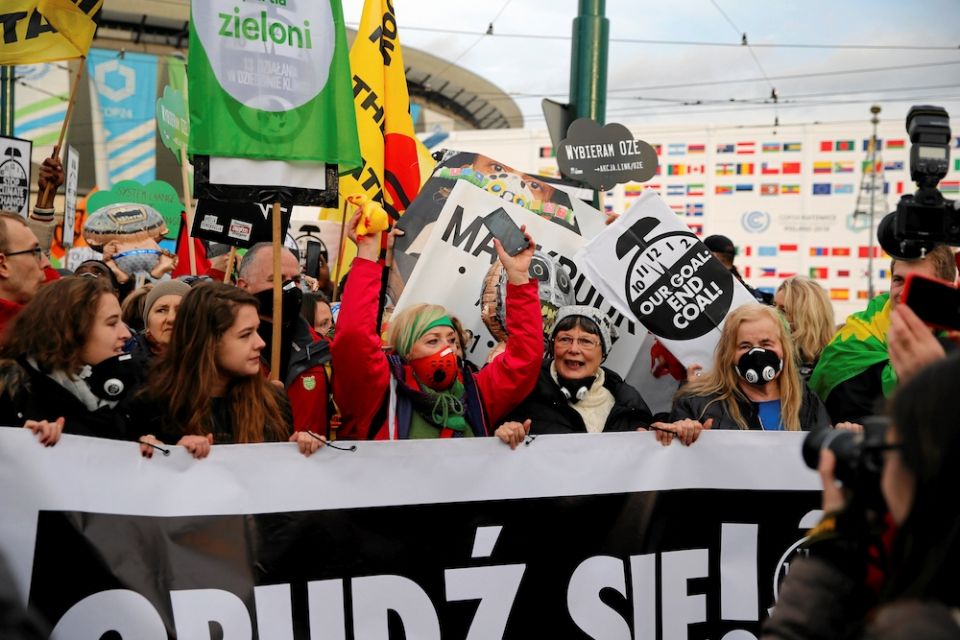 Protesters march outside the venue of the U.N. climate change conference, or COP24, Dec. 8, 2018, in Katowice, Poland. (CNS/Reuters/Kacper Pempel)

Before the novel coronavirus pandemic erupted early this year, a key United Nations climate summit — marking the fifth anniversary of the signing of the Paris Agreement on reducing greenhouse gas emissions — was scheduled to begin this week in Glasgow, Scotland. Although various interim meetings have been held virtually, the summit itself was postponed until November 2021.

That has created a sort of "gap year" for the 197 countries that have signed onto the Paris Agreement. The United States officially withdrew from the pact as of Nov. 4, though President-elect Joe Biden has pledged to rejoin once he is inaugurated in January.

Experts say countries should use this year to step up their efforts to reduce greenhouse gas emissions to hold the global temperature increase to no more than 1.5 degrees Celsius. And although the COVID-19 pandemic has thrown the global economy into disarray, it also creates an opportunity for countries to set a course for a greener future as they plan their economic recovery.

The pandemic "puts down a bit of a gauntlet to us," Cliona Sharkey, advocacy director for the Global Catholic Climate Movement, told EarthBeat. "Are we going to change our ways, or are we not? The idea that we can fix climate change by tweaking or improving what we currently have is not realistic."

Citing Pope Francis, who has linked the COVID-19 crisis and the climate crisis, Sharkey added, "If we are to meet the interconnected crises we're facing, we need a regenerative economy, a regenerative recovery."

The year leading up to the rescheduled climate summit — known as the 26th conference of parties to the U.N. Framework Convention on Climate Change, or COP26 — gives countries a chance to take more and stronger steps toward that goal.

"This is up to us, with this additional period of time before the COP 26," Sharkey said. "That is the key question: Will we emerge worse or will we emerge better from this crisis? Will we align the COVID response packages with increased ambitious action on climate change?"

During this "gap year," countries must not only take steps to reduce their greenhouse gas emissions, she added, but also focus on helping lower-income countries adapt to the impacts of climate change and guarantee the financial assistance to make that possible.

The urgency of the climate crisis is becoming more and more apparent. Recent weather extremes — including drought in some parts of Africa and flooding in others, Typhoon Goni that lashed the Philippines and deadly Hurricane Eta and other severe storms in Central America and the southern U.S. — have underscored the urgency of more ambitious targets. 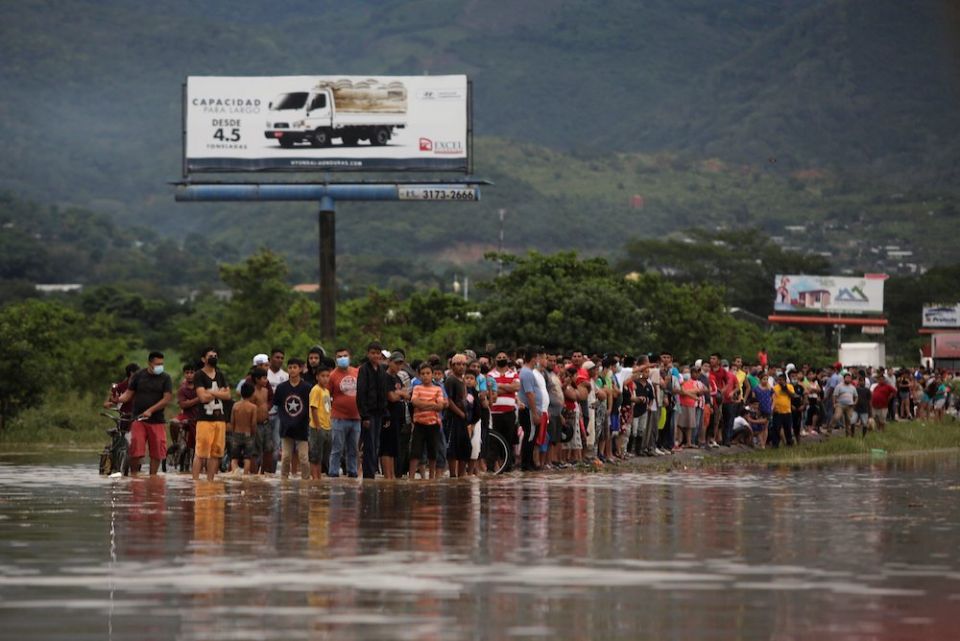 "We're feeling the effects [of global warming], and things seemed to be on a much faster pace than what scientists were predicting," said Lori Pearson, senior technical and policy adviser for food security and climate change at Catholic Relief Services.

Countries should spend this year increasing what climate negotiators call their "ambition" — the amount by which they commit to reducing emissions —"to really get to the 1.5 degree [limit] and get there more quickly," Pearson said.

"We need mechanisms in place to help the developing world to move forward on their ambitions," she added. "And then the action, to make that happen."

In a statement Nov. 9, U.N. Secretary General Antonio Guterres warned that with the commitments made so far — known as nationally determined contributions, or NDCs — the global temperature, which has already risen by an average of 1 C since the Industrial Revolution, could increase by another two degrees by the end of the century. Roughly one-tenth of the planet has already surpassed 2 C of warming, according to an analysis by The Washington Post.

According to a 2018 report from the world's top climate scientists, holding the increase to no more than 1.5 C by the end of this century would require achieving net-zero emissions — meaning that all new emissions generated by human activities are removed from the atmosphere — by the middle of this century.

"That means, actually, in the next 10 years, all emissions must have at least halved," Lydia Machaka, climate justice and energy officer for CIDSE, an international group of Catholic social justice organizations, told EarthBeat.

The European Union, Japan and South Korea are among the countries that have pledged to reach net-zero emissions by 2050. China has said it would do the same before 2060. But to ensure that they attain that goal, they must set more stringent targets for this decade.

Machaka sees possibilities for progress as countries plan their recovery from the economic crisis caused by the COVID-19 pandemic.

"COVID actually represents a new chance, because things have slowed down," she said. "There are opportunities, when we restart, to restart in a greener way."

David Waskow, director of the international climate initiative at the Washington-based non-profit World Resources Institute, sees possibilities on various fronts, including renewable energy, which is "galloping ahead in many places," and electrification of vehicles.

The European Union has already outlined a carbon-reducing European Green Deal, which focuses on creating a clean, circular economy, reducing pollution and restoring biodiversity, as well as providing financial and technical assistance to other countries.

In the U.S., the Trump administration's increased emphasis on fossil fuels and withdrawal from the Paris Agreement put the U.S., historically the world's largest emitter of greenhouse gases, out of step with other wealthy countries.

Biden, however, has already signaled that he will make the climate crisis a priority, returning the country to the Paris Agreement once he is inaugurated and implementing a recovery plan that calls for a job-creating clean-energy economy resulting in net-zero emissions by 2050.

The task will be more difficult for lower- and middle-income countries, Waskow said. They will need more assistance, including debt relief, if they are to green their economies as they recover.

Before the pandemic, the economic growth of many middle-income countries meant their emissions were rising at a faster pace than those of wealthier nations. Nevertheless, those countries still represent a small percentage of emissions, compared to giants like the U.S., China and India.

And industrialized countries have an obligation — an "ecological debt," as Francis has called it — to help those countries meet the Paris Agreement goals, Sharkey said.

"Equity is fundamental," she said. "We're all in the same storm, but we're not in the same boat, and all boats were not made equal." 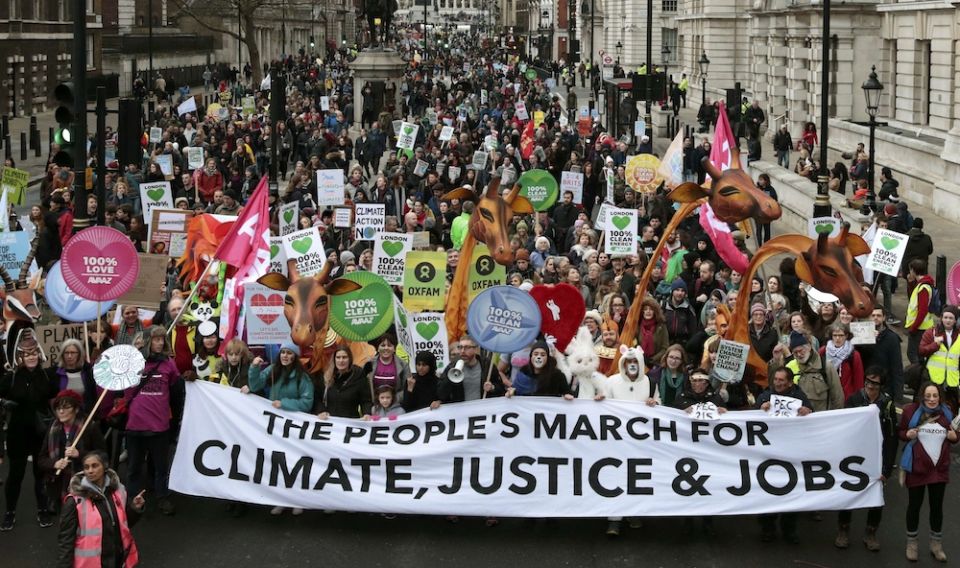 Protesters demonstrate during a rally in London Nov. 29, 2015, ahead of the U.N. climate change conference, known as the COP21 summit, in Paris. (CNS/Reuters/Suzanne Plunkett)

Under the Paris Agreement, wealthier countries pledged to aid lower-income nations with contributions to the Green Climate Fund. The total was to reach $100 billion a year by this year, but has fallen far short, especially after Trump reneged on $2 billion of the $3 billion U.S. pledge.

Many of the pledges were not additional contributions but funds that wealthier nations would have provided anyway as development aid, Sharkey said. Others were loans, rather than grants, which increased lower-income nations' debt burdens.

Of the $54.5 billion in public climate funding from wealthier nations for lower-income countries between 2013 and 2017, about $40 billion was in loans, and less than $13 billion was in outright grants, according to an October 2020 report by the Green Climate Fund.

Financing is critical to help lower-income countries gain access to technology, such as solar or wind energy, that has high start up costs, but which will result in savings over the long term, Waskow said. It is also crucial for helping lower-income countries deal with the impacts they are already experiencing.

"All over the world, people [are] experiencing still climate disaster, " Machaka said. "Very often we have seen countries talking about cutting the emissions gap, but forgetting about adaptation."

Although that takes different forms in different places, depending on the impacts, two critical areas around the globe are food and water, especially as rising temperatures and droughts threaten crop production and water supplies, Waskow said.

Adaptation requires not only assistance to farmers, to help them adjust to changing conditions, but also information systems for forecasting and tracking the effects of those impacts as they ripple from rural areas to cities, he said. 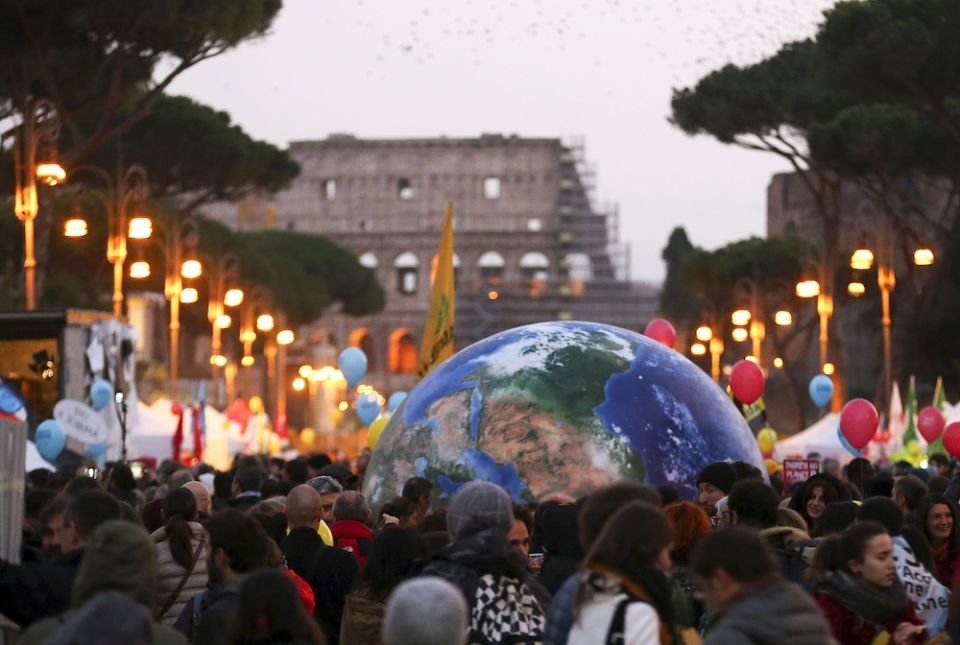 Protesters carry a globe-shaped balloon in front of Rome's Colosseum during a Nov. 29, 2015, rally, the day before the start of the U.N. climate change conference in Paris. (CNS/Reuters/Alessandro Bianchi)

Although the U.N. climate summits focus mainly on actions by countries and financers, individuals and communities play a key role in addressing the climate crisis, Sharkey said.

Households, communities and parishes can also take action in areas like reducing emissions, increasing energy efficiency, cutting waste and conserving water, she said. In the U.S., dioceses and parishes are conducting energy audits, switching to solar power and working to reduce waste.

"But as an advocate, something that I always say when people ask me this question is [that] the most important thing you can do is raise your voice," to insist that politicians at the local, regional and national levels "act in line with the best science," Sharkey said. "What a great thing it will be if, with this gap year, we see a huge upswing and have people calling from the local to the national levels for more action."

Ultimately, says Machaka, the CIDSE climate justice officer, stopping the perilous increase in global temperatures and helping countries withstand the effects, from flooding and drought to sea-level rise, is a task for all.

"Climate change is something that should not be politicized," she said. "It's about preserving life on this planet. And this is what should be driving our action, not politics."

In his new encyclical, Fratteli Tutti, Francis "is calling not to focus on what divides us, but to really focus on the common good, which is having a healthy planet and enjoying all the gifts, having access to all human rights," Machaka added. "We will continue the struggle, our common struggle, for a just and equitable climate future. And we will continue taking action to ensure that those who suffer from climate impact get their voices heard."