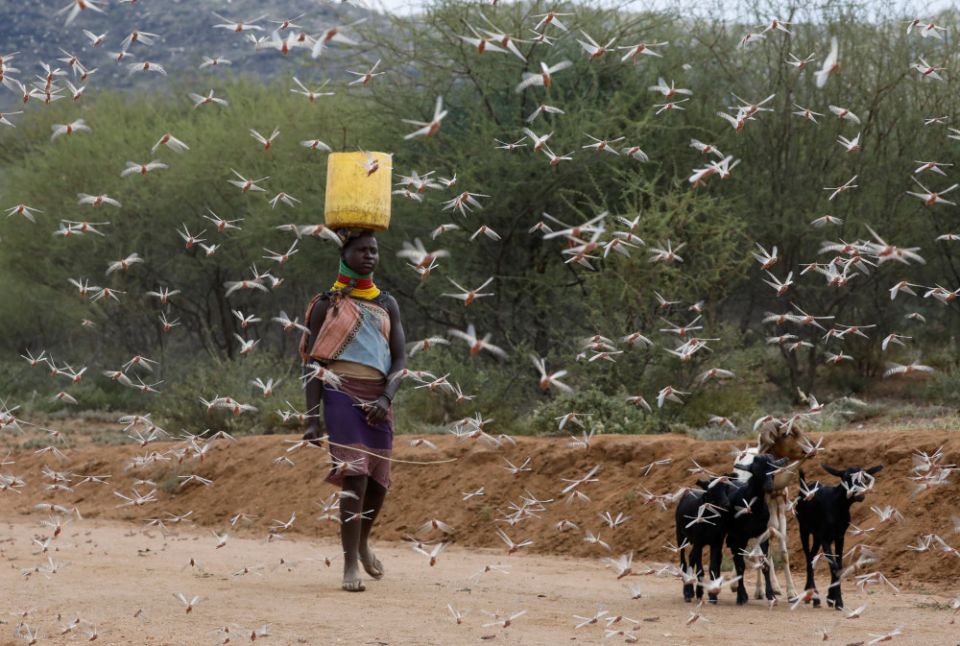 A woman from the Turkana tribe walks through a swarm of desert locusts in early July in the village of Lorengippi, Kenya. Predictions of a return of desert locusts in East Africa are triggering concerns among Catholic Church leaders and experts in the region, where communities are still recovering from the destruction by the first wave. (CNS photo/Reuters/Baz Ratner)

NAIROBI, Kenya — A predicted return of desert locusts in East Africa is triggering concerns among Catholic leaders and experts in the region, where communities are still recovering from the destruction by the first wave early this year.

The concerns follow a U.N. Food and Agricultural Organization warning that a new wave is imminent. The agency cited increasing breeding in the Middle East and the Horn of Africa and the movement of the winds across the Red Sea into East Africa.

"This is a major cause of concern. The message needs to reach the concerned authorities. We need to prepare the people before the insects return," Msgr. Isaac Ibrahim Racho, vicar general of the Diocese of Marsabit, told Catholic News Service. His diocese is one of the Kenyan regions where the locusts destroyed crops and animal pastures.

In Maseki, a remote village in Kitui County, where the insects devoured crops and destroyed pasture in the last wave, the residents greeted the prediction with apprehension.

"People are still dependent on relief food," said Perpetua Kavinya, a resident of the village who lost all her crop to the locusts.

"I cannot imagine those insects returning. We are preparing our farms for planting, and I think quick action is needed to stop any infestation," added Kavinya.

At stake are the food security and livelihoods of millions in the region, according to clerics and agency officials. In May, the World Food Program said 20 million people in Ethiopia, Somalia, South Sudan, Sudan, Kenya, Uganda, Rwanda, Burundi, Djibouti and Eritrea were facing acute food shortage. The situation was blamed partly on the locusts and environmental disasters, including flood and droughts.

"If we cannot control the infestation on time, there will be serious damage to crops. If the people lose their crops, families that depend on agriculture could experience a lack of food in the future," said Zemede Zewdie, head of programs for the U.S. bishops' Catholic Relief Services in Ethiopia.

Experts say the rise of locusts in Africa and the Middle East is linked to rapidly warming waters of the Indian Ocean due to a climatic condition called the Indian Ocean Dipole, or Indian Niño. The phenomenon — amplified by global warming — has led to heavy rainfall and warmer temperatures, favorable conditions for breeding locusts. 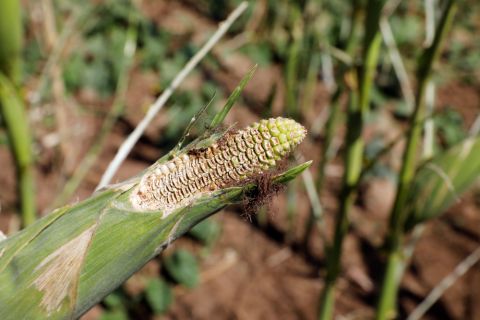 An ear of corn eaten by desert locust is pictured in late June in a field near Lodwar, Kenya. (CNS photo/Reuters/Baz Ratner)

The insects are voracious eaters, with one consuming its own weight — about 2 grams — every day. A swarm that is a square kilometer in size eats the same amount of food as 35,000 people in a day. The insects feed on foliage, and once they devour a region, they move to the next, thus they can cover more than 90 miles in a day.

According to the FAO, bands and swarms continue to form in Yemen, substantial hatching is also occurring in northeast Ethiopia, and the numbers and swarms are increasing in Somalia.

"As prevailing winds coming from the north become established over the Horn of Africa, there will be increased threat of swarm migration from Yemen, northeast Ethiopia and northern Somalia, south to eastern Ethiopia and central Somalia in October that could extend to northern Kenya in November," the FAO warned in a locust situation update Oct. 5.

The swarms could increase 20-fold until next April, said David Owino, the partner project manager in the Kenya office of Malteser International, the relief agency of the Order of Malta.

"We are very concerned about this projection in the wake of expected below-average rainfall projection" for October to December, said Owino, whose organization is helping 1,000 households Marsabit County buy food for families and livestock, following the locust surge earlier this year.

When the first wave landed in East Africa in December and early 2020 after flying over the Red Sea, the insects devoured farmlands and pasture in Ethiopia, Kenya and Somalia in months.

Some countries — including Kenya and Ethiopia — are still battling the insect, following the hatching of eggs laid in the last wave.

Zewdie said CRS had seen serious damage to crops such as sorghum and to grazing lands. He mentioned one desert locust infestation in Ethiopia and said CRS was working with its local partner, Hararghe Catholic Secretariat, to control the insects through spraying.