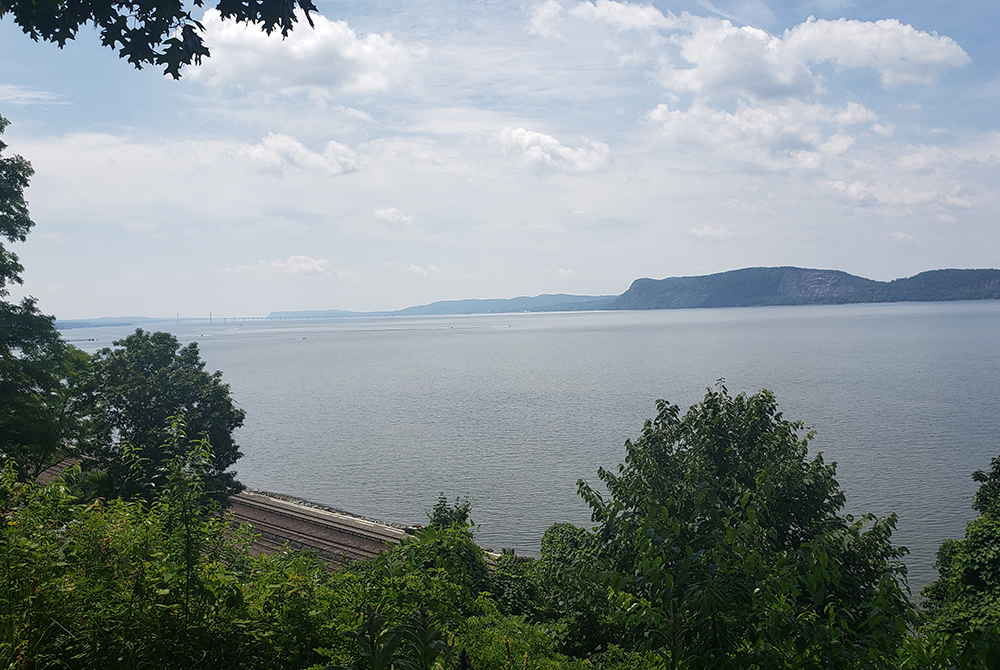 by Chris Herlinger
Action
This article appears in the An Estate Plan for the Earth feature series. View the full series.

Editor's note: This is the fourth part of EarthBeat's special series "An Estate Plan for the Earth," about how women's religious communities are conserving their land for future generations. You can read previous entries here.

Fall has arrived in the Hudson River Valley, a particularly beautiful time for a locale of forests, estuaries, marshlands, parks, hiking trails, bridges — and the mighty expanse of the Hudson River.

Protecting the ecological integrity of this land has been a mission for religious congregations with ties to the valley since the founding in 1996 of Religious Organizations Along the River, or ROAR.

The coalition has been active in education and advocacy on several key issues in the last 25 years, including fracking, the closure of the Indian Point nuclear power plant and, more recently, a proposed electric line under the Hudson River that would connect electricity providers in Canada with the New York metropolitan area.

"ROAR helps us as a group to think collectively as a faith-based voice in terms of our relationship to the Hudson River and its bioregion," said Sr. Carol De Angelo, director of the Office of Peace, Justice and Integrity of Creation for the Sisters of Charity of New York, one of the original congregational members of ROAR.

It also puts the river, and creation, at the center of the group's vision and activism. "We get to see Indian Point from the perspective of the river," rather than from economic interests that may do damage to the valley, De Angelo said. "We've been blessed to really have that kind of understanding."

The group maintains ties with international organizations, such as the global Laudato Si' Movement, as well as secular grassroots activists in the Hudson Valley.

Cornell believes ROAR's biggest accomplishment has been the decision by several congregations to preserve parts of their land through conservation easements, which protect land against future development even if it changes hands eventually. Some of the easements are on property along or near the Hudson River, which would be prime real estate for developers.

"That's huge," Marilyn Elie, a longtime local environmental activist, said of the easements. Without such protection, she added, development of those properties would have a lasting impact on Hudson Valley ecosystems.

The ROAR members have supported one another in that process, said Maryknoll Sr. Doreen Longres, whose community in Ossining, New York, was one of the first to create an easement. In making their decision, the sisters drew on the practical advice provided in a land-use handbook printed by ROAR in 2008.

Doreen Longres discusses the path to a conservation easement

Sr. Doreen Longres speaks with EarthBeat about the Maryknoll Sisters' decision and journey to preserve parts of their land through a conservation easement. "The easement didn't come easy," she says. (EarthBeat video/Chris Herlinger)

The move in 2012 to conserve 42 of 67 acres in an agreement with the Westchester Land Trust made the Maryknoll Sisters pioneers of a sort — other congregations in the Hudson Valley region have since followed suit.

Longres and others involved in the process say the decision about land use was made deliberately, prayerfully and without internal disagreement.

The decision was part of a larger series of decisions about how to align practical environmental matters — such as those related to the physical plant and food service — with the sisters' growing commitment to protecting the Earth, which was rooted in the work of early ecotheologians and the sisters' own missionary experience among Indigenous peoples.

Those experiences made it clear that "ecology, and that's how we talked about it then, is a mission imperative [and] ecological issues should be incorporated into everything we do," Longres told EarthBeat.

"And so we said, 'What does that mean?' It means we work towards just relationships not only with humankind, but with all nature, that we recognize our interconnectedness," she added. "The crisis is such that it is dangerous enough to destroy the whole Earth, and that's what we recognized."

The area designated for the easement was chosen because of its ecological value.

"We recognized that a large part of our property pertained to a wetland area," Longres said. Although local laws protect wetlands, "these laws can be changed. So we felt by putting some of that forested area [into an easement], we would protect the wetland area from ever being dredged and destroyed and developed."

Besides that, she said, "It has a witness value. We think is important to protect this in perpetuity."

That witness value bore fruit not far away, on a forested bluff overseeing the Hudson River. On a summer day earlier this year, Dominican Sr. Bette Ann Jaster walked that bluff, pointing out an old tree here, a quarter-acre garden there, and a labyrinth that visitors use for contemplation and meditation.

In September 2018, her congregation, the Dominican Sisters of Hope, and the Westchester Land Trust announced an agreement that protects 34 acres of the sisters' 61-acre property, called Mariandale, in perpetuity.

"When we're in the garden, it's like we're in heaven," Jaster said.

Sr. Bette Ann Jaster talks about the ecological and spiritual value of the Dominican Sisters' land, and the importance of protecting the land in perpetuity. (EarthBeat video/Chris Herlinger)

The decision by Dominican Sisters of Hope — a congregation formed in 1995 from three Dominican communities based in Fall River, Massachusetts; Newburgh, New York; and Ossining, New York — to protect the land reflects the group's mission statement, Jaster said: "We're called to preach the Gospel to our world in communion with all creation. We commit our lives to the transforming power of hope."

Visitors — whether they be children from New York City in the summer or those seeking retreat space — have always played an important part in the life of Mariandale, which includes a conference and retreat center.

So when the sisters realized that their numbers were declining, they embarked on a process that led to the decision to preserve the land.

"When we started talking, we were getting smaller as a community and we wanted to preserve it to make sure that it will always be there for people," Jaster recalled.

They especially did not want to see the land go to developers or be turned into a parking lot.

So the sisters formed a land committee and researched options, finally settling on an agreement with the land trust to preserve the land for visitors and, ultimately, for all of creation.

Jaster's recommendations to congregations contemplating similar efforts? Study the options. Reach consensus. And don't be afraid to dream big. "That's why I say whatever you do or dream, you can. Begin it. Boldness has genius, power and magic in it."

A gift to the planet

Across the Hudson, in Upper Nyack, the Sisters of Our Lady of Christian Doctrine have long shared that commitment to caring for the land, the river and the creatures living there.

Strolling across an expanse of grassy, undeveloped land at the foot of the imposing Hook Mountain, Sr. Verónica Méndez pointed to the river in the distance.

"The view from our hill is just splendid," she said.

It is a view that she and other members of her community wanted to be unencumbered by development — and especially to be saved from becoming a parking lot.

Not a future parking lot: Verónica Méndez on keeping the land green

Sr. Verónica Méndez of the Sisters of Our Lady of Christian Doctrine talks about protecting their property, gifting the people with the land, and making sure it doesn't turn into a parking lot. (EarthBeat video/Chris Herlinger)

For Méndez and other members of the congregation, protecting a bit of creation in its natural state is both a Christian responsibility and part of their heritage.

The congregation's Marydell Faith and Life Center, located about 30 miles north of New York City, sits on 10 acres of land that served for 60 years as a summer camp for children from New York City. The camp was an extension of the ministry of the congregation's foundress, Marion Gurney, who ministered in New York City in the early 1900s as immigrants poured into the teeming city.

After 1988, aging members of the congregation closed the camp, feeling they didn't have the energy needed to run it. The site reopened in 1990 as the Marydell Faith and Life Center, with cabins, meeting space, a swimming pool and the congregation's convent. Groups of all kinds and faith traditions come to the center for meetings and retreats.

"As the years went by, the Lord did not grace us with vocations," Méndez said. "So we knew that down the line, we were going to have to do something" with 30 additional acres the congregation had acquired.

The sisters were adamant that the land not be developed and found allies among their neighbors.

Eventually the Trust for Public Land, working with state and local government agencies, purchased the 30 acres for $3.1 million and turned it over to the state, to be added to neighboring parkland.

The sisters created a trust fund and kept 10 acres for continued use of Marydell. If the center should be closed in the future, the congregation has requested that the buildings be torn down and the land added to the protected area. One stipulation: it must never be turned into a parking lot for the park.

"This property has been pure gift to us for the almost 100 years we have been here," Méndez said. "Now, as we approach the completion of our community, it is time for us to gift it back — gift it to this neighborhood, to the many who come to enjoy Nyack State Park and, ultimately, gift it to the planet."

Though the land and conservation easements are the work of individual congregations, they are part of a greater whole, with ROAR serving as an umbrella.

"While each of our congregations are doing things individually, the collective voice of ROAR is also a strong voice," De Angelo said. "That's where it contributes to the larger whole. We're just one little drop in the ocean, but I think that the faith voice needs to be made."

De Angelo recalls marching with other sisters and Catholics in climate-related events, such as environmental-themed marches in New York City.

Non-Catholics, or one-time Catholics, were surprised by their presence.

" 'Oh, the Catholic Church is involved in this? Oh, Catholics are interested in this? Oh, I didn't know there are groups like this!' " De Angelo recalled people saying. "So it is a witness. It is a witness that people of faith, especially Catholics, care about the integrity of creation."

Environment | By protecting land, sisters leave a legacy and 'gift it to the planet'