Tracking energy use in the Chicago Archdiocese, one meter at a time 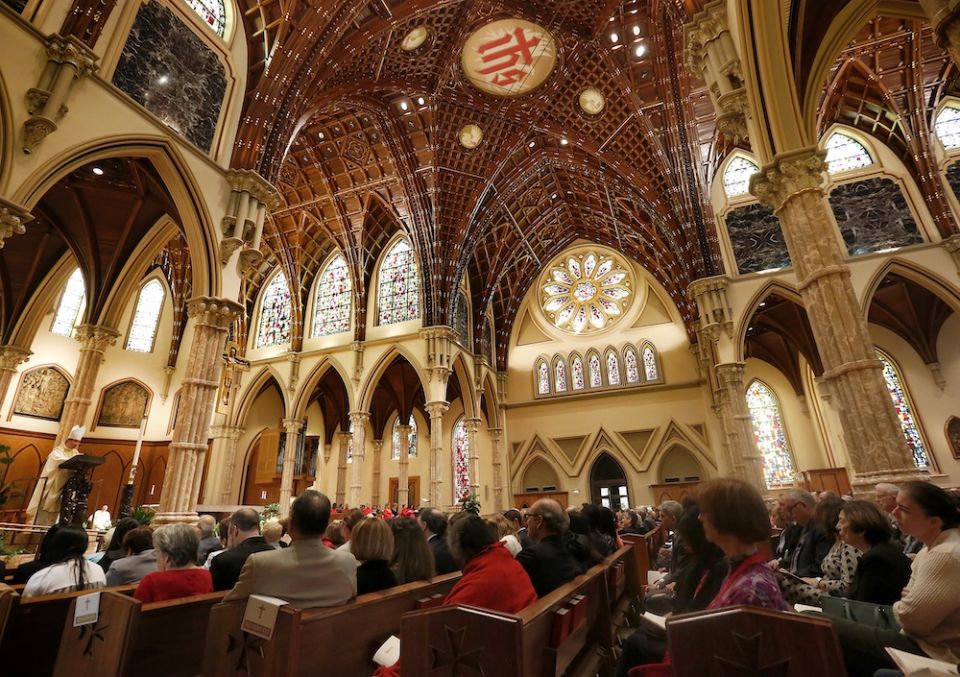 Holy Name Cathedral, seen here in this May 2017 photo, was one of 18 properties owned by the Chicago Archdiocese required by a city ordinance to benchmark, or track, its energy use. (CNS/Chicago Catholic/Karen Callaway)

In summer 2015, the Chicago Archdiocese announced an ambitious goal: It would benchmark the energy use of all 2,700 buildings and properties under its purview.

The announcement came a month after Pope Francis issued his social encyclical "Laudato Si', on Care for Our Common Home." At the time, Gina McCarthy, then administrator of the U.S. Environmental Protection Agency, joined Cardinal Blase Cupich on a tour of Old St. Mary's School, located on Michigan Avenue, to mark the major commitment.

The effort, McCarthy said, was "answering the pope's call."

Benchmarking refers to measuring a building's energy use over time and in comparison to other properties of similar size and location, and then using that information to assess performance, identify improvements and quantify potential and real savings. In the Chicago Archdiocese, the task of benchmarking all properties in a way that would yield the most useful information proved more complex than anticipated.

"When I looked at it, it was a lot to take on," said David Singler, an energy and sustainability associate in the archdiocese's real estate department, who arrived a year after the announcement and with the benchmarking initiative already under way. "And what I realized is that our portfolio is very complicated."

After the benchmarking announcement, the archdiocese worked with teams of volunteers to set up each parish with accounts through EPA's Energy Star Portfolio Manager, a free online program that allows an organization to upload its energy data and track it over time. The massive data dump the archdiocese fed into the EPA software gave a general sense of the energy usage at each parish or school, but didn't tell the full story. To do that, Singler suggested, they would need to go even lower, to the individual building level.

"In my mind, for benchmarking and trying to do efficiency work, ideally we want to know [and] understand what's going on at every building, not just at every parish," he said.

That would mean a more intensive energy investigation. It would also mean a reset of the process.

Can't manage what you don't measure

Energy management is not always the most eye-catching move, but it is essential. In many cases it's one of the most effective ways to reduce energy use, and with it monthly bill payments. Often, that begins with benchmarking.

Benchmarking provides two primary streams of information, said Aaron Durnbaugh, director of sustainability at Loyola University Chicago, which collaborated with the archdiocese on the project. The first is a comparison. The Portfolio Manager system allows a particular parish or school to compare its energy use against other buildings with similar square footage, building use and climate. The second is measuring change over time, to see if energy improvements or upgrades are yielding the expected efficiency and savings.

"I don't want to say it's energy management 101, because often it's not how folks manage energy — they manage energy with 'We fix it when it breaks' — but it should be," Durnbaugh said.

While other initiatives, like solar energy or planting trees, garner a lot of attention as solutions to limit climate change, Durnbaugh said that one of the most effective approaches is addressing local greenhouse gas emissions, which add to global emissions. And that invariably involves using energy more efficiently. Research by Loyola Chicago has found that as much as 60% of the greenhouse gas emissions in the Chicagoland region, and 70% within the city, come from powering its buildings.

"So much of it comes down to the energy we use in our buildings. And making our buildings much more energy efficient," he said.

Related: Chicago parishes look to do more with less through energy efficiency

Add to that the fact that utilities are one of the three major costs a typical parish or school faces, and the benefits from energy savings identified through benchmarking only grow.

On the surface, benchmarking seems straightforward. By tracking and recording how a building uses energy, and how much it uses, a business or organization can identify inefficiencies and pinpoint what upgrades would make the biggest impact. In the case of one Catholic cemetery, benchmarking helped identify high nighttime energy use, a result of running equipment that could have been turned off. After some adjustments, the energy bills began to lower.

"You can't manage what you're not measuring. And that's especially true for energy," Singler said. "So to properly manage it, you should be measuring what's going on."

Singler came to the archdiocese in the summer of 2016 through the Environmental Defense Fund's Climate Corps fellowship, which partners graduate students with companies and organizations to pursue more efficient and cleaner energy use. That fall, the archdiocese hired him full time as its energy and sustainability associate.

In his new position, Singler began to reevaluate benchmarking.

Rather than focusing on all 2,700 buildings, he turned his attention first to the highest priorities, which were also the archdiocese's biggest properties and energy users. In 2014, the city of Chicago passed an ordinance requiring buildings of 100,000 square feet and up to benchmark their energy use annually. A year later, it was extended to buildings above 50,000 square feet. The archdiocese had 18 such properties in its portfolio. They included the Archbishop Quigley Pastoral Center and Holy Name Cathedral, as well its two archdiocesan high schools and a number of parishes that also had large school buildings.

Singler partnered with Loyola Chicago, which had received a $10,000 award for its work on climate leadership that it sought to invest in community projects. Beginning in the fall of 2017, the money funded teams of interns who worked with Singler to get benchmarking in the archdiocese down to the building level.

Tracking the meters at each site turned the team into energy detectives. The first step was to physically locate them: Sometimes they were easily visible, but others were hidden behind bushes, in the backs of closets or in basement crawlspaces. 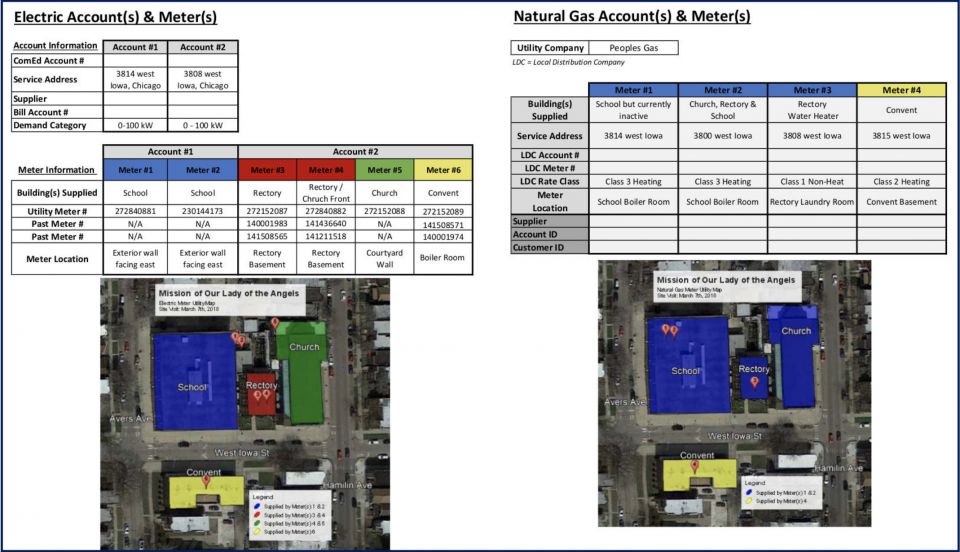 Utility maps of the campus of Mission of Our Lady of the Angels, in Chicago, identify where electricity and gas meters are located and which buildings they supply. Utility maps outline the information used to benchmark a building's energy use. (Chicago Archdiocese)

"We're going to places that had schools, or were schools. So as kids are playing at recess, we would all climb through some bushes and take pictures of the meter," said Rose Mohammadi, one of the interns.

"No one knows where the meter is," Singler added. "If I didn't have the bill, I wouldn't know that meter existed."

The second step was identifying which meters fed which buildings and were attached to which bills. A parish with four bills did not always equate to four separate meters feeding four buildings. In some cases, a boiler or stove in the parish hall had its own meter.

The interns photographed each meter and documented its location and type. That information was later used to build the maps. The information from utility mapping proved useful beyond understanding energy consumption. It also allowed the real estate department to ensure that occupants leasing archdiocesan buildings were paying their full electric and gas bills, and that part of their usage wasn't measured by another meter.

In the spring of 2019, Singler and a second team of Loyola Chicago interns completed utility maps for the remaining 18 priority sites and uploaded the information for all into Portfolio Manager.

Emma Alanis, another intern, said the site visits were time-consuming. Some parish managers knew a lot about their electricity and natural gas accounts, but others didn't. They also found meters that were out of service or not being used.

"That's what a lot of the work was, just like a big scavenger hunt of finding these meters and trying to collect all the data," she said.

One of the parishes Singler's team worked with was Mission of Our Lady of the Angels, located on Chicago's West Side in one of the city's poorest neighborhoods.

Sr. Stephanie Baliga, who oversees the parish's maintenance and facilities, said the benchmarking process "forced [us] to think of our energy use more, because I had access to the data." In the two years after the initial data collection, the parish replaced its roof, as well as a massive 1950s-era boiler that looked like a train engine.

A natural gas meter is seen on the campus of St. Nicholas Parish, in Evanston, Illinois. The parish was part of efforts to benchmark energy use in the Chicago Archdiocese to better analyze power demand and identify ways to limit it. (Diego Lara-Perez)

Both upgrades were primarily finance- and performance-driven decisions, Baliga said, but the earlier benchmarking will allow Mission to track how energy efficiency improves and its bills lower. Early analysis has shown improvement in both. The savings in energy costs can then be diverted to its other ministries, such as the robust food pantry it operates for hundreds of families each week — with demand tripling during the pandemic. The parish is also pursuing adding solar panels to its new roof.

"That's our main focus," Baliga said, "is that as we're able to decrease energy use and use resources more efficiently … we'll be able to serve the poor better in every capacity."

Mohammadi, one of the interns, said it was "cool" to see parishes gain control of their energy use, "not just to save money, but because they thought it was great for the Earth."

With the properties required by the city completed, Singler said, the next step is to work with parishes to manage their own accounts and upload their own data. Currently, he's working with volunteers at three parishes in the Oak Park suburb to collect the same kind of information the interns did. At Loyola Chicago, Durnbaugh is exploring new funding and grant opportunities to continue the intern program.

The impact of the coronavirus on benchmarking efforts has been limited, primarily by diverting Singler's attention to helping parishes manage their energy contracts with local utilities and avoid penalties. Future decisions looming with the Renew My Church reorganization plan, as well as deferred maintenance costs facing parishes, have done more to slow the pursuit of new energy upgrades or further benchmarking expansion.

Five years after announcing its goal, the archdiocese continues to work toward benchmarking energy at all of its properties. It first emphasized quantity, by trying to benchmark the largest possible number of buildings. Now it's focused on quality, data that is more useful to its parishes, schools and organizations as they evaluate how they can use energy best.

"It comes down to we want to do it right. We don't just want to do it to do it," Singler said. "We want to make sure that whatever we're doing can be used and is helpful. And that's kind of why we pivoted a little bit."

EarthBeat | Tracking energy use in the Chicago Archdiocese, one meter at a time