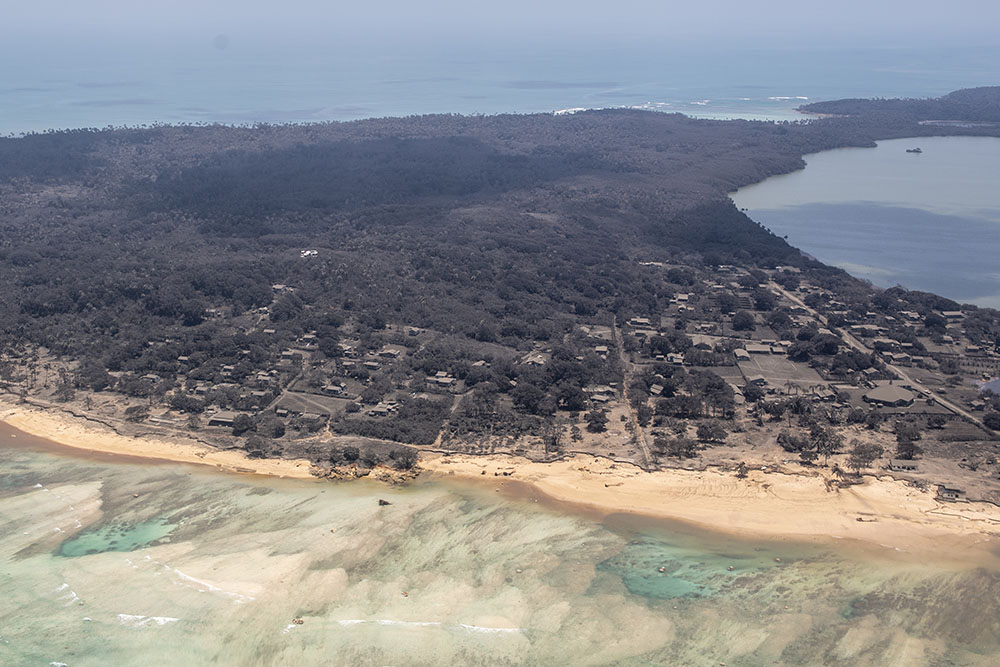 The Jan. 15 massive volcano eruption in the island nation of Tonga is a painful reminder that despite tremendous resources and scientific advances, there has been little collective action to prevent natural disasters, said one of Pope Francis' top advisers.

"Even in face of the impressive forces of catastrophic events, such as those of the Tonga islands, the resources dedicated to the study and prevention of catastrophes remain miniscule compared to those dedicated to the study and production of increasingly deadly and sophisticated weapons," Jesuit Cardinal Michael Czerny said during a prayer service for Tonga on Jan. 24.

The prayer service was organized by the international Community of Sant'Egidio at the Basilica of Santa Maria in Trastevere in Rome.

The cardinal went on to quote Francis' 2015 ecological encyclical "Laudato Si', on Care for Our Common Home," stating that "never has humanity had so much power over itself and nothing guarantees that it will use it well."

In the 10 days since a volcano and a subsequent tsunami wreaked havoc on the isolated Polynesian islands of Tonga — affecting an estimated 84% of its population — the hard-to-reach island has had limited contact with neighboring countries due to the disaster's impact on its telecommunications system.

"Prayer wants to break the isolation and shorten the distances," said Czerny, who is the interim head of the Vatican's Dicastery for Promoting Integral Human Development. "The catastrophe of the Tonga islands shocks us for its enormity, for the sudden unleashing of the forces of nature that, unexpectedly, make us all smaller and more fragile."

As its residents have struggled to find food and clean drinking water, and many have been displaced from their homes, "those who suffer are never far from us who in Jesus recognize ourselves as 'children always loved' by the Father, called to share with the human family a single destiny, in the common home that is the Earth," Czerny said.

The cardinal went on to reflect on the pandemic, which — like the devastation caused by natural disasters — has made clear that "we have also deluded ourselves into thinking that we are almost omnipotent, that we dominate nature, the world, as if it were our own work and not God's," he said.

As he concluded his reflection, the cardinal prayed for Tonga and its inhabitants, and also all men and women, "so that they may devote the resources of science to lifting peoples out of disease, natural disasters, poverty and climate change."

"May our prayer overcome every distance, manifesting our belonging to the one family of God, in which we are all welcomed as adopted children," he prayed. "Despite the distance, we share a common destiny, we are children of the one Father, we are all brothers and sisters."