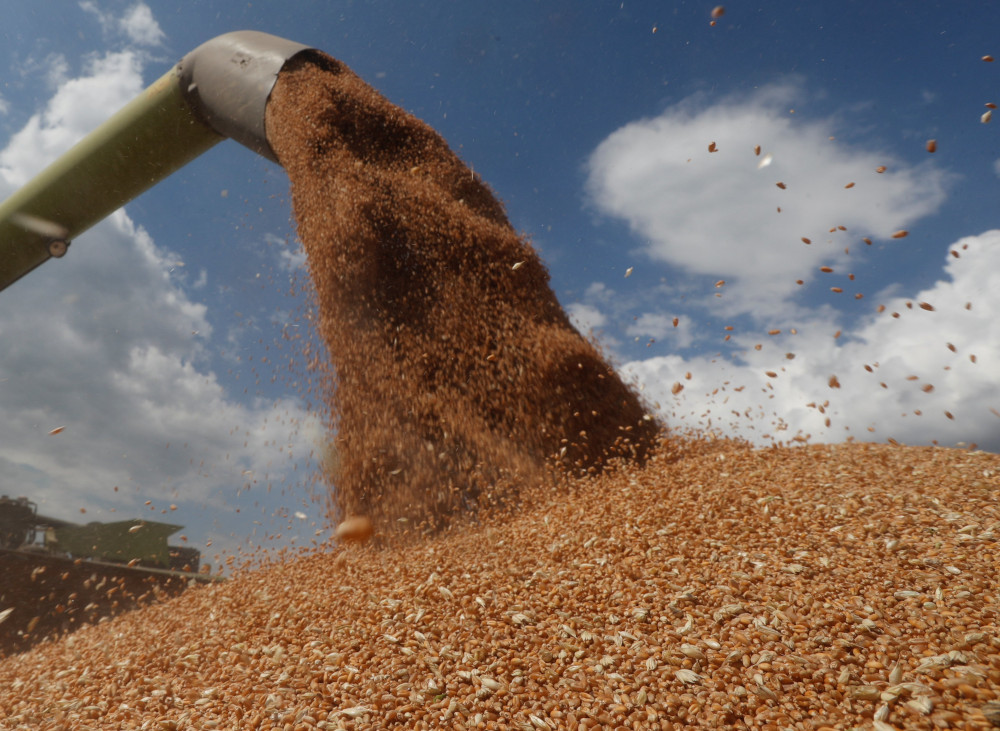 Even before February had turned into March, farmers and accountants alike were consulting their calculators and spreadsheets to calculate the economic hit that's coming as a result of the Russian invasion of Ukraine.

It was a near-certainty that just about everyone would feel some kind of squeeze in the weeks and months ahead.

Lochiel Edwards, a Catholic farmer who tends 4,000 acres of wheat near Big Sandy, Montana, about 75 miles from Great Falls, said that a generation ago, he cut his energy usage, always a major cost factor in farming, when he moved to a no-till operation.

"Pretty much everyone — not every single one, but it's going to be 97% of the farms in Montana — has a no-till operation," Edwards told Catholic News Service about the practice of planting crops without tilling the soil.

"One of the problems in a dry country is wind erosion," he said. "And the no-till system ended that. That was a major shift for this country to go to that. It not only cut the energy use tremendously, but it also cut the energy problems. And the soil held tremendously."

Last year, Edwards cut his energy use even more — though not by choice.

"With drought, we used far less energy. There really isn't any energy expendables to increase that crop. It's all about rain. It's a pretty dry country, and rain is always a limiting factor," he said. "No way that we could spend our way out of that one."

With those comments, Edwards revealed two of the key words in the current situation facing farmers and, by extension, consumers: wheat and drought.

Ukraine is one of the world's largest wheat-producing countries. But with a reported 1 million of its estimated 41 million people having already fled their homeland since the Russian invasion, there may well be fewer farmers to grow crops amid war's innate uncertainty. And even if they can grow wheat, there's no guarantee that Ukraine's ports will have avoided war's ravages and be able to ship it.

Russia is the world's largest wheat producer and a significant wheat exporter. But with economic sanctions already having put the country in a viselike grip, Russia's ability to export its wheat and other crops could be severely crippled at harvest time, forcing many of its typical trading partners — notably those in the Middle East and northern Africa — to go without.

This is not the first price shock for wheat. According to the International Monetary Fund, in the first few months of the coronavirus pandemic, wheat prices surged 80%.

By March 2 of this year, wheat futures had climbed to $10.59 per bushel, the highest price since 2008, according to Foreign Policy magazine.

'Armed conflict and disarray in a major agricultural area will likely have an impact on markets for crops and inputs in the U.S.'

And if war isn't a destabilizing factor in and of itself, hunger is.

Russia also is a top exporter of fertilizer. Edwards typically applies about 200 pounds of fertilizer per acre each year. "That's 800,000 pounds. So it adds up. And that's a lot of transportation (costs), too," he said.

"One of the problems on the fertilizer front is that none is manufactured in Montana. The United States uses a lot of stuff imported from places like Belarus (which could likewise be at risk of sanctions), Morocco, Russia, Canada," Edwards continued. "This Russian debacle is going to have a deleterious effect on our fertilizer prices, as well as availability. So it's all linked together."

"Armed conflict and disarray in a major agricultural area will likely have an impact on markets for crops and inputs in the U.S.," said a March 3 statement from Mike Stranz, vice president of advocacy for the National Farmers Union. "Inputs" refers to fertilizer, seeds, pesticides, etc.

"It remains to be seen how exactly this will be felt. Prices for fertilizer were already high, and a disruption like this could exacerbate the soaring prices," he said.

Stranz added, "During our convention this week, NFU members reflected on how fortunate America's family farmers and ranchers are to be able to debate and adopt policy positions in a democratic society."

Despite the higher costs, will the greater demand for a scarcer commodity mean a windfall for Edwards?

"Grain markets started going up before most of the rest of the products started rising, but of course that does very little good. We had a drought last year," he replied. "About 80% of our crop goes to Asia," he added, although higher fuel prices to transport the goods amid a supply-chain bottleneck would cut into those margins.

Edwards said, "I tend not to worry about things I can't control. Worrying, I found out a long time ago, worrying is something I'm not good at."