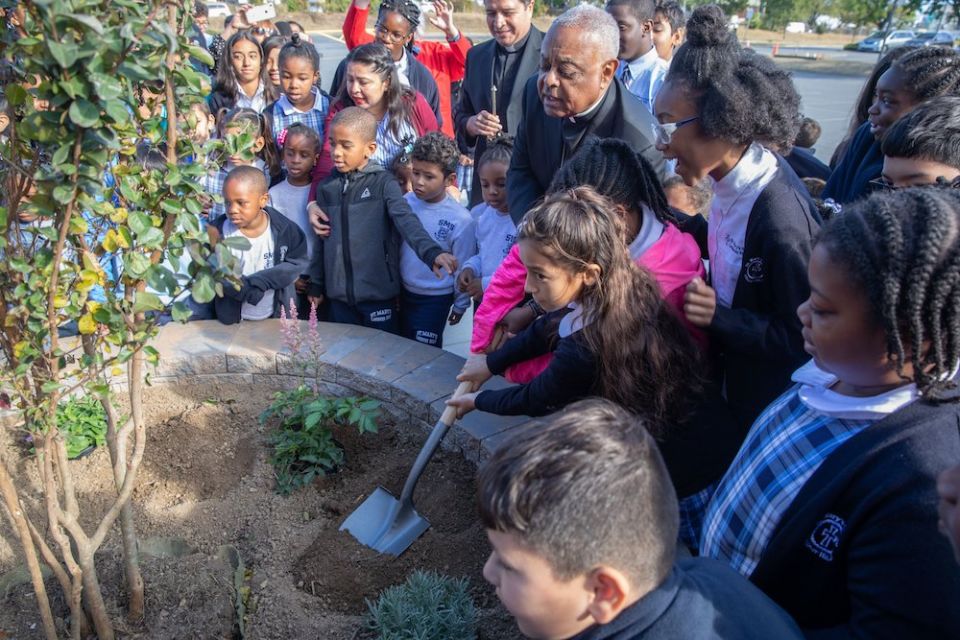 With a new action plan, the Archdiocese of Washington is encouraging parishes, Catholic schools and other institutions, families and individuals to follow the guidance of Pope Francis to protect the earth, care for all human life, and combat climate change using education and actions small and large.

The "Laudato Si': Embarking On a Seven-Year Journey Promoting an Integral Ecology" action plan released by the archdiocese Aug. 16 uses Pope Francis' 2015 encyclical on the environment, "Laudato Si', on Care for Our Common Home," as the framework for educational, spiritual and practical steps to help protect the earth.

It includes educational resources connecting Catholic social justice teaching to care for creation, such as study guides and videos that might be used in school, parish or community settings.

Other sections suggest steps that individuals, families, churches, schools and other organizations can take to limit pollution, reduce consumption of water and electricity, and protect natural resources.

The plan calls on people of faith to "embrace environmental science and the science of climate change to protect and preserve the environment for future generations because the earth is God's wondrous creation and gift to humanity."

Crafted for the people of the Archdiocese of Washington, this Laudato Si' action plan seeks to work toward an integral ecology — the concept in Pope Francis' encyclical that connects caring for all human beings with concern for the environment. The action plan aims to reflect an integral ecology in the life of parishes, Catholic schools and with the faithful in the archdiocese.

The action plan ranks suggested activities on a scale from "easy," such as "cut down on single-use plastics," to "moderate," including "incorporate justice and care for our common home into faith formation programs at all levels," and a few "advanced" activities including "compost food scraps."

In his introductory letter to the plan, Cardinal Wilton D. Gregory noted that it "is for all of us! We are all called to protect our common home according to our ability and means."

He quoted Pope Francis' encyclical, calling people to "new dialogue about how we are shaping the future of our planet. We need a conversation, which includes everyone, since the environmental challenge we are undergoing, and its human roots, concern and affect us all. We require a new and universal solidarity. All of us can cooperate as instruments of God for the care of creation, each according to his or her own culture, experience, involvements and talents."

The Washington plan was published one week after the United Nations panel on climate change released a grim report about the state of a global climate emergency.

Genevieve Mougey, director of the Washington Archdiocese's Office for Social Concerns, told the Catholic Standard, the archdiocesan newspaper, that the U.N. report "illustrates the gravity of the situation we are facing," but that Christians are called to approach the climate crisis from a basis of hope.

"Hope moves us forward to live in God's call of love and the care for our common home," she said. "The reality of what it means to be a Christian is that we live in hope. That's what the encyclical and this action plan call us to do — act out of hope and faith in God's love for us and our common home, the earth."

The plan includes an offer of grants to parishes of from $500 to $1,000 to offset initial expenses of implementing it. There also are links to other programs that can significantly reduce the costs of steps such as installing solar panels on parish property. 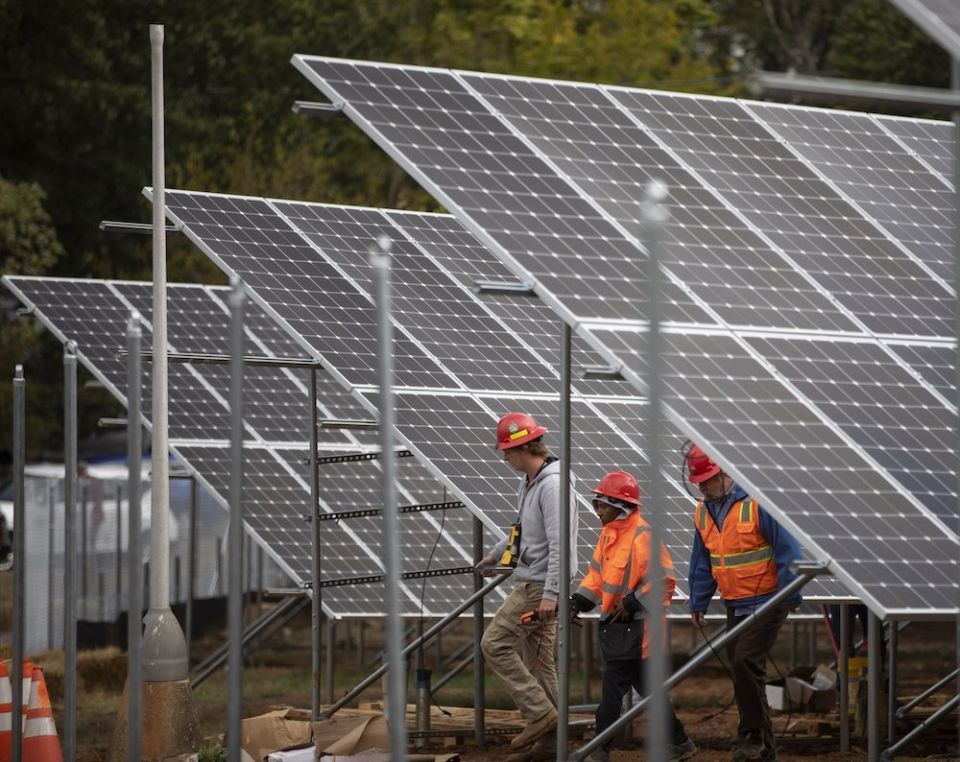 In 2019, workers installed more than 5,000 solar panels on Catholic Charities property in Northeast Washington. The solar array, the largest such project in the District of Columbia, was fully operational by the end of January 2020. (CNS photo/Andrew Biraj, Catholic Standard)

The plan is the product of 18 months of work by the laity-led archdiocesan Care for Creation Committee and its Office of Social Concerns.

When he was archbishop of Atlanta before coming to Washington in 2018, Gregory shepherded a similar plan that soon was widely adopted in Georgia and even adapted in other states.

Bob Simon, a member of the Care for Creation Committee, told the Catholic Standard that although the committee had been active for many years, Gregory's arrival in Washington energized the group and its activities.

"Suddenly we had an archbishop who celebrated our efforts," Simon said. "He had such a strong record from what he did in Atlanta, creating the first archdiocesan action plan, that it created a lot of energy and interest."

Simon, an energy policy expert who is retired from positions in the U.S. Senate and the Obama administration, said that Gregory's intentions for the plan were clear, as the committee drafted its framework for completion by archdiocesan staff.

"There was a very clear message that he has an expectation that pastors, parish staff and parishioners have a role to play" in addressing climate change, Simon said.

Mougey noted the plan underscores that environmental protection is integral to protecting human life. For example, in the plan's section on ecological education, it describes how to link care for creation with concern for marginalized communities as "important dimensions of what it means to be pro-life."

In his letter, Gregory asked people to join him in the new dialogue on the environmental challenges facing the world that Pope Francis has called for, so future generations in the archdiocese can continue to "enjoy the natural beauty and splendor of the Chesapeake Bay, cherry blossoms and Potomac River."

As part of activities related to the release of the 22-page action plan, the archdiocese will celebrate an Oct. 3 Mass at with the theme: "Created by God: A Celebration of the Dignity of Life." People can attend the in-person Mass or follow it via livestream.

The Mass will highlight St. Francis of Assisi, patron saint of ecology, whose feast day is Oct. 4. The liturgy also will mark the start of October as Respect Life Month and "celebrate all of God's creation."

[Patricia Zapor writes for The Catholic Standard, newspaper of the Archdiocese of Washington.]