by
Spirituality
This article appears in the Advent Meditation with Laudato Si' feature series. View the full series. 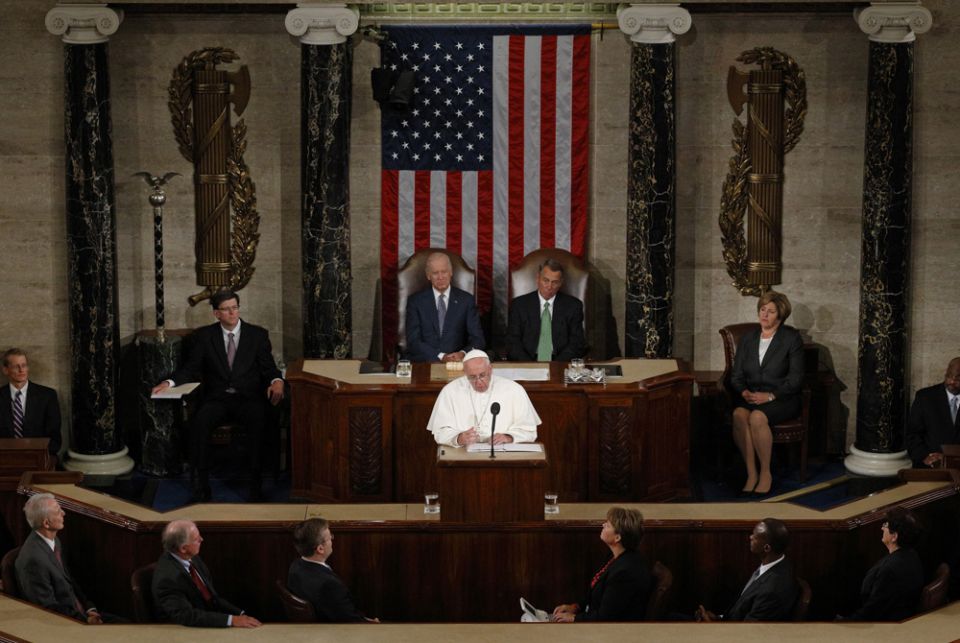 Pope Francis addresses a joint meeting of Congress in Washington Sept. 24, 2015. Also pictured are Vice President Joe Biden and House Speaker John Boehner, both of whom are Catholic. (CNS/Paul Haring)

Editor's note: NCR is sharing Advent reflections based on "Laudato Si': on Care for our Common Home," by former NCR editor and publisher Arthur Jones. These were originally published in 2015 by St. Vincent de Paul Parish Community in Baltimore. He wishes to acknowledge the inspiration of the Celtic invocations of Alexander Carmichael's Carmina Gadelica. We'll publish his reflections for Weeks 3 and 4 on Dec. 15 and 22. You'll find an introduction to the series here, the first installment here and the second one here.

U.S. Catholicism has produced iconic photographs showing people demonstrating for what they believe, from Cesar Chavez and the United Farm Workers to the Plowshares anti-nuclear stalwarts.

We have enough imagination and sufficient reality pixels stored in the recesses of our brains to conjure up for ourselves three other images: 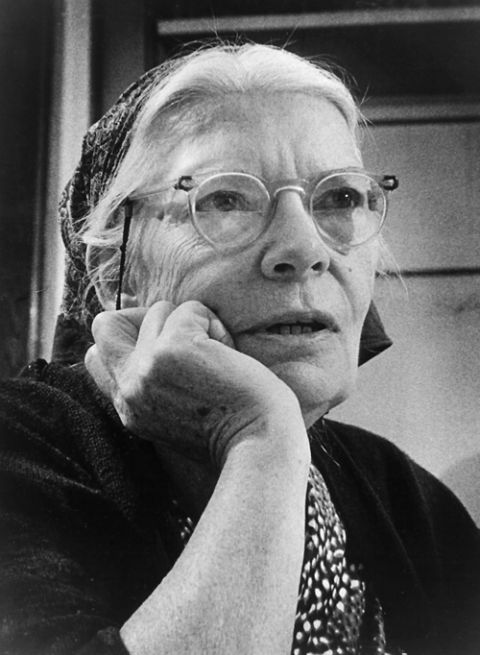 All took their stands knowing that vast segments of the society against which they faced off scorned, pitied, ridiculed and dismissed them — and their statements and arguments — as simple-minded and out of touch with the real world.

But all represent the real world.

That's the point the pope is trying to make.

What does that actually mean and actually do to us?

In his 2015 The Age of Acquiescence: The Life and Death of American Resistance to Organized Wealth and Power, Steve Fraser provides us with a Made-in-America example of the mindset Pope Francis has set his cap against globally.

Fraser writes that "the conspicuous consumption of the nouveau plutocracy inevitably earned the era a reputation as the country's second Gilded Age. The parallels were obvious. There was the same insatiable lust [as the first Gilded Age] for excess … vulgarity."

The author describes how wealth distribution inequality and income inequality "increased at a speed never before seen in American history." The rest we know: "While ten million lost their jobs to plant closings and layoffs" as American manufacturing was sent overseas and factories and cities turned to dust, CEOs' earnings "ballooned 500 to 700 percent."

Francis is telling us these insatiable lusts are at the root of the Earth's and humanity's pending disasters; that it is the lust for profit and personal gain, material goods and conveniences that have produced conditions that mean "doomsday predictions can no longer be met with irony or disdain."

"We may well be leaving to coming generations debris, desolation and filth," the pope again warns. "The pace of consumption, waste and environmental change has so stretched the planet's capacity that our contemporary lifestyle, unsustainable as it is, can only precipitate catastrophes," catastrophes we're already witnessing "in different areas of the world."

Pope Francis is asking us to stand and confront. If he is David in white, up against the Goliaths in $2,000 suits, against global priorities set by powerful groups and government, he asks us to be David in groups and coalitions and ministries and communities, up against the same adversaries, but — and this is hard — but maybe, up against, too, people next door, perhaps people in the next room. At this point we can almost hear Jesus talking about issues that set brother against brother, sons against fathers. Consequently, if we are to speak firmly, it must be in a gentle, a most Christian, way.

This is the tone as well as the basis for Francis' anticipated "dialogues," as in "Dialogue on the Environment in the International Community," "Dialogue for New National and Local Policies," "Dialogue and Transparency in Decision-Making," "Politics and Economy in Dialogue for Human Fulfillment," and "Religions in Dialogue with Science." The dialogues lead back into his thoughts regarding "Ecological Education and Spirituality."

It is to educate us, and embolden us in our spiritual questing, that gives the pope the impetus to push us as hard as he is.

He says, "a global consensus is essential for confronting the deeper problems, which cannot be resolved by unilateral actions. … We know that technology based on the use of highly polluting fossil fuels — especially coal, but also oil and, to a lesser degree, gas — needs to be progressively replaced without delay."

The pope says that this period we are living through "may well be remembered as one of the most irresponsible in history."

Francis does not mince words. He warns that gains in protecting biodiversity have been regrettably few, for countries place their national interest above the global common good.

Then he starkly tells us: "Reducing greenhouse gases requires honesty, courage and responsibility" and while powerful countries have to be the most courageous, ordinary individuals cannot opt out of being involved in such change.

O God, there seems to be no end to what must be undertaken. But I do know that Pope Francis knows that these oppositional mindsets that stand in the way of confronting ecological problems are the same mindset that "also stands in the way of achieving the goal of eliminating poverty." Let me take heart, and calmly see what I might do — knowing I can't do everything. 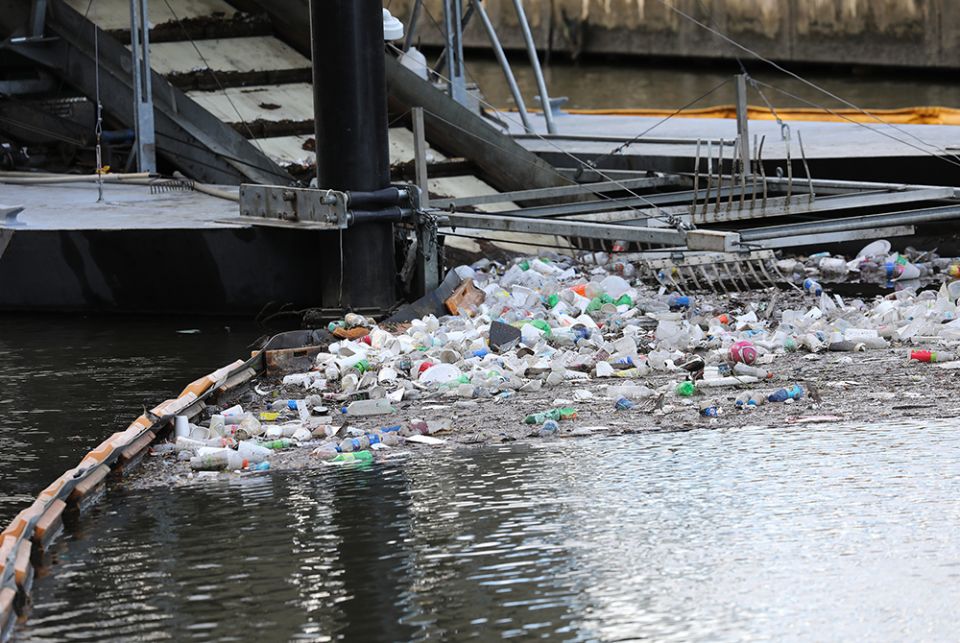 The pope wants "politics and economy in dialogue for human fulfillment." We only have to look at our own national politics, and the many-viewed approaches to our own — comfortable by world standards — economic life to realize how hard creating that dialogue will be.

"Today," the pope continues, "in view of the common good, there is urgent need for politics and economics to enter into a frank dialogue in the service of life."

Just looking at the state of the common good dialogue in our own nation, this seems like a pious hope. Not to Francis, he is holding before him banners that wave images of disaster. He has been to his own mountaintop and this is what he has seen. On he goes:

Saving (the) banks at any cost, making the public pay the price, foregoing a firm commitment to reviewing and reforming the entire system, only reaffirms the absolute power of a financial system, a power which has no future and will only give rise to new crises. … [The response to the 2007-2008 financial crisis] did not include rethinking the outdated criteria which continue to rule the world. …

It should always be kept in mind that "environmental protection cannot be assured solely on the basis of financial calculations of costs and benefits" [referencing the Compendium of the Social Doctrine of the Church]. … We need to reject a magical conception of the market, which would suggest that problems can be solved simply by an increase in the profits of companies or individuals.

We are to reject the Western world's, the developed world's "magical conceptions." Reject them especially when those who oppose these magical concepts are accused of 'irrationally' standing in the way of progress. Dear God, this is an awful lot to take in, knowing how our country and our world operate. Where do we find an opening? Where do I go, what do I do to stand with Pope Francis?

Dear God, this is an awful lot to take in, knowing how our country and our world operate. Where do we find an opening? Where do I go, what do I do to stand with Pope Francis?

Wednesday, Dec. 18: Outside the cocoon

The pope is unrelenting as he plows ahead:

The pope, in a most telling section, then calls for an "ecological conversion."

We are not Christians mocked for our stances, and certainly not persecuted. Is Francis asking why our families and our faith communities are not in the public view, standing firm and tall for an integral ecology? Is it that attempting to live simply by simply living in our cocoons, we have forgotten that we must dare to go outside our cocoon to be seen and heard?

Jesus preached the good news and presented to us the task, the chance, and the necessity of being the good news. We are to act for a suffering Mother Earth and the desperate, materially poor.

We ask God to help us lift up the threatened environment and the desperate poor in every encounter; the tremendous challenge of being a 21st century Christian means we lift up the poor and protect the environment as a mark of our humanity.

What Francis has done is said that while we may instinctively feel these things, he has insisted we must take steps to understand them.

How do we do it? Perhaps as our ecologically-attuned Christian forebearers did when they related to stranger, environment and cosmos. We can gain strength where they gained strength. In prayer. So we join hands with them in their rural calm, once more with our Celtic Christians for a little spiritual respite in this prayer collected by Alexander Carmichael:

God with me protecting,
The Lord with me directing,
The spirit with me strengthening,
For ever and for evermore,
Ever and evermore, Amen.
Chief of chiefs, Amen.

The pope is at times forceful, at times gentle, leading us, prodding, guiding. He has asked us in several different ways to take on the world's skewed economic priorities.

We need to stand with him because we are well aware that no area of this encyclical is more likely to have the pope's words more quickly dismissed than when he stands firm against the selfish, heedless and heartless economic ways of the power wielders.

The power wielders' immediate charge was, and always will be, that Pope Francis does not know what he's talking about — and anyway he should stick to religion and stay out of things that don't concern him. (Even Catholic politicians seeking the presidency have said they don't take their economic guidance from the pope.) By the end of our third week of reflections with the pope, we are well aware and accept that indeed Pope Francis knows precisely what he is talking about.

His words are countercultural, that is, counter to the developed world's economic profits-at-any price culture, so, counter to the global economic concentrations (think rich nations and free trade zones) of the world, both corporate and economic.

The language may have changed, but the same sentiments prevail. We must pause and ask ourselves again, "Does anything I do contribute to poverty and deprivation, including depriving the Earth and all life on Earth of sustenance?"

Touch the hearts
of those who look only for gain
at the expense of the poor and the Earth.

Spend Advent with Laudato Si' and a question: What is God asking of me?

EarthBeat | Week 3 of Advent meditations with Laudato Si': Putting ourselves out there