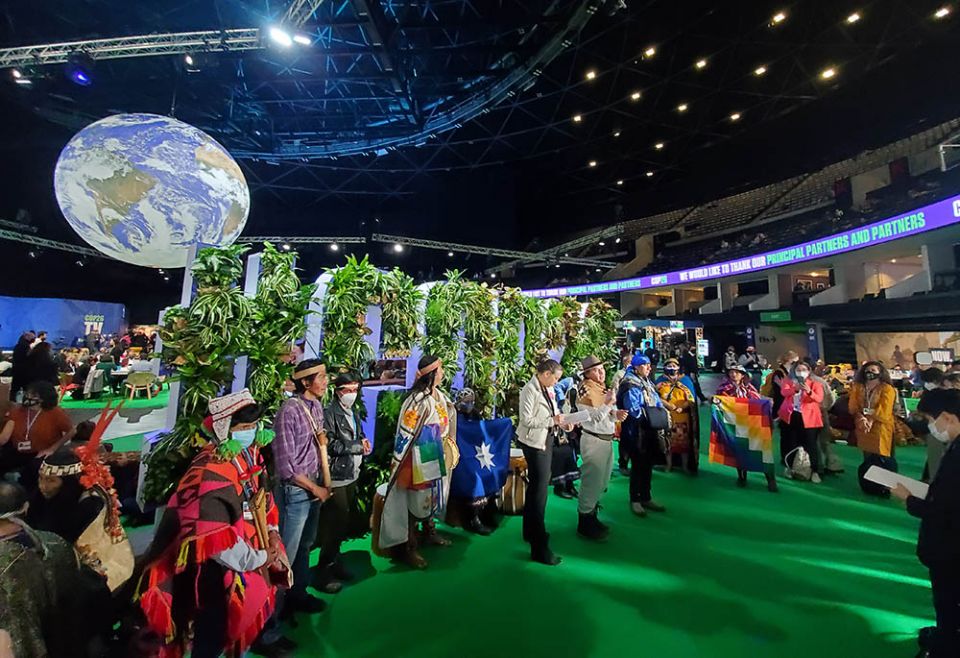 Members of the Minga Indígena, a collective of Indigenous communities throughout the American continents, address the media in the Blue Zone, the main arena for negotiations at the COP26 U.N. climate summit on Nov. 3, 2021. (NCR photo/Brian Roewe)

Glasgow, Scotland — Standing on the Squinty Bridge above the River Clyde, Ruth Miller, a Dena'ina Athabaskan, described how climate change has already altered her homeland near Bristol Bay in Alaska.

"We are in deep crisis when it comes to our food systems already," the 24-year-old told EarthBeat, stating that warming waters have left salmon and other fish dead in streams. With fewer fish in the watersheds, subsistence fishers struggle to fill their freezers and smokehouses for winter months.

Farther north in the Arctic, she said melting sea ice has exposed other communities to stronger sea storms. In some cases, it has led to some of the first environmental refugees in the United States.

Eriel Tchekwie Deranger, a Dënesųłiné woman and member of the Athabasca Chipewyan First Nation in Canada's Alberta province, has witnessed the impacts of climate change. She also has seen how its primary driver, the extraction and burning of fossil fuels, has devastated the land that is home to boreal forests and free-roaming bison, but also to tar sand pits mined for heavy crude.

"For one barrel of oil, they have to use four barrels of clean water from our river systems," she told a crowd of onlookers at a press event organized by the Indigenous Environmental Network during the United Nations climate conference, COP26, here. 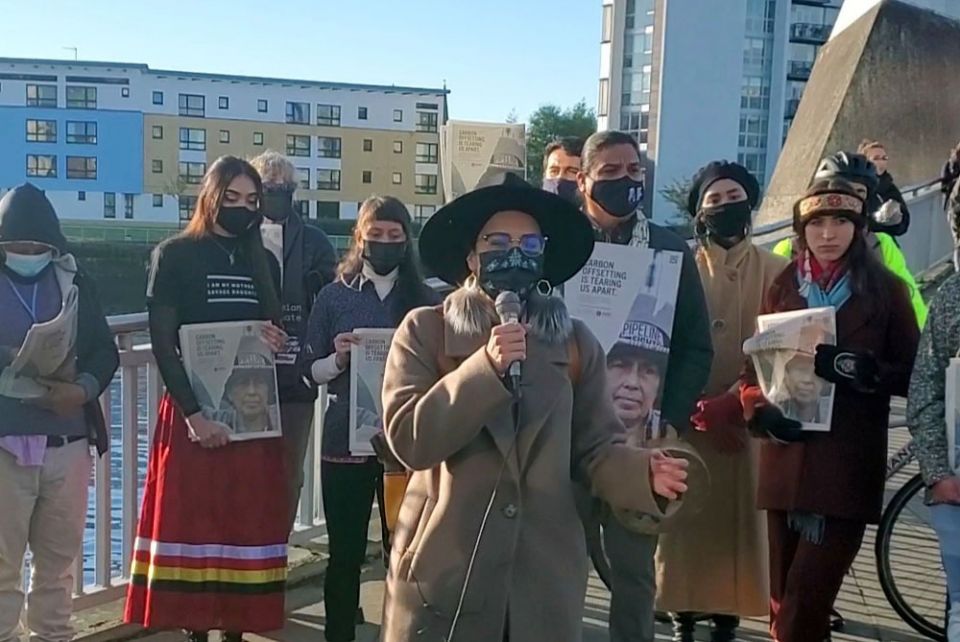 "We don't need net zero. We don't need carbon markets. ... Indigenous peoples are leading the way, and it's time for these people to get out of the way and let us take our land back and do what we've always done," Eriel Tchekwie Deranger, executive director of Indigenous Climate Action, said during a press event Nov. 3 during the COP26 climate change summit. (NCR photo/Brian Roewe)

Extracting and transporting that oil across the North American continent in pipelines destroys waterways, she added, including some where she swam and drew drinking water as a child. And the related pollution has led to increased rates of cancer, autoimmune diseases and respiratory illnesses among her people, she said.

Deranger, executive director of Indigenous Climate Action, said that while climate change proposals such as net-zero targets and carbon offset markets are debated in the nearby Scottish Event Campus, the main COP26 venue, the voices of those who stand to bear the brunt of climate impacts, but who also offer some solutions, are largely shut out.

Demonstrations from the frontlines of climate change have been on display throughout the halls, side events and protests in and around COP26. Less visible, say Indigenous leaders and their allies, are the solutions they have championed and see as crucial, not only to stem global warming but to do so in ways that won't destroy their lands and livelihoods.

Throughout COP26, faith-based organizations, including various Catholic development agencies that are part of Caritas Internationalis, have sought to use their platforms to lift up the voices of those most impacted by climate change, especially because the pandemic has made it difficult for many to attend the event. Catholic organizations have brought partners from countries like Malawi, Zambia and Colombia.

That's a main reason why Benson Makusha and Innocent Odongo of the International Young Catholic Students movement, or IYCS, came to Glasgow.

Odongo, the group's secretary-general, said young people and Indigenous communities are among the populations that will be most affected, "so there is urgent need for them to be part of this."

That's especially true in Africa. The world's second-largest continent is responsible for just roughly 4% of present-day greenhouse gas emissions, but is expected to feel some of the greatest impacts of rising temperatures. Women, who in many households but particularly in rural areas are responsible for gathering water, fuel needs and farming, are especially vulnerable to climate change.

That poses serious challenges for a continent where more than one-third of the population, some 490 million people, live in poverty, and which has the world's largest youth population — 200 million people between ages 15 and 24, many of whom are unemployed, said Allen Ottaro, executive director of the Catholic Youth Network for Environmental Sustainability in Africa.

We need more than just eloquent speeches to address the #ClimateEmergency. What we need are progressive #climateactions, individual and collective, nationally, regionally and globally, to care for the most vulnerable communities on the frontlines of the #ClimateCrisis. #COP26 pic.twitter.com/Qlg3HlAY4F

"And so this vicious cycle of poverty and climate change is only going to worsen," he told EarthBeat.

Makusha, who is IYCS regional coordinator for Africa, said the decisions made in COP26's early days gave reason for optimism, particularly commitments to support less-developed countries with resources and funding to respond to climate change, not only by mitigating greenhouse gas emissions, but also by adapting and increasing resilience to the impacts of global warming.

Faith communities have joined other environmental groups in pushing for an even 50-50 split between mitigation and adaptation financing through the Green Climate Fund, and as spelled out in the Paris Agreement. So far, wealthier countries have fallen short on their initial pledge of $100 billion annually to the fund, and adaptation currently represents around a quarter of pledged funding.

Those groups have also pressed governments to commit financing for losses and damage already caused by climate change.

More than $230 million in new pledges were made to an adaptation fund Nov. 8 to assist the most vulnerable countries.

"But it still then remains to be seen how this commitment is going to be delivered and how swift it's going to be," Makusha said.

That concern is shared by many of the civil society representatives at COP26, and has been for decades. But skepticism is particularly acute among people in developing countries, where promises of funding can be plentiful, but there is less certainty about whether it will reach the communities that need it most, or whether fossil fuel extraction will continue.

Odongo said it is difficult for groups like his to access those promised resources, and that has been a focus of his discussions at the climate conference.

"I am sometimes amazed by the figures, but I just wonder where they end up," Odongo said.

Many people say financing must get into the hands of Indigenous and other local communities. A common statistic cited at COP26 has been that 80% of the world's biodiversity is protected by Indigenous people, who represent just 5% of the global population. With a centuries-long track record of living in harmony with nature, they say the true solutions to climate change must start there, as well. 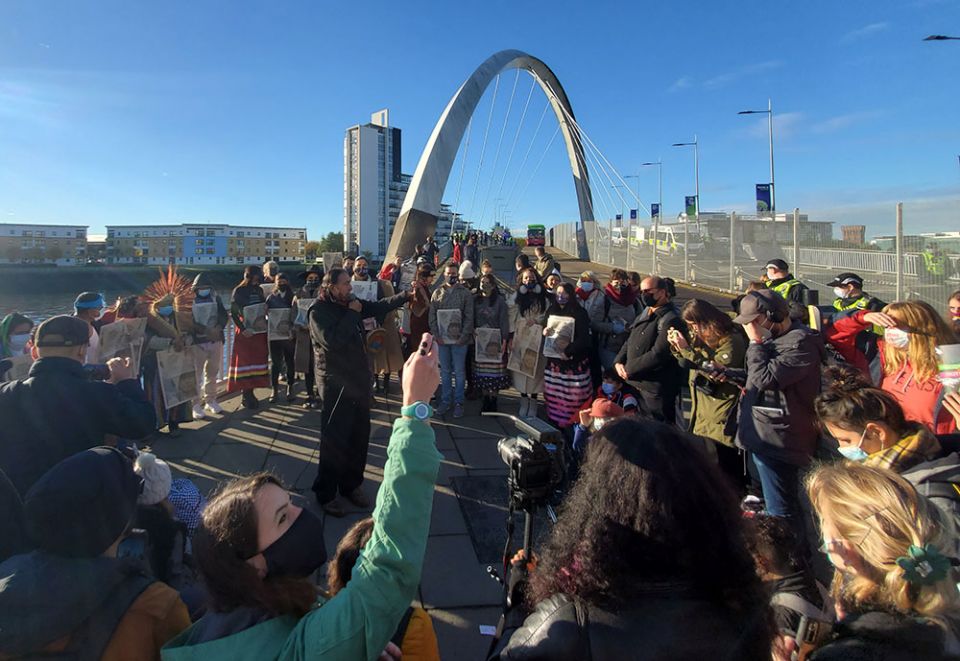 During a Nov. 8 webinar on climate change in Africa co-hosted by Pax Christi Scotland and the University of Scotland, speakers stressed that the Catholic principle of subsidiarity, in which decision-making involves those most affected, is essential.

Fr. Robert Sowa, of the Bo Archdiocese in Sierra Leone, said Pope Francis has emphasized the importance of subsidiarity in both the church's response to the dual crises of climate change and the COVID-19 pandemic and his call "to hear both the cry of the Earth and the cry of the poor."

Sowa said he is "disappointed" that the voices of those most impacted have not been given greater priority at COP26, where a study found that fossil fuel companies have more than 500 representatives, more than any country.

He said the signs of climate change are present in Sierra Leone. Within the past two decades the once-distinct dry season (November to April) and rainy season (May to October) have been replaced by more frequent dry spells and irregular rainfall, which has hurt farmers and the subsistence agriculture on which much of the country's population depends. 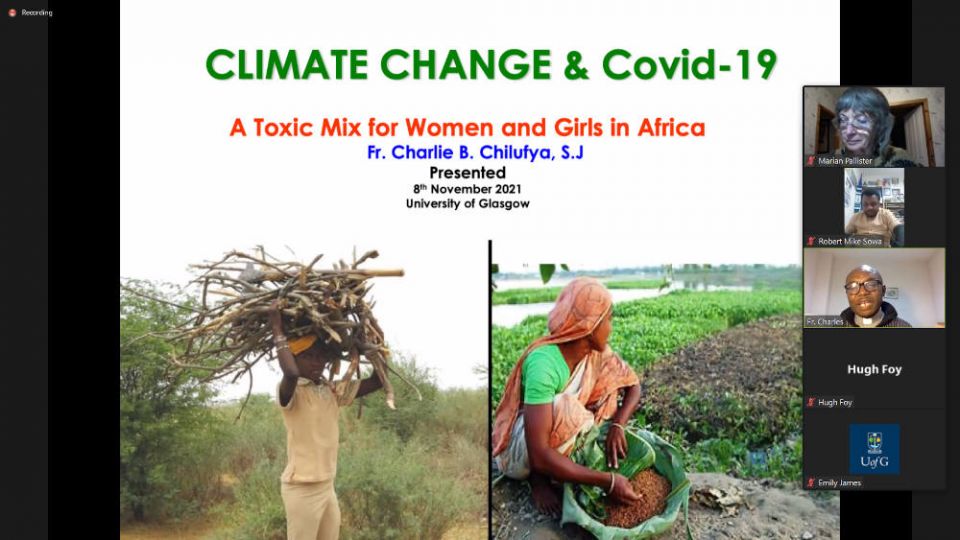 During a Nov. 8 webinar, Jesuit Fr. Charles Chilufya speaks on the special challenges that women and girls in Africa face from both climate change and the COVID-19 pandemic. He cited statistics showing women are responsible for the majority of household water and fuel needs, and work in positions like farming that make them most vulnerable to climate variability and weather-related disasters. (NCR screenshot)

In 2017, powerful rainstorms triggered major landslides and flooding near the capital of Freetown, leaving more than 1,100 people dead or missing. Sowa's brother was among the victims, many of whom lived in shantytowns outside the capital city.

"It is imperative on the local church of Sierra Leone, in dialogue with other Christian and religious traditions in the country, to be at the forefront in providing prophetic voice and leadership for tackling this climate crisis. This demands listening to the voice of the poor themselves," he said.

Ottaro said a major focus at COP26 for African countries is for climate solutions, particularly those involving a transition toward a green economy, to invest in jobs and opportunities that can help lift people from poverty while eliminating emissions.

One project his group supports is the Great Green Wall, which aims to plant millions of trees in the Sahel region to stop desertification.

Back on the bridge outside the blue zone, the main COP26 meeting area, Miller said that pledges to end deforestation, like the one made by more than 100 countries during the first week of the conference, raise suspicion among Indigenous people that they will lead to future land grabs by governments in an effort to meet those targets.

"What we need is repatriation of lands to Indigenous communities," she said. "We need land back and oceans back, because we know those methods of exploitation, of profiteering, will never be on the table for our communities."

Deranger added that studies have shown that biodiversity, which is critical for stabilizing the climate, improves under the care of Indigenous communities, as does their own quality of life.

"And yet we think that we need electric cars and economic solutions and carbon markets. That is not the solution," she said. "Our communities have always driven the solution."