by
This article appears in the Immigration and the Church feature series. View the full series. 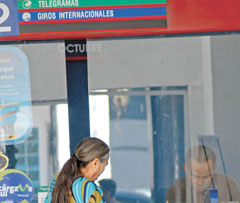 STATEN ISLAND, N.Y. -- José Cedillo used to work as a fabric salesman in Mexico City, but since he came to Staten Island four years ago he has been working any job he can find to support his three children while they attend college in Mexico. For the past two years he’s been cleaning, doing maintenance and restocking the food pantry at El Centro del Imigrante, a day worker center in the New York City borough’s Port Richmond neighborhood. Before this, he worked construction jobs.

Cedillo, who is 50 and has no family in the U.S., can get by in English but finds it easier to tell his story in Spanish, with a coworker translating. He said he feels he is helping his children more by giving them an education rather than material possessions such as a house. He sends them between $200 and $500 every week, and said he is prepared to stay in the U.S. to help them out for as long as necessary.

A couple dozen people had gathered at El Centro one morning earlier this summer, for presentations on public safety and legal aid, then stayed to socialize or rummage through bags of donated clothes. Among them, a man who works construction and repair jobs said he came to El Centro because he didn’t have a job for the day, adding that he usually sends his wife in Mexico $250 to $300 every week to pay the water, electricity and telephone bills. A woman who works as a housekeeper said her husband, who works in landscaping, sends his family in Mexico about $100 every two weeks.

Economists at the World Bank estimate that money sent by immigrant workers back home to Mexico in 2010 totaled about $22 billion, or about 2.5 percent of the country’s gross domestic product, according to a study released in May. These payments, or remittances, are expected to grow steadily in the next couple of years, even amid more recent worries that the U.S. is headed into another economic crisis.

But economists do not attribute this projected increase in remittances to an increase in migration, but rather to a “shift in migrant employments,” from the depressed housing construction industry to service and manufacturing jobs, according to the World Bank’s “Outlook for Remittance Flows 2011-13.” Overall remittance flows to all developing countries (recipients of significant sums in 2010 included India, which received $53.1 billion; China with $51.3 billion; and the Philippines with $21.4 billion) are expected to grow by about 7 to 8 percent annually through 2013, while those to Latin America and the Caribbean are expected to grow by about 9 percent annually.

The recent downgrade of the U.S. credit rating “will not have immediate impact on either the flow of migrants or outflow of remittances from the U.S.,” said Dilip Ratha, lead economist at the World Bank and one of the authors of the study. He said one reason for this is that remittance flows, as well as the flow of migrants, had already stabilized; “people who wanted to return [to their home countries] had returned, and people who are here are not going to change.” Another reason, he said, is that the impact of the downgrade from AAA to AA “is almost imperceptible in terms of changes to interest rates and creditworthiness.”

However, Ratha added that “if politicians become more inward-looking and more protectionist” we may see a “very indirect impact on migrant flows and remittance flows.”

When workers in the U.S. send money to families back home, to Mexico for instance, the benefits are felt on a few different levels, said Sanket Mohapatra, another World Bank economist who worked on the study. Families are able to pay for food, education and medicine, and to make contributions to insurance plans and pension plans; at the government level, the payments chip away at Mexico’s trade deficit.

For families living below the poverty line, whose children often work to help pay for basic necessities instead of going to school, money sent from the U.S. can provide the long-term benefit of education, Mohapatra said. “So children can go to school and they can actually participate in the labor market.” Some remittance recipients may save the money and invest it in a business, reaping benefits down the road, while others save it for retirement or emergencies.

“Remittances act as a form of insurance,” Mohapatra said, “in case there’s a negative shock. If there’s a drought or the rainstorms come, the money becomes actually more valuable.” And because most of the money is sent through money transfer companies, it becomes part of the formal banking system, generating additional benefits for the government of the recipient country.

The authors of the World Bank study wrote that they based their calculations on International Monetary Fund statistics and data from central banks and national statistical agencies. Data on the shifts from one employment sector to another came from the Pew Hispanic Center, according to the study.

If there has been a recent uptick in remittances sent from the Port Richmond neighborhood, it has not yet been felt by Angelo Farcirt, owner of the store Mexico City, which sells party supplies and has a money-transfer service. A couple of years ago, Farcirt said more people were sending money back home, but he estimates that only 20 to 30 percent of those people are still sending money. The reason, he said, is that those people were in construction and now there is no work.

A few blocks away, Carlos Patron, owner of El Vaquero del Oeste, which sells Western-style clothing and has a money-transfer service, said his customers have less money to send home these days. But they still come in regularly, during the weekends and on Monday afternoons, and send about half of their earnings back to families in Latin America, Asia and Africa.

Before the recession they would work a full week and make more money, “but now they work three or four days, they get half pay,” Patron said. “But still people come here.”

[Alice Popovici is an NCR contributor.]

See the related story: Not enough to stem the tide