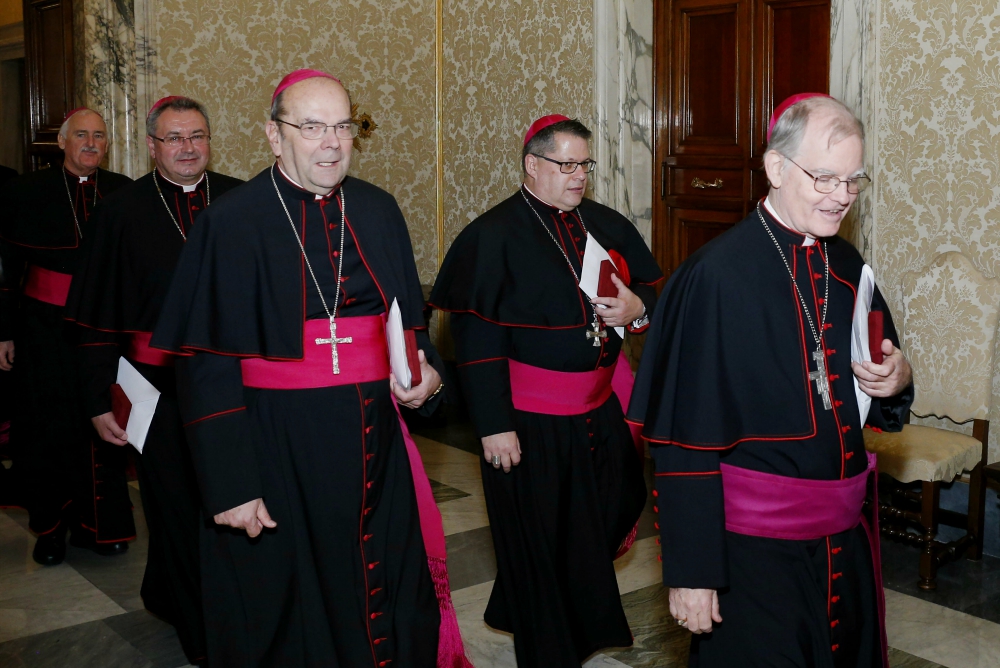 U.S. bishops from the state of New York walk through the Apostolic Palace after meeting Pope Francis at the Vatican Nov. 15. (CNS/Paul Haring)

Novelist William Faulkner wrote, "The past is never dead. It's not even past."

Faulkner's insight is worth remembering in church circles as Catholics deal with the fallout from the ongoing process of bishops investigating other accused bishops.

In the short time since the church formalized that process to deal with its seemingly never-ending crisis, we are finding out that it's had, to put it mildly, its hiccups.

Earlier this year, an investigation into Bishop Michael Bransfield of Wheeling-Charleston, West Virginia, by Archbishop William Lori of Baltimore revealed a pattern of embezzlement and sexual harassment of seminarians. Eventually, transparency was achieved, and a long-term punishment meted out by Bransfield's successor, Bishop Mark Brennan.

But that was not till after the public learned that Lori himself was among those bishops who were the beneficiaries of Bransfield's questionable largesse, smacking of greasing palms to influence his ecclesial superiors. The revelation was an embarrassment to the process.

Following that probe, Bishop Nicholas DiMarzio of Brooklyn, New York, was enlisted to conduct an apostolic investigation into embattled Bishop Richard Malone, who resigned as head of the Diocese of Buffalo, New York, Dec. 4. Meanwhile, DiMarzio himself has been accused of sex abuse that allegedly took place in the 1970s in Jersey City, New Jersey, when DiMarzio was a priest in the Newark Archdiocese.

DiMarzio has a reputation as being tough on sex abuse, and his name was revealed only in the context of what attorney Mitchell Garabedian said will be a lawsuit filed under New Jersey's recently enacted expanded statute of limitations. As of this writing, nothing has been filed; DiMarzio has adamantly denied the accusation and deserves the presumption of innocence.

But again, the people of God are left puzzled. Bishops need to recognize their own checkered history in this regard. Public trust is not easy to gain in these circumstances.

We recognize that bishops retain ultimate authority in the church. And there is a movement, well-chronicled in NCR, of well-heeled traditionalists wanting to jump on the sex abuse reform bandwagon to undertake a purge of clerics found to be lacking in their version of resolute orthodoxy, while letting similar behavior from their ecclesial friends go unnoticed.

Still, there has to be a better way. The bishops themselves enlisted a National Review Board in 2002, and were well-served by respected lay Catholics such as Robert Bennett, Frank Keating and Anne Burke. At that time, they knew they needed the help to regain public trust.

Memo to bishops: You still need the help. The past is far from dead. Bishops investigating other bishops remains a model fraught with historical baggage.

A version of this story appeared in the Dec 13-26, 2019 print issue under the headline: Bishops need to recognize their own checkered history.