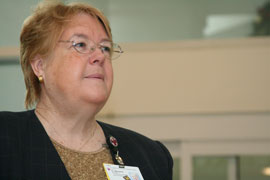 When Bishop Thomas Olmsted of Phoenix declared that Mercy Sr. Margaret McBride had committed a violation of church law deserving of excommunication, he did so with a swiftness and certainty that left no possibility for doubt or nuance. Since that declaration was released in May, however, the bishop’s action has come in for criticism from a wide range of Catholic experts who question its proportionality and its precipitous nature. Some see it as disproportionally harsh; others as inconsistent within the framework of the application of wider Catholic law.

In the widely publicized case, the bishop announced that McBride had been excommunicated for assenting to the abortion of an 11-week-old fetus in order to save the life of a pregnant woman, a 27-year-old mother of four suffering from pulmonary hypertension. The woman was so gravely ill that doctors told her she would die if the pregnancy were not terminated.

McBride, vice president of mission integration at St. Joseph’s Hospital and Medical Center, where theprocedure occurred, was a member of the hospital ethics committee that approved termination of the pregnancy.

The surgery took place in late 2009, but Olmsted did not learn of it until recently. In a statement announcing his decision, Olmsted said McBride was excommunicated because of her position of authority at the hospital and because she “gave her consent that the abortion was morally good and allowable under church teaching.” Olmsted further declared as excommunicated anyone “who gave their consent, encouraged the abortion” or “who participated in the action; including doctors and nurses.”

While theologians and canonists dispute whether excommunications can be issued so broadly and unequivocally without a more detailed process, the primary objections deal with issues at the heart of the case.

Both the recent reactions, as well as writings, of a range of theologians and canonists whose work spans a good portion of the liberal-to-conservative spectrum, suggests that the approach of Olmsted and his chief ethicist, Fr. John Ehrich, while defensible under the most rigid reading of canon law, is outside of the mainstream of scholarship and thinking on the matter.


Olmsted and Ehrich refused to speak to NCR about the case. The diocesan spokesman would only refer to statements already available on the diocesan Web site. Neither McBride nor her order, the Sisters of Mercy, would speak to NCR. Attempts to reach hospital officials were unsuccessful. While it is known that McBride and the bishop met face-to-face at some point after the operation and before the bishop’s declaration, what was said, and who else may have attended the meeting, is unknown. It is not certain whether the bishop intends to pursue removal of McBride from the order, one of the consequences of excommunication.

Did another path exist that would have conformed to Catholic teaching and avoided such an extreme confrontation?

The case is complicated from the start by two directives contained in the Ethical and Religious Directives for Catholic Health Care Services used as guidance by hospital officials. One directive states that abortion is the directly intended termination of pregnancy and is not permitted under any circumstances. Another, however, allows conditions other than pregnancy to be treated, even if they result in termination of the pregnancy. The question seems to be whether an abortion can be considered “treatment” of a condition not intrinsically linked to the pregnancy itself.

A long-accepted principle of classic Catholic ethics is that of the “double effect,” essentially a guideline for when it is permissible to pursue an act that has as a result a good end when one also knows that it will have bad results. One example taught in ethics classes to demonstrate the principle of “double effect” is that of a pregnant woman with a cancerous womb. In that case, treatment of the cancer would foreseeably cause the death of the fetus, but would be permitted because the intent is to cure the cancer, not kill the child.

It is acceptable, said Redemptorist Fr. Brian Johnstone, because “saving the mother is not brought about by the death of the unborn child but by removal of the pathological organ.”

Standard moral theology would not agree with applying that reasoning to the Phoenix case, said Johnstone, a professor of moral theology at The Catholic University of America in Washington.

Without knowing all the details of the case -- and they may never be known because of privacy laws -- Johnstone said the difference in the Phoenix case is that it is not a diseased organ that is causing danger to the mother’s life, but the presence of the embryo in the mother’s womb.

“If you follow the standard theology, the only moral option you have is to not interfere. The woman would die and the fetus would die with her,” said Johnstone.

Not everyone would be willing to go along with the decision to do nothing and simply concede the death of mother and embryo as inevitable, said Johnstone. He finds (as do others in the current discussion) an alternative approach in the writing of noted theologian Germain Grisez, who teaches Christian ethics at Mount St. Mary College and Seminary in Emmetsburg, Md.

According to Johnstone, Grisez contends that in a case where the fetus is nonviable and there’s a real danger to the mother’s life if the fetus is not removed, “you could argue here that what is intended is the removal of the fetus from the womb, that the intention is not necessarily the death of the fetus.”

In that section of his work, detailed in the second volume, Living a Christian Life, of his three-volume The Way of the Lord Jesus, Grisez outlines four conditions essential in holding that “a baby’s death may be accepted to save the mother”:


“It would have to be a case -- to repeat -- where there is nothing you could do to save the life of the fetus,” said Johnstone. And while Grisez’s position would still represent a departure from what Johnstone considers a “standard theological view,” he notes that it is a view that has been published for a number of years and is widely known in theological circles; it has never been condemned; it “can’t just be dismissed as sophistry”; and it is a position that has reasonable arguments going for it.

As Cathy Kaveny, professor of law and theology at the University of Notre Dame in Indiana, writing on a Commonweal magazine blog, notes, the argument also has going for it Grisez’s reputation as a conservative voice among theologians. His thinking on this matter can’t be dismissed as that of a proportionalist or revisionist.

Johnstone said he would add one other consideration to the current case: “Is saving the life of the mother coherent with my basic intention to promote life? Yes. But am I doing something morally wrong to do that?”

He would answer “ ‘not necessarily’ because the death of the infant doesn’t enter into the moral framework because I can’t save it” even if it is not removed from the mother’s womb. Of course, as Johnstone also notes, no theologian’s opinion can nullify an episcopal decision.

Citing the church’s tolerance of killing in self defense, not because the attackers are villains but because there is no other way of avoiding attack, theologian Pat McCormick of Gonzaga University in Spokane, Wash., asks:

“What, then, are we to do in the case where the innocent life of a mother is gravely threatened by her own pregnancy, and where there is no way to save the life of the unborn child if the mother dies, and no way to save the life of the mother without terminating the pregnancy? The unborn child is clearly innocent of any moral wrongdoing, but so is the mother -- and her life is gravely threatened by an unprovoked attack. Does she have no duty or right to defend her life in this horribly tragic case? Do doctors have no obligation to save the one life they can save?

“There is no other case,” wrote McCormick in e-mail answers to questions, “in which official church teaching condemns killing in self-defense when the danger is life-threatening and unprovoked, and when there is no other way to address this danger.” In the case of ectopic pregnancy or uterine cancer, noted McCormick, an “indirect” abortion would have been permitted, “but the unborn child would have been just as assuredly killed in the process” as if it were a direct abortion.

“Can Sr. Margaret, the ethics committee and the unfortunate 27-year-old mother really be condemned in this tragic case simply because their action was ‘direct’?” asked McCormick.

He also wondered why the most severe penalty was employed, since the church “has not used this sanction to stem the scandal of priest pedophilia or oppose the use of torture or weapons of mass and indiscriminate destruction.” He described it as “troubling to many that this sanction seems to be reserved to offenses associated primarily with women and sexual ethics.”

“Catholic teaching has repeatedly recognized that when the universal principles of morality (and natural law) are applied to very concrete and difficult cases, things are not nearly as clear” as in the abstract. Catholic teaching, he said, instructs pastors to “enter into serious dialogue with those who dissent from official teachings. No one excommunicated Catholic politicians who dissent from Catholic teaching on capital punishment, nuclear weapons, torture, or the unjust invasion of Iraq. Why is dialogue appropriate in all these other cases, and excommunication the chosen path here?”

McCormick, who is teaching this summer in England, said Pope Paul VI “argued that Catholic moral teachings must be made clear and persuasive to intelligent persons and cannot be imposed by mere authority.” He sees Olmsted’s imposition of excommunication as no answer to a “serious pastoral problem” and “the troubling questions or genuine confusion raised by this case.”

[Tom Roberts is NCR editor at large. He can be reached at troberts@ncronline.org.]