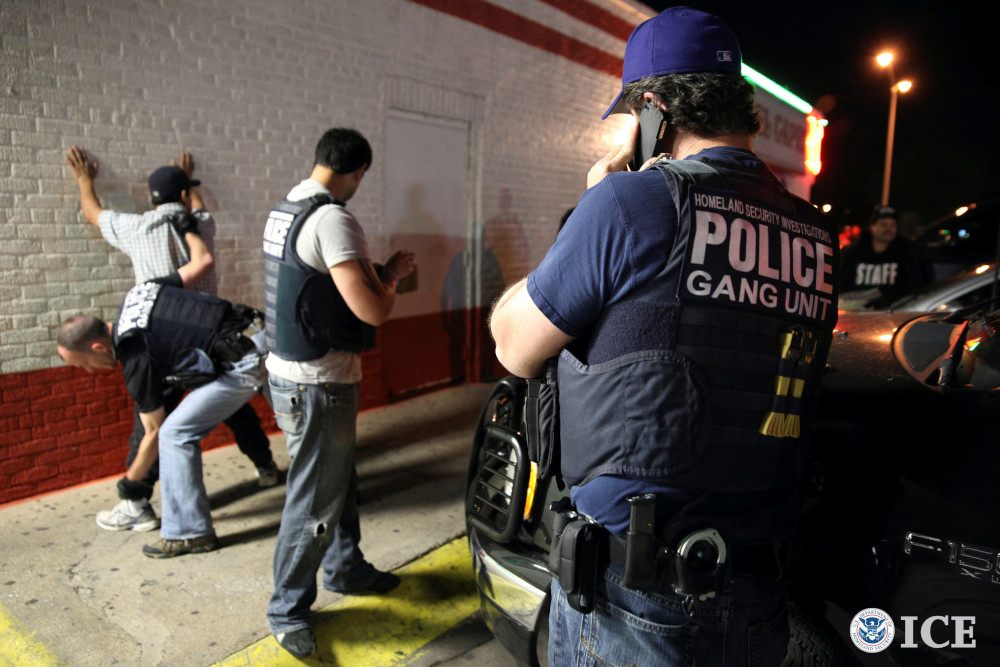 In this 2014 ICE handout photo, federal agents with the U.S. Immigration and Customs Enforcement in Dallas detain a suspected gang member. (CNS/Reuters/ICE/Charles Reed)

Many Catholic and other faith leaders noted that the Gospel reading for July 14 – the day U.S. Immigration and Customs Enforcement was to carry out deportation orders for some immigrants – was the parable of the good Samaritan from the Gospel of St. Luke.

The story admonishes people to put aside their differences and "help those who are in need of help," such as the immigrants coming across the U.S.-Mexico border seeking asylum, faith leaders said.

Among leaders criticizing the ICE actions was Dominican Sr. Donna Markham, president and CEO of Catholic Charities USA, who said July 13 that her organization strongly opposed "the reported plans of ICE raids this weekend."

"The threats of deportation and family separation are causing anxiety and fear within the vulnerable communities our agencies serve, endangering immigrant rights and safety. Most significant is the lasting psychological damage family separation inflicts upon children," she said. "Such cruel behavior will impact children for the rest of their lives."

"Our Catholic Charities agencies stand committed to providing legal and humanitarian assistance for our immigrant brothers and sisters," she said. "We support the pursuit of legal immigration but recognize that all immigrants, regardless of status, must be treated with basic human dignity and respect."

Markham urged Congress and the Trump administration "to enact comprehensive immigration reform and address the root causes of migration rather than pursue enforcement raids on America's immigrant community."

In Texas, Brownsville Bishop Daniel Flores called echoed the same concerns, saying: "The threat of mass deportation raids is psychologically cruel to families and children. The actual separation of parents from their children without even a chance for a court appearance is simply reprehensible. Laws ought to treat families and children differently than drug lords." 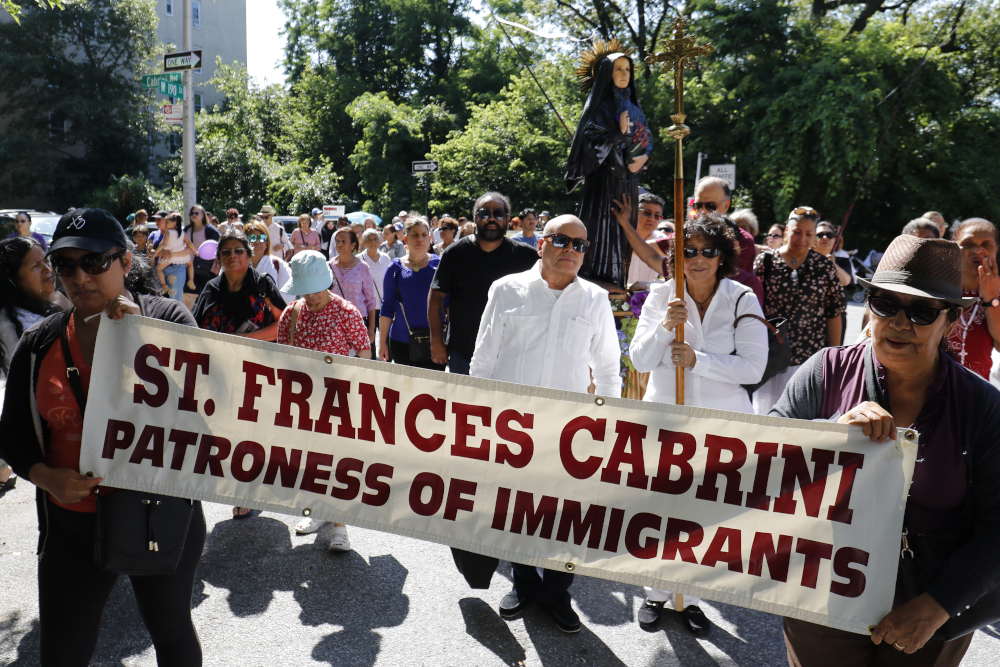 Mayors in those cities announced they would not allow their law enforcement agencies to cooperate with ICE agents. Thousands across the country protested the agency's actions.

In New York, Cardinal Timothy Dolan July 13 decried a general negative attitude toward refugees and immigrants that he said he sees among many in this country, a nation of immigrants. His remarks were not issued in direct response to the announced ICE deportations but came after he celebrated Mass that day in the chapel at the St. Francis Xavier Cabrini Shrine in New York City.

The saint, also called Mother Cabrini, is the patroness of immigrants and refugees. An Italian American, she founded the Missionary Sisters of the Sacred Heart of Jesus, a religious community that was a major support to the Italian immigrants to the United States.

"I was moved as I recalled her work among Italian immigrants in the United States in the 19th and early 20th century," Dolan wrote in a blog post. "This work inspires me today as the church continues to welcome immigrants from so many different countries, particularly in these troublingly uncertain times."

"It saddens me to admit that many, some even in the church, opposed Mother Cabrini's work. It troubles me that today in too many places hate and malice are directed against immigrants and refugees – in both words and actions," he added.

"As a pastor, I pray that understanding, respect and love might grow in dealing with newcomers to our land. I am proud of the welcoming that our parishes, schools, charitable, and health care ministries have and do provide," Dolan said.

In a July 14 interview on Fox News Channel, Matt Albence, acting ICE director, said "using the term 'raid does everybody a disservice. We are doing targeted enforcement actions against specific individuals who have had their day in immigration court and have been ordered removed by an immigration judge."

"We are merely executing those lawfully issued judges' orders," he said.

Albence said he could not give details of what the agency was calling "Operation Perspective," but said individuals ICE was targeting came "to this country illegally, had the opportunity to make an asylum claim before an immigration judge, and most of them chose not avail themselves of that opportunity and didn't even show up for their first hearing."

Albence added that in February, ICE gave these individuals an opportunity to turn themselves and arrange "processes for leaving the country." Just 3%, he said, "actually responded, the rest ignored (the request)."

"We've got compassionate, loyal ICE agents who are just doing their job," Cuccinelli said in a morning interview July 14 with CNN's Jake Tapper. "It shows you how far we've fallen in that it's become news that they would actually go deport people who have removal orders."

In other faith-based reaction, Katie Adams, domestic policy advocate for the United Church of Christ and co-chair of the Interfaith Immigration Coalition, said July 12 that having "these raids" take place on a Sunday, "the Christian holy day," is "further proof that these actions are morally bankrupt."

"These raids come from a place of fear, suspicion, and hate; living in that kind of hate is antithetical to the Gospel that teaches love for humanity. Families are sacred, both those we are born with and those we find," Adams said.

The National Council of Churches, also in a July 12 statement, urged the Trump administration to call off the ICE actions, which it labeled as "unconscionable and immoral."

"This is a moment in which God is calling the church to do all it can to stand with those who have sought refuge within our borders and to resist these measures and show compassion toward persons threatened with deportation," the council said.

Back in June, when the Trump administration indicated it planned enforcement operation in major cities to remove thousands of migrant families with deportation orders, the chairman of the U.S. bishops' migration committee criticized the decision, saying broad enforcement actions "instigate panic in our communities and will not serve as an effective deterrent to irregular migration."

“We recognize the right of nations to control their borders in a just and proportionate manner," said Bishop Joe Vasquez of Austin, Texas, in a June 22 statement. ICE deportations were later postponed.

"We should focus on the root causes in Central America that have compelled so many to leave their homes in search of safety and reform our immigration system with a view toward justice and the common good," he said, adding the U.S. bishops were ready to work with the administration and Congress to achieve comprehensive immigration reform.

"During this unsettling time, we offer our prayers and support to our brothers and sisters," Vasquez said, "regardless of their immigration status, and recognizing their inherent dignity as children of God."