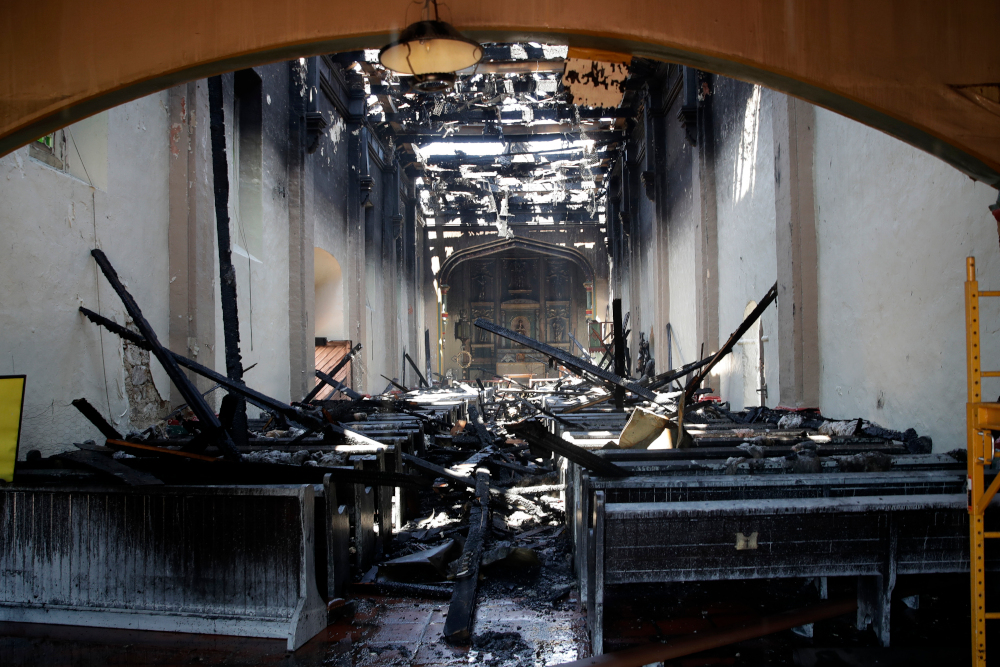 The interior of the San Gabriel Mission is damaged following a morning fire, Saturday, July 11, 2020, in San Gabriel, Calif. The fire destroyed the rooftop and most of the interior of the nearly 250-year-old California church that was undergoing renovation. (AP/Marcio Jose Sanchez)

A fire early July 11 destroyed the rooftop and most of the interior of a Catholic church in California that was undergoing renovation to mark its upcoming 250th anniversary celebration.

Fire alarms at the San Gabriel Mission rang around 4 a.m. When firefighters arrived, they saw smoke rising from the wooden rooftop in one corner of the historic structure, San Gabriel Fire Capt. Paul Negrete said.

Firefighters entered the church and tried to beat back the flames, but they had to retreat when roofing and other structural materials began to fall, Negrete said.

"We were trying to fight it from the inside. We weren't able to because it became unsafe," he said.

After evacuating the church, the crew was joined by up to 50 firefighters who tried to douse water on the 50-foot-high structure from ladder trucks, he said.

"The roof is completely gone," the captain said. "The fire traversed the wood rapidly. The interior is pretty much destroyed up into the altar area."

The cause of the fire was under investigation, Negrete said. He said the recent toppling of monuments to Junipero Serra, the founder of the California mission system who has long been a symbol of oppression among Indigenous activists, will be a factor in the investigation.

"This will be another box that they're going to check off," Negrete said.

Robert Barron, the auxiliary bishop of the Archdiocese of Los Angeles, tweeted that he was "deeply troubled" by the fire as he awaits further information about its cause.

The church was the fourth of a string of missions established across California by Serra during the era of Spanish colonization. The Franciscan priest has long been praised by the church for bringing Roman Catholicism to what is now the western United States, but critics highlight a darker side to his legacy. In converting Native Americans to Catholicism, they said he forced them to abandon their culture or face brutal punishment.

Depictions of Serra have been protested and vandalized over the years, and Pope Francis' decision in 2015 to elevate him to sainthood reopened old wounds. More recently, protests focusing on the rights and historical struggle of Black and Indigenous people led activists to topple statues of Serra in San Francisco, Sacramento and Los Angeles. 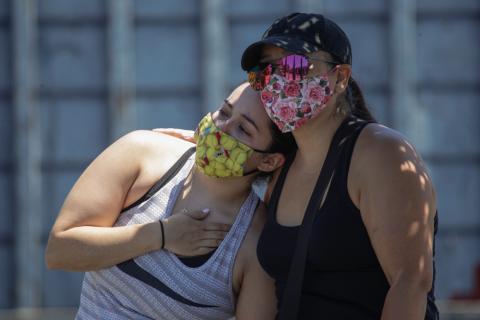 Selena Quezada, left, is hugged by her mother Cathy in the aftermath of a morning fire at the San Gabriel Mission, Saturday, July 11, 2020, in San Gabriel, Calif. The fire destroyed the rooftop and most of the interior of the nearly 250-year-old California church that was undergoing renovation. Selena, who went to grade school in the mission, was planning to wed there as well in 2021. (AP/Marcio Jose Sanchez)

Police increased patrol and officials stepped security around the mission's grounds about two weeks ago, she said.

The interior wall of the church was redone a week ago. Crews had just finished installing the pews as part of a larger renovation of the property to mark the anniversary of the founding of the mission in 1771, Huerta said.

The firefighters' aggressive stance and "a little bit of a miracle" kept the flames from reaching the altar, she said.

The church had been preparing to reopen next weekend following a four-month closure to slow the spread of the coronavirus.

Selena Quezada, 26, was in tears when she drove to the mission after she heard about the fire. She said she grew up in the parish and attended the elementary school on the church's grounds.

"I was baptized here, I had my first communion here ... I was getting ready to get married here next year so this hurts," Quezada said. "It's just really sad to see such a historic place burned down because this place means a lot to us."

The church, built of stone, brick and mortar, originally had a vaulted ceiling that was damaged by two earthquakes in the early 1800s, Huerta said. Franciscan fathers replaced the ceiling with a wood-paneled ceiling, and the roof was last repaired following damage caused by the 1994 Northridge earthquake, she said.