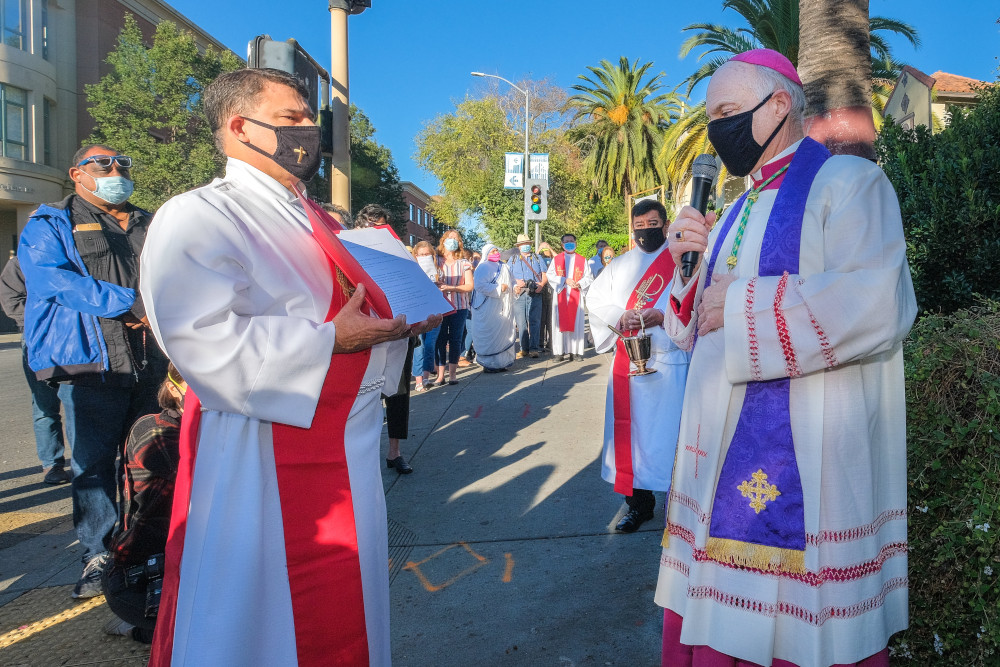 San Francisco's archbishop called a district attorney's decision to prosecute protesters arrested for toppling a St. Junipero Serra statue outside a Catholic church on charges of felony vandalism "a breakthrough moment for Catholics."

It is "the first time that any of the lawbreakers attacking statues of St. Junipero Serra and other acts of vandalism on Catholic Church property across California will be held accountable for their actions in a court of law," said San Francisco Archbishop Salvatore J. Cordelione in a statement Nov. 13.

The Serra statue outside Mission San Rafael in San Rafael was desecrated with red paint and toppled, leaving just the saint's feet in place.

The attack came on the federal holiday of Columbus Day, which is known as Indigenous People's Day in California and elsewhere. Protesters say the saint mistreated indigenous people in what is today California as a missionary, but Catholic leaders and historians dispute such claims.

"The crime was caught on video," the archbishop said. "The lawbreakers came prepared with ropes, chisels and spray paint, clearly indicating forethought in committing this crime. If crimes like these are not punished, then the government is telling mobs they get to decide what symbols Catholics and other faiths may display."

"Given that this was vandalism at a house of worship, the San Rafael Police Department understandably recommended that the perpetrators be charged with a hate crime," the archbishop continued. "Indeed, to vandalize a house of worship to express one's views is not a mere property crime: It is an attack on the identity and rights of a whole faith community."

On Oct. 17, Archbishop Cordileone led an exorcism at the site of the toppled statue to rid the area of evil. He was joined in prayer by a crowd of Catholic faithful.

On Oct. 26, the archbishop in a letter to Frugoli asked her to file felony charges against the perpetrators and prosecute them to "the full extent of the law."

He said he was writing on behalf of San Rafael's parishioners, the 80,000-plus Catholics in Marin County "and the entire Catholic community of the Archdiocese of San Francisco."

"In our view, this attack on a cherished religious symbol on our own church property is not a minor property crime, but an attack on Catholics as a people," Cordileone wrote.

"If the perpetrators of this crime are not brought to justice," he added, "small mobs will be able to decide what religious symbols all people of faith may display on their own property to further their faith, and they will continue to inflict considerable spiritual suffering on ordinary Catholic people who would see our sacred spaces as unprotected by law."

On Nov. 9, a group of protesters sat outside Frugoli's office in San Rafael to demand prosecution of those who toppled the Serra statue, ABC News reported.

In his Nov. 13 statement, Cordileone thanked the hundreds of San Francisco Catholics who signed a petition "supporting my call for prosecution of these offenders." The petition was launched the previous weekend by the Benedict XVI Institute.

"In a diverse society, we may debate and disagree about many things, including St. Junipero Serra's legacy. But mobs do not get to trespass on other people's holy grounds to destroy their sacred symbols," the archbishop said. "While a hate crime was not charged in this case, let us hope that this prosecution will nonetheless contribute to putting an end to attacks on all houses of worship."

Known for spreading the Gospel in the New World during the 18th century, Serra first arrived in Mexico from Spain. He made his way on foot up the coast of Mexico and to California, where he established a chain of missions that are now the names of well-known cities such as San Diego, San Francisco and Santa Barbara.

It is estimated that during his ministry, the Franciscan priest baptized about 6,000 native people.

But many Catholic leaders and historians have noted the crimes and abuse he is accused of happened long after his death. Serra, they say, respected the indigenous people, worked alongside them and protested crimes against them.

Fr. Luello Palacpac, pastor of San Rafael Parish and Mission, said in a statement the Serra statue vandalism was traumatic for parishioners and "caused my flock to enthusiastically support the archbishop's call to prosecute those who first desecrated and then toppled the statue of St. Junipero Serra," whom he called the first Latino-American saint.

"Whether you agree or disagree with the historic record of St. Junipero, no one has a right to trespass on a faith community's sacred grounds to destroy property and even more importantly the symbols of its faith," said Palapac.