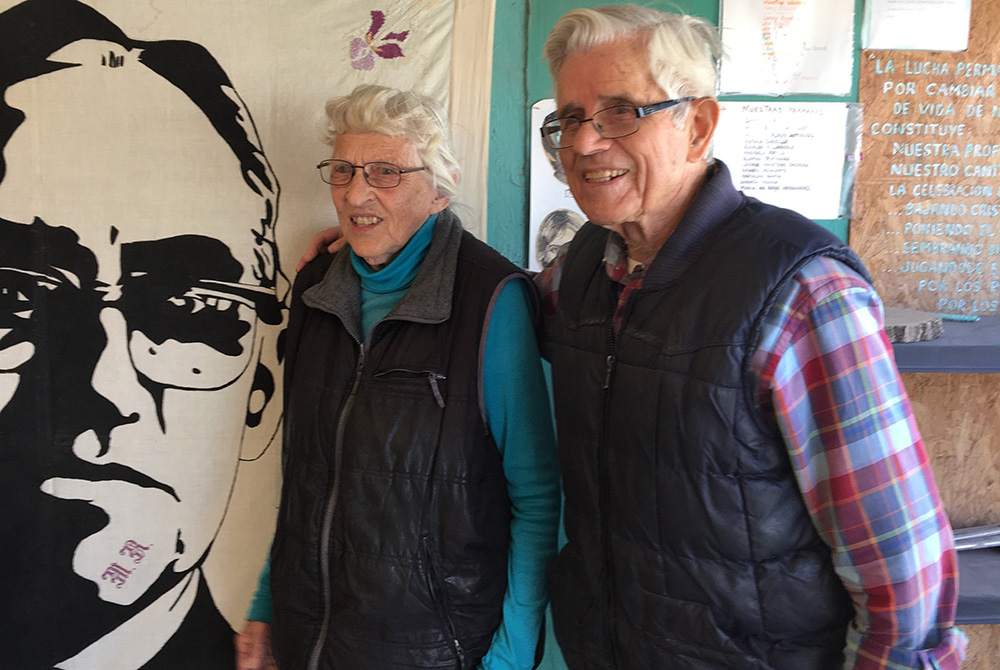 Mercy Sister Betty Campbell and Carmelite Fr. Peter Hinde pose next to an illustration of St. Oscar Romero in a 2019 photo in Ciudad Juarez, Mexico. Hinde died from complications due to COVID-19 Nov. 19, at the age of 97. (CNS/Julie Bourbon, courtesy of the Sisters of Mercy of the Americas)

He was a World War II fighter pilot based in Okinawa. Later he became a priest, spending six decades advocating for the poor and oppressed in Latin America.

Though Carmelite Fr. Peter Hinde was relatively unknown, journalist friend Gene Palumbo called him, along with his longtime associate Mercy Sr. Betty Campbell, "long-distance runners in their caring for the people of Latin America."

Hinde was born in 1923 Elyria, Ohio, and raised in Chicago. After two years in college studying engineering, he volunteered for the Army Air Corps in 1942.

His final battle was with COVID-19. He succumbed to it Nov. 19, 2020, in El Paso, Texas, just across the border from Ciudad Juarez, Mexico. He ministered there for 25 years among exploited factory workers and refugees from Central America.

On Aug. 12, 1945, three days after an atomic bomb destroyed Nagasaki, Hinde's squadron flew over the devastated city en route to a mission in South Korea. "For a brain-washed pilot at 15,000 feet, it was simply a casualty of war," he wrote in his private autobiography. 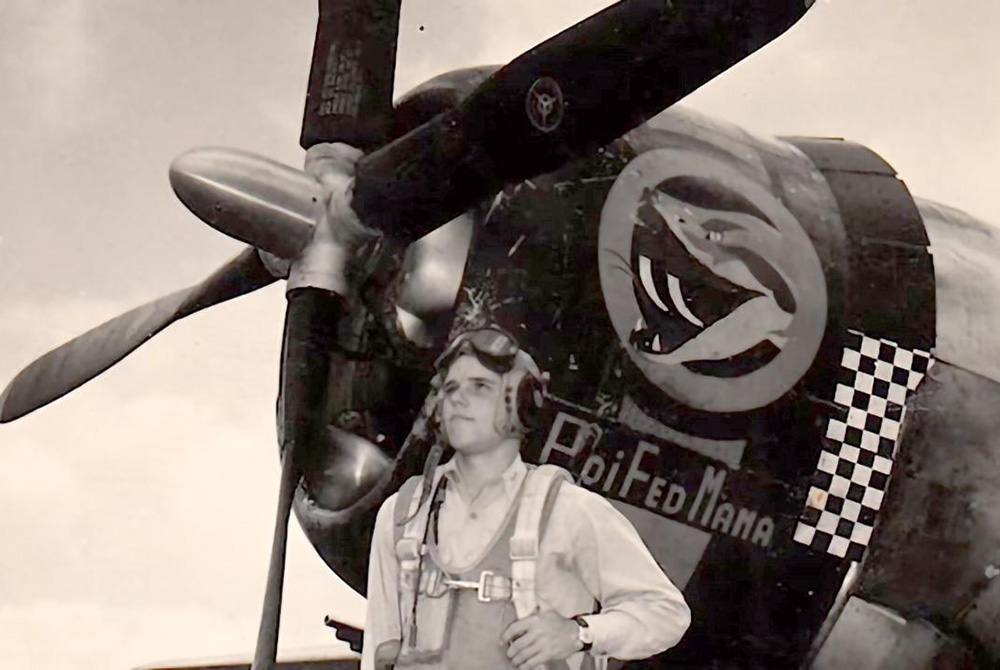 Hinde joined the Carmelites in 1946 and was ordained a priest in 1952.

Three years later he traveled to Rome to study theology. While on a stopover in Paris he met a Japanese Catholic priest, ironically a former fighter pilot cadet from Hiroshima.

The two decided to make a pilgrimage to the shrine of St. Therese of Lisieux. Hinde was stunned when the cleric told him he lost his family to the Hiroshima atomic bomb that exploded on Aug. 6, 1945, killing an estimated 140,000 people. They celebrated Mass there, he told documentary filmmaker Regis Tremblay. Hinde called the experience with the cleric "a process in my, you might say, 'demilitarization,' to some extent."

The next step took place when Hinde supervised Carmelite theology students at the Carmelite Theology House in Washington, D.C. They tutored Black students and participated in civil rights protests. In his autobiography, Hinde called the experience his "second novitiate."

"Someone told me about this radical friar in D.C. who was a friend of civil rights elder Stokely Carmichael," said Tom Quigley, a retired official of the United States Conference of Catholic Bishops. Hinde and Carmichael remained close friends until the latter's death in 1998.

Things got dicey in 1968 when the seminarians faced down National Guard troops sent to protect Alabama Gov. George Wallace, who was running for president.

"Tensions were building," Hinde recalled. Teachers were concerned that students involved in the civil rights struggle were falling behind in their studies. Hinde told the provincial, "The hall is like a tub filling up with water … to overflow. You know how you solve that problem? You pull the plug. I'm the plug. Send me to Peru."

Hinde began by organizing Indigenous catechists in the Secuani region of southern Peru, teaming up with Mercy Sr. Betty Campbell, a nurse. The collaboration would last 54 years, from 1966 until Hinde's death in 2020. 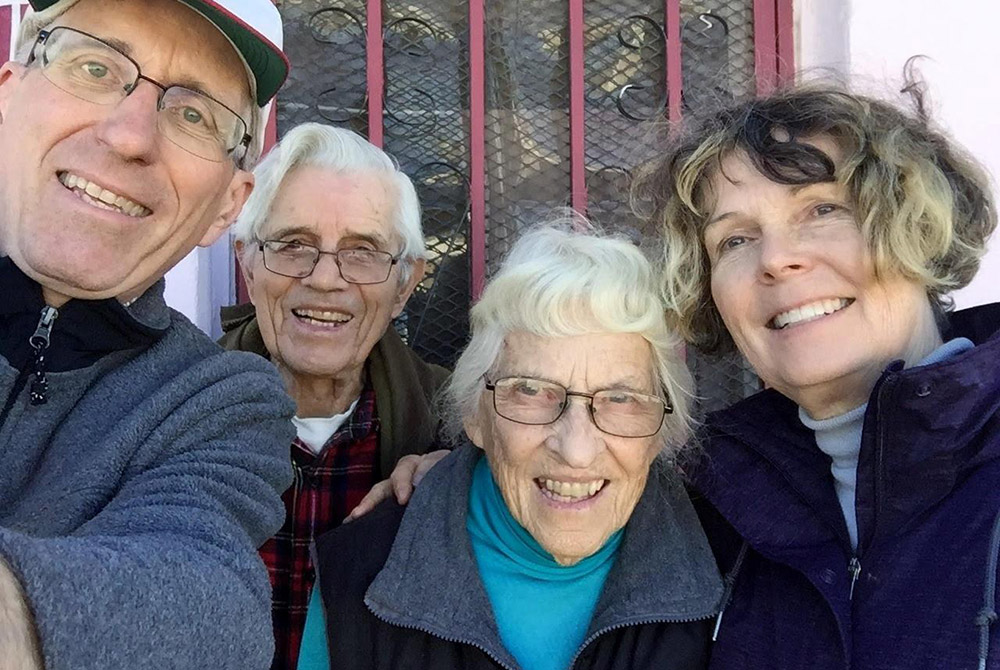 Campbell would go on to work at clinics and refugee camps in Nicaragua, Honduras, Costa Rica and El Salvador, sometimes under combat conditions.

In Peru, Hinde met frequently with a group of native and foreign-born priests searching for solutions to the poverty and marginalization of workers and campesinos (farmers).

Theologian Gustavo Gutiérrez urged the clerics to listen to the people, to accompany them, said Franciscan Fr. Joe Nangle in a telephone interview. "Gustavo Gutiérrez told them, 'You are not here to raise hell, but to do pastoral work,' " he said.

Gutiérrez believed that U.S development policies not only failed to curtail poverty, but increased it. He published his thoughts in a groundbreaking book, A Theology of Liberation. "That's the first time we heard that phrase," said Nangle. "Soon it would be popular throughout the region."

"There grew in us the conviction that the Americas are gradually becoming a concentration camp," they wrote. "People were crowded into scarce space with scarce resources."

"Pope John Paul couldn't understand how the church could be persecuted in Christian nations," said Nangle. "His message to the bishops was, 'Get your priests in line!' "

The persecution of church personnel continued throughout the region. NCR correspondent Penny Lernoux chronicled it in her book, Cry of the People.

El Salvador, aided by millions of dollars in U.S. military aid, became an epicenter of human rights violations. In March 1980, Archbishop Óscar Romero was shot to death while saying Mass. (Pope Francis canonized him as a saint on Oct, 14, 2018.)

"Peter and Betty were close friends of these women," said fellow activist Scott Wright, who worked with the missionaries since the 1970s. "They believed that martyrs had a special claim on our lives."

In 1989, the Salvadoran military murdered six Jesuit priests,* a housekeeper and her daughter, accusing them of subversive activities.

In 1985, Hinde co-founded Christians for Peace in El Salvador (CRISPAZ). "The CRISPAZ organization tried to educate people by having them experience the people in Central America and hear the stories about [Archbishop] Romero and the four women, etc.," Hinde told Tremblay. "[It was] to evangelize North Americans on the basis of the suffering of the people of Latin America."

Scores of CRISPAZ delegations visited El Salvador to gather information to be share with friends and churches stateside.

As part of their policy of "reverse mission," Hinde and Campbell established Tabor House in Washington, D.C., as a residence for returning missioners and exiles from Latin America.

They took in poor families, shared household chores and participated in weekly human rights protests. "We invaded the White House and the International Monetary Fund," wrote Hinde in his autobiography. "We were arrested and put on trial to protest U.S. policies in Latin America."

"Casa Tabor" was relocated to San Antonio, Texas, in 1984 and eventually to Ciudad Juarez, adjacent to El Paso, Texas, in 1995. Volunteers helped fix up an abandoned house. Campbell planted a garden and plastered the walls with photos and names of murder victims: priests, journalists and more than 20,000 victims of the city's dirty war.

Just a few days before Peter Hinde died in an El Paso hospice, he and Campbell received a CRISPAZ peace award at a virtual ceremony for their three decades of service to El Salvador.

With Hinde's passing, co-workers described his character and personality.

"He was a very human guy," said former Carmelite Desmond Kelleher, reached by phone in Ireland. "He had an analytic mind, but also a great sense of humor. He was a good listener."

Fr. Carl Markelz, Hinde's Carmelite provincial superior, also spoke by telephone from Washington: "Peter had two pillars in his life: activism and prayer. He was a true contemplative prophet. He brings to mind Pope Francis' statement — that 'the pastor has to smell like the sheep.' That was Peter."

Quigley, former official for the U.S. bishops, responded by email: "Peter was one of the truly greats -- a perpetual smile, indefatigable, gentle. San Pedro de las Américas, ruega por nosotros! (St. Peter of the Americas, pray for us!)"

Betty Campbell also responded by email: "Peter was a prophet, sharp, intelligent, always searching for the truth, speaking the truth to the best of his ability. He was a very humble person. He lived poorly. Just before passing he called Elijah to come with his chariot of fire and take him to God."

*This story has been updated to correct that six Jesuits were murdered in 1989.