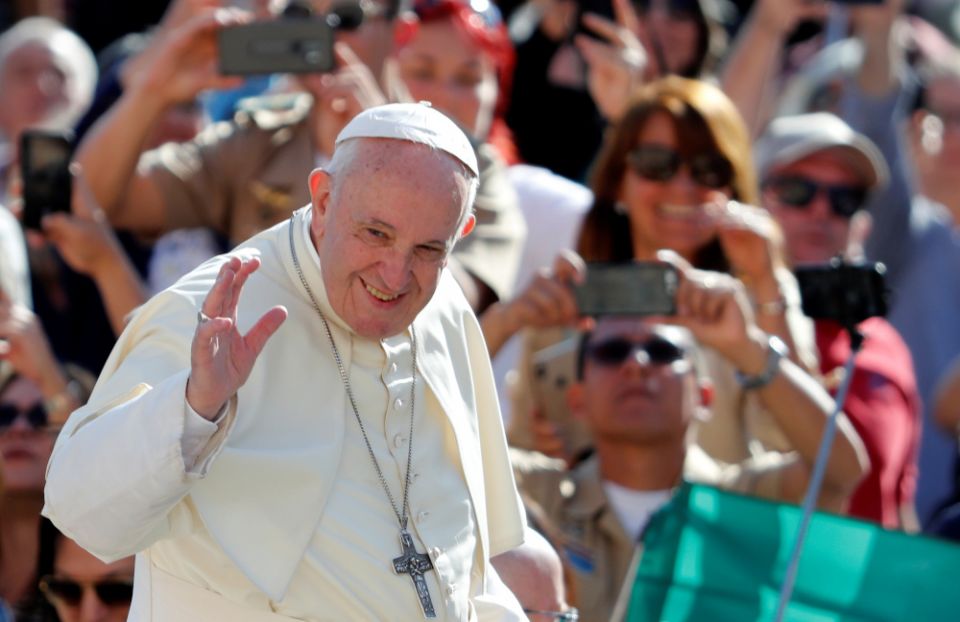 Pope Francis greets the crowd he arrives for his general audience in St. Peter's Square at the Vatican Sept. 11, 2019. (CNS photo/Reuters/Remo Casilli)

Vatican City — Having gone to Africa as a pilgrim of peace and hope, Pope Francis said he hoped the seeds planted there by his visit would bear abundant fruit for everyone.

Following in the footsteps of evangelizing saints before him, the pope said he sought to bring with him "the leaven of Christ" and his Gospel, which is "the most powerful leaven of fraternity, justice and peace for all people."

Speaking to some 12,000 people gathered in St. Peter's Square Sept. 11, the pope recalled his fourth apostolic journey to Africa. He dedicated his general audience talk to a review of some of the highlights from his visit to Mozambique, Madagascar and Mauritius Sept. 4-10.

The pope said he wanted to "sow the seeds of hope, peace and reconciliation" in Mozambique, which had experienced two devastating cyclones recently and 15 years of civil war.

While the church continues to guide the nation along the path of peace, the pope made special mention of the Rome-based Community of Sant'Egidio, which had facilitated the mediation process that resulted in the nation's 1992 peace agreement.

Speaking off-the-cuff, the pope said, "I would like to take a moment to thank" the lay community for their hard work in this peace process.

He said he also encouraged Mozambique's leaders to keep working together for the common good, and he noted how he saw that kind of cooperation in action at a hospital he visited that helps people, especially mothers and children, with HIV and AIDS.

"I saw that the patients were the most important thing" at the Sant'Egidio-run center, which was staffed by people of different religious beliefs, including the director of the hospital, who was Muslim, he said.

Everyone worked together, "united, like brothers and sisters," he said.

Reflecting on Madagascar, the pope noted how beautiful and rich in natural resources the country is, but that it is still marked by tremendous poverty.

He said he asked that the people there would be inspired by their "traditional spirit of solidarity" in order to overcome the obstacles they face and foster development that respect both the environment and social justice.

In fact, "one cannot build a city worthy of human dignity without faith and prayer," he said when he spoke to contemplative religious women.

Francis said he wanted to visit Mauritius because it has become "a place of integration between different ethnicities and cultures."

Not only was interreligious dialogue well-established there, he said, there were strong bonds of friendship among the leaders of different religions.

"It would seem strange to us, but they have this friendship that is so natural," he said, explaining how touched he was to find a large bouquet of flowers sent to him by the grand imam "as a sign of fraternity."

He said he encouraged government leaders to stay committed to fostering harmony and to protecting democracy.

In his audience talk, the pope also explained why — before and after every trip — he always visits Rome's Basilica of St. Mary Major to pray before the basilica's Marian icon "Salus Populi Romani" (health of the Roman people).

He said he prays that she "accompany me on the trip, like a mother, tell me what I must do" and help "safeguard" everything he says and does.

Ordaining new priests, pope asks them to be merciful