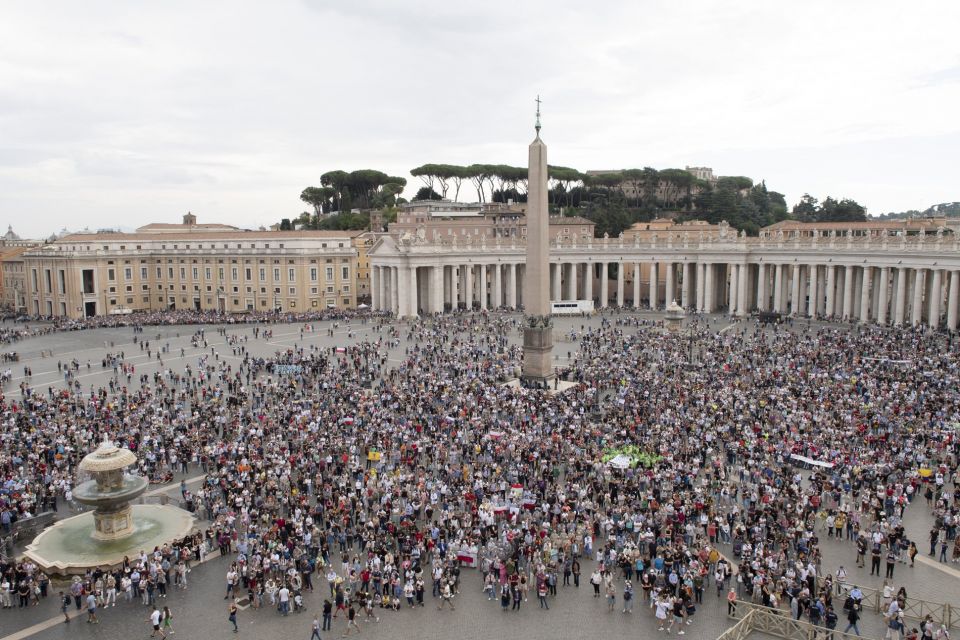 People attend the Angelus led by Pope Francis from the window of his studio overlooking St. Peter's Square at the Vatican Oct. 4, 2021. (CNS photo/Vatican Media)

Vatican City — When Christians recognize their own weakness and frailty, they discover God's love and care for them, Pope Francis said.

Speaking to pilgrims gathered in St. Peter's Square for his Sunday Angelus address Oct. 3, the pope said that "the awareness of being little, the awareness of the need of salvation is indispensable for receiving the Lord. It is the first step in opening ourselves up to him."

"In prosperity, in well-being, we have the illusion of being self-sufficient, that we are enough, that we do not need God," he said. "Brothers and sisters, this is a deception, because each one of us is a person in need, a little one. We must seek out our smallness and recognize it. And there, we will find Jesus."

After praying the Angelus prayer, the pope expressed his sadness after a deadly prison riot stirred up by rival gangs at the Litoral penitentiary in Guayaquil, Ecuador, left 118 dead and dozens wounded.

"I pray for them and for their families," the pope said. "May God help us heal the wounds of crime that enslave the poorest. And may he help those who work every day to make prison life more humane."

In his main address, the pope reflected on the day's Gospel reading in which Jesus, after being put to the test by the Pharisees, became indignant after the disciples rebuked people who were bringing their children to him.

Jesus, the pope noted, "is not angry with those who argue with him, but with those who, in order to relieve him of his burden, make the children go away from him."

"Those who seek God find him there, in the little ones, in those in need," he said. "This is the reason why Jesus gets angry: any affront to a little one, a poor person, a child, a defenseless person, is done to him."

Pope Francis said that contrary to popular belief, to recognize "one's littleness is a starting point for becoming great" and a way to discover "the true meaning of life."

"When we feel small in the face of a problem, small in front of a cross, an illness, when we experience fatigue and loneliness, let us not get discouraged," he said. "The mask of superficiality is falling and our radical weakness is reemerging: it is our common ground, our treasure, because with God, weakness is not an obstacle but an opportunity."

Before leading pilgrims in praying the Angelus, the pope said that God always draws closer to those who recognize their limitations and frailty, "like a father with his child."

"This is how we become great: not in the illusory pretense of our self-sufficiency — this makes no one great — but in the strength of placing all our hope in the father, just like the little ones do, they do this."