by Joseph Kolb, Catholic News Service
This article appears in the Immigration and the Church feature series. View the full series. 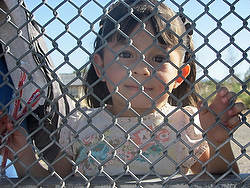 A young girl smiles after receiving candy Oct. 14 from two nuns at the fence that separates New Mexico and the outskirts of Ciudad Juarez, Mexico. (CNS photo/Joseph Kolb) (Oct. 19, 2011)

SUNLAND PARK, N.M. -- The compact car lifted a trail of dust as it traveled slowly along the 18-foot-tall chain-link fence, attracting the attention of the U.S. Border Patrol agent sitting in his green and white SUV.

When the vehicle stopped and two women got out, he was concerned contraband might be tossed over the fence into the United States to the waiting vehicle. Instead, the women began throwing items into Mexico.

The two women were Franciscan Missionaries of Mary who come to the fence periodically and toss whatever they can get to give the needy families of Puerto de Anapra, one of the poorest and most violent suburbs of Ciudad Juarez.

"The agent said it was OK for us to be here, but only for a short time," said the older nun, who identified herself as Sister Marie. Her companion on the goodwill venture into this remote area of the fence -- where Texas, New Mexico and Mexico converge -- was Sister Karen. Both sisters requested their last names not be disclosed.

"It's sad, they are so poor," said Sister Marie. "It breaks my heart see them have to live like this and how they live in such fear."

The presence of the sisters attracted nearly 20 people, who rushed down dirty, garbage-strewn alleys to make it to the fence to receive their gifts.

As the children pressed their faces against the tight fence, Sister Karen pushed the licorice through the narrow spaces to the tiny fingers of the children. The small spaces make it much more difficult for migrants to get a good footing to cross into the United States.

"Hey, how many do you have there, make sure you share," Sister Marie said to a boy about 12, as she kept a close watch to ensure everyone who showed up to the fence got something,

The boy looked at Sister Marie and knew the fence allowed him to ignore her request, but he looked at the crowd for another child that did not have a piece of the candy and relinquished his extra.

Sister Marie began these periodic jaunts to the border fence five years ago, after attending the annual Border Mass held in early November and celebrated with congregants facing each other while divided by the fence.

"The people would come to the fence and tell us they desperately needed things," Sister Marie said.

The "things" were not specified but the abject poverty the Anapra residents live in is evident. Sister Marie, and whoever would help her, would pile pre-worn clothes, shoes, toys and blankets into her car and drive to the fence.

"When we got there people would just show up, and we would throw the items over the fence," Sister Marie said. "It's so sad, these people live in shacks, they have nothing."

According to the Border Patrol agents who kept a close watch on the group, what the sisters do is very dangerous. One agent who declined to give his name -- very few people agree to provide their full name at the border -- said this area has seen an increase in violence not only against the people in Mexico but against Border Patrol agents. He pointed to his patrol vehicle, which had grates and fencing on all of the windows.

"They throw rocks at us all the time and just recently began throwing cats and dogs over the fence at our vehicles," said the agent.

One woman who brought her children to meet the sisters was Brenda Alicia, 31. She pointed to her home next to the border fence, adjacent to a wall with gang graffiti on it. Brenda Alicia said she has three children, 13 and 12 years old and 3 months. The two older children were at her side, chewing on newly acquired red licorice.

"I like when the sisters come, we need so much here, especially now that it's getting cold," Brenda Alicia said.

The poverty the people in Puerto de Anapra suffer is only a short drive from a large casino, horse race track and amusement park in Sunland Park, N.M. -- amenities Brenda Alicia and her children are oblivious to, given their circumstances.

"It's getting worse here, there are more killings," Brenda Alicia said.

She said she is fearful that her older son may be enticed to get involved with the gangs because of the easy money.

Sisters Marie and Karen know the danger they face when they come to this remote area of the border.

Their missions are conducted under the watchful eye of Border Patrol agents, who give the nuns their tacit but reluctant approval.

With the trunk of her car now empty, Sister Marie, with the aid of Sister Karen, began handing out pastel-colored rosaries, accepted as eagerly as the licorice. As that supply dwindled, a burly Border Patrol agent approached the sisters.

"Sister we have some bandit activity on their side further up the fence, and we don't want them to come and take the things away from the people," said the agent.

Often, youth gangs beat the group and take the items the sisters had just given them.

The Border Patrol agent walked off, allowing the sisters to say their goodbyes to the group, but returned within a minute with greater urgency after receiving another radio call.

"Sisters you need to leave now because they are throwing rocks at our agents and we don't want you getting struck."

"We'd better go now, thank you and God bless you," Sister Marie said to the agent, giving him a hearty handshake.

New book on immigration and children