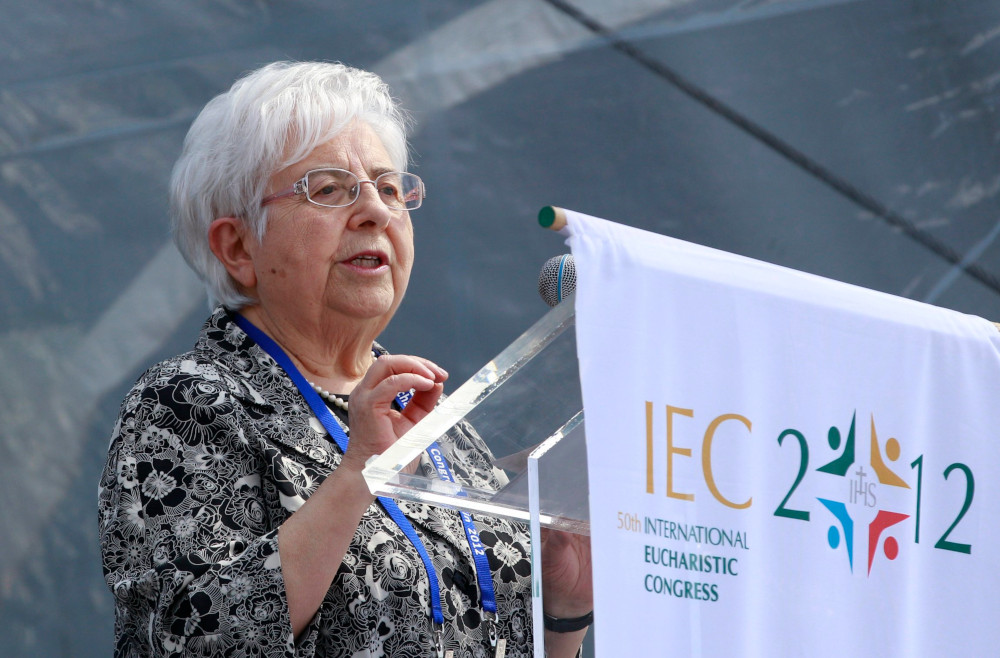 Maria Voce, leader of the Focolare Movement, is pictured in a file photo. Voce has accepted the resignations of the lay movement's top leaders in France and announced the group will ask an independent committee to investigate how allegations of the sexual abuse of minors have been handled. (CNS/Paul Haring)

Editor's Note: This story has been updated. The Focolare movement said Oct. 23 that their statement in English on the resignation of the lay movement's top leaders in France mistakenly identified the victim as female. The error has been corrected.

The president of Focolare has accepted the resignations of the lay movement's top leaders in France and announced the group will ask an independent committee to investigate how allegations of the sexual abuse of minors have been handled.

"The task of this body will be to listen to the presumed victims and to gather further testimonies, as well as investigating eventual omissions, cover-ups or silence on the part of those responsible for the movement," said a statement released Oct. 22 by the Focolare movement, which is headquartered outside of Rome.

"In the interest of the completeness of the investigation and to guarantee full transparency," the statement said, Maria Voce, president of Focolare, accepted the resignations Oct. 21 of Bernard Brechet and Claude Goffinet, co-leaders of the Focolare movement in France, and of Henri-Louis Roche, leader of the movement's Western Europe region.

In 2016, the Focolare movement dismissed a consecrated member of the group, identified only as JMM.

A young man had alleged in 1994 that JMM had raped and sexually molested him in 1981 and 1982 when he was 15 and 16. The Focolare movement said they relieved JMM of his "responsibilities regarding young people" when the allegations were made.

"At the request of those responsible for the movement, JMM followed a psychotherapeutic path for a number of years," the statement said, although he remained a member of Focolare. He was dismissed only after the victim again contacted the movement in France and the French bishops' conference, which referred the case to the then-Pontifical Council for the Laity at the Vatican.

By then, the Focolare movement had set up a Central Commission for the Promotion of the Well-Being and Protection of Minors, which recommended JMM's dismissal.

But in November 2019, the movement said, the French independent Commission on Sexual Abuse in the Church was informed that there were other presumed victims of JMM. The Focolare's protection commission reopened the file on JMM "to contact the victims already identified, to gather their testimony and give each of them full recognition," the statement said.

At the request of one of the victims, in September a meeting was held in France with the survivors, the leader of the Focolare protection commission and Jesus Moran, co-president of the international movement.

"On that occasion, Jesus Moran expressed his pain and shame for the abuse suffered and also for 'the silence or lack of initiative sustained for years on the part of various people in positions of responsibility,'" the statement said.