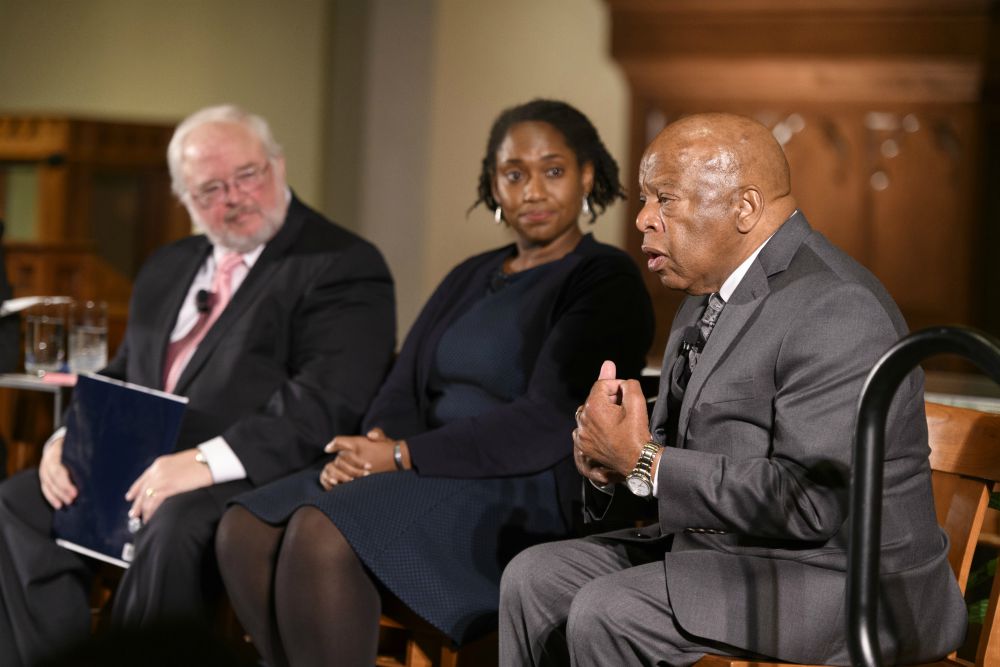 A powerful panel of speakers addressed a capacity crowd at Georgetown University's Dahlgren Chapel Nov. 13 on the pernicious sin of racism and the church's role in both perpetuating and combating it. They met some 40 miles from Baltimore, where the U.S. Conference of Catholic Bishops was holding its fall gathering, tackling, in part, the same subject.

"Racism is an enduring and persistent problem that calls for our enduring response," said John J. DeGioia, Georgetown president, in his welcoming remarks. He also called to mind the legacy of Cardinal Patrick O'Boyle, who gave the invocation at the 1963 March on Washington and steadfastly supported civil rights. O'Boyle's name and words would be invoked several times during the evening.

Speakers included Marcia Chatelain, associate professor of history and African-American studies at Georgetown; Archbishop Wilton Gregory of Atlanta, who was also participating in the bishops meeting; Jim Wallis, president of Sojourners; and U.S. Rep. John Lewis (D-Georgia), who was the youngest speaker at the March on Washington and is now, at 77, the only one still living.

Lewis arrived late, from another engagement, and was greeted with a standing ovation. John Carr — director of the Initiative on Catholic Social Thought and Public Life, one of the event's sponsors, along with the Office of Mission and Ministry — dove right in, asking Lewis, "How do we build the beloved community that you and Dr. [Martin Luther] King talked about?"

In a voice of quiet authority, that stilled those gathered and had them leaning forward in their seats to catch every word, Lewis said, "Sometimes I feel like we've lost our way," adding, in a reference to King's Letter from a Birmingham Jail, "The church should be a headlight not a taillight."

"We have to give our people the sense of hope and faith, tell them not get lost in a sea of despair," he said. In what would be a theme of his remarks for the evening, he added, "The way of love is a much better way. Just love everybody. You may get arrested and go to jail, you may get beaten and bloody. But you're making a down payment on building the beloved community."

The choice of Georgetown as a setting for a conversation on racism was particularly apt, the speakers acknowledged, because the university has itself only recently begun to grapple with its role in perpetuating the institution of slavery. In 1838, the Jesuits sold 272 men, women and children to help pay off some of the college's debts. 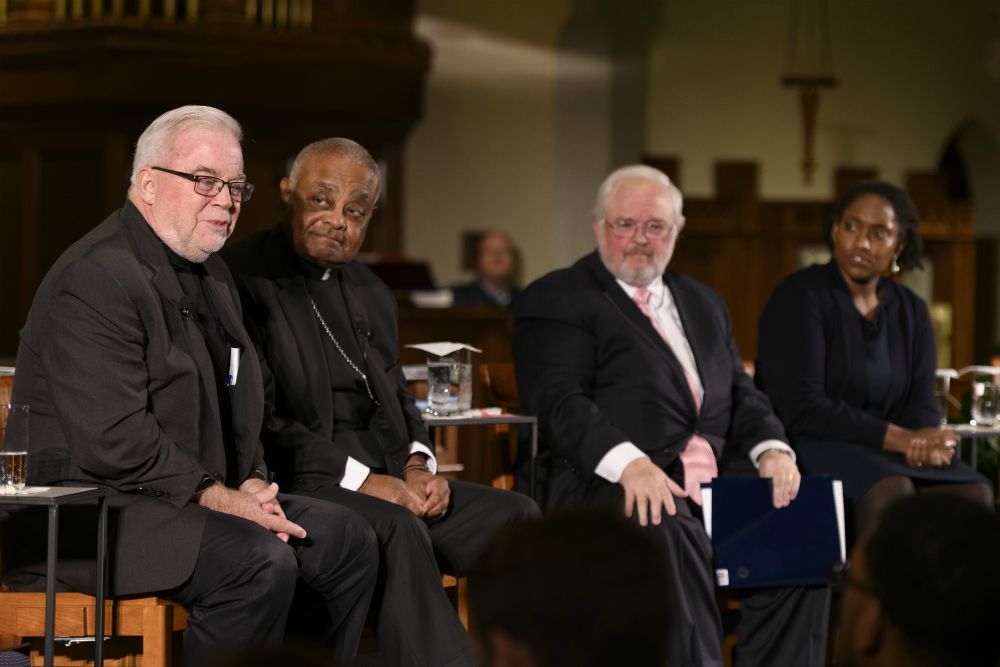 Chatelain, a member of Georgetown's Working Group on Slavery, Memory and Reconciliation, spoke of the "false idolatry" of the Confederate flag and statues, as well as buildings named for those indelibly associated with the sin of racism.

Part of Georgetown's response has been to rename two buildings whose original monikers were tied to slavery. One is now called Isaac Hall, for the first name that appeared on the slaves' bill of sale. Another is now Anne Marie Becraft Hall, in honor of a free woman of color who founded a school for black girls in 1827 and later became an Oblate Sister of Providence in Baltimore.

"If we imagine all institutions as being predicated on a sacrifice of human life and human dignity," Chatelain said, "perhaps we would have a different relationship to our institutions and each other."

Wallis praised the choice of a chapel for this conversation.

The church's response to people who identify as LGBT was addressed during the question-and-answer period at the end of the evening, with Gregory saying that not enough has been done and calling for "bridge building." He also expressed concerns about bigotry "against our Islamic brothers and sisters."

"The issue of racism is at its core a spiritual difficulty. It is a spiritual moment, and like any spiritual moment, it calls us to conversion," said Gregory, noting that achievements of milestones, such as electing the first African-American president, can easily be confused with such genuine conversion, ultimately leading to disappointment when real change seems to remain just out of our grasp. But, he urged, "Don't lose hope."

Gregory and his fellow bishops, including Bishop George Murry of Youngstown, Ohio, who heads the bishops' Ad Hoc Committee Against Racism, tackled this thorny issue at their meeting. There, as they debated the best course to take in confronting what has too often been the church's silence on the matter, Gregory said, "Racism isn't going to be conquered by speech but by actions."

The ad hoc committee said it would focus its efforts on evangelization, with the goal of healing, reconciliation, and conversion.

At Georgetown, the undercurrent of hope emanated most strongly from Lewis, who returned again and again to his theme of love — for the nuns who treated him after he was badly beaten on a bridge in Selma, for his brothers and sisters in Congress with whom he often does not see eye to eye.

Asked their dos and don'ts of confronting racism, Lewis, said, "Do love. Love. Love. It's so strong, it's so powerful. That connection, that spark of the divine is in all of us.

He then added, again quoting King, "Don't hate. Hate is too heavy a burden to bear. It will destroy you."