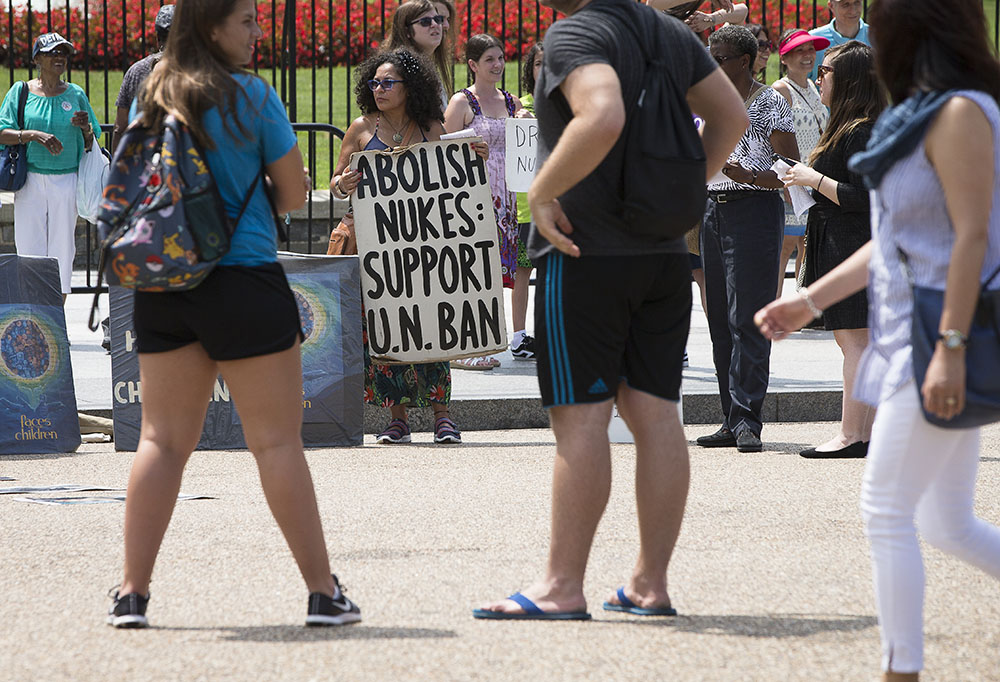 Unprecedented global challenges set the context for incoming President-elect Joe Biden's move into the Oval Office, making his decisions about U.S. foreign policy and national security more critically important than ever. At the same time, the crises he inherits present his administration with a rare opportunity to contribute in substantial ways to a "new post-pandemic normal" toward which Pope Francis has been incessantly directing our attention.

As Biden launches his administration's approach to international relations and very serious security challenges, he would do well to draw deeply upon the values of Catholic social teaching and to absorb the insights of Pope Francis, starting with "Laudato Si', on Care for Our Common Home," Fratelli Tutti and the proposals of the Vatican's COVID-19 Commission.

Biden has already indicated his intention to take some action on the global stage that would be consistent with Catholic social teaching. One example is his emphasis on diplomacy as the United States' principal tool of foreign policy and his plan to rejoin several extremely important multilateral or bilateral agreements. He has promised to support an extension of the New START Treaty, the only remaining Russia-U.S. bilateral agreement that limits strategic nuclear arsenals, which is slated to expire Feb. 5. Biden also intends to reenter the Paris Climate Agreement; revoke the U.S. pullout from the World Health Organization; and rejoin the Joint Comprehensive Plan of Action (Iran Deal).

Each of these suggests a commitment to the global common good through multilateral cooperation, but the new administration's multilateralism must be deep, sustained and indicative of a positive U.S. engagement with the family of nations. This should include strong support for democratization of the United Nations itself and for U.N. leadership in response to a multitude of global security challenges, such as contagious diseases (including COVID-19), the climate crisis, cybersecurity, persistent poverty, food insecurity, human rights, just peace and disarmament.

Two central pillars of U.S. foreign policy with which Biden will have to engage are deeply challenged by Catholic social teaching as articulated by Francis. The first includes the size of the U.S. military budget; a narrow understanding of national security as inextricably tied to military might; and the militarization of the U.S. economy, particularly through the massive production and worldwide marketing of weapons.

Francis has repeatedly decried the complex reality of "a true world war fought piecemeal" and the devastating impact of building international relationships on threats of violence and preparations for war. In his 2017 World Day of Peace message, he wrote:

Violence is not the cure for our broken world. Countering violence with violence leads at best to forced migrations and enormous suffering, because vast amounts of resources are diverted to military ends and away from the everyday needs of young people, families experiencing hardship, the elderly, the infirm and the great majority of people in our world. At worst, it can lead to the death, physical and spiritual, of many people, if not of all.

Immediate steps by Biden that can lead the United States away from this "war fought piecemeal" would be to support a repeal of the 2001 and 2002 Authorizations for the Use of Military Force that have been used to justify the ever-expanding U.S. "war on terror"; to end U.S. participation in the devastating Saudi/United Arab Emirates-led war in Yemen and restore vital humanitarian aid to that country; and to stop the U.S. ongoing drone wars in Afghanistan, Iraq, Somalia, Syria and Pakistan. 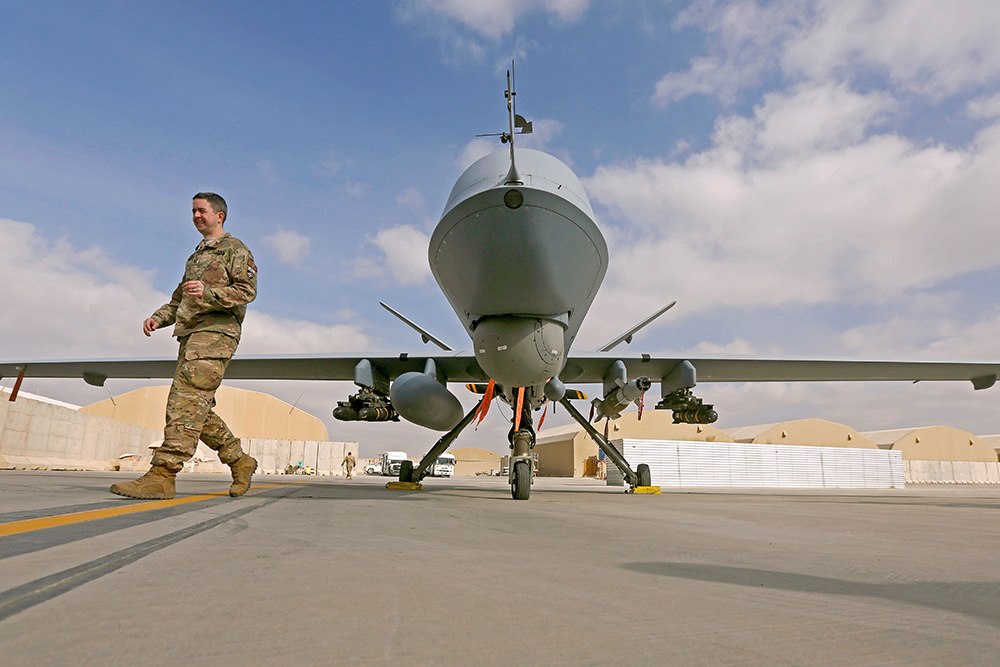 A U.S. service member passes in front of an MQ-9 Reaper drone at the Kandahar air base in Afghanistan. (CNS/Reuters/Omar Sobhani)

Furthermore, he should reprioritize diplomacy with Iran and end sanctions that harm Iranian civilians; promote respect for human rights, including an absolute ban on torture; and promote U.S. support for the rule of international law in domestic policies and international relationships, especially in our relationships with Israel and Saudi Arabia.

The Biden administration should support Francis' call in the 2021 World Day of Peace message for the establishment of a global fund to meet urgent humanitarian needs by decreasing military expenditures and realigning U.S. foreign policy to prioritize the development, coordination and funding of nonviolent peacebuilding strategies that would enable the U.S. to build principled but less adversarial relationships with other nations, including China, Russia and North Korea.

If sufficiently developed over time, these nonviolent strategies could interrupt or prevent multiple expressions of violence, protect vulnerable people and communities and tackle dangerous disinformation, weaponized corruption and cyberthreats.

Another deep challenge from Francis that points directly at a second, apparently unassailable, pillar in U.S. foreign policy is his rejection of deterrence as a morally acceptable justification for the possession of nuclear weapons. In November 2017 during a Vatican conference on nuclear disarmament, Francis said about nuclear weapons, "The threat of their use, as well as their very possession, is to be firmly condemned." 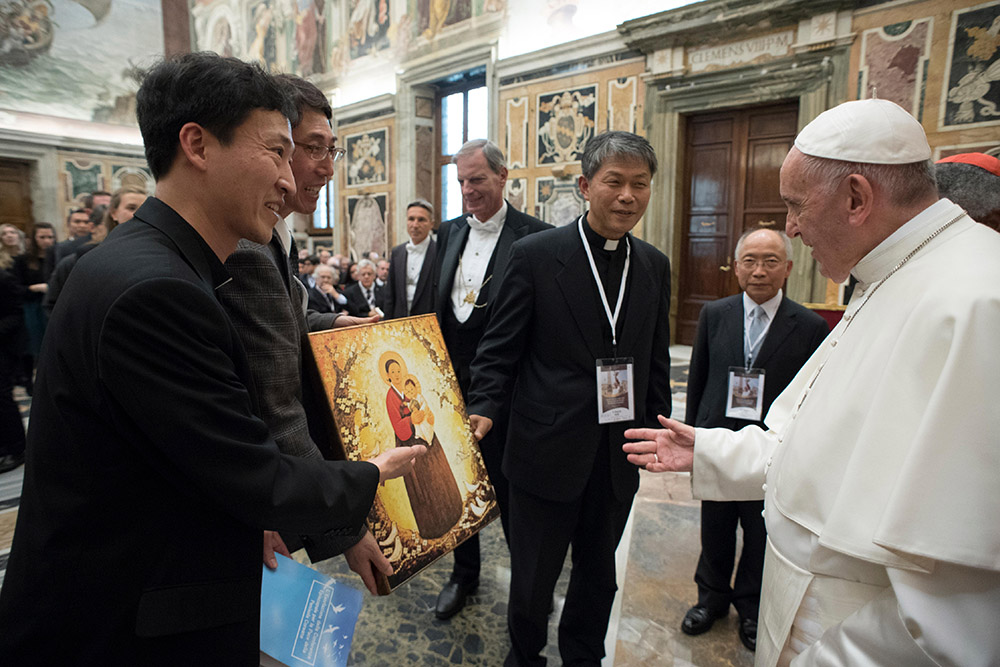 Pope Francis accepts a gift of a Marian icon as he meets people attending a conference on building a world free of nuclear weapons, at the Vatican Nov. 10, 2017. (CNS/L'Osservatore Romano)

He also should fully engage the United States in serious negotiations to reduce the nuclear threat and move deliberately toward the elimination of nuclear weapons by fulfilling in good faith the U.S. disarmament obligations under the Nuclear Non-Proliferation Treaty and by leading the nuclear weapons states to recognize the importance of — even to sign and to ratify — the Treaty on the Prohibition of Nuclear Weapons, which will enter into force Jan. 22.

The COVID-19 pandemic is pointing to our deepest calling as a human family: to nurture a world of mercy, compassion, justice and care for one another rooted in the universal ethic of nonviolence. Spending hundreds of billions of dollars annually on weapons and preparations for war has undermined our ability to address this global pandemic. In the midst of enormous suffering and upheaval, a global course correction for authentic, inclusive human security, beyond national security, is urgent.

This crisis may very well be what the late activist Bill Moyer called a trigger, a public event so shocking that it "dramatically reveals a critical social problem to the general public in a new and vivid way." Historically, "trigger events" have unleashed a deep longing for society-wide transformation, creating opportunities for major shifts in public perceptions and significant structural or systemic change.

U.S. President Joe Biden should listen with rapt attention to the pleading of Pope Francis, who in Fratelli Tutti called for an "alternative way of thinking ... a global ethic of solidarity and cooperation in the service of a future shaped by interdependence and shared responsibility in the whole human family."