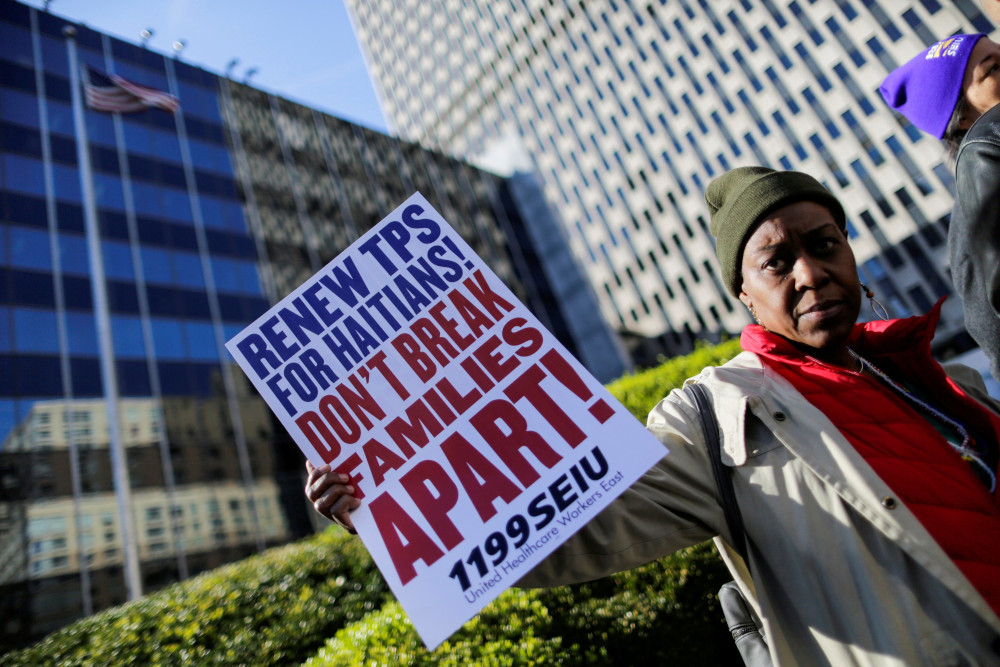 A woman in New York City holds a placard in support of Temporary Protected Status for Haitians in this 2017 file photo. On May 22, 2021, the Biden administration granted eligible Haitian nationals living in the United States the chance to apply for a new 18-month TPS designation. (CNS/Reuters/Eduardo Munoz)

Haitians with a special immigration status in the U.S. have been granted an extension so that they can continue to live and work legally in the country, or apply to do so.

On May 22, the U.S. Department of Homeland Security announced it was granting a new 18-month extension of Temporary Protected Status to allow Haitian nationals and "individuals without nationality who last resided in Haiti" the opportunity to file an application.

DHS said Haitians currently residing in the United States as of May 21 can file initial applications for TPS, so long as they meet eligibility requirements.

TPS grants a work permit and reprieve from deportation to certain people whose countries have experienced natural disasters, armed conflicts or exceptional situations so they can remain temporarily in the United States.

"Haiti is currently experiencing serious security concerns, social unrest, an increase in human rights abuses, crippling poverty, and lack of basic resources, which are exacerbated by the COVID-19 pandemic," said DHS Secretary Alejandro Mayorkas in a statement announcing the extension.

"After careful consideration, we determined that we must do what we can to support Haitian nationals in the United States until conditions in Haiti improve so they may safely return home," he said.

Catholic organizations hailed the decision, including the U.S. Conference of Catholic Bishops. On May 24, the chairmen of the bishops' committees on migration and international justice and peace issued a joint statement.

Auxiliary Bishop Mario E. Dorsonville of Washington, chairman of the Committee on Migration, and Bishop David J. Malloy of Rockford, Illinois, chairman of the Committee on International Justice and Peace, said the decision "acknowledges the serious challenges facing the island nation, including widespread violence, civil unrest, political instability, and food insecurity," as Haiti is widely recognized as the poorest country in the Western Hemisphere.

"The church in Haiti has been directly impacted by the unprecedented levels of gang activity — with targeted kidnappings of clergy, religious, and laypersons in recent months — adding to the need for an urgent response," the bishops said.

"We stand with our brother bishops in condemning the lawlessness, and we join them in their solidarity with victims," they said. "We urge the Haitian government and President [Jovenel] Moïse to act in the best interests of the Haitian people by respecting and upholding their rights and dignity.

"We also call on the Biden administration to address the desperate conditions plaguing the country through diplomatic and humanitarian measures."

The Maryknoll Office for Global Concerns, also in a May 24 statement, said that as the organization's missioners have witnessed the crises in Haiti unfold, Haitians deserved the legal protection granted.

"This decision will give a pathway for vulnerable Haitians to seek refuge in the United States while their nation seeks to heal from the multiple crises it is facing, including the ongoing global pandemic," said Susan Gunn, director of the Maryknoll Office for Global Concerns.

She said missioners have accompanied Haitian families affected by the "protests, economic disruption, school closings, roadblocks, violence and increasing poverty that have intensified in the last year."

"Many Haitians are indeed fleeing for their lives, and it is our moral duty to welcome them. We commend the Biden administration for moving forward with a redesignation of TPS for Haitians in the United States," she said.

"Haiti is currently facing increasingly dismal country conditions, including widespread violence, displacement, human rights violations and kidnappings," she said in a May 24 statement.

"Protecting people from being returned to these conditions is exactly why Congress created TPS, Gallagher said. "The decision is not only correct under the law, but also under morality and our duty to each other as human beings."