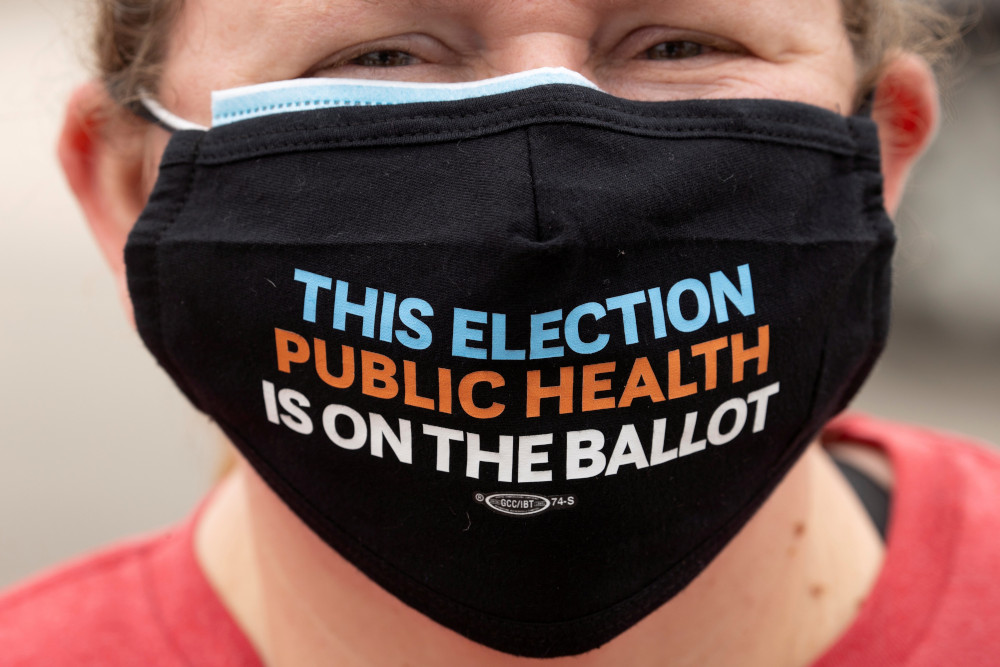 This election year, in the midst of a global pandemic and with the Affordable Care Act about to be challenged for the third time before a Supreme Court that is in flux, it's no surprise health care is a bigger issue than it has been in previous presidential elections.

The economy still gets top billing, followed by the coronavirus outbreak, which has killed more than 200,000 people in the United States and affects both health and economy.

Criminal justice, race relations and health care round out the list of top voter concerns, according to a September Kaiser Family Foundation poll. Democratic voters, according to the poll, place a higher emphasis on health as a voting issue than Republicans.

But Democrats also have shifted their health care emphasis from the early part of 2020, when it was a top concern, to this fall when it slipped behind concern for closed businesses and issues of racial justice. When voters were asked what parts of health care most concerned them, they listed costs of health insurance coverage and prescription drugs as top worries followed by the coronavirus outbreak and Medicare concerns.

The presidential candidates have widely differing health care platforms based on their hopes to either dismantle the ACA, as President Donald Trump has spoken of since the previous presidential election, or to keep it in place and expand it, which former Vice President Joe Biden advocates.

During the presidential debate Sept. 29, Biden and Trump sparred over health care with Biden criticizing Trump for his failure to repeal and replace the law and Trump saying: "I want to give them better health care at a much lower price, because Obamacare is no good."

The presidential candidates also had divergent views on the availability of a COVID-19 vaccine, with Trump questioning if the production had been slowed for political reasons and Biden saying he agreed with scientists on the turnaround speed.

Republican health care plans have been criticized for not offering safeguards to protect people with preexisting conditions. On Sept. 24, the president signed an executive order protecting these conditions, but health experts say these conditions are already protected under the ACA.

Both candidates have pledged to deal with rising drug prices. 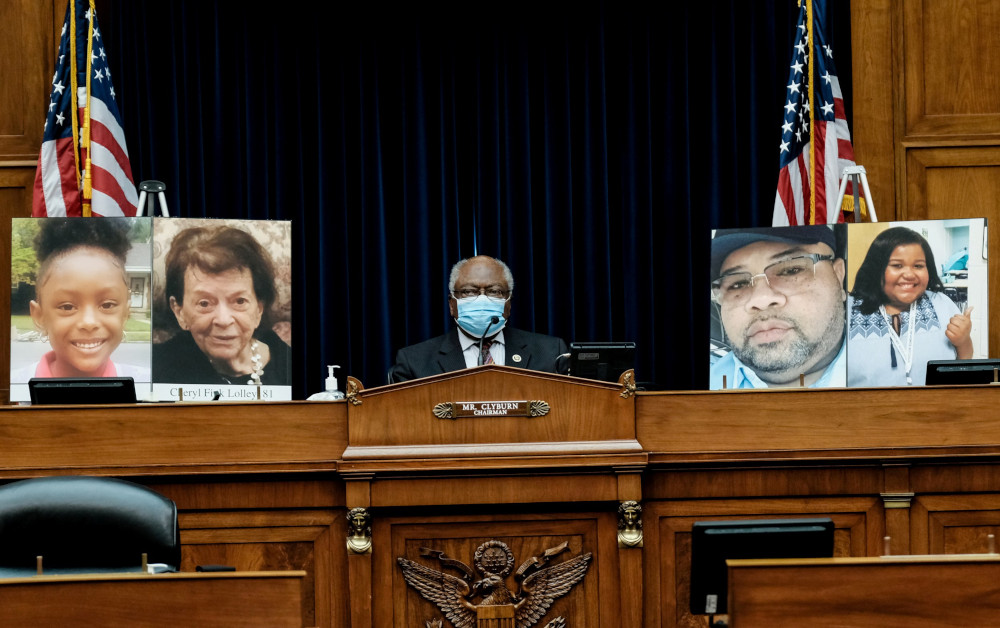 Rep. James Clyburn, D-South Carolina, subcommittee chairman, listens as U.S. Secretary of Health and Human Services Alex Azar testifies on Capitol Hill in Washington Oct. 2, 2020, to the House Select Subcommittee on the Coronavirus Crisis. Photos of people who died after contracting COVID-19, the disease caused by the coronavirus, are displayed on either side of the congressman. (CNS/Pool via Reuters/Michael A. McCoy)

The ACA, which became law in 2010 and was fully implemented in 2015, has been before the nation's high court twice before, in 2012 and 2015, and survived, but this time its fate is more uncertain particularly since the death of Justice Ruth Bader Ginsburg and the possible confirmation of Judge Amy Coney Barrett to fill her seat.

On Nov. 10, the court will hear oral arguments — in a case brought by 18 Republican state attorneys general and supported by the Trump administration — challenging the nation's health legislation.

As a judge for the U.S. Court of Appeals for the 7th Circuit, Barrett did not hear any cases dealing with the ACA. But in 2017, she wrote a paper in the Notre Dame Law School journal that was critical of Chief Justice John Roberts' majority opinion in the 2012 ruling saying he "pushed the Affordable Care Act beyond its plausible meaning to save the statute."

This article has raised red flags for those concerned that Barrett could vote to dismantle the law — if she is confirmed to the court in time to hear the case — but some legal scholars have said her writing doesn't necessarily reveal how she would vote on a case that centers on a different legal question.

The ACA, which provides health coverage for 20 million people in the United States, has slipped in public support in recent months. The Kaiser Family Foundation poll said 49% of U.S. adults viewed the law favorably in September compared to 55% in February. And 42% disapproved of it in September.

The Catholic Church has had a complicated relationship with the health care law. Catholic hospitals have long emphasized the poor and vulnerable must have access to health care, and the U.S. Conference of Catholic Bishops, in a 2010 letter to Congress when the law was enacted, stressed that health care is "a basic human right" and "universal coverage should be truly universal."

This specific part of the health care law once again came before the Supreme Court last term, when it voted in a 7-2 decision to uphold regulations put in place by the Trump administration to give employers more freedom to opt out of providing contraceptive coverage in their health plans for religious or moral reasons. 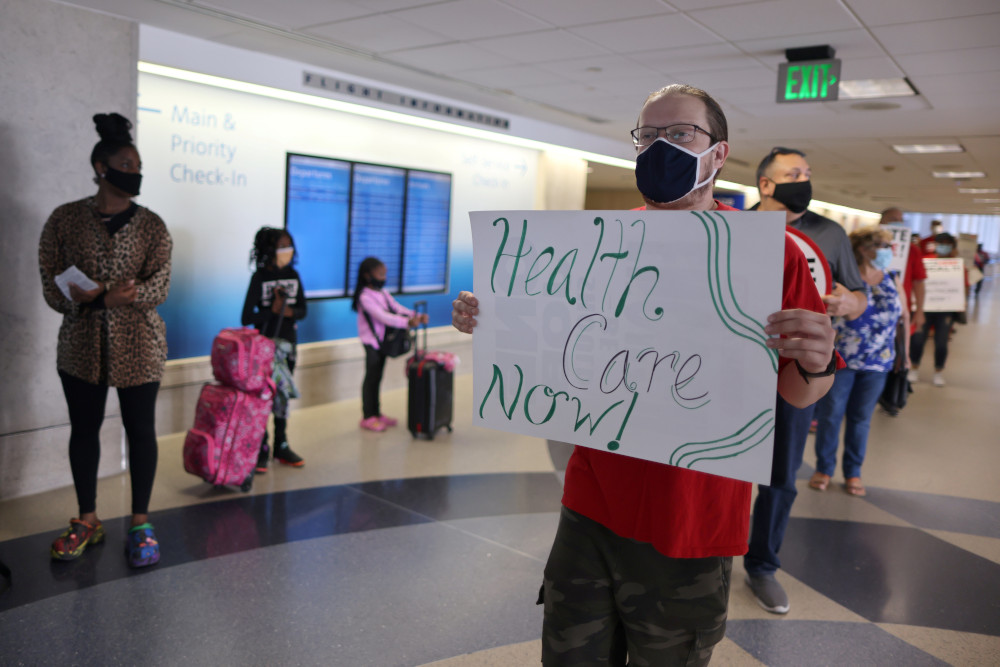 A person holds a sign as laid off LAX Airport workers protest for an extension of health care benefits by concessions companies in Los Angeles Sept. 24, 2020. (CNS/Reuters/Lucy Nicholson)

"Forming Consciences for Faithful Citizenship," the U.S. Catholic bishops' quadrennial document on political responsibility that guides Catholics on election decisions, states that "affordable and accessible health care is an essential safeguard of human life and a fundamental human right."

It notes that despite an increase in the number of people insured, "millions of Americans still lack health care coverage" which it describes as "an urgent national priority."

The document also says that the country's health care system needs to be "rooted in values that respect human dignity, protect human life, respect the principle of subsidiarity and meet the needs of the poor and uninsured, especially born and unborn children, pregnant women, immigrants and other vulnerable populations."

It also stresses that it supports measures to strengthen Medicare and Medicaid and advocates for effective, compassionate care for those suffering from HIV/AIDS or coping with addictions.

The Catholic Health Association, which represents more than 2,200 Catholic hospitals, nursing homes, long-term care facilities, systems, sponsors and related organizations in the United States, emphasizes that its top priority for legislative advocacy is for health care to be accessible and affordable for everyone.

On its website, the association commends the ACA for taking significant steps toward expanding access to health insurance coverage and improving the quality of health care, but it also said more work needs to be done on the law and they would "continue to work with Congress to ensure any legislative proposal preserves and expands access, affordability, coverage and quality within our health care system."

The group also said it was committed to protecting the legislation in its entirety by urging the courts to uphold the constitutionality of the law in Texas v. Azar, one part of the combined cases going before the Supreme Court in November.