How you get there 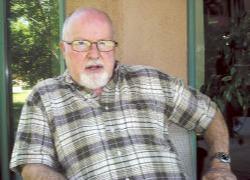 The latest installment: In Search of the Emerging Church

Albuquerque, N.M. -- If the notion of an emerging church first took root among Protestant leaders and thinkers who began asking questions and engaging in conversations that arched over denominational boundaries and old enmities, it is being nourished in part by the peculiarly Catholic tradition of contemplation.

"I am invited to teach contemplation more to ecumenical settings, evangelical churches and Protestant churches than any Catholic churches because they [Protestants] know they don't know," said Franciscan Fr. Richard Rohr, founder of the Center for Action and Contemplation and Action in Albuquerque, NM.

Rohr, member of the Franciscans' New Mexico Province, is a kind of one-man ideas industry, a prolific author and a much sought speaker around the globe. He has often mined the insights and wisdom of a range of academic disciplines as well as other religious traditions to advance new understandings of Christian faith and spirituality. In a recent interview at his center he described himself as a "popularizer," but that minimizes the breadth of his work. His questions regarding the future of religious institutions, including the Catholic church, as well as his extensive work with men's spirituality, are often on the forward edge of what eventually become broad discussions.

Indeed, Rohr believes that the contemplative tradition, the third of what he describes as four pillars of the emergent church and his point of entry into the discussion, is precisely the sort of tradition that allows one to see "with a different set of eyes" and perhaps shift the focus a bit.

The great mystics such as Teresa of Avila or John of the Cross, he said, "in their own way are saying that the lowest level of consciousness is 'either-or, us or them.' As you advance, you become more 'us and them,' not 'us or them.' You see things non-dualistically. That's going to be the more important thing that I would like to communicate, that really another word for contemplation is non-dualistic thinking.

Catholics, he said, were never taught they need "a different consciousness to understand the Gospel. That's my grand assumption in everything I'm doing anymore, which has become the teaching of contemplation."

Contemplation may be a new undertaking for Protestants, but the first pillar supporting the emerging church, according to Rohr, is "honest Jesus scholarship. Not a seminary-trained Jesus scholarship, where you begin with your conclusions -- Lutheran conclusions or Catholic conclusions or whatever they are -- and then you just learn an understanding of Jesus that's going to keep the Methodist church going."

The movement, he said, pulls on the recent "wonderful outpouring of honest Jesus scholarship from feminists, from black people, from poor people, from just honest even white, male scholars."

The second pillar is a rather broad recognition across denominational lines of the centrality of peace and justice issues to the ministry of Jesus. "They are much more front and center for Jesus than the issues that most churches make central, most of which he never talks about. For example, why did we make abortion and gay marriage the litmus test of whether or not you were Christian? Those were not the litmus tests for 1900 years. How come they are now? Where did this come from?

"I don't want to just make those two the issue, but it seems to me a classic example of smoke and mirrors," he said, "that we don't want to look at the issues that tell us to change our lives, our consumer culture, our greedy culture, our prideful culture, our wealthy culture from the papacy to the episcopacy to the priesthood and all the way down. We're such a part of the system we can't critique the system."

This sense of the central place given to peace and justice issues is so pervasive, he said, that there is a quiet consensus he perceives globally on the matter. "There's no central office anywhere teaching the Emerging Church Doctrine. That's what tells me this is from the Holy Spirit."

The final pillar is the one still most in process: "finding the vehicles for this kind of vision."

What kind of community structure, he wonders, will allow this to happen yet not be in competition with organized religion but instead be "complementary and happily on the side? This is what's happened to groups like us," he said, referring to the center. "Our conferences are bigger than ever in the last years. Why? I think people want to retain their Catholic identity" while pursuing a view and spirituality that encourages "integrative" rather than "oppositional" thinking.

A second conference on emerging church will be held here in April 2010, and the name of the movement is undergoing a shift to "Emerging Christianity." The title of the spring conference -- and here Rohr can't stifle a small chuckle -- is "How You Get There Is Where You Will Arrive."

One of the principal speakers during that first gathering was religion scholar Phyllis Tickle, author of The Great Emergence: How Christianity is Changing and Why, who writes that every 500 years or so major religious groups go through what she terms a "giant rummage sale," sloughing off encrustations that have distorted the original purpose and mission of such groups. Further, she said, during each of those periods of upheaval -- and she maintains that the Christian world, including Catholicism, is going through such a period now -- the central question becomes: Where is the authority?

For Protestantism, she said, that question was answered during the Reformation with the phrase sola scriptura, or scripture alone. For Catholics, the corresponding answer came during both Vatican Council I and Vatican Council II. The first answered the question with the doctrine of infallibility that placed ultimate institutional authority in the person of the pope; the second opened a host of new possibilities in seeking a greater degree of collegiality within the church and expanded roles for lay people.

Rohr agrees that "for religion to be religion, it always has to appeal to some kind of absolute or final authority. So the question of where does your authority come from, as Jesus is asked, is always going to be there. My intuition, and it might be totally wrong, is I think the new authority is going to come from nature or the cosmos, the natural world.

"I know when Catholics first hear that," he said, "it sounds new age-y, but it seems to me that's the primary Bible as the Franciscans believed."

That Bible, he said, has existed for 15 billion years "and has an inherent authority" reflected in Romans 1:20, 'God is revealed to things through the mind, to things as they are made.'"

The rediscovery today of the natural world, of "things as they are beyond our technology and mental constructs," will become the new authority "that we're going to be forced to appeal to, especially as we continue to destroy this planet, and we realize this is the one thing we all have in common: that we're all standing and eating off this same earth."

The natural world was an authority that appears to have been agreed upon by indigenous people around the planet, said Rohr. "We used to use the word in philosophy class: facticity. This is the 'what is.' We were always looking for the facticity. Here it is: These trees, this grass and that sky. How can you beat that for ultimate authority? This names what we all better be obedient to. … This is demanding obedience and a response from us far more than any mental construct from a pope or scripture."

It is the new cosmology that sees that the Bible was written in the "last nanosecond of geological planetary time. As I love to say to crowds: Do you really think God wasn't talking for the first 14 billion years or whatever it is? They get that. They really get that. Let's listen to this talking. As a Franciscan, I find that so rooted in our early experience, although we lost it, too."

For Rohr, the new cosmology also recognizes that the old conception of natural order, the up-and-down universe from which hierarchical examples of leadership are modeled, no longer applies.

"You just see Jesus paying no attention to that. Nowhere is it probably symbolized more graphically than in the Roman Catholic church, which has all these scriptures about the least of the brothers and sisters, and the little ones deserving the greatest care, when in fact, what we do is dress up the big ones. We idolize and quasi-worship the big ones."

If his critique of the church occurs at times at such a deep level, why doesn't he leave?

Rohr was disarmingly frank in describing his motives for staying, noting the rich rewards of his ministry, and in his thoughts about priesthood and the strain of remaining a priest amid the tension of his own questions.

"I've had more -- forgive me for using the word -- success than I ever deserved or had a right to, so my ego has been padded and fed, too. So I don't want to make it anything heroic. I've had more success than anybody deserves in response, warm accolades and so forth.

"So, given that, given the structural freedom and protection that the Franciscans gave me, I just was always able to do what I wanted to do and needed to do. I would be stupid to leave. Now, if they kicked me out, if they threatened me with suspension, I'd have to say it wouldn't be a great crisis for me. I know that. I'd be relieved not to have to put on priest's robes and pretend to believe all the things that they say they believe. I'm not a disbeliever, so I'm not saying that from an agnostic place, but from this repeating of clichés and repeating of words that mean belief. I'd be relieved in a certain way if I didn't have to be a priest.

"However, I've been so protected and able to do it in what I hope is a Gospel way that I'd be foolish to leave. How many people have had the access that I've had to so many countries, to so many different groupings? All I can do is get on my knees and thank God. It would have been arrogant of me to leave.

"The other piece is, in fairness to the Catholic church, that it was good Catholic theology that gave me the authority and self-confidence to talk the way I talk. Catholicism made me who I am. It's ironic and here I end up being very critical of much of Catholicism, and yet, Catholicism gave me the key to unlock that from inside and not outside.

"It's all there. Catholic theology, when it's good, is really good. It's incarnational. It's inclusive. It unlocks itself from inside. It's capable of self criticism. But it is such a small percentage that ever gets to that, it seems."

How you get there