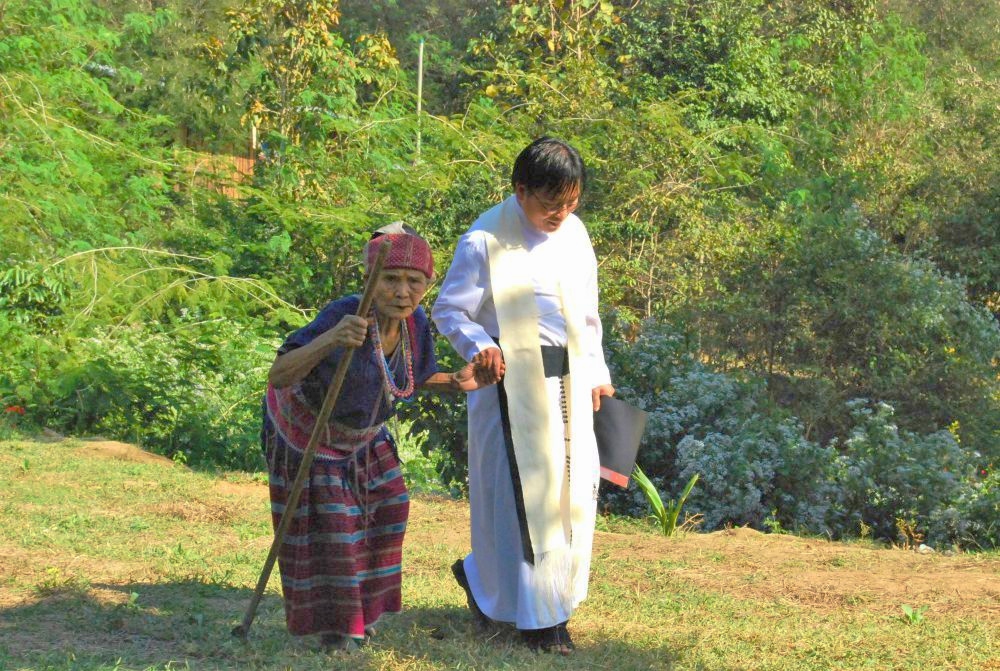 A Hmong missionary priest from Thailand has found that ministry to the hill tribe people in a midtown Milwaukee parish, home to new immigrants and refugees, is not that much different from his church work with hill tribe people in his home country's mountainous region.

The difference might be more on the "pastoral style and setting," not the "substance," says Redemptorist Fr. Chakrit Micaphitak. Otherwise his ministry would be the same, namely: doing home visits and home blessings, visiting elderly people and the sick, and celebrating Mass, hearing confessions and presiding at weddings, he said. The people he ministers to here are basically "khon doi," or hill tribe people, mostly refugees from Myanmar and Laos.

Khon doi is a Thai term used to identify various ethnic groups such as Hmong, Karen, Akha, Lahu, Lisu and Shan, who live mostly in the mountainous northern and western regions of Thailand. Some of these ethnic groups, including Karen, Hmong, Chin, Kachin and Karenni also lived across Thailand's border in Myanmar and Laos. In Myanmar, some of these ethnic groups aspired to be independent. The Myanmar government is opposed to independence, and violent conflicts ensued against the rebels in the 1980s and 1990s. As a result, hundreds of thousands of Karen, Kachin and Karenni fled to Thailand as the government used force to suppress the separatist rebel groups. Many older refugees shared stories of their homes being burned down, forced relocation, rape and killing. They lived in camps in western Thailand. Tens of thousands were later resettled in the United States. 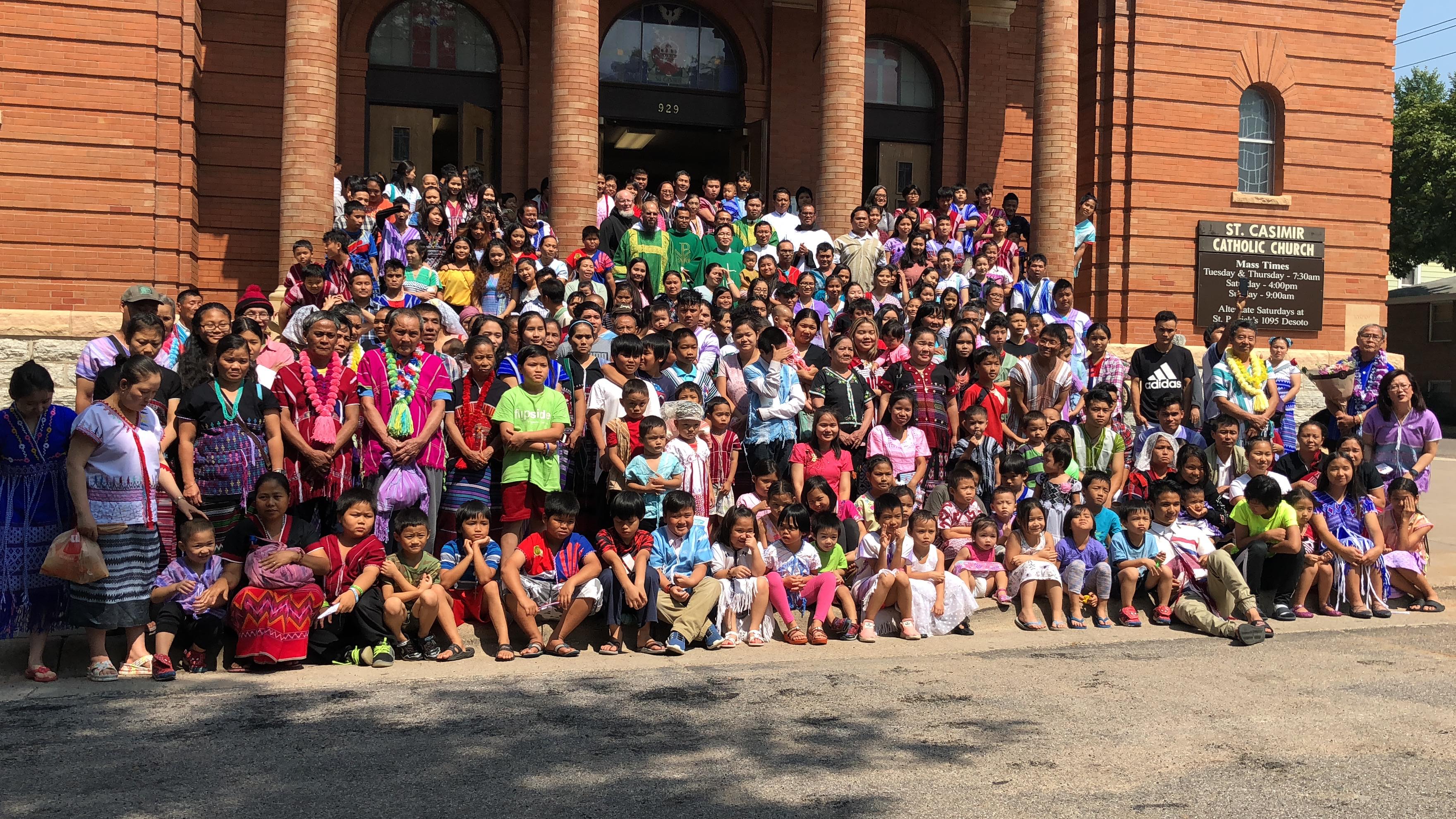 "Here at St. Michael's Parish in Milwaukee, I minister to recent refugees like Karenni, Karen, Kachin and Chin from Myanmar, and former refugees like the Hmong and Lao people who were resettled here in the 1980s," said the priest who speaks Thai, Lao, Hmong, Karen and English.

Kwa Po and his family fled violence in Myanmar and were living in a camp for Karen refugees in Thailand's western province of Mae Hong Son for many years. His family was sponsored and resettled in the U.S. in July 2011. Now one of the pastoral associates at St. Michael's, Po said Chakrit ministers to young people, adults and the elderly. He visits the sick in hospitals and the elderly in their homes. Po said he has learned from Chakrit both in faith formation and Karen cultural practices. The priest is kind and patient with the people, said Po, 40 and the father of six children.

Chakrit said that priesthood was not his first call. He wanted to be a Buddhist monk when he was young. He recalled that an American missioner, Redemptorist Fr. Harry Thiel (1930-2006), came to visit the Hmong people in his village in Nan Province. Thiel was known as the pioneer of the hill tribe ministry. He worked with Hmong people in Thailand's northern provinces through the Hmong Catholic Center that he founded in 1975 in Chiang Mai. 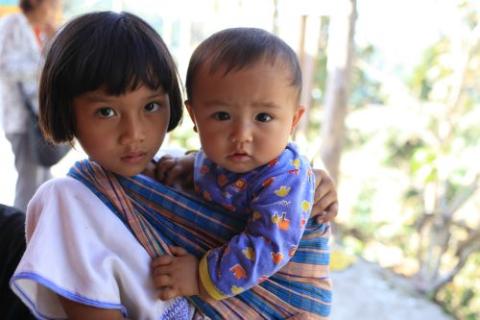 At that time in the mid-1970s, there were only two Catholic families in his village. Chakrit said his dad was a convert, and that Chakrit was not baptized until he was 7 years old. He said his dad would always say the Mass prayer "Holy, Holy, Holy" at bed time. "For some reason, I was inspired by the God of the universe in that prayer. I still say that prayer at bed time," Chakrit said.

He said he was also impressed with Thiel because hill tribe people are among the "most abandoned," and the American priest would visit the Hmong wherever they lived despite the difficulties of travels. He wanted to bring people to God. Chakrit said Thiel was the first person who made him think of becoming a Redemptorist priest. "He was a true missioner. Despite all the challenges and difficulties in working with the Hmong people in the mountains, he went to visit them. It was reported that he had baptized some 5,000 Hmong. I wanted to be a missioner like him, working with people who are on the margins."

When he told Thiel that he wanted to be a priest, the American priest said no at first, as young Chakrit was a recent convert. But Thiel asked him to stay at the Hmong Center in Chiang Mai where he could work as a catechist, which he did for four years. Eventually, he was sent to the Redemptorist seminary and was ordained a priest on Nov. 23, 2006. "After my ordination, my first appointment was ideal. I was assigned to work with the hill tribe people in the mountains, where there are no schools for children. The parents are mostly slash-and-burn farmers who grow rice, corn and vegetables. They also raise buffalos, cows, chickens and pigs. All the farm productions are for their own consumption," he added. 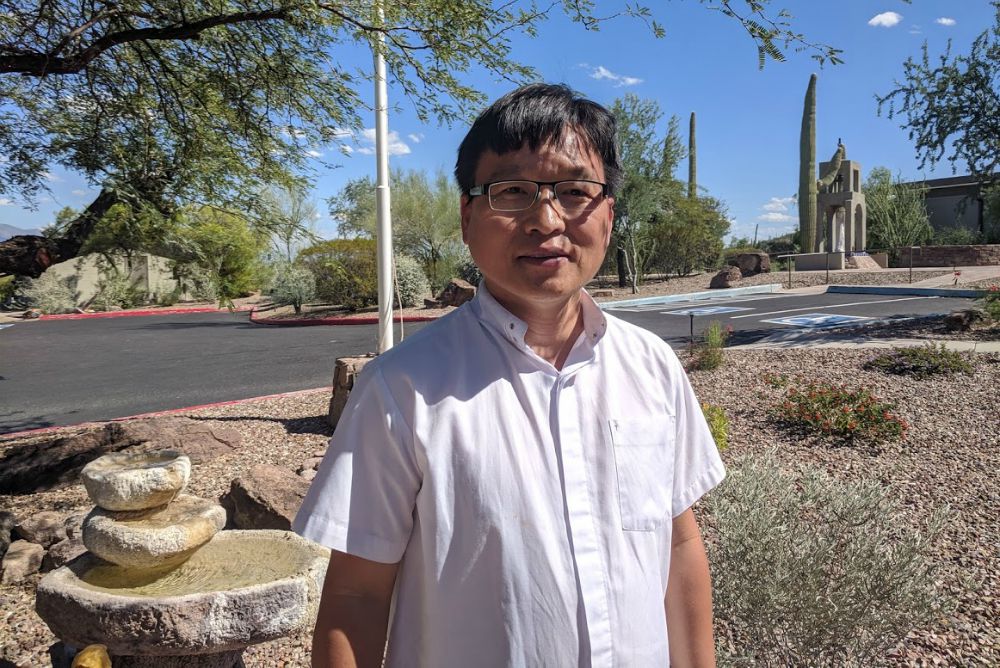 He spent most of his priestly ministry with other Redemptorists in the mountainous provinces of Chiang Mai, Chiang Rai, Phayao and Mae Hong Son. In his last parish of St. Patrick's in Mae Chaem, Chiang Mai, he had to take care of 17 villages with more than 2,000 Catholics. Some villages he could say Mass only seven or eight times a year because of impassable roads, especially in the monsoon season. In 2016, he did a sabbatical in Chicago. That year, he visited Milwaukee to see the Hmong people at St. Michael's. Chakrit said the vicar general of the Milwaukee Archdiocese invited him to work in his archdiocese, saying it is God's work whether it is in the mountain villages in northern Thailand or in Milwaukee.

Milwaukee is home to new immigrants and refugees from around the world. It is believed to have the largest number of Rohingya refugees in the country.

In January 2018, he accepted the invitation to minister to the Karen, Karenni, Hmong and Lao in Milwaukee. "The reason I accepted the invitation was because as refugees, I saw them like sheep without a shepherd. They escaped for their lives from their homeland in Myanmar. In a way, they were like lepers — nobody wanted to see or associate with them. They were ostracized and abandoned."

There are two Hmong Catholic priests in the United States. One is Chakrit, and another is a U.S.-born Hmong priest who was ordained for the St. Paul-Minneapolis Archdiocese. 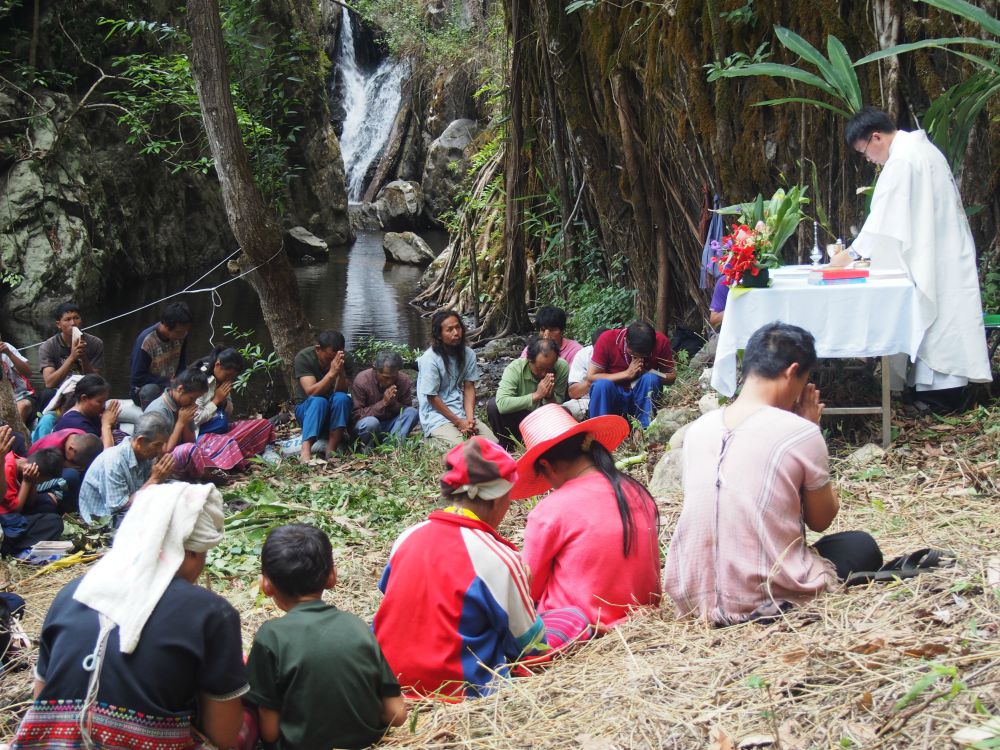 Redemptorist Fr. Chakrit Micaphitak celebrates a Mass of Thanksgiving for God's creation near a river in a village in Thailand. (Provided photo)

He said at St. Michael's there are some 70 Hmong families, 45 Karen families, 45 Karenni families and 20 other ethnic families. When he first started his work, he discovered that elderly people loved to attend group picnics or similar social activities. They like to come together to talk and reminisce about their life in the past. Chakrit said social connection is easier in a village than in the city. In a village, they just walked down the road and talked with their neighbors. The elderly here do not typically drive, so they depend on family members to get them around.

Chakrit said it has been a learning experience in pastoral care in the city. "Going to work is like going to an office. When people want to see me they have to make an appointment." As priests have to follow the diocesan safe environment policy, they have to be attentive in contact with children and adults. By being careful, he said he feels "disconnected" from the people.

Regardless of the differences in the city or village life, he recalled a Gospel story that guides him. "The lepers sought healing from Jesus. In a way, the hill tribe people also sought love and healing from God. As a Redemptorist, I also want to help my hill tribe people to recognize their own dignity as human beings."

Charity Sr. Alice Thepouthay, pastoral associate for the Lao at St. Michael's parish and director of the Lao Pastoral Center, said she understands the challenges of a foreign-born priest working in the U.S. office parish setting.

She said the Hmong priest has made an imprint on the people. When the people asked him to visit the sick and the elderly, he went. When they asked him to come and pray or bless their homes, he went. When the young people had an event, he also participated. When a Karen person died from cancer and he got a call at one o'clock in the morning to come and pray with the family, he got up and went to pray with them.

Thepouthay added that it is "a comfort for the older Karen people to go to confession to a priest who can speak their language. On Sunday, he gave a homily in three different languages — to the English community, the Karenni community and the Lao community. He also says Mass in Hmong for the Hmong Catholics. Being new in this country, he has made adjustment to the pastoral care practice. He has done a wonderful job."

Deacon Moualee Thao of St. Michael's also agreed with Thepouthay that Chakrit "has gone out of his way to respond to the pastoral needs of the people." The Hmong deacon, who was resettled in the United States in 1979, said more and more Karen, Karenni and Kachin have moved to Milwaukee because their family members were here. This is a reason for a typical second wave of migration, said Thao, who moved to Milwaukee from Des Moines, Iowa. With the increasing number of people, Thao is concerned of the health of the Hmong priest because he does not say "no." Thao wants Chakrit to "slow down" and to "take care" of himself as well.

[Peter Tran is assistant director of the Redemptorist Renewal Center in Tucson, Arizona.]

Read this next: Lao Catholic community celebrates 'Ancestors of the Faith'