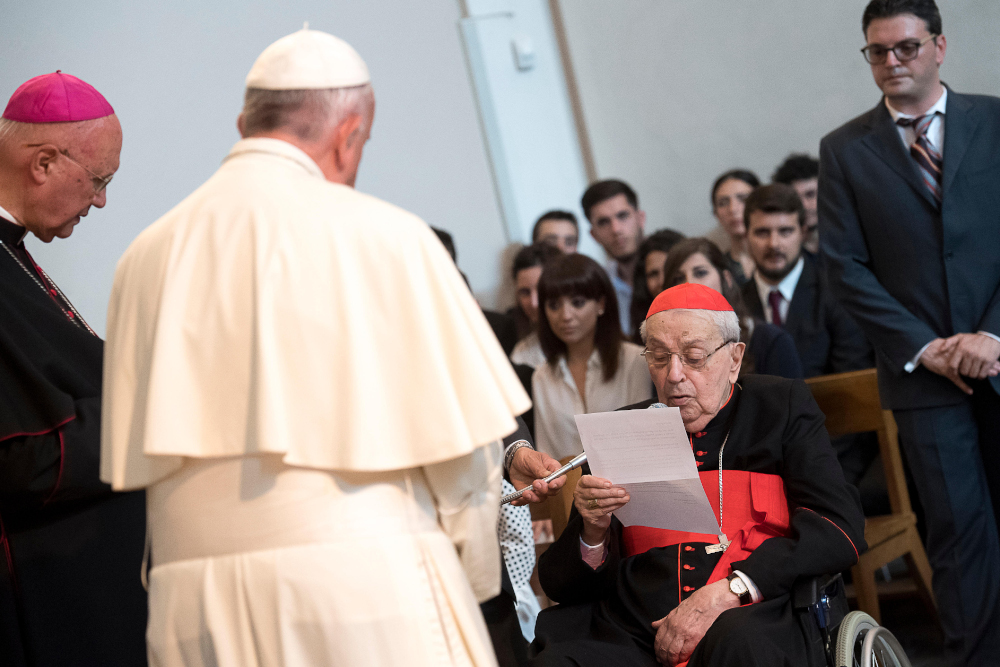 Cardinal Achille Silvestrini, who died Aug. 29, 2019, at the age of 95, is seen greeting Pope Francis in June 2016 when the pope visited Villa Nazareth, a residence and community for university students. The cardinal was president of the foundation that sponsored the villa. (CNS photo/Vatican Media)

Cardinal Achille Silvestrini, former prefect of the Congregation for Eastern Churches and a longtime Vatican diplomat, died at the age of 95.

According to Vatican News, Silvestrini died Aug. 29 in Rome.

Born in the northern Italian city of Brisighella, he was ordained a priest in 1946 and subsequently received doctorates from the University of Bologna and the Pontifical Lateran University in Rome before entering the Pontifical Ecclesiastical Academy, which provides training to priests for eventual service in the Vatican diplomatic corps.

As a member of the Vatican diplomatic corps, he focused on international issues concerning Vietnam, China, Indonesia and Southeast Asia. He also accompanied Cardinal Agostino Casaroli, then-Vatican secretary of state, to Moscow in 1971 to deliver the Holy See's adhesion to the Treaty on the Non-Proliferation of Nuclear Weapons. 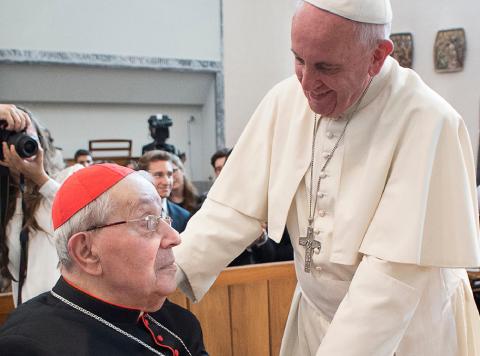 Pope Francis greets Cardinal Achille Silvestrini in this June 18, 2016, file photo. The cardinal, former prefect of the Congregation for Eastern Churches and a longtime Vatican diplomat, died Aug. 29, 2019, at the age of 95. (CNS photo/Vatican Media)

In 1979, he was named by St. John Paul II as secretary of the former Council for the Public Affairs of the Church, now known as the Section for Relations with States. As secretary, a position equivalent to foreign minister, he represented the Vatican on diplomatic missions to various countries, including Spain, Malta, Argentina, Nicaragua, El Salvador, Poland and Haiti.

He was created a cardinal in 1988 and named prefect of the Apostolic Signatura, the Vatican's supreme court, where he served until 1991 when St. John Paul appointed him prefect of the Congregation for Eastern Churches.

During his time as prefect, the Vatican called upon Silvestrini's diplomatic experience in areas of tension, particularly in the Middle East. In May 1993, he led a Vatican delegation to meet with former Iraqi President Saddam Hussein.

He urged Hussein to make signs of goodwill and fulfill U.N. resolutions in order to ease economic restrictions imposed upon Iraq following the Gulf War. Silvestrini served as prefect of the Congregation for Eastern Churches until 2000.

His death leaves the College of Cardinals with 215 members, 118 of whom are under the age of 80 and therefore eligible to vote in a conclave.