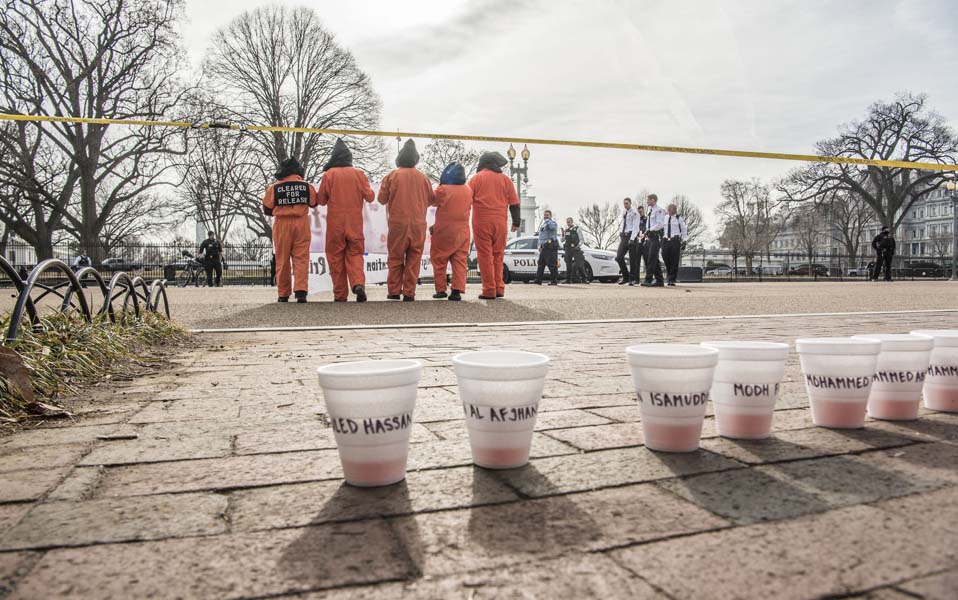 WASHINGTON — Five activists — Beth Adams, Ken Jones, Manijeh Saba, Helen Schietinger, and Brian Terrell — were arrested during a Jan. 11 rally at the White House in support of closing Guantanamo, according to a press release from Witness Against Torture, one of the event's sponsors along with the Dorothy Day Catholic Worker.

The five Witness Against Torture members who were arrested were meant to represent the five men who have been cleared for release but are still being held in the U.S. detention center along with 36 others, many of whom have never been changed with a crime.

According to the press release, attendees included "human rights activists, attorneys, ex-military investigators, faith leaders, and torture survivors." They were there to mark the 16th year of operation for the Guantanamo prison.

On the same day, the Center for Constitutional Rights filed litigation on behalf of 11 men held at the prison, challenging the legality of "arbitrary and indefinite detention at Guantanamo," especially in light of President Donald Trump's stated intent not to release any of the men and his threats to bring back torture.

The protest was part of a "Fast for Justice" that began the morning Jan. 8 and was set to end Jan. 13.

DES MOINES, IOWA — The state of Iowa will pay a $50,000 settlement to resolve a lawsuit with activists who alleged that Iowa and the World Food Prize violated their freedom of speech by confining their protest of the prize to an area out of sight and sound of the entrance to the event, according to a Jan. 10 article in the Des Moines Register.

The protesters, who include Des Moines Catholic Worker Frank Cordaro, New York pastor William Talen and Iowa resident Sharon Donovan, expressed concerns about environmental issues and genetically modified organisms at their protests of the event, which takes place at the Iowa Capitol.

The settlement, which was approved Jan. 9 by the Iowa Appeal Board, also includes an agreement of where protesters may gather at future events.

WASHINGTON — Seven people were arrested after a group of about a dozen protesters held a sit-in in House Democratic whip Steny Hoyer's office Jan. 11, demanding to meet with the congressman about the situation in Yemen, the Baltimore Sun reported Jan. 11. 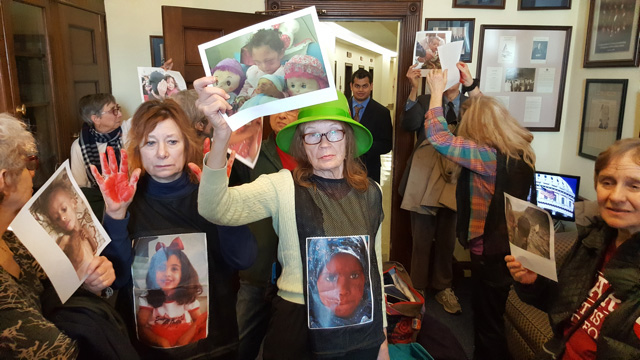 Protesters including (left to right) Janice Sevre-Duszynska, Mary Eleisar, and Alice Sutter participate in a sit-in in House Democratic whip Steny Hoyer's office to call attention to the crisis in Yemen. (David Bradbury)

Some of the protesters had their hands painted red and they carried pictures of children from Yemen, which faces a humanitarian crisis due to bombings and famine. When told Hoyer was unavailable, the group declined a meeting with a staffer and refused to leave the building when it closed. They were charged with unlawful entry.

According to a press release from the group, the protesters planned to stay in the office until Hoyer agreed with their demands: "That he speak out against Saudi war crimes, condemn any further arm sales to the Saudi-led coalition" and help "ensure a debate about unauthorized U.S. war against Yemen" by bringing House Resolution 81 to a vote.