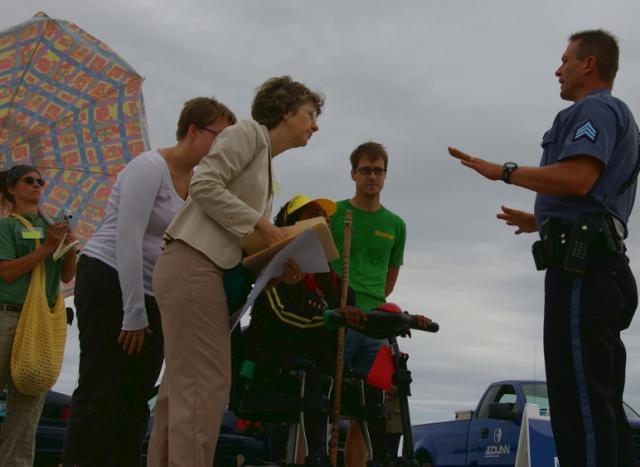 A Kansas City, Mo. police office warns activists blocking buses at the construction site for the new Kansas City, Mo. nuclear weapons plant Sept. 8 that they will be arrested if they do not move.

The acts of civil disobedience came six days after Bishop Robert W. Finn of the Kansas City-Saint Joseph diocese released a statement asking officials to reconsider the construction of the new plant and three weeks after 14 activists were arrested at the same site for a separate nonviolent peace action.

Stepping in front of buses carrying local, state and federal officials, activists halted the flow of people into the official ceremony for a few minutes as police gathered to arrest those who would not get out of the way and let the buses continue to move.

Reading from Finn’s statement to the 70 activists gathered at the site, Jude Huntz, director of the diocese’s human rights office, said the continued creation of nuclear weapons poses a "grave moral danger."

"Let us make a decision for all of humanity," Huntz read from Finn’s statement, "that one day this facility may be transformed from a producer of weapons into a producer of goods that benefit all mankind."

In a tented area away from the activists, the official groundbreaking ceremony continued despite the disruption. Opened with a performance by a local high school marching band and a presentation of colors by a Boy Scout troop, the event included speeches by four members of the Missouri congressional delegation and climaxed with a ceremonial shoveling of dirt at the construction site.

Speaking to those gathered at the official event, Democratic Congressman Ike Skelton said that the new nuclear facility would become a "solid part" of the country’s system of nuclear deterrence.

"National security is important; it’s the bottom line of what we’re all about," Skelton said. "What is done at this plant will help keep us secure, safe and free."
Republican Sen. Kit Bond told attendees that construction of the new facility would ensure economic growth for the local area by providing "approximately 1,500" construction jobs.

"Projects like this help ensure economic stability in dangerous times," Bond said. "[The plant] should be a good boost for the Kansas City area for many years to come."

Also speaking at the event was Terry Dunn, president and CEO of JE Dunn Construction Group. Responsible for building the new facility, family-owned JE Dunn is known locally for its generous contributions to charity and its ties to Catholic organizations. Members of the Dunn family have served on diocesan development councils in the past.

Speaking to NCR after the event, Dunn said that while the Finn’s statement may reflect the bishop’s vision and hope for the future, it doesn’t reflect current reality.

"With dozens of countries who are armed with nuclear weapons, including rogue nations … we believe this [plant] is an appropriate deterrent to allow us to hopefully live in peace," Dunn said.

Currently a part of the Bannister Federal Complex, located about 13 miles south of the city’s downtown area, the Kansas City Plant is responsible for the production and assembly of approximately 85 percent of the nonnuclear components for the U.S. nuclear arsenal. The plant is set to be relocated beginning in 2012 to the new facility farther south.

The National Nuclear Security Administration, a division of the U.S. Department of Energy, has said the new facility will carry an estimated price tag of $673 million for construction and $1.2 billion over the next 20 years.

Editor's Note: For more photographs from the event Sept. 8 take a look at the slideshow below.

Nuns on the Bus tour returns to Ohio